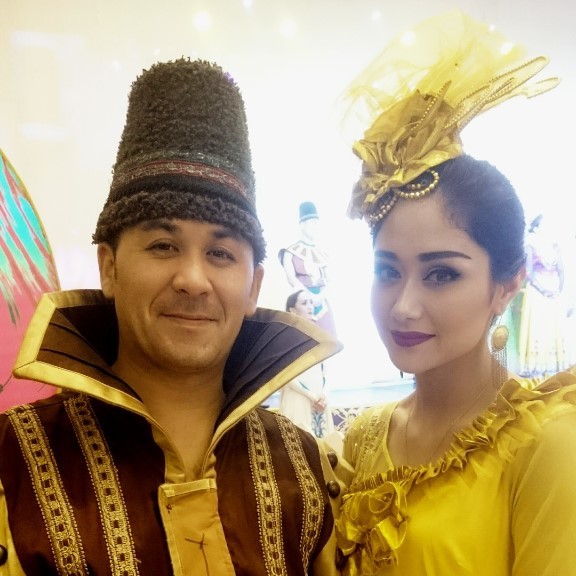 I’m not as young as I was. 6 days of travelling, climbing, hiking, camel riding and kipping on hard sleeper trains have left me tired with aching knees and Achilles tendons. I’ve travelled down the Hexi corridor into the far western province of Xinjiang.  Its China’s largest and least populated province. Famous for its dried fruit, its wine and more recently, news reports about the trouble there. Comments from Chinese colleagues about the dangers, news reports of the banning of beards, the quiet complaint of a local Uyghur person about travel restrictions, his concern about me repeating what he said and what I post on line, are all fresh in my mind.

Turpan is the first stop. A small city whose vineyards are watered by the ancient Karez tunnels, an ingenious 5000km network of underground canals that channel water from the Tian Shan mountains. The road from the train station is surprisingly unmade and we speed along a dry dirt track, stony and pot holed through an arid featureless landscape. Because we are so far west, dawn is nearly 2 hours late and the sun is low on the horizon, glowing through the clouds of dust thrown up by a large lumbering truck ahead. Occasionally, we stop at check points where armed police examine IDs – they’re not interested in mine.

Despite the weariness, another day’s sightseeing straight from the station is arranged booking the taxi driver for the day at 450rmb.

We visit the ruins of Yar city first, impressively crowning a pillar of land cut away on three sides by a shallow sprawling river. The city, another UNESCO heritage site, is densely packed with mud walled remains. At the entrance, before the obligatory shuttle bus, is a reconstruction, which although exaggerates the mud, sets the scene nicely for the ruins. We wander around the site which is wonderfully undeveloped, no accompanying music, no reconstruction or tacky souvenir shops.

Later, our driver takes us to a local restaurant for lunch, a spicy bowl of noodles and naan bread served on an open roof top. Then we visit an old Uyghur village. It’s partly abandoned, partly set up for tourists, but the presence of beat up motor vehicles and villagers going about their day adds life to the scene and prevents it feeling like a museum. 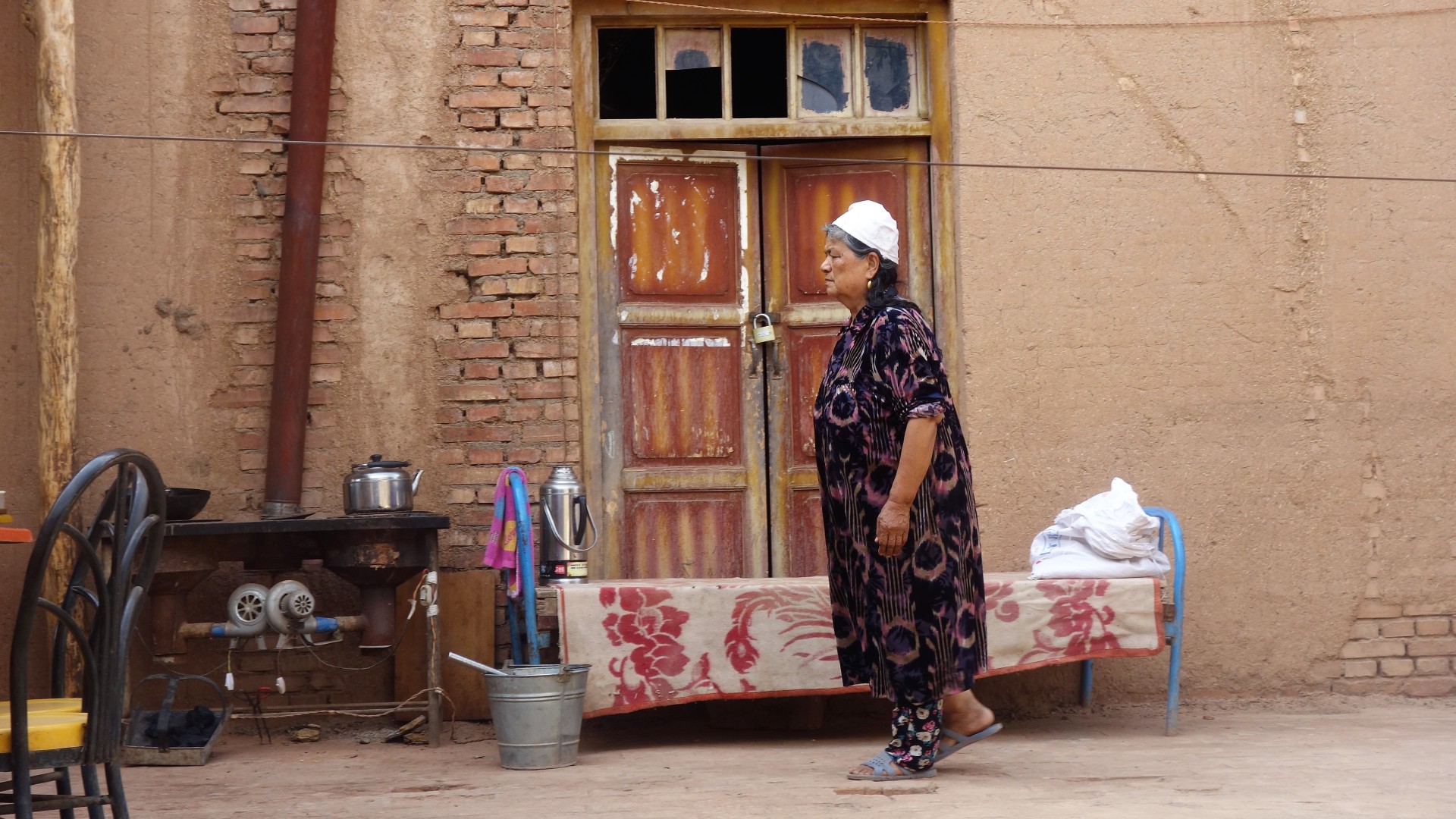 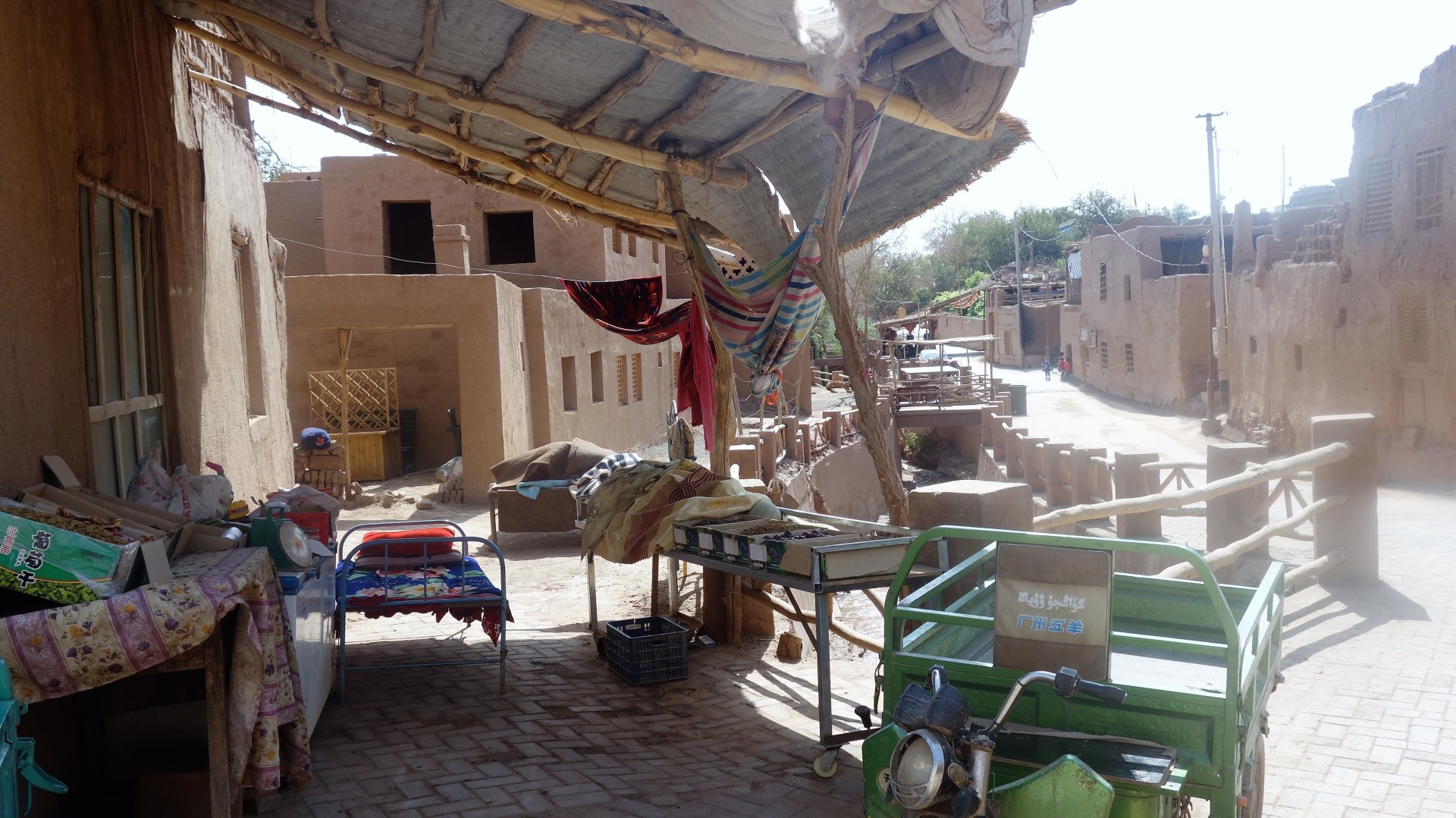 There is little sign of new construction and I imagine it’s largely genuine. Following the trip to the ruins of Yar, this village, also constructed from mud, feels like a continuation of history, a living link with a past often absent in China. 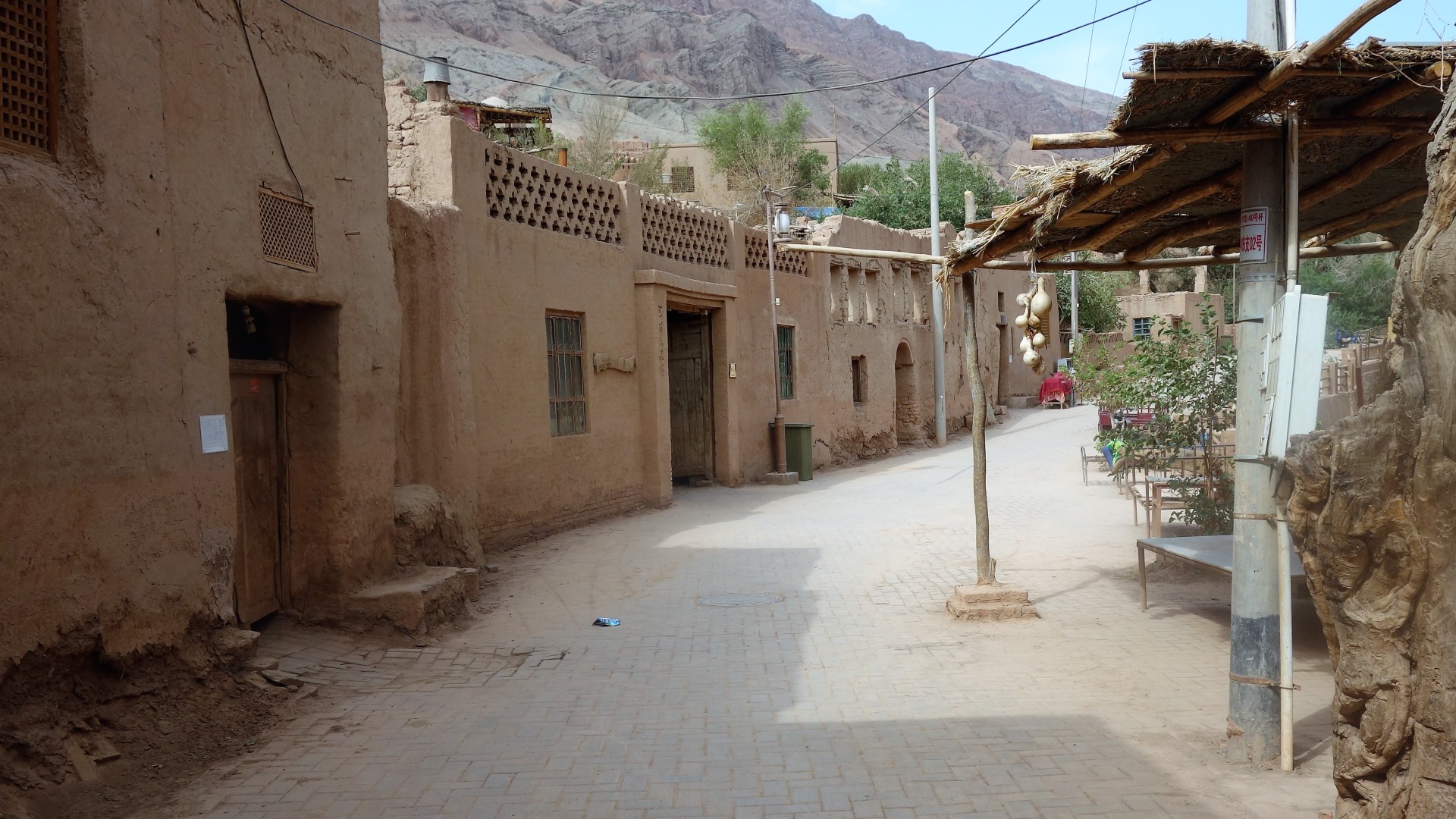 I’ve had enough by now, but we have a few more hours and the driver is keen to show us The Flaming Mountain. This famous landmark features in the story ‘Journey to the west’ and is the highest point in an area 500 meters below sea level, the second lowest point on earth.  I thought I’d seen enough of mountains and deserts, but was impressed once again by the view. On the way to Xinjiang I’d seen the barren rocks at Zhangye and the mountainous sand dunes at Dunhuang. Here was a mountain turning into sand. The top is solid and craggy, poking out from a cone of unbroken smooth pale powder. There is no rain here, no gullies carved by streams pouring down its slopes, just the flat even slope of the eroded rock. A local entrepreneur, taking advantage of the literally baking ground, is selling eggs cooked hard in the material. All the breaking down is from the extremes of temperature – the freezing winter and searing summers. I eased my aching frame back into the car and we drove away from this reminder that all things, eventually, turn to dust. 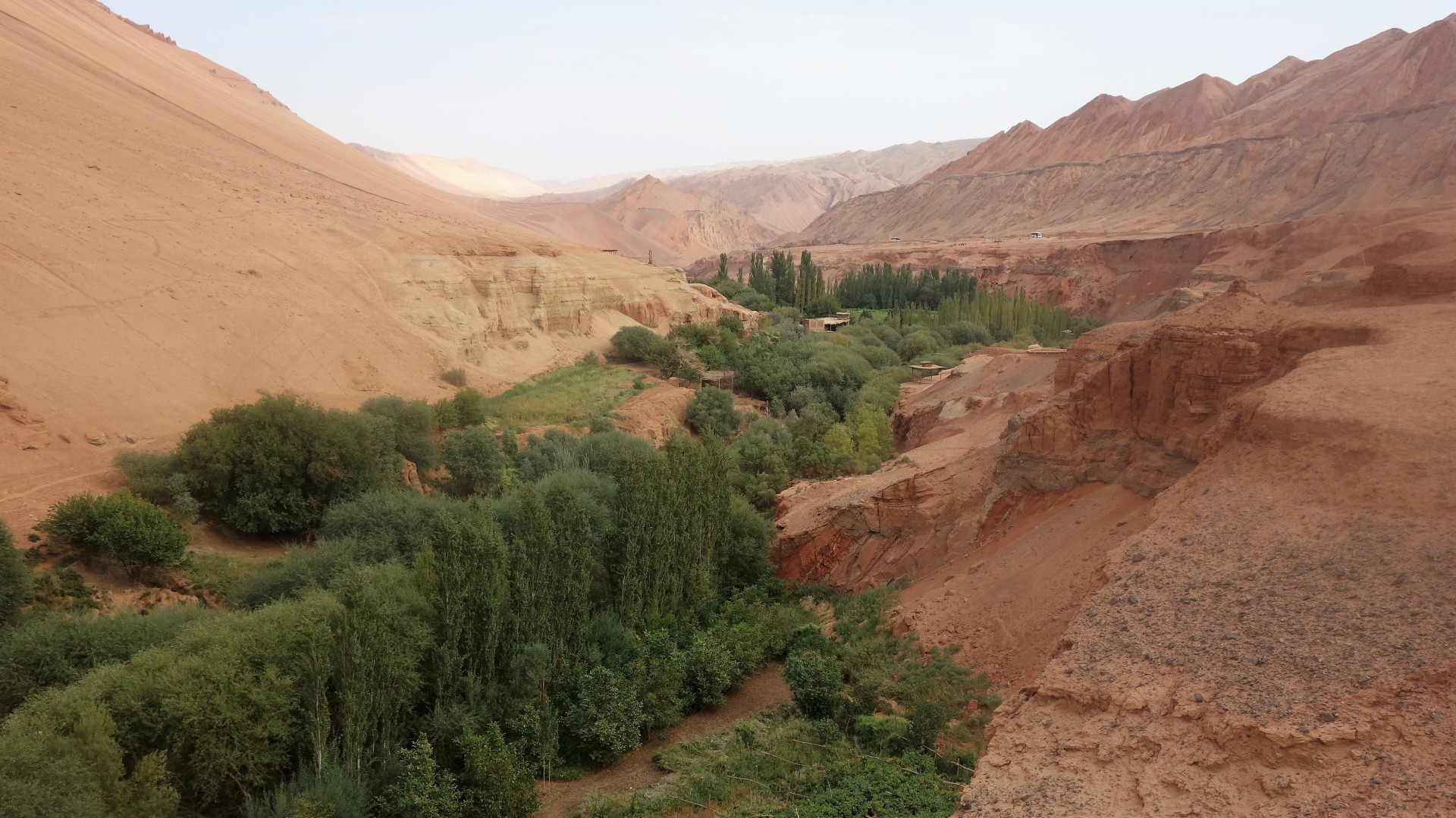 The silk road splits after Turpan, one route going west toward Azerbajan and the southern route, skirting the Taklamakan desert, to Kashgar.

The number 1 must see in Kashgar is the Sunday animal market; the largest in Asia. Here camels, horses and other livestock are bought and sold as they have been for centuries. We planned to go there straight from the station, but the overnight train from Turpan was 6 hours late so we didn’t arrive till the afternoon. Disappointing, but on the flip side, the extra 6 hours relaxing on the ‘Star of the south ‘ was welcome after a night of repeating tannoy announcements, babies crying and cell phones ringing.

Arriving in the afternoon meant, for once, going straight to the hotel. The Sultan Hotel is one of the nicest rooms I’ve stayed in.  Centre of the city and decorated with solid wood furniture, tasteful fabrics and scattered with cushions and old-fashioned lamps. Of course, no light bulbs, but the overall impression was expensive for what was a cheap stay.

The heightened security is very noticeable here with bag x-rays, body scans and ID checks at entrances to most public places, including parks, hotels, shopping malls and the night market. Even buses require a bag search before boarding. Of course, if the bag is carried by a foreigner then a casual wave of the magic detector wand is sufficient. If the ID shows the person is Uyghur then even more scrutiny may be given. At some places, there are separate queues for Uyghur people.

The highlight of Kashgar is the old city behind the Id Kar mosque, the largest in China. It’s a warren of old Arabic buildings their pink and creamy walls and pale wood windows beautifully maintained. 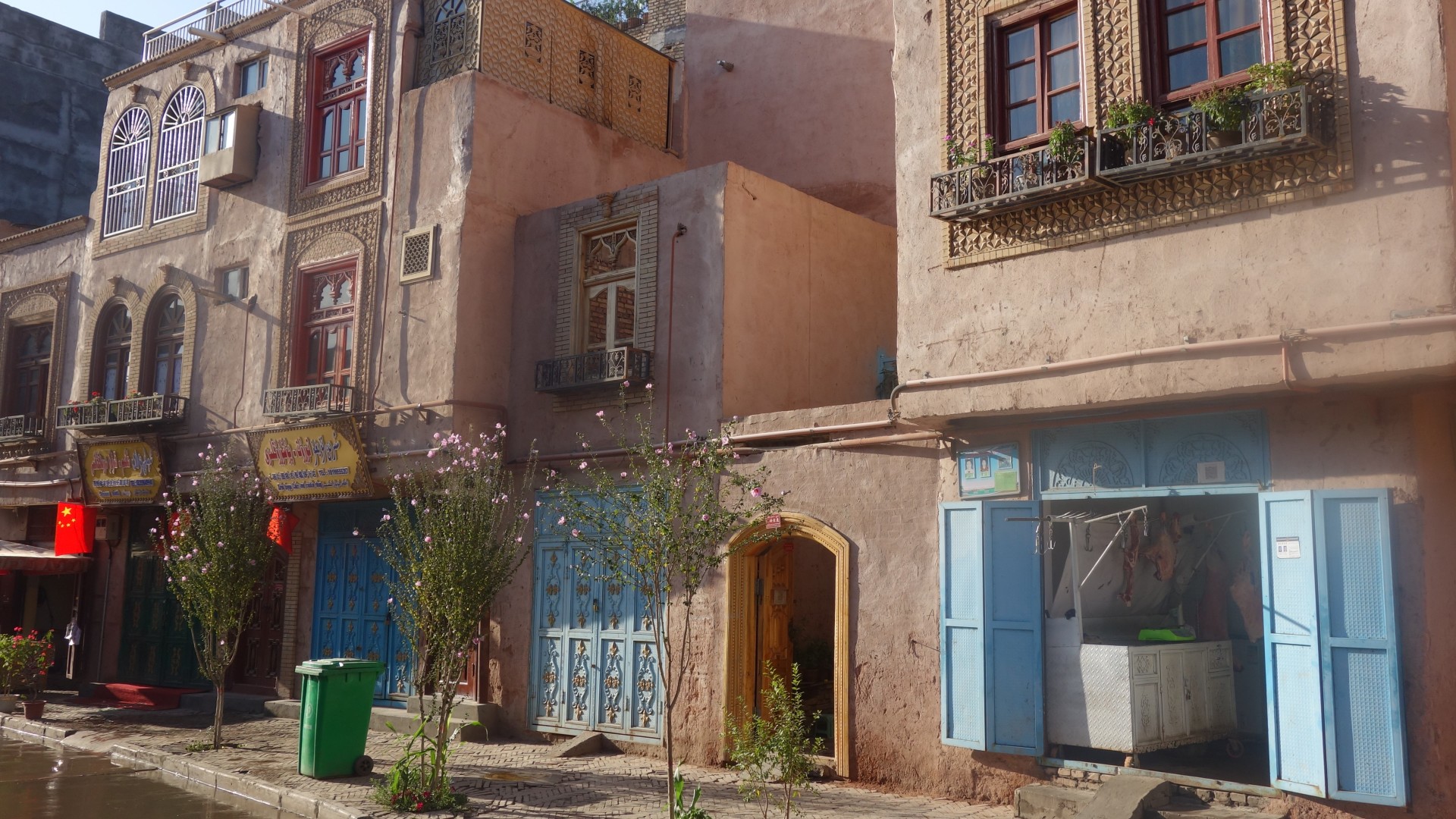 The traffic free streets, such as Hat street and Smith street, are named after the professions practiced in them and there are workshops dotted between the awninged shops and homes where wood is being turned, metal bashed and animals chopped into chunks. 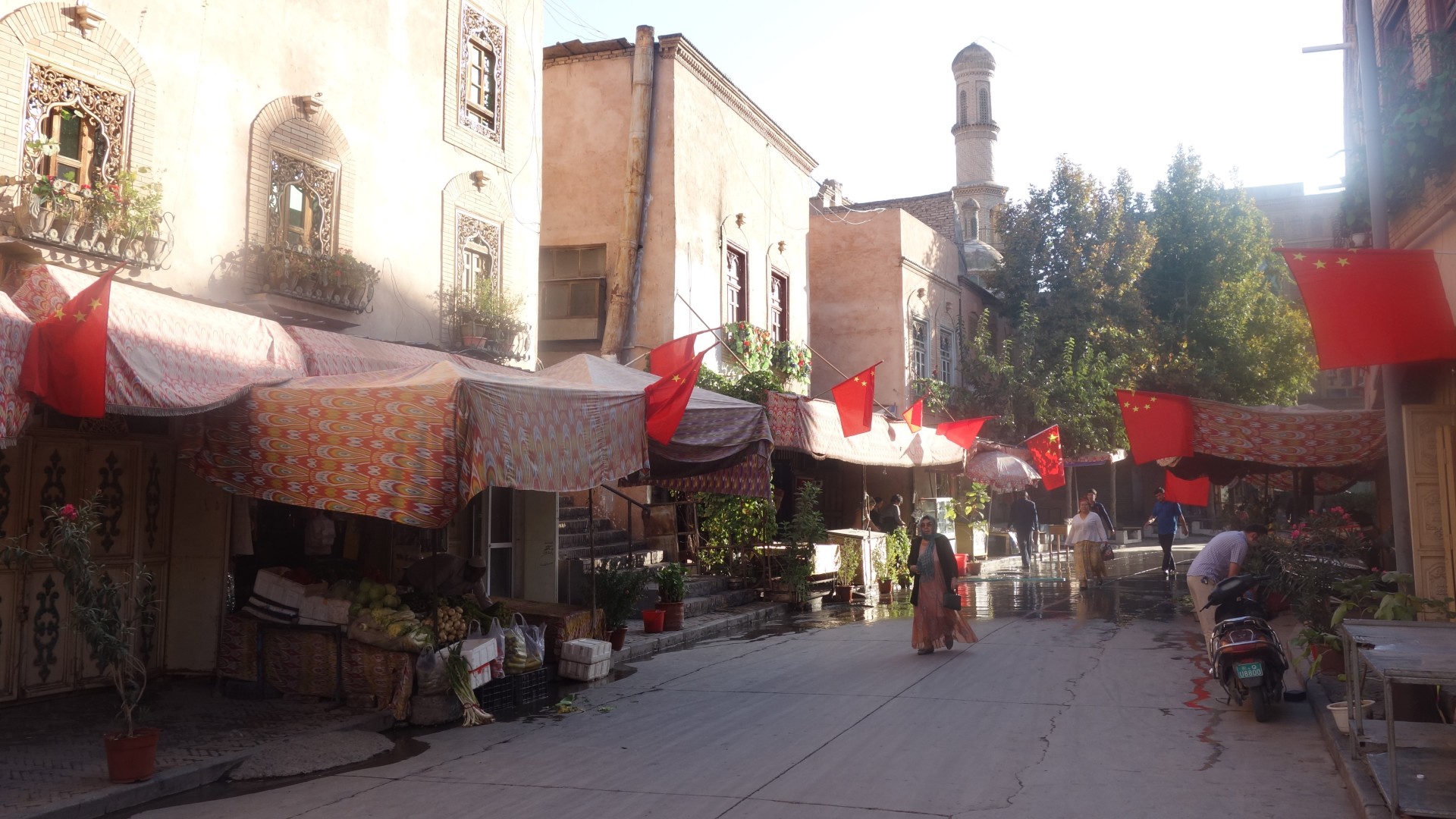 We spend a whole day wandering around the peaceful clean streets. 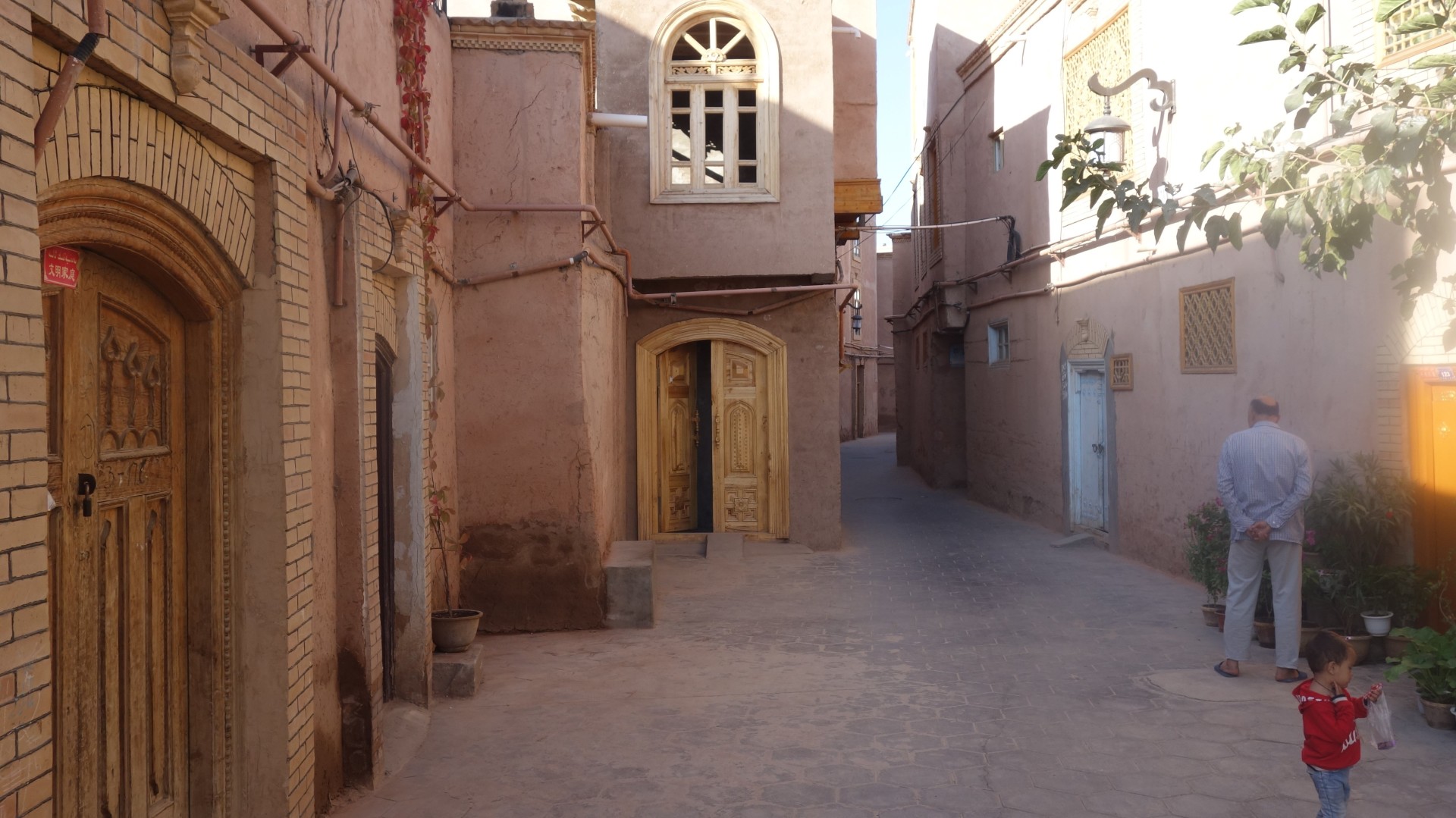 The residents look at ease in their local clothes, chatting in groups and keeping one eye on their children playing nearby. If it wasn’t for the abundance of Chinese flags flying outside every building, this could be the middle east. 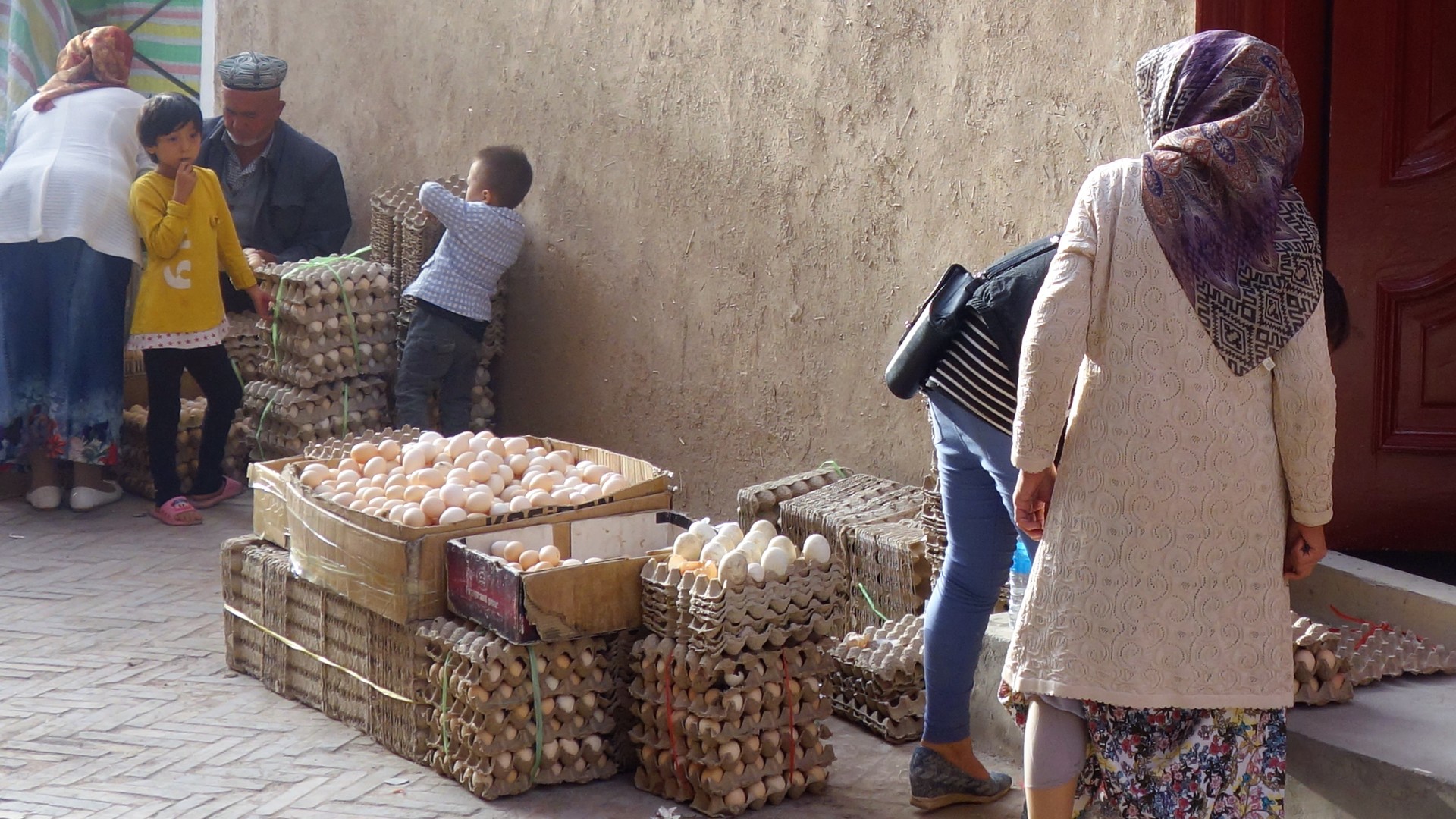 On the second day we take a bus journey to the Karakorum highway towards Pakistan. The road winds up towards the Khunjerab pass, the highest international border crossing in the world and there are fantastic views of lakes surrounded by snow-capped mountains and grassy riverbanks with yaks, cattle and the occasional Yurt. 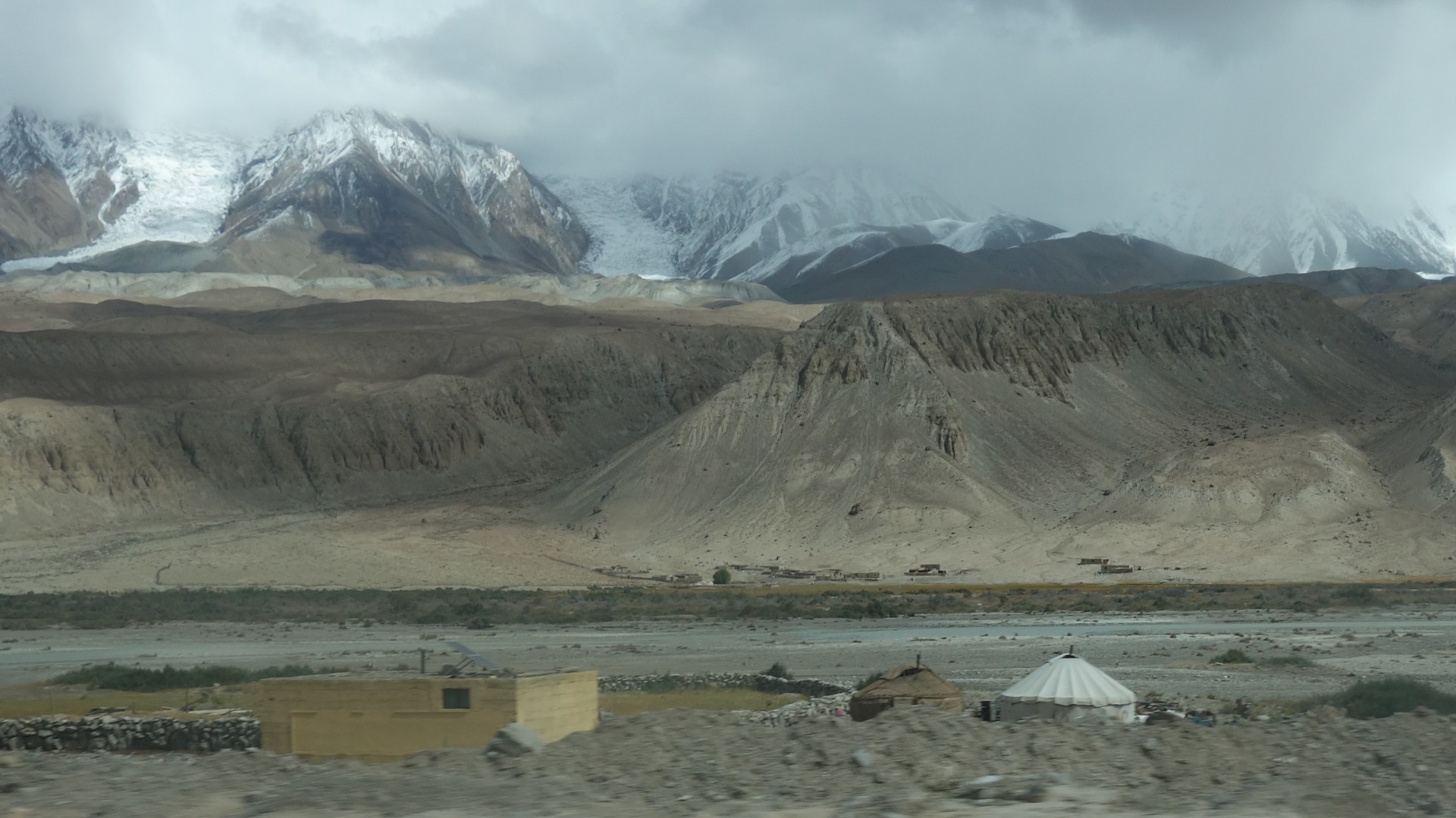 Kashgar is as far west as you can go in China. Although Beijing time is maintained, nowhere opens before 9 in the morning and shops, restaurants and night market stay open later in the evening. 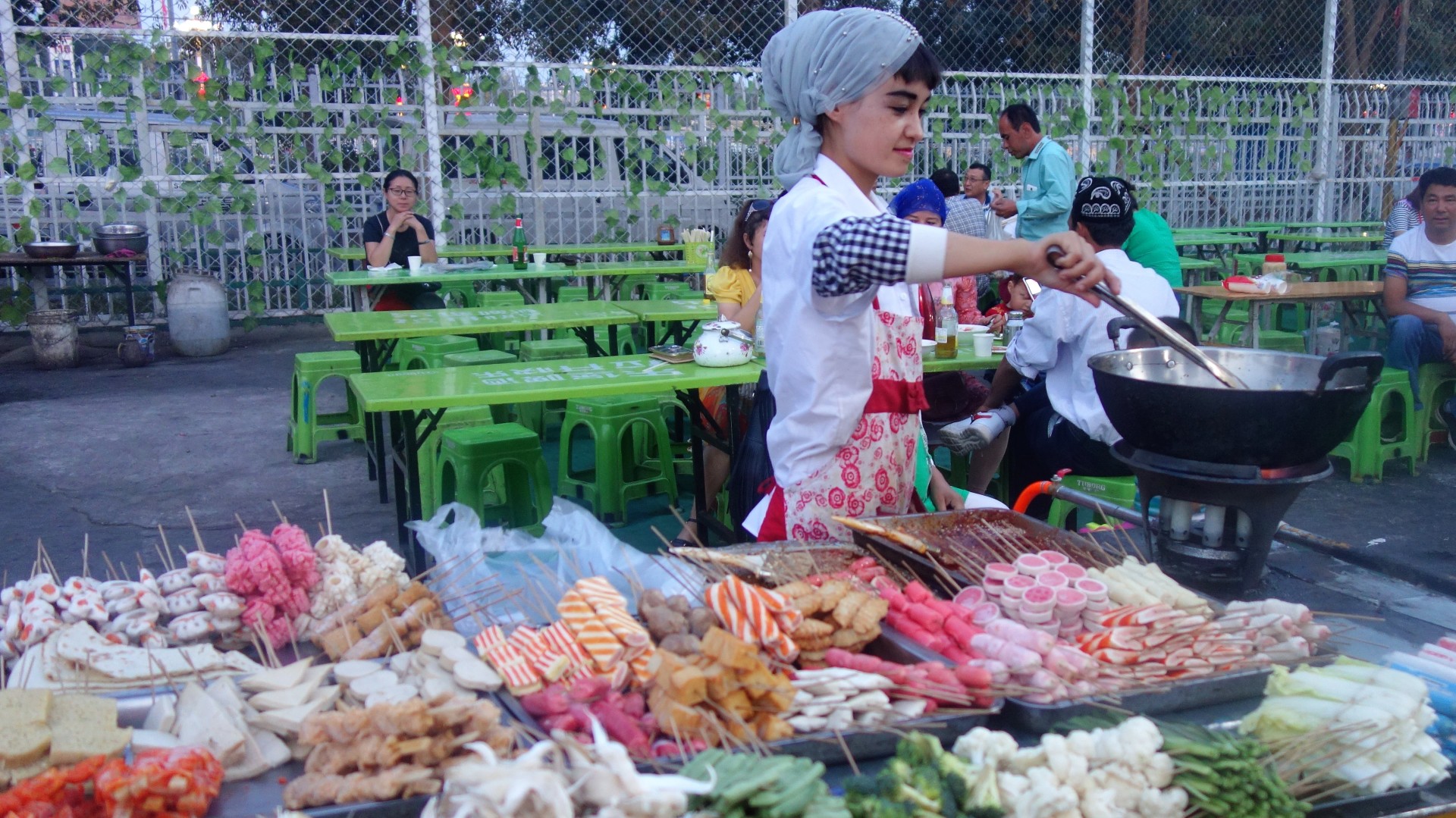 After dark, a convoy of police vans patrol, continuously, up and down the main street, their lights flashing and sirens wailing. As the Chinese flags fade into the darkness, they provide a reminder of the continuing presence of authority. A few miles further west the silk road continues to the Torugart pass into Kyrgyzstan but the border security is tough, special permission is required in advance to cross and the opening times limited because of the difference in time zones. We take a 2-hour flight north to Urumqi. 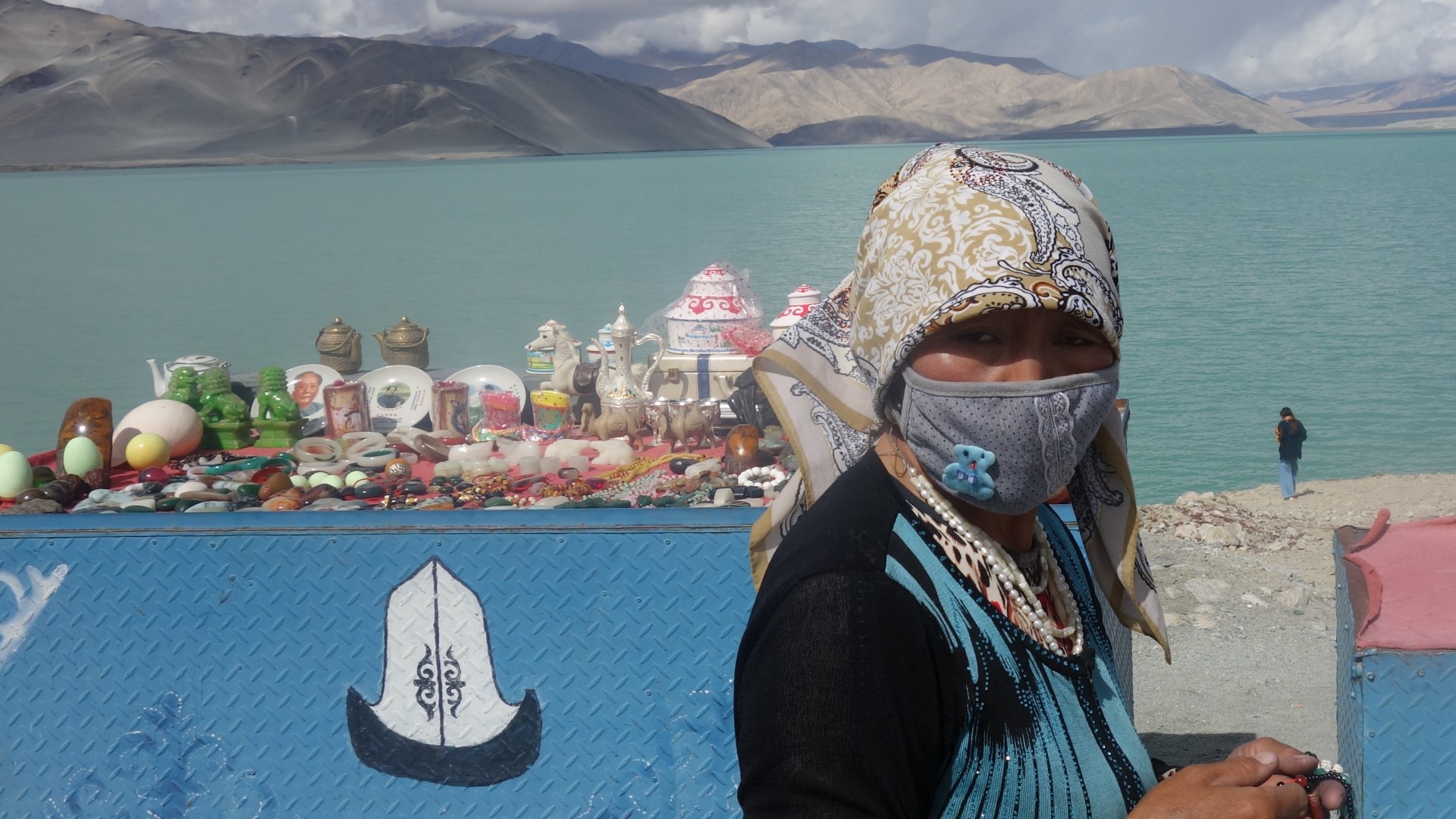 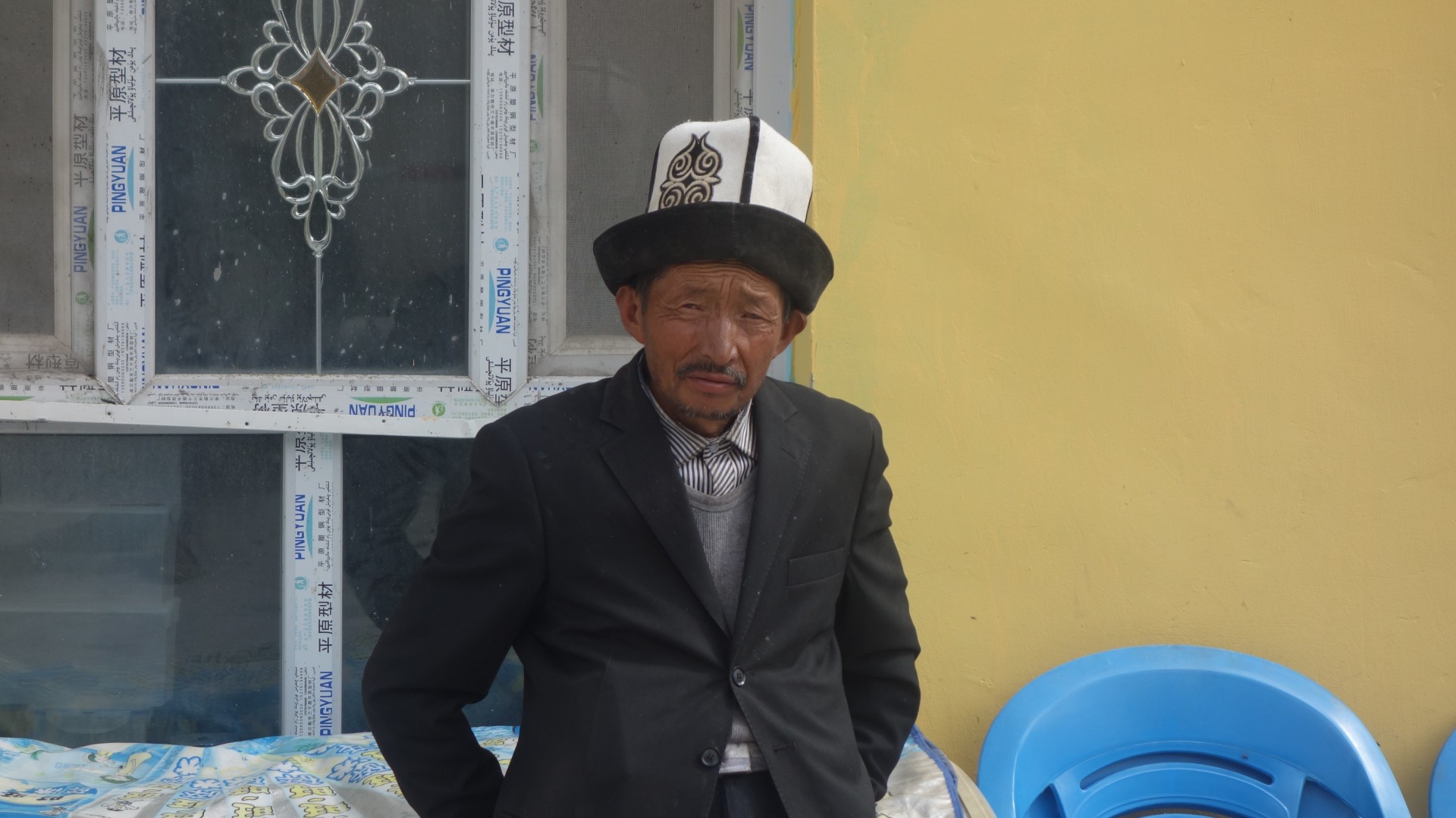 The capital city of the region is familiar the minute you step off the plane. It’s a typical city, the same as thousands dotted around the huge country. Grey apartment blocks, glossy shopping malls, large paved squares with statues, posters and flags of the nation. The people here are predominantly Han.

Urumqi is a convenient jumping off point for trips to the heavenly lake, a beautiful stretch of water nestled in the Tian Shan mountains.

We went as part of a group, a bus load of Chinese couples, a whole experience itself. Part of the busy itinerary was a visit to another minority, the Hasake. They treated us to snacks and milky tea while singing and dancing in their local dress inside a yurt. After a sing along, we were encouraged to dress up in their costumes and take pictures of each other holding a stuffed eagle. 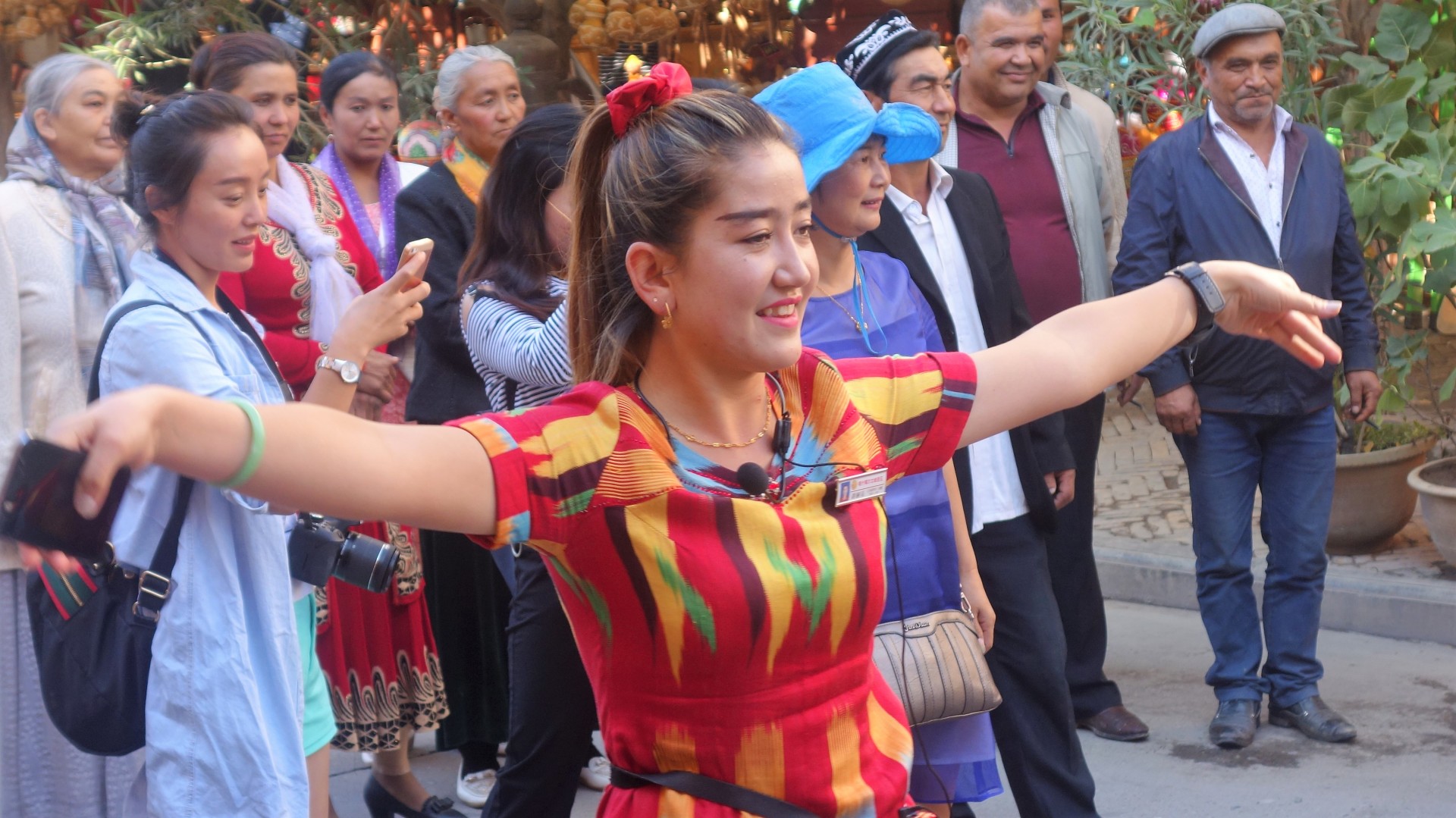 Outside, their village of yurts is enclosed in an old iron fence where small children wander like bored animals watched by old men. The satellite dishes and electric cables, the outdoor plastic tables and chairs had the same depressing air of poverty that I saw at a travelling circus I looked around once. These people weren’t travelling anywhere, this was home, at least for the tourist season. We were shepherded off to another spot good for taking photographs of the lake. The group dutifully followed the guides instructions on suitable poses in front of the water bright blue nestling between the humps of paler hued mountains, their banks patched with golden leaved trees and dark pines. The magnificence of the landscape contrasting with an old Hasake couple, out of their enclosure, begging money for food. 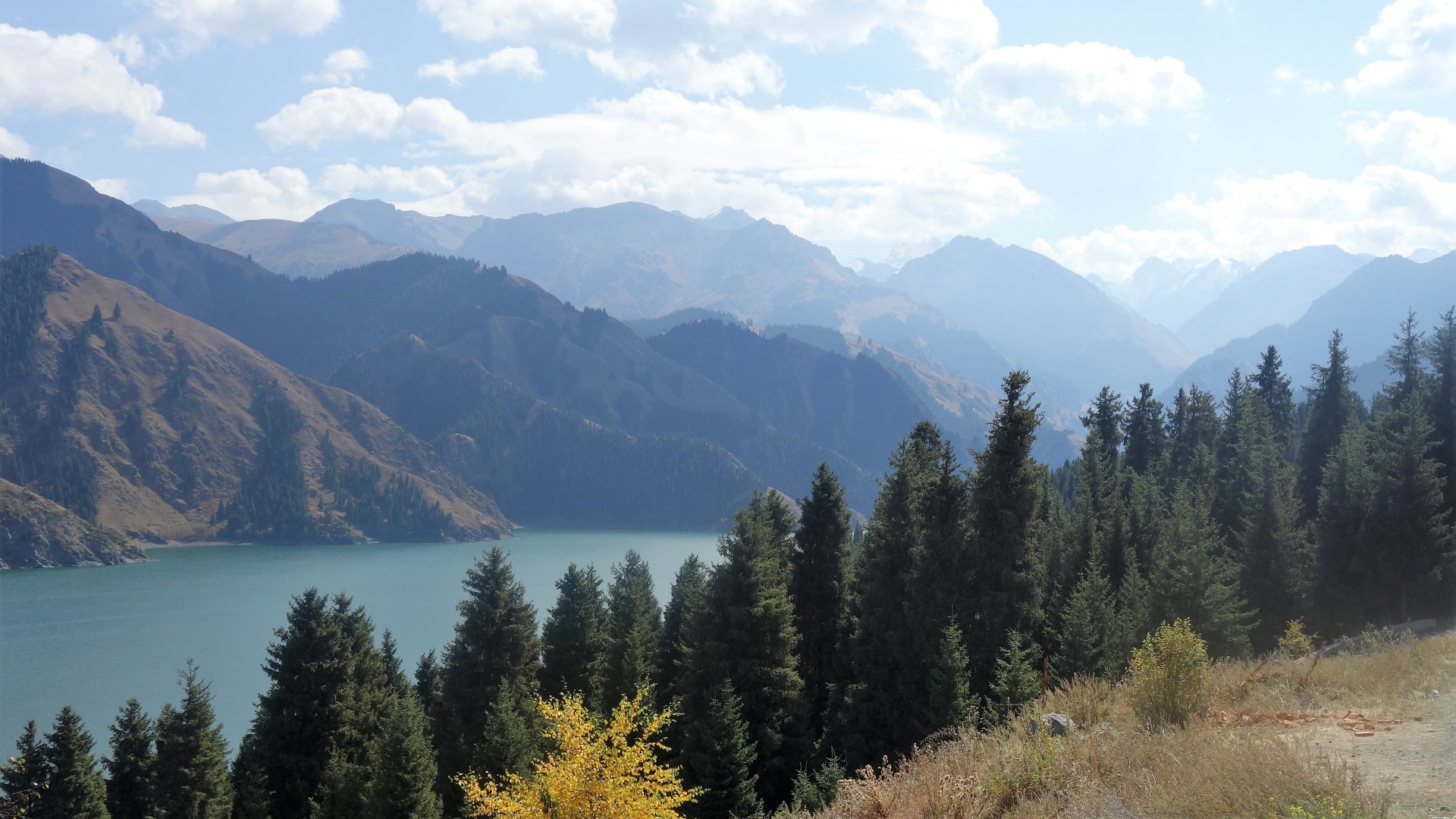 The lake area is naturally beautiful, only marred by its commercialism and artificial embellishments. Away from the paths, free from itineraries, the group think of tour parties and squalid side shows the area is wonderful.

Xinjiang is similarly full of a natural beauty, its unique culture and identity struggles to fit into the majority’s definition of one country. An interpretation that leaves the only safe expression of diversity in performing for cameras and the selling of trinkets. 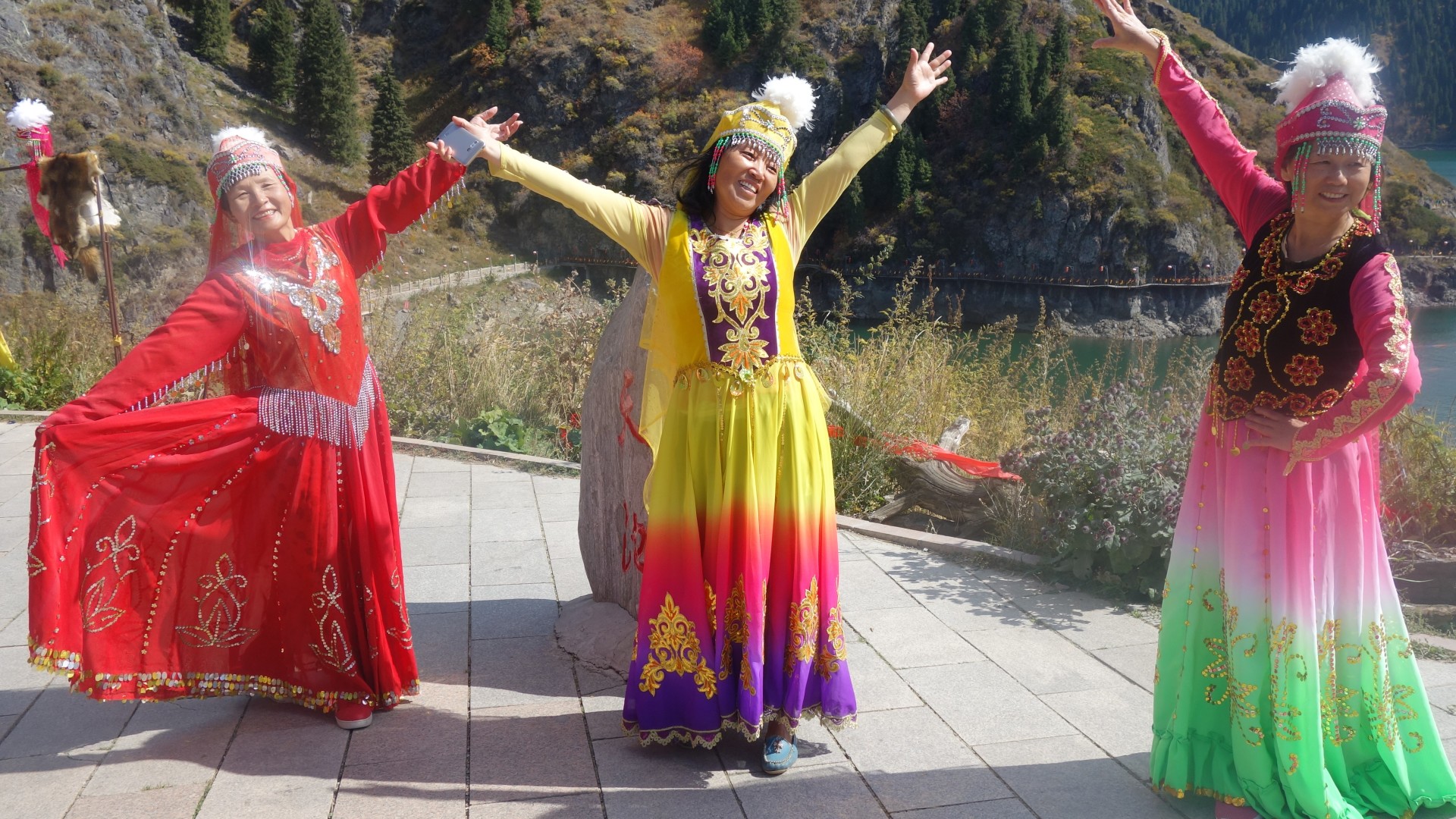 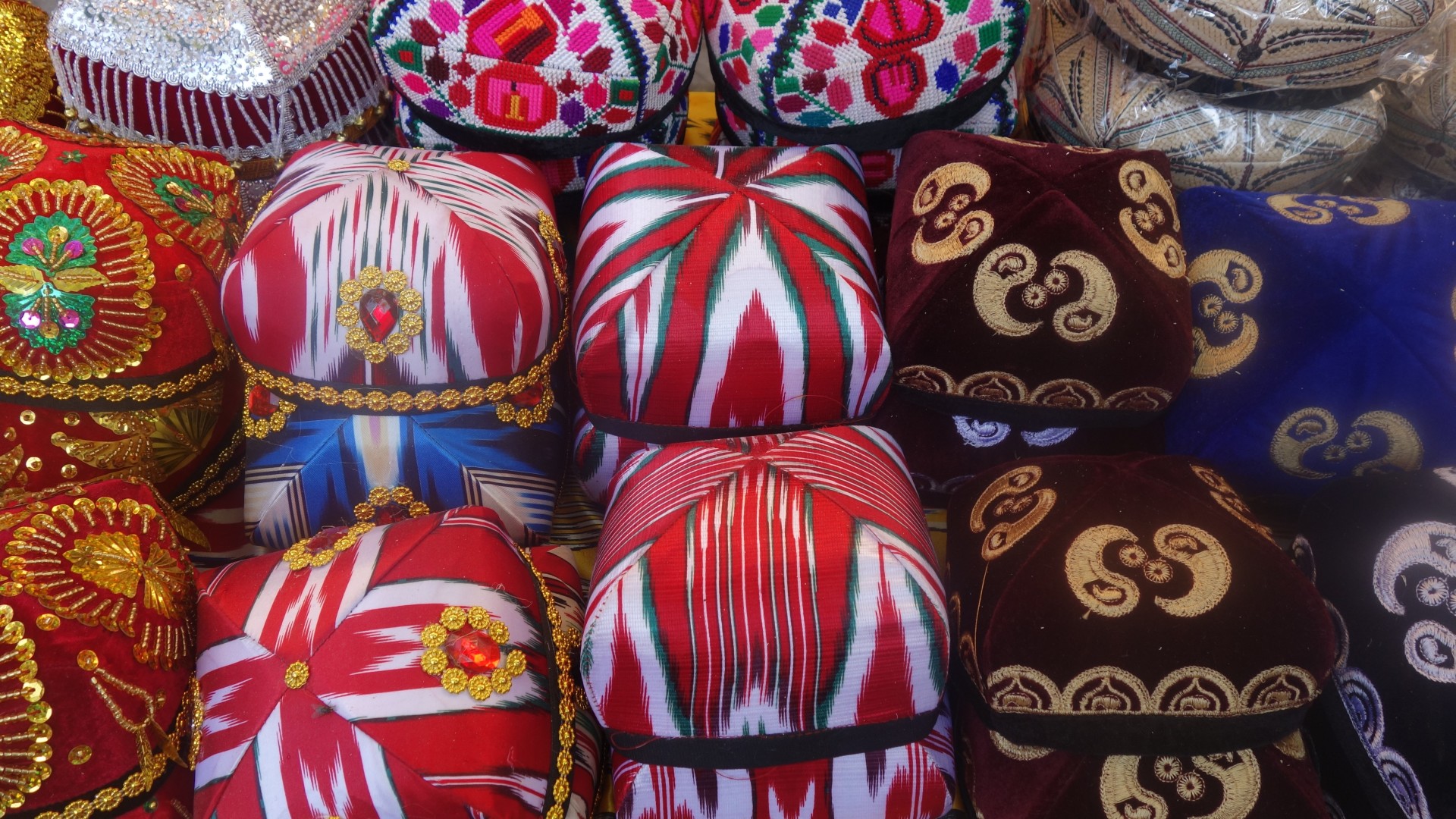