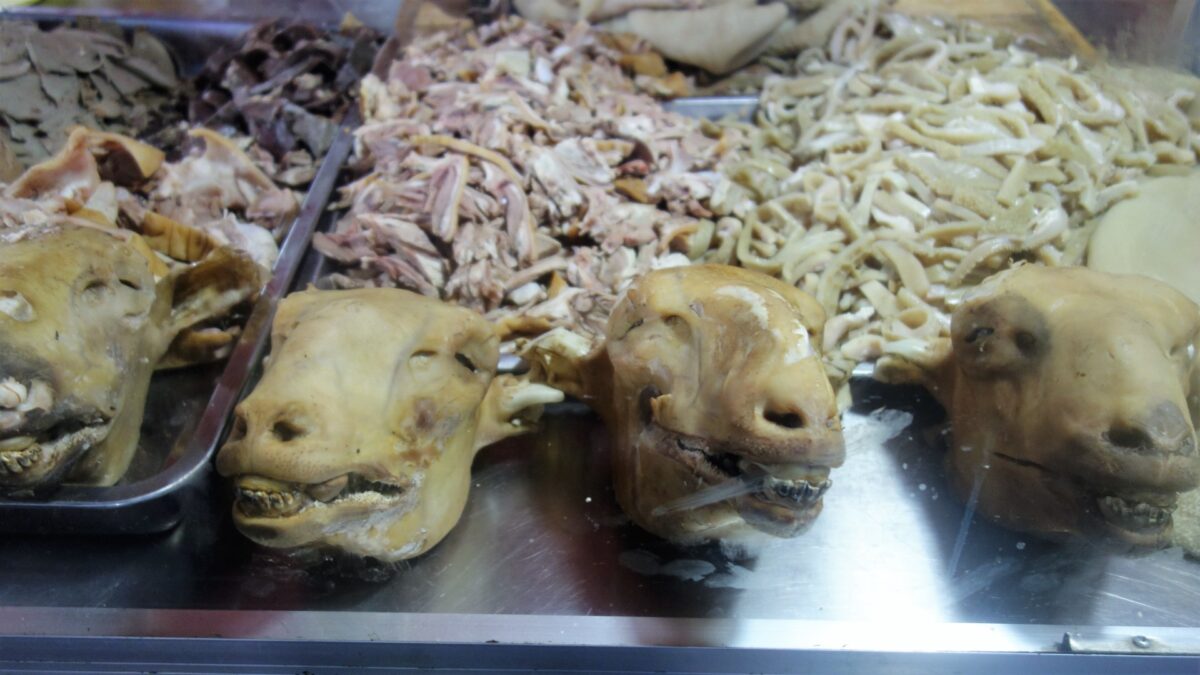 Lanzhou, at the start of the Hexi corridor, on first impression, is a typical ugly Chinese city. The usual wide streets criss crossing in a grid of shabby lines of low level buildings. The fronts and sidewalks are cracked and holed, rust stained, broken. The airport hotel is equally decrepit, the room lights are dim, a large patch of wood veneer missing from the bathroom door, the modem and wifii hanging by their wires on the top of the TV. It smells of glazier’s putty, but It’s clean and the bed comfortable, which are the main things.

After a standard buffet breakfast of noodles, cabbage, boiled eggs and congee we take the bus into the city. The road cuts through conical peaks of sandy brown soil. The sides are thinly coated with clumps of dark green. Occasionally, there are breaks where you can see along a valley of abandoned farms into a distance of high sandy mounts. As we approach the city it becomes a sequence of quarries then building sites.

The city is suffering from massive investment. Building work is everywhere, from new malls and apartments to a subway and highways. Our Airbnb apartment for the night is in a new block accessed through a mall still being built. All part of the transforming of a tired jumble of last century builds into a smart and modern Chinese city. One of the noticeable differences here is the visible number of Muslims. At the airport there had been an unusual sight of a young man publicly using a prayer mat. Here in the centre, there are crowds of men wearing Takiyah hats and women, even young girls, in head scarfs. 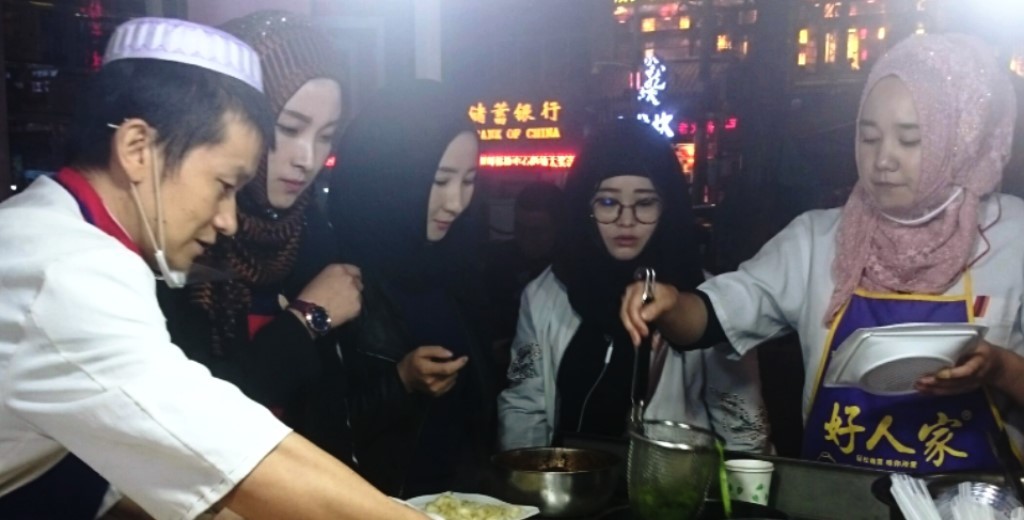 We are not here for long, enough time to check out the rather average banks along the Yellow River and the rightly famous night market . Its long Street of stalls selling delicious cooked foods and yogurt drinks. The stalls are predominantly Muslim run, women in colourful headscarves, the men wearing Taqiyahs and older men with long white beards serving lamb, large flat breads and milk drinks. 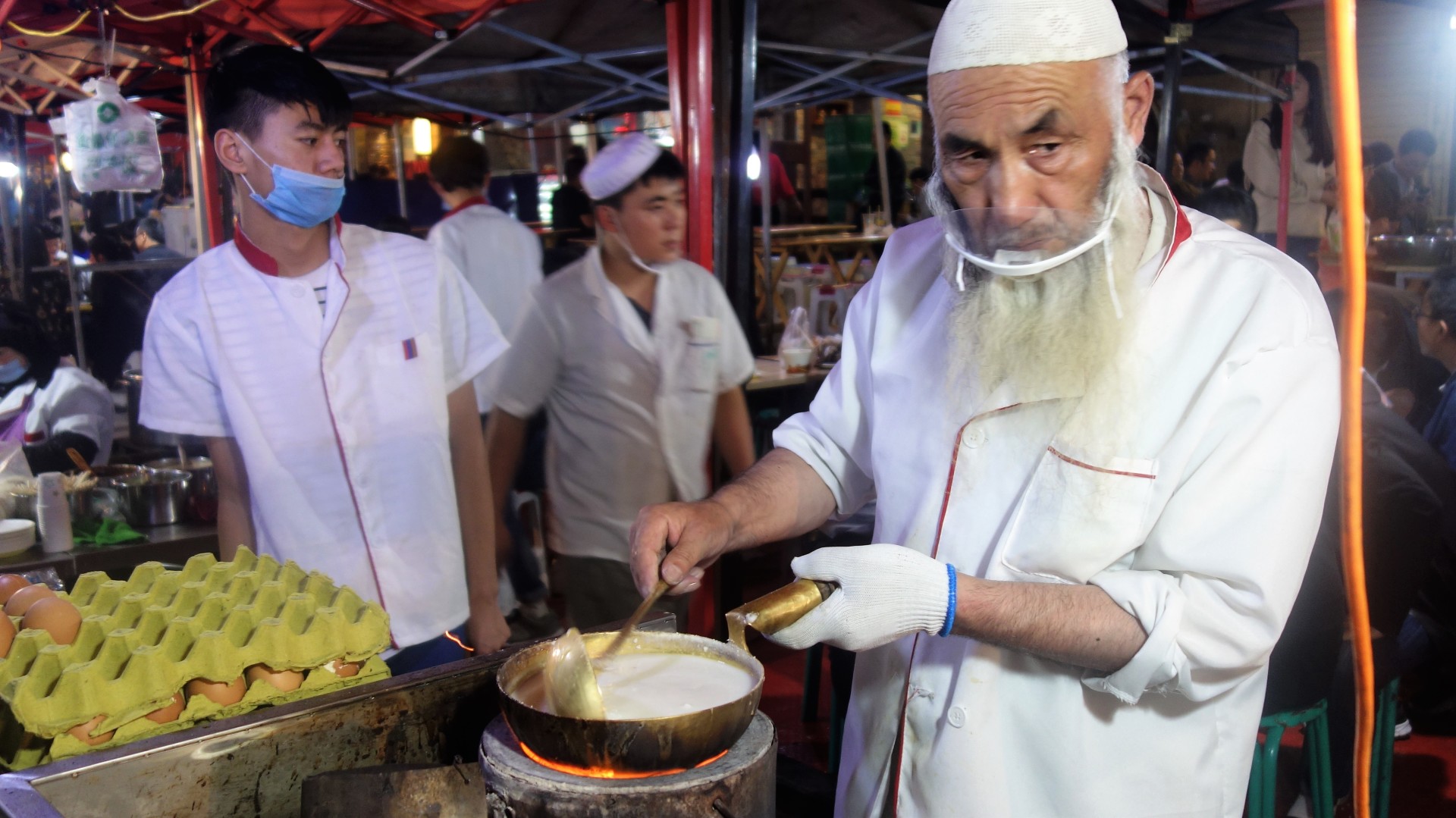 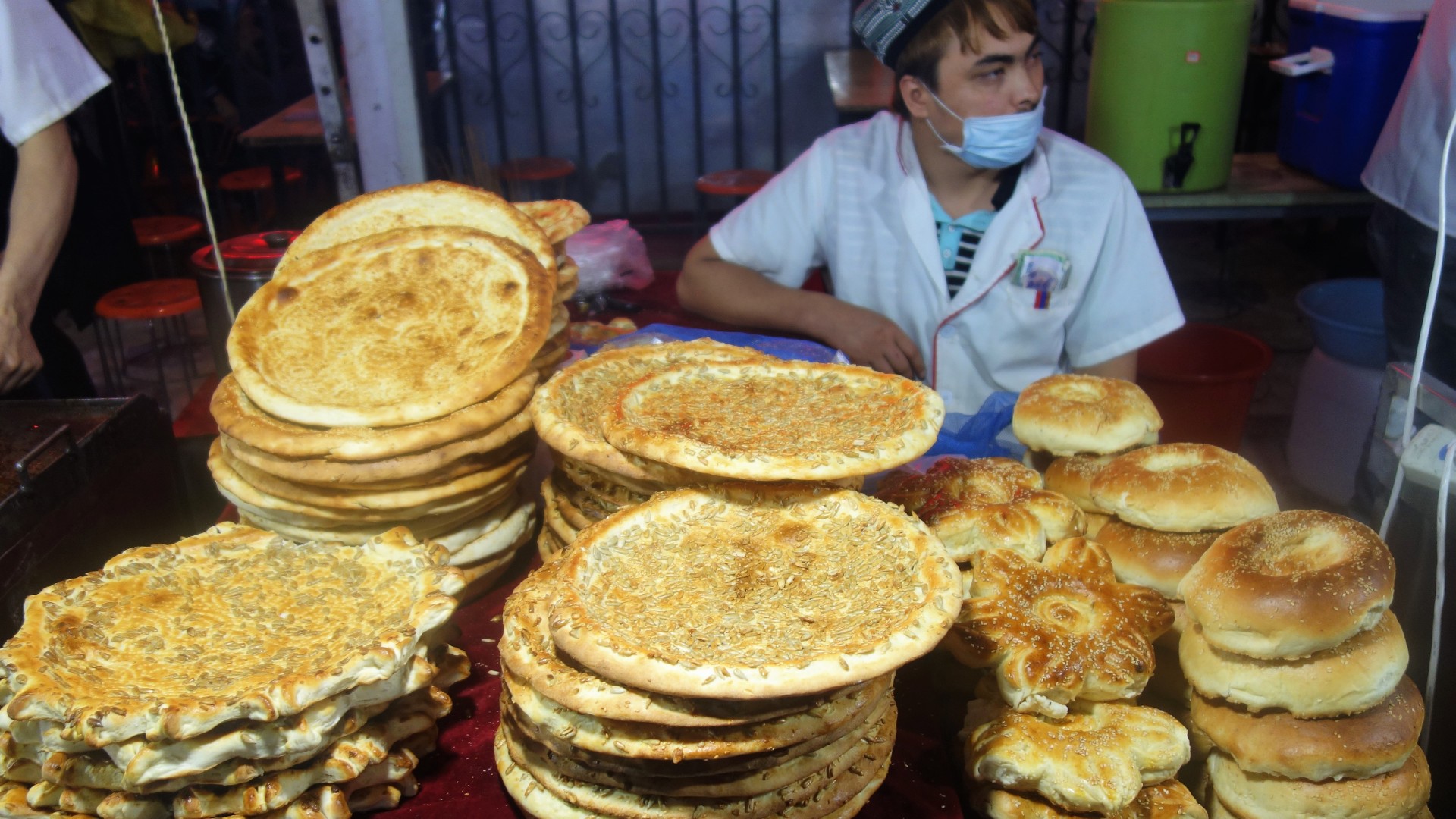 The following morning we visit the Yellow river before taking the high speed train out from Lanzhou into the first part of the Hexi corridor. A narrow strip of fertile land that runs between the Chinese interior and the massive western province of Xinjiang. It is practically a subway so much is underground. Not because the track has burrowed beneath the city, but because the land has risen up and we tunnel through the thick folds. Briefly, the train emerges and there are glimpses of steep valleys between the sandy peeks. Later, we enter the Hexi corridor, the strip of land is divided into fields of green crops, bright against the red mountains behind. A brilliant blue sky overhead gives a world of colour, made more vivid after the long darkness of the tunnels. 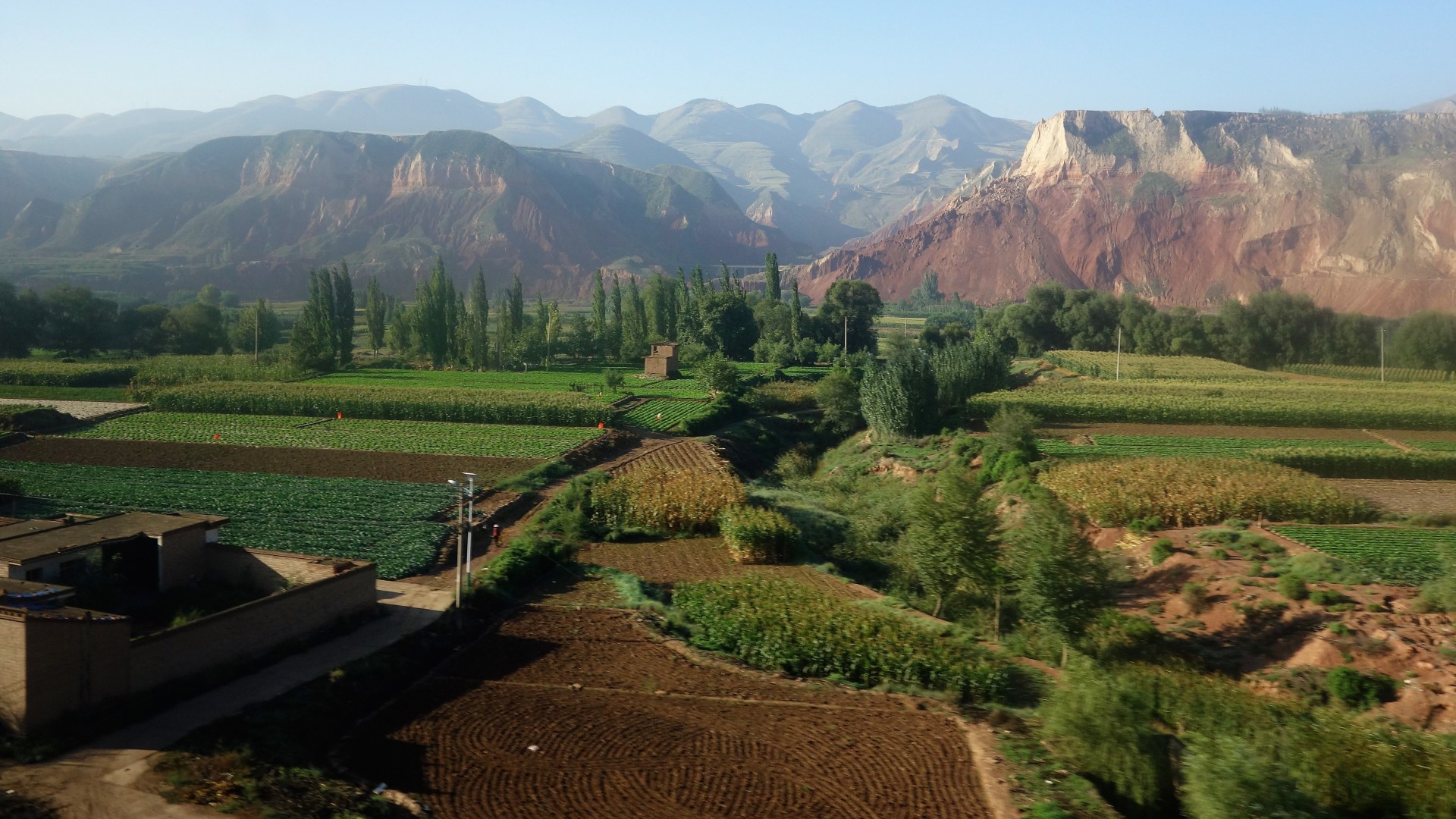 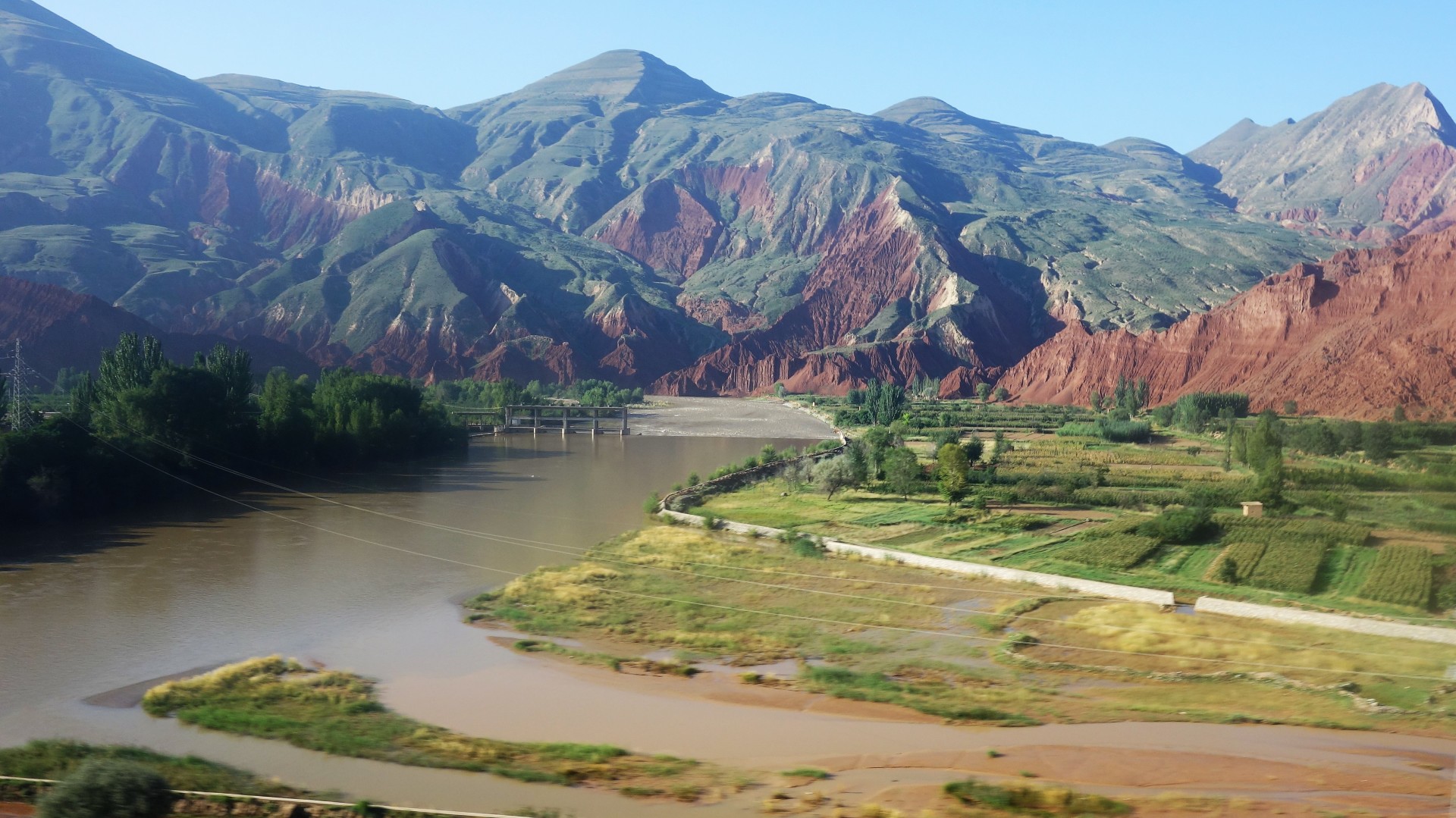 Further along, the mountains rise and their bases darken to a sooty rock and tops are white capped with snow, there are fields of golden wheat or lush grass flecked with sheep. The train must have climbed too, as the snow line has lowered almost to track level. I worry about the single jumper I left at home on the settee, but when we arrive in Zhangye it’s warm and the sun quite fierce. 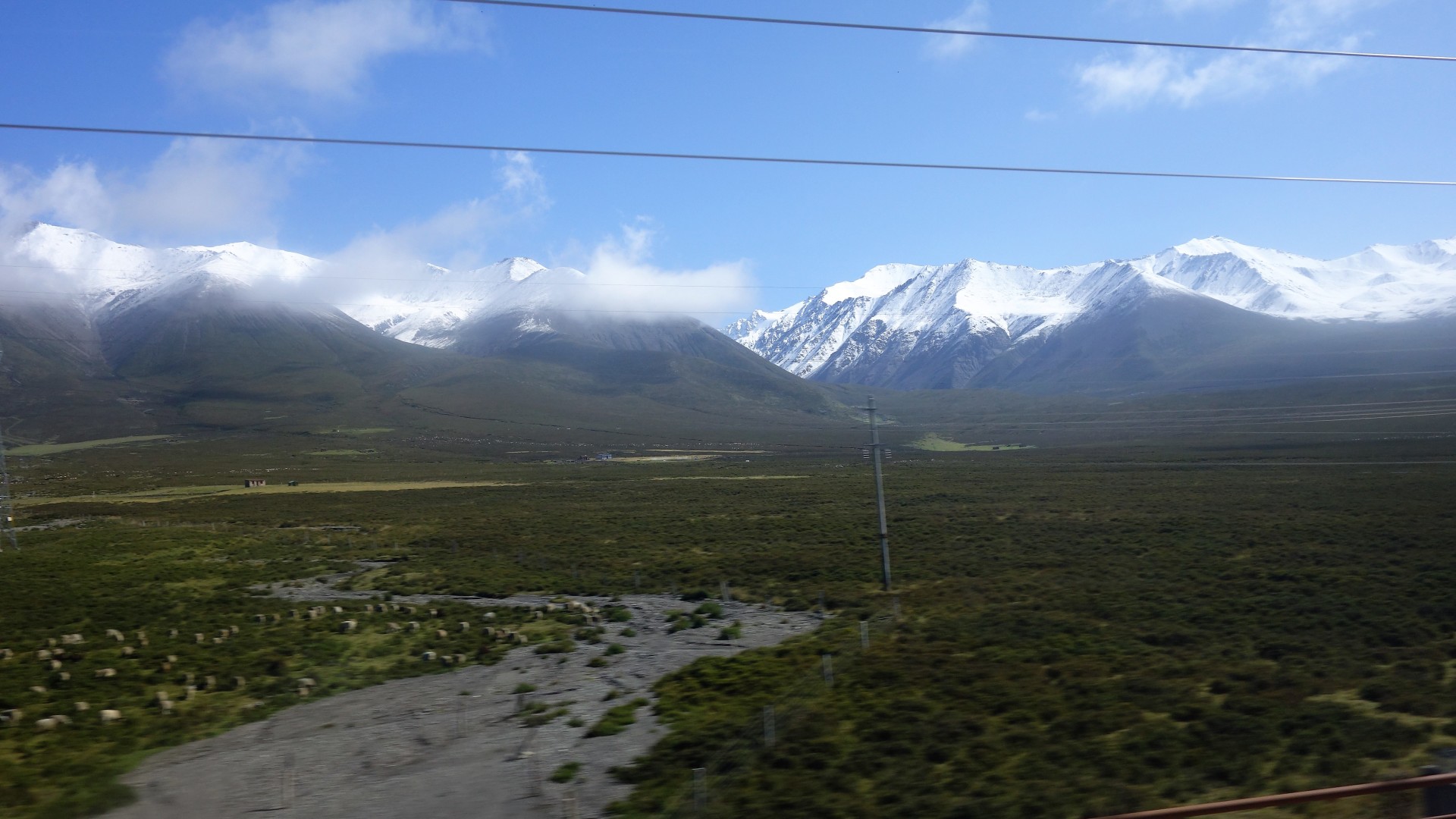 We get a taxi to the hotel and on the way we ask about the geographical parks, he recommends we go immediately. We hire him for the day at 350rmb.The geo park is tremendous, few people and the rock formations are stunning. 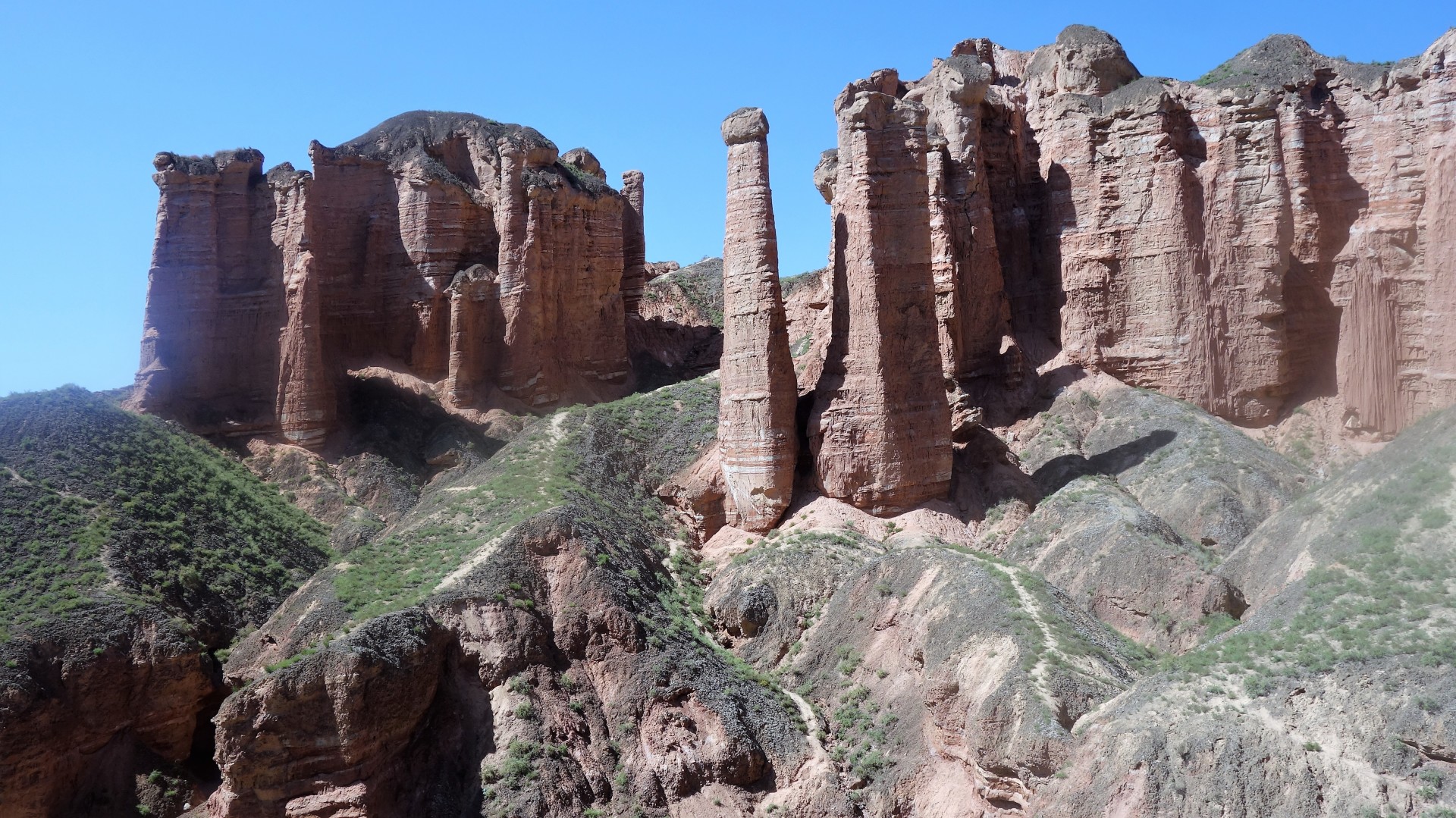 Several routes have been laid out to the best views. Their steps are made from a different material to the surroundings with their edges painted in black and yellow stripes which scar the land. Handrails are made from metal scaffolding coated with concrete to look like wood. Perhaps the worse vandalism of this beautiful landscape is the piped music and cctv cameras that dot the paths. But it’s difficult to spoil such dramatic landscape, even the phone mast that dominates the valley, hardly detracts from the snowy peaks that float over the horizon. 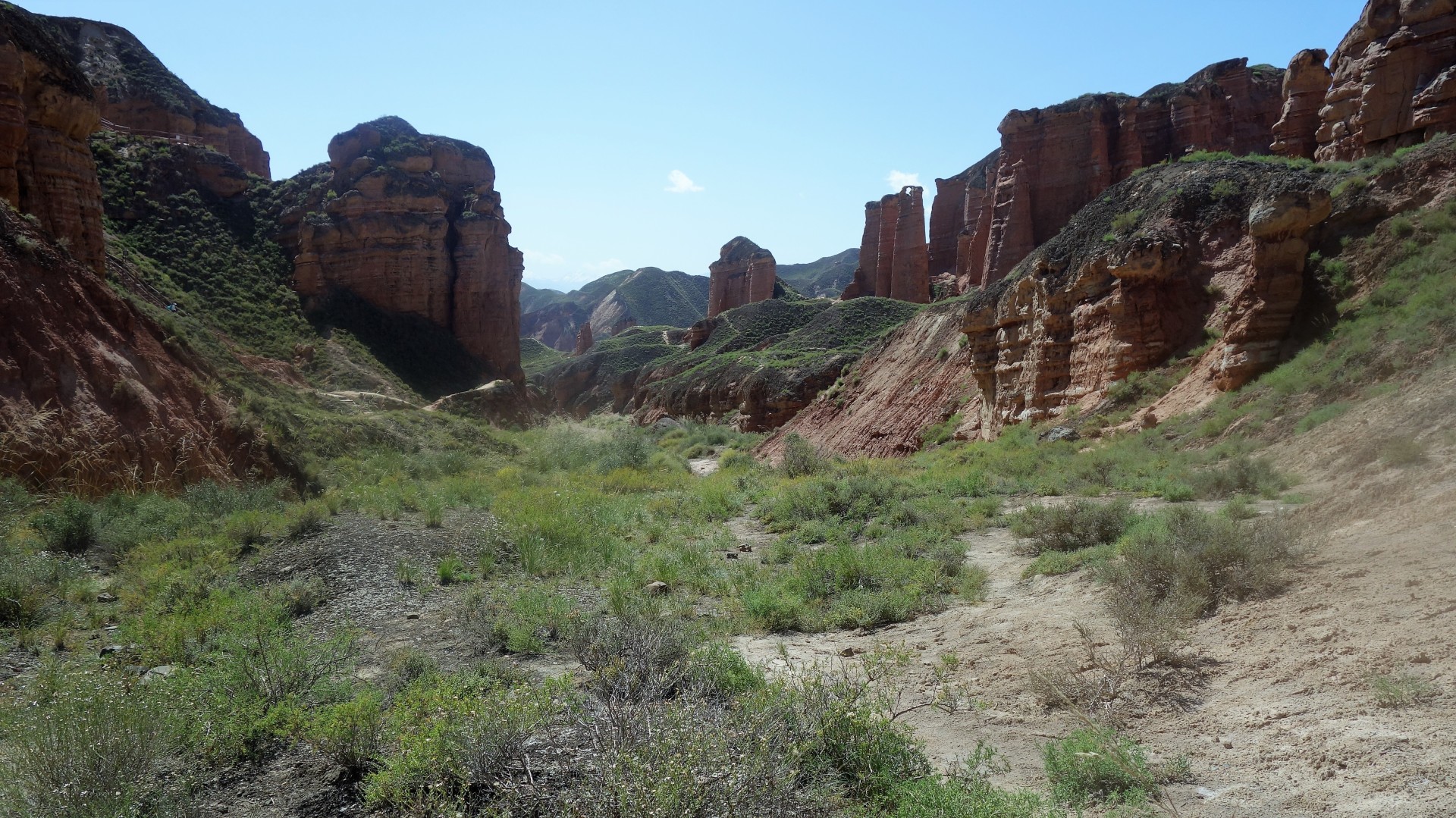 Half a mile further in there is a weathered sign that says ‘path stop’. I think it’s telling me I can’t go further, but I continue and the walls slope in to a narrow canyon that twists around the eroded towers of rock. I realise the sign means that the solid track and steps, the cctv and mood music have stopped. At last free to enjoy the natural beauty with all the silence and risks judged unacceptable to the Chinese authorities. 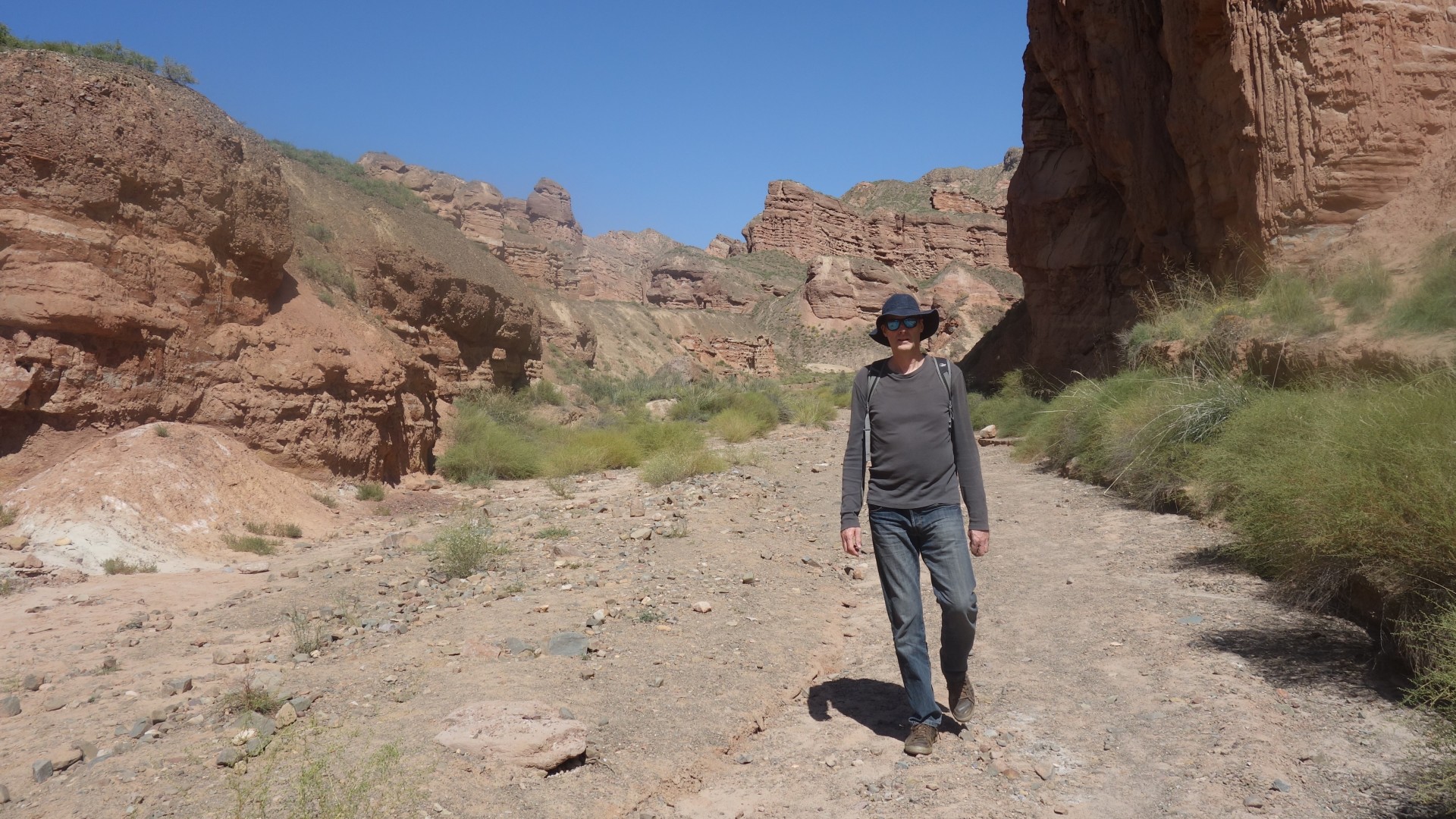 The second park is famous for its strangely rainbow coloured rocks. 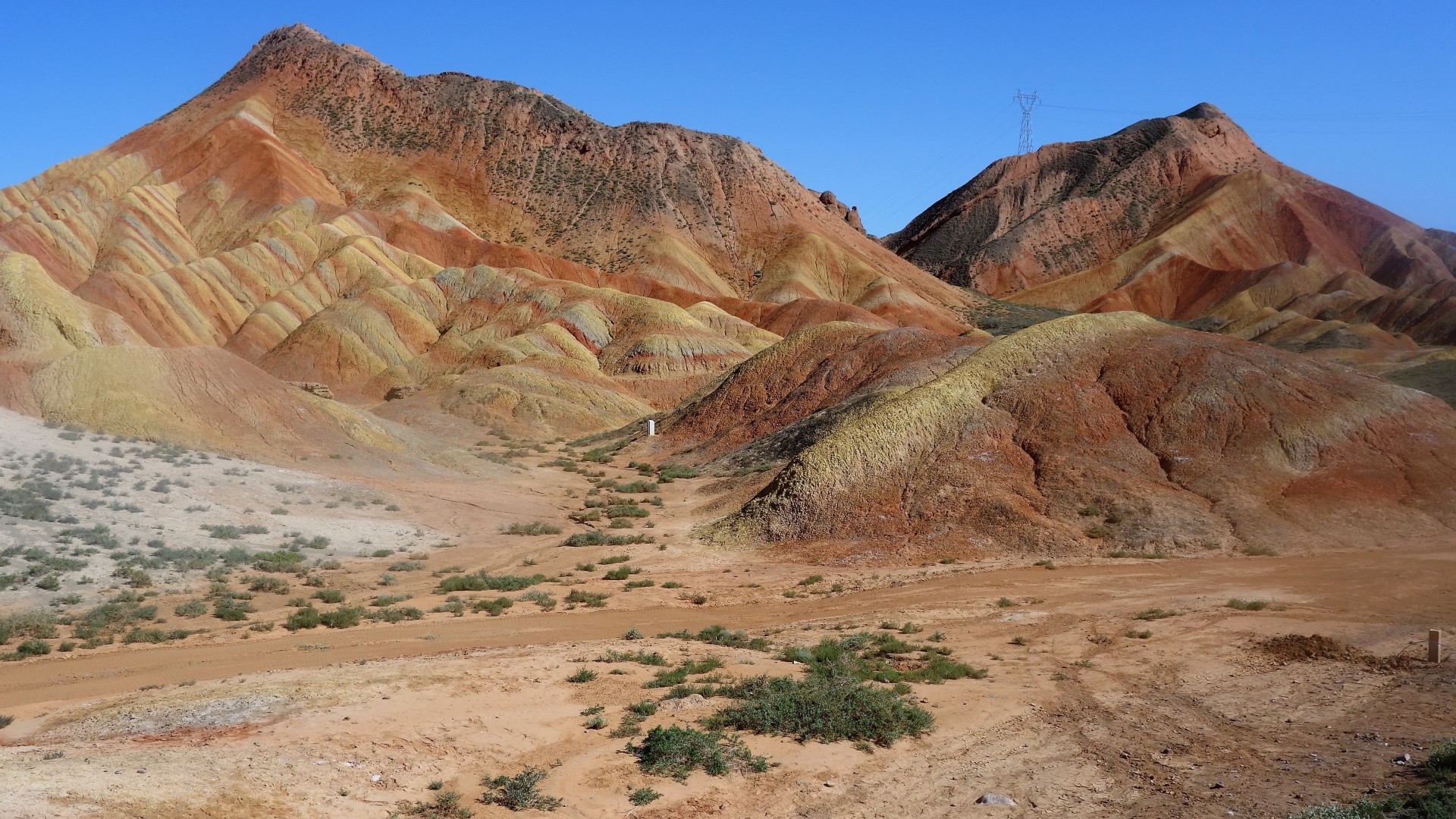 This park is busier, full of noisy coaches and even noisier Chinese tourists pushing to take selfies and group snaps in front of a landscape of unworldly swirling hues . Once again, piped music is added to the raucous babble of voices and grumbling diesel engines. The bands of colours are remarkable to see, but the full beauty of the arid emptiness demands a calm silence to truly appreciate the whole stark, empty vista. This time, the crowds and noise are unescapable and I leave with no feeling of the place beyond the remarkable images. 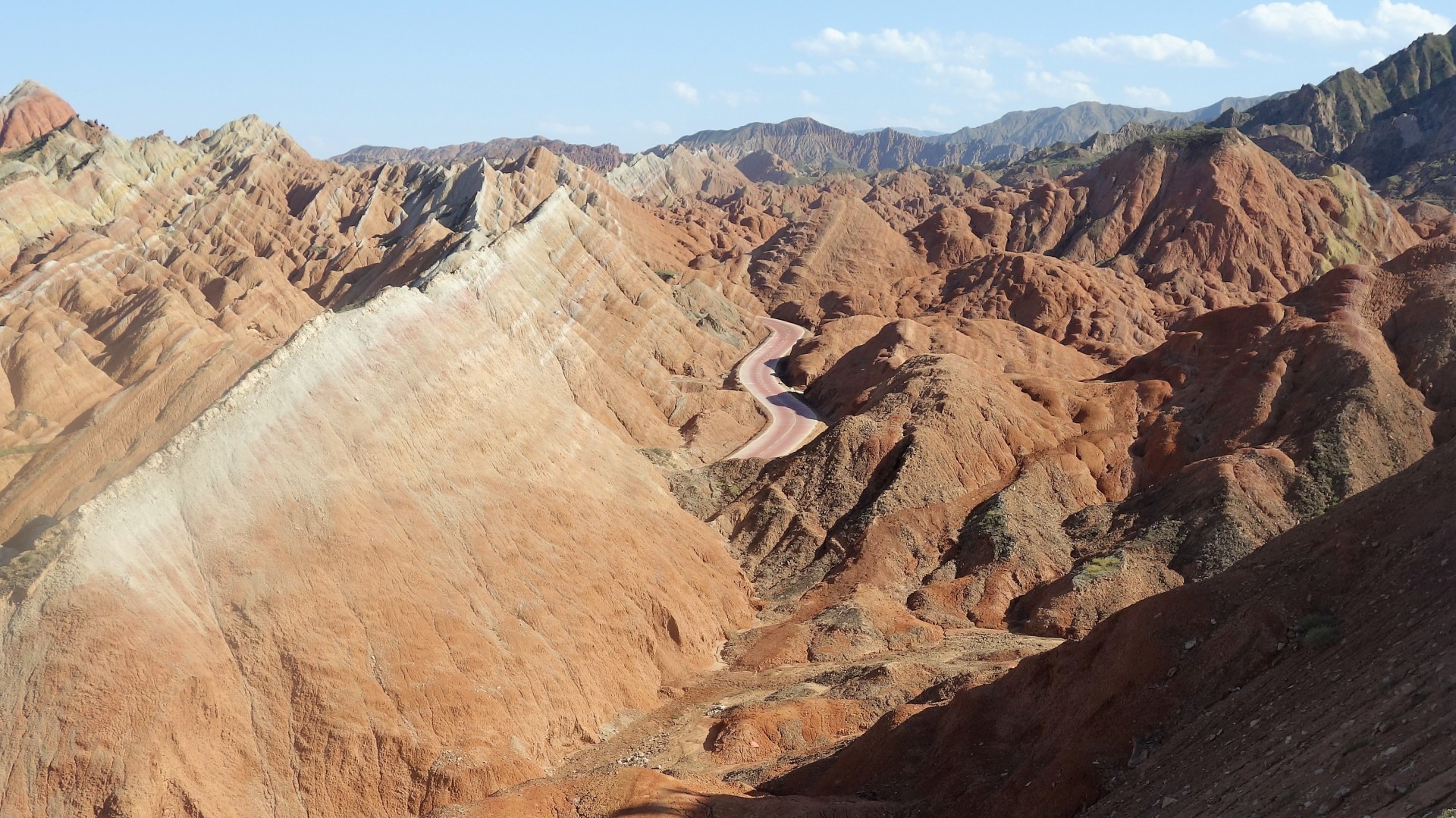 In the city there are few hotels that take foreigners, we had been told we could register at the police station but this turns out to be incorrect. The police take us to the youth hostel far out of town and only dorm beds left. We decide to airbnb it again. And find a private apartment just off the main street.

The following morning we continue on from Zhangye and the Hexi corridor becomes boarder.  The train follows the mountains to the south, whilst in the north, the plain stretches wide into the distance. The land becomes drier, semi desert; flat. Where there is water, fields spring up with poor villages of mud huts nestled among maize or wheat. But mostly it’s dry with nothing but the brown clumps of grass and telegraph poles. 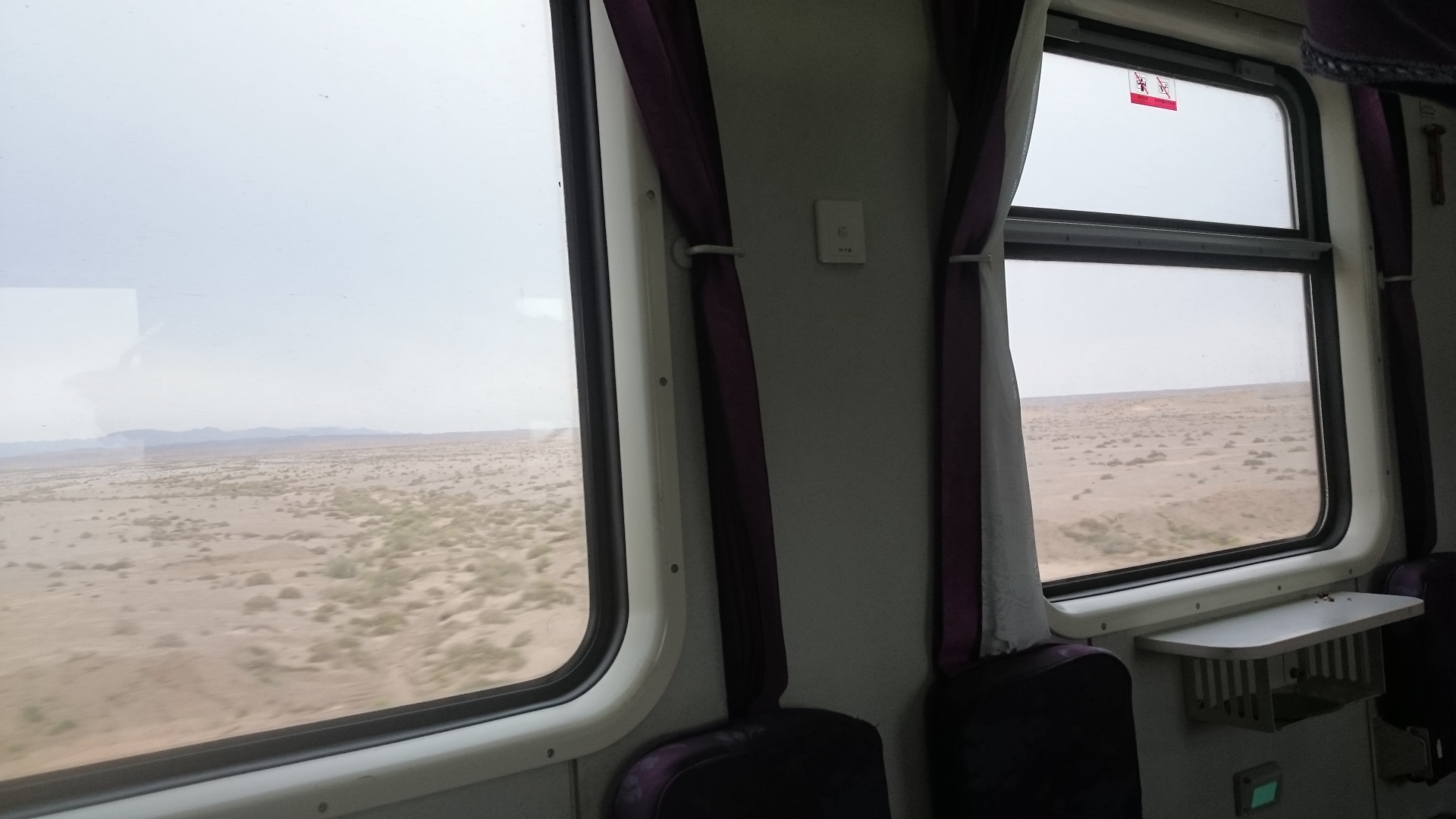 The train passes through Jiuquan whre the Chinese space program launches it’s rockets. The site chosen perhaps for the moon like surface surrounding the small city.

The attractions here are; the start of the great wall, the fort that once protected the pass and the signal beacon. You must get a ticket for all 3. The beacon is little more than a weathered mound of dried mud, it would have been enough to see it driving past on the road, but instead there is a shuttle bus from the gate and a museum – a means to justify the fee. The view over the river that cuts through the plateau is good, but the obsession with safety detracts from the enjoyment as does the unjustified time it all takes. 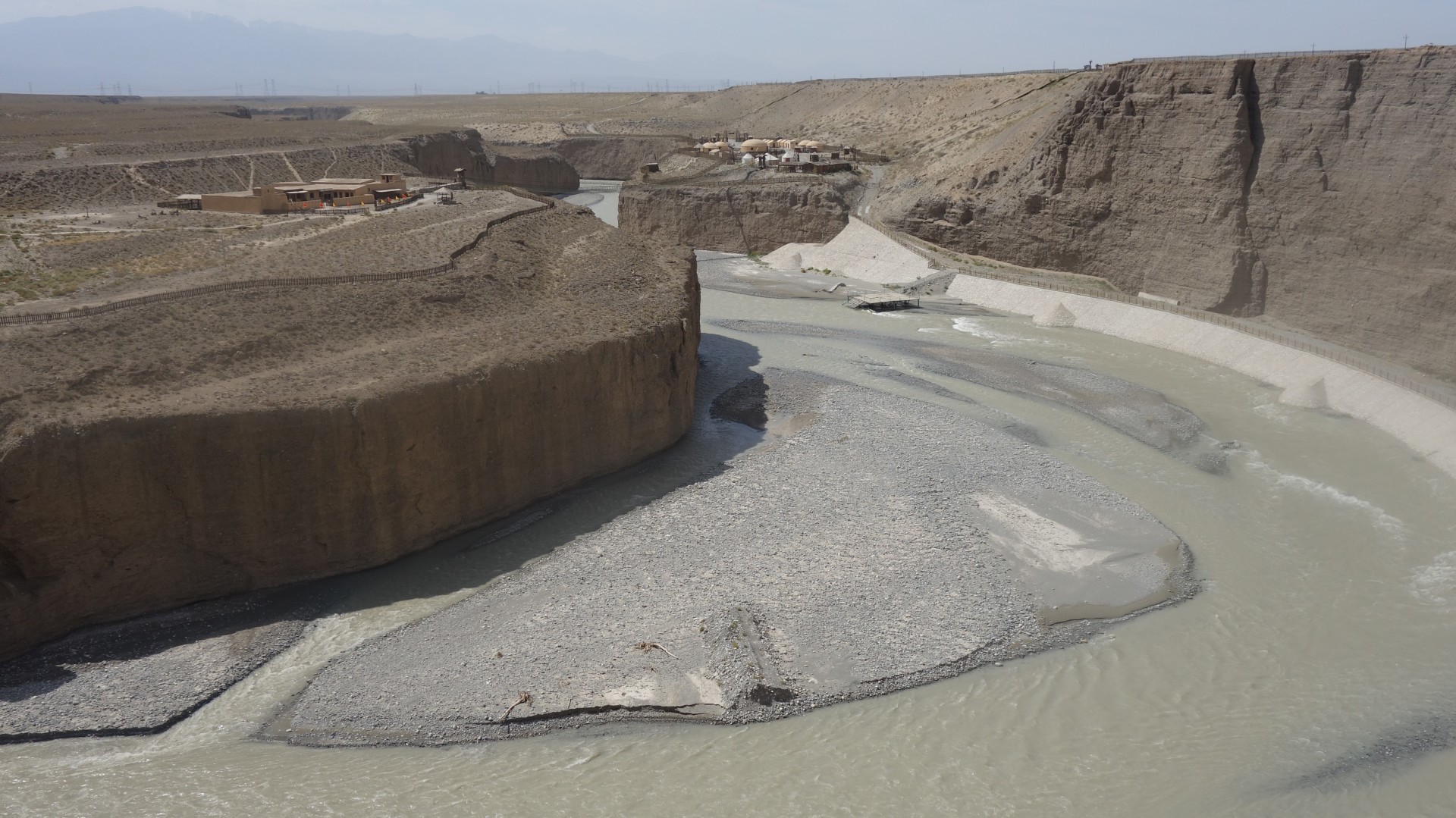 The fort is big, but empty except for souvenir sellers. You can climb up to the battlements and gaze out over a desolate landscape that was once the start of the uncivilized world beyond China. Today Chinas modern civilization spills out into the foreground of selfies, camel rides and dune buggies. 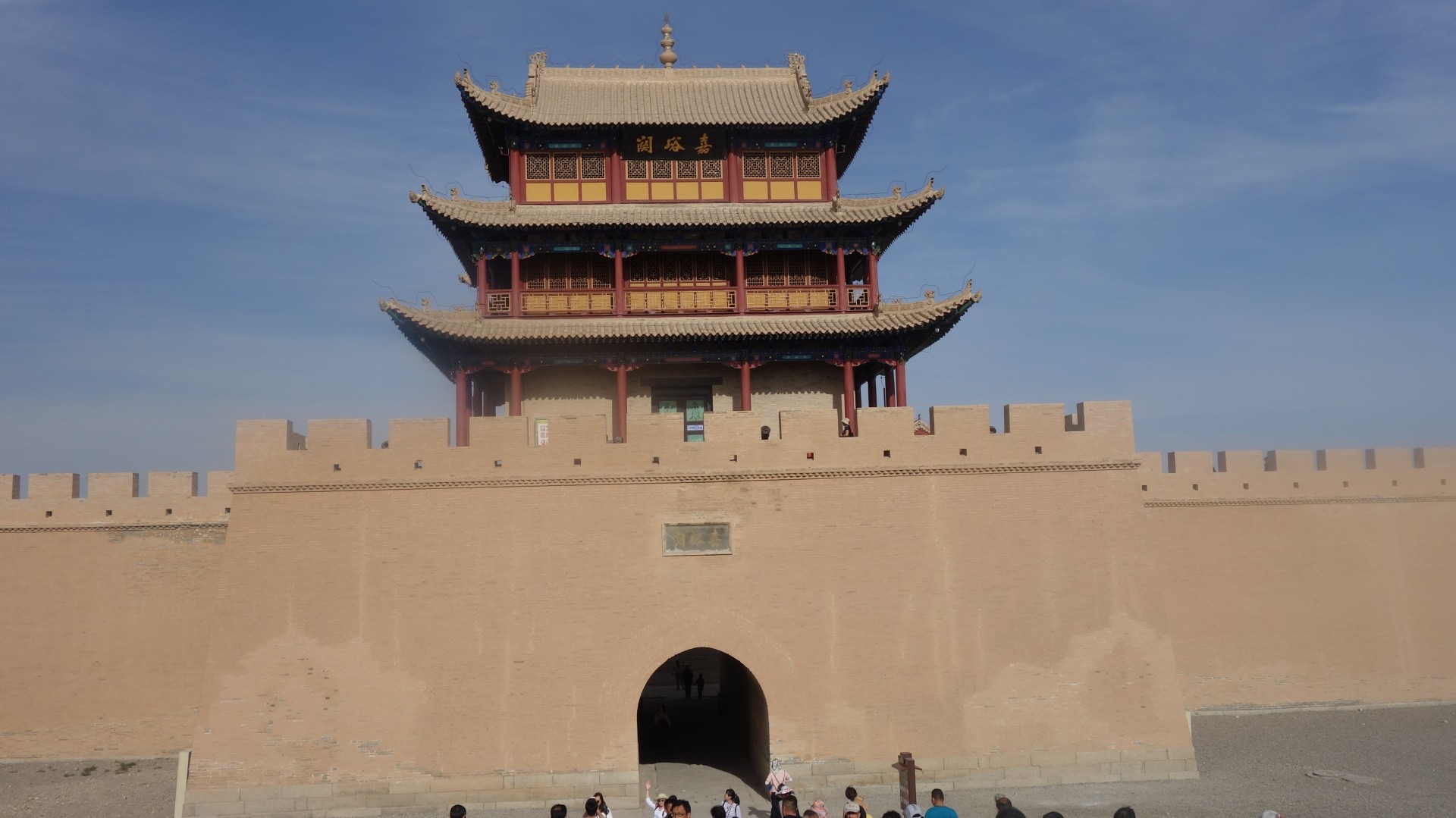 The start of the great wall, once made of rammed earth is a recent cheap reconstruction. The mud finish already crumbling away to reveal the bricks beneath. Concrete gate posts have been sculpted and coloured to resemble wood, they’re a fitting tribute to the disdain shown for ancient craftmanship and modern travellers. 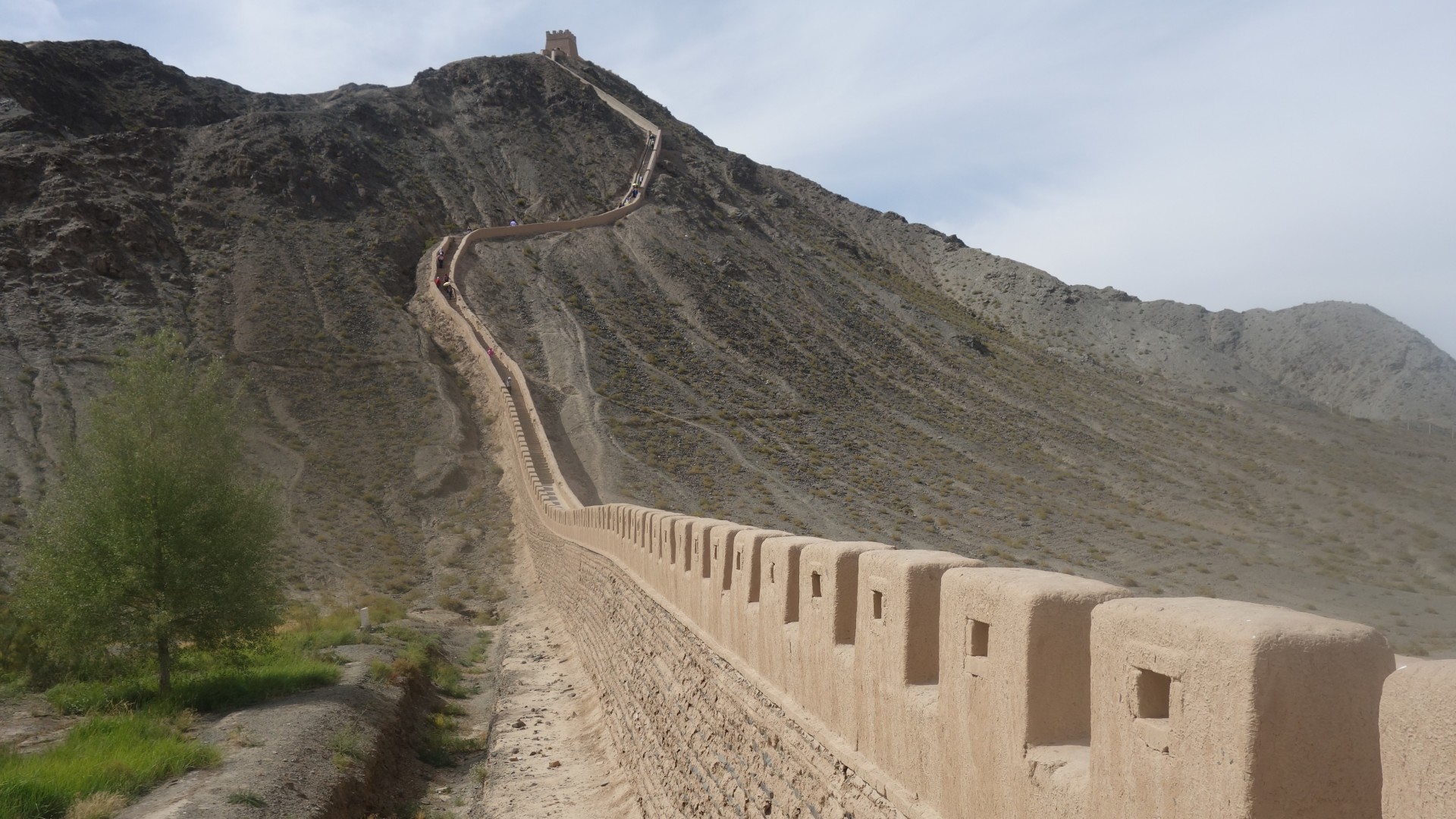 It was a relief to land in Dunhuang the last stop along the Hexi corridor before Xinjiang. 5 days of travel, the noisy stations and tour groups, of pushing crowds from tour coaches. Dunhuang is clean, quiet and orderly. Cars use their horns rarely. Bikes park in neat rows along the tree lined streets. Nothing is broken, side streets are rubble and rubbish free. It’s a benchmark of how all China could be like. The city seems to have avoided the trends of ugly architecture that blight other centres. It has resisted the glass high rises and the shopping malls of designer brands. Instead all efforts and expenditure is for the tourist. It’s shamelessly touristy. Twee signs in English, a plethora of hotels. Prices are higher, but I’m happy to pay for the organisation and order it brings. Of course, the only reason to come here is for the Magao caves and the sand dunes around the crescent lake.

The latter lies on the edge of the city, a short taxi ride. Inside, every space is reserved for some chance to extract money. Shoe covers, plastic bags for mobile phones and cameras. Camel rides, helicopter rides, dune buggy hire, sledges.  All accompanied by a never ending loop of mood music. 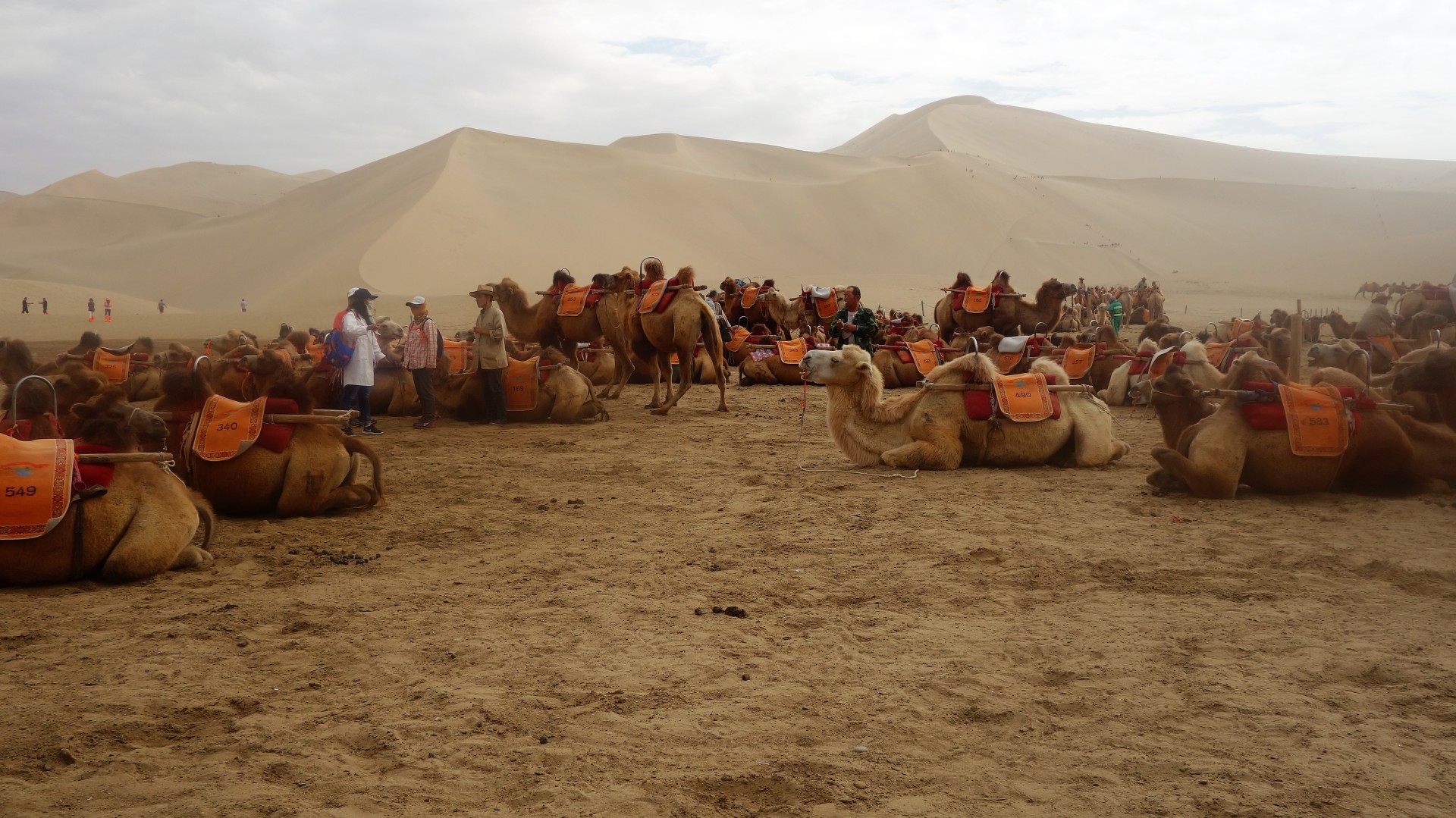 The whispering dune the thundering dune, named for the sounds made by the wind over the sand, are unable to be heard above the cacophony. 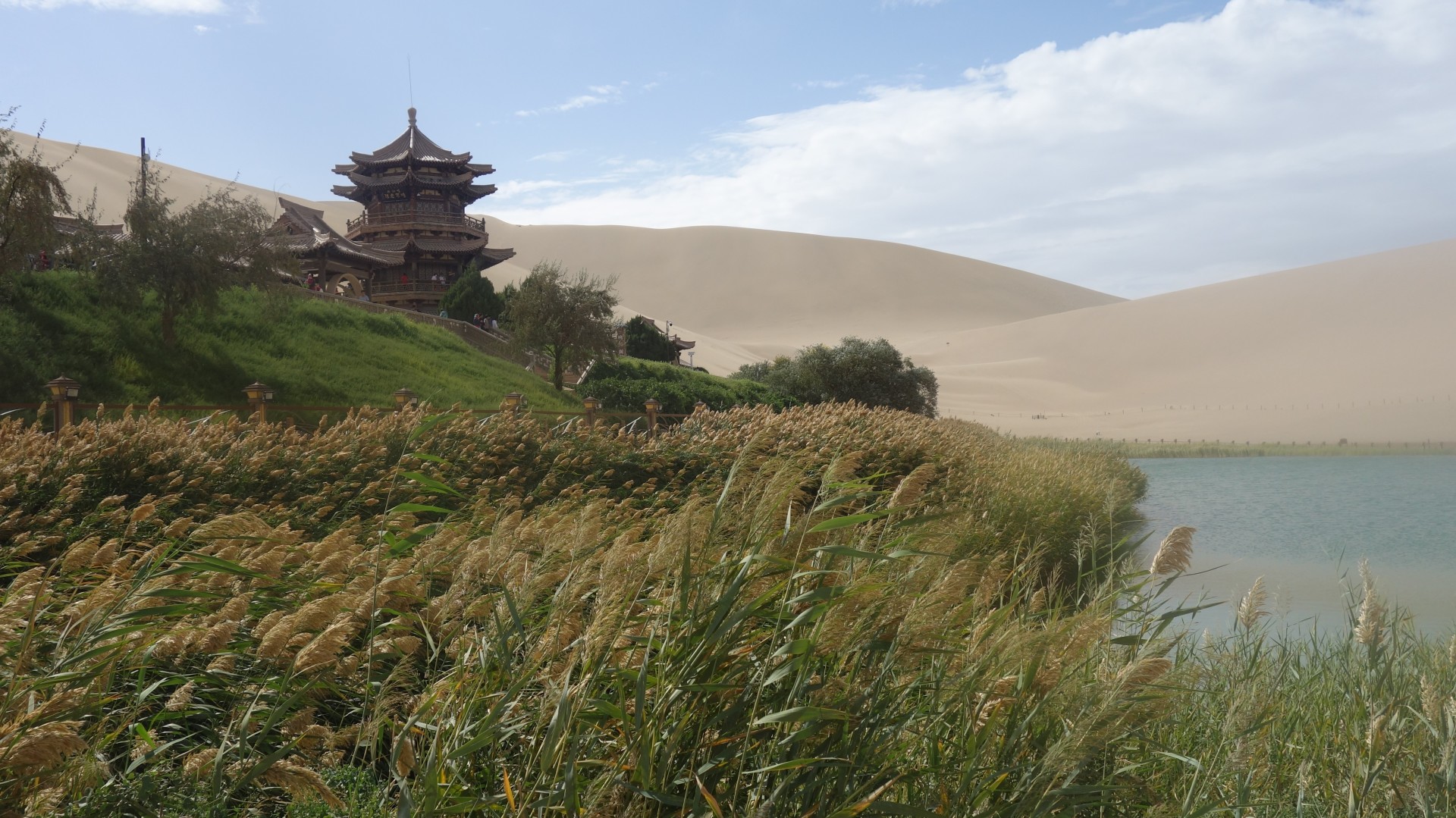 You can walk beyond the first dune, I’m told and it’s peaceful and you’ll be alone, but the last days of travel and sun leave me little strength for the necessary climb over the mountains of soft loose sand.- Maybe a few years ago… 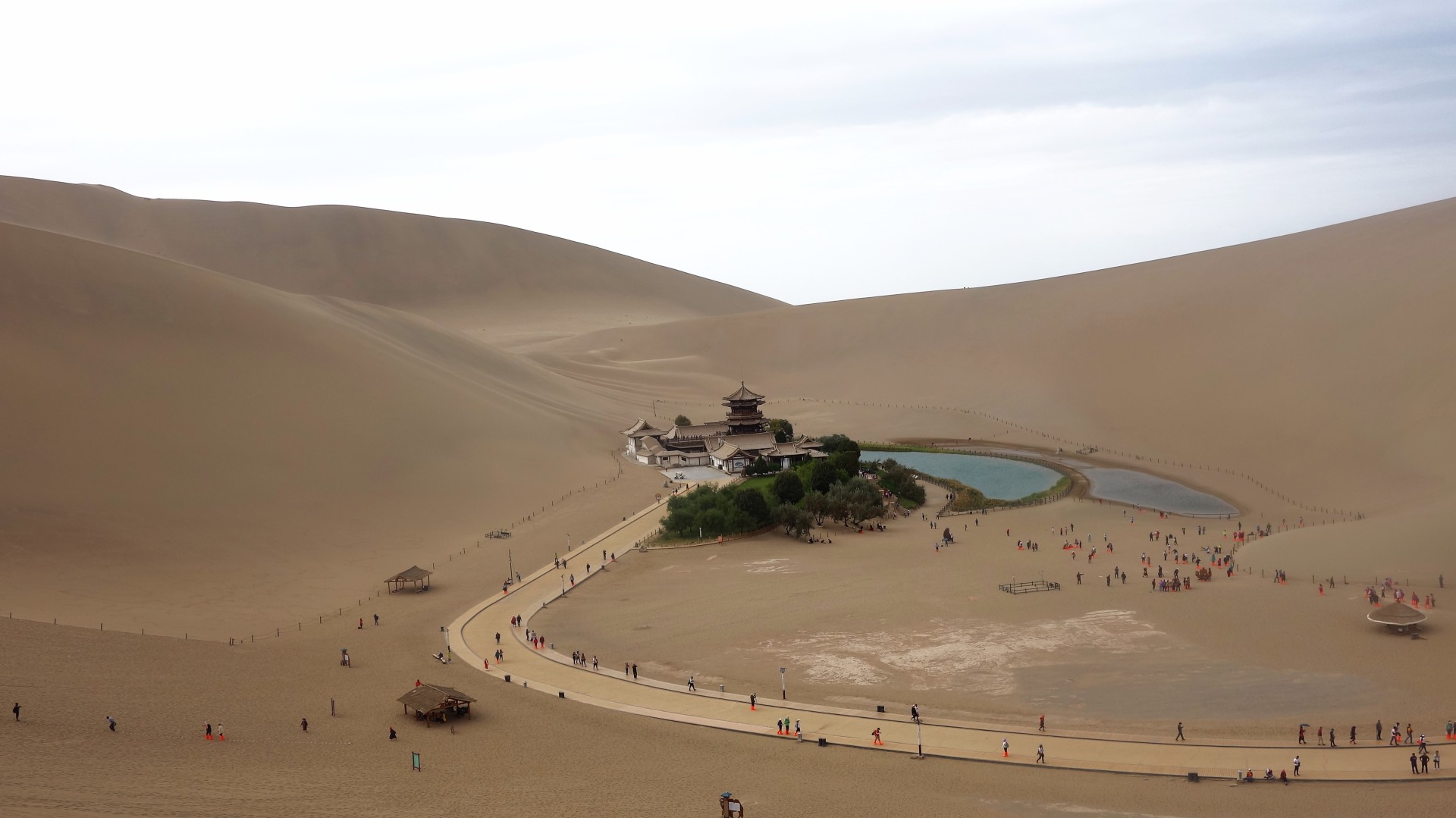 The other attraction is the Magao caves, a collection of Buddhist statues  and art caved and coloured into the rock by travellers on the silk road 2 century’s ago. The UNESCO site only allows 40000 visitors a day and tickets need to be purchased in advance. The  tour starts with an entertaining film about the history followed by a second film in an astro done explaining some of the caves. It’s useful as only a selection of caves are open at any one time. 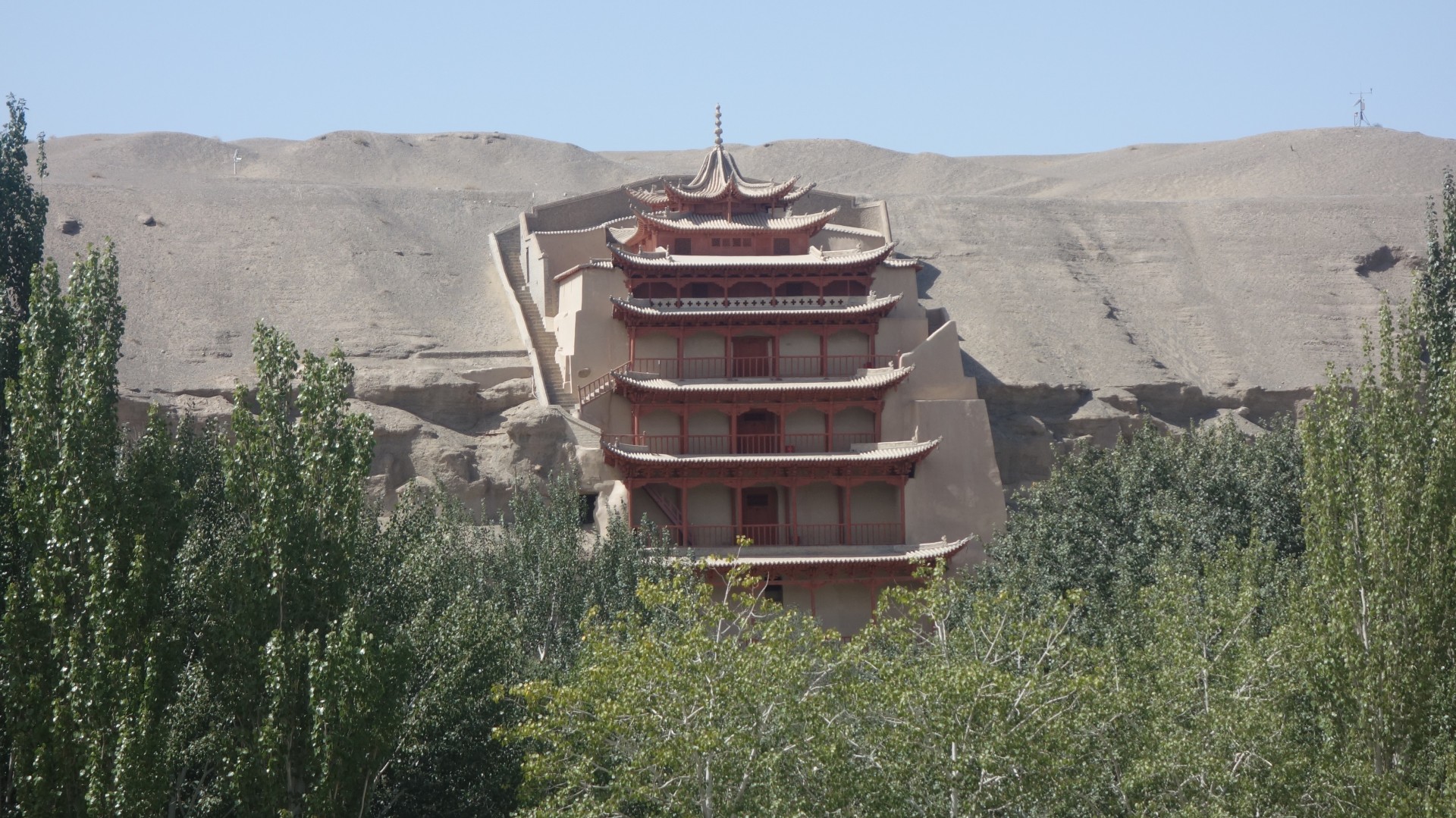 The caves themselves are another long, shuttle bus, journey from the gate. Given the coaches are the only traffic, the dual carriageway provided seems excessive. An officious guide chaperones us in and out of the caves and delivers a monologue about each one. We shuffle in and out, no questions asked. 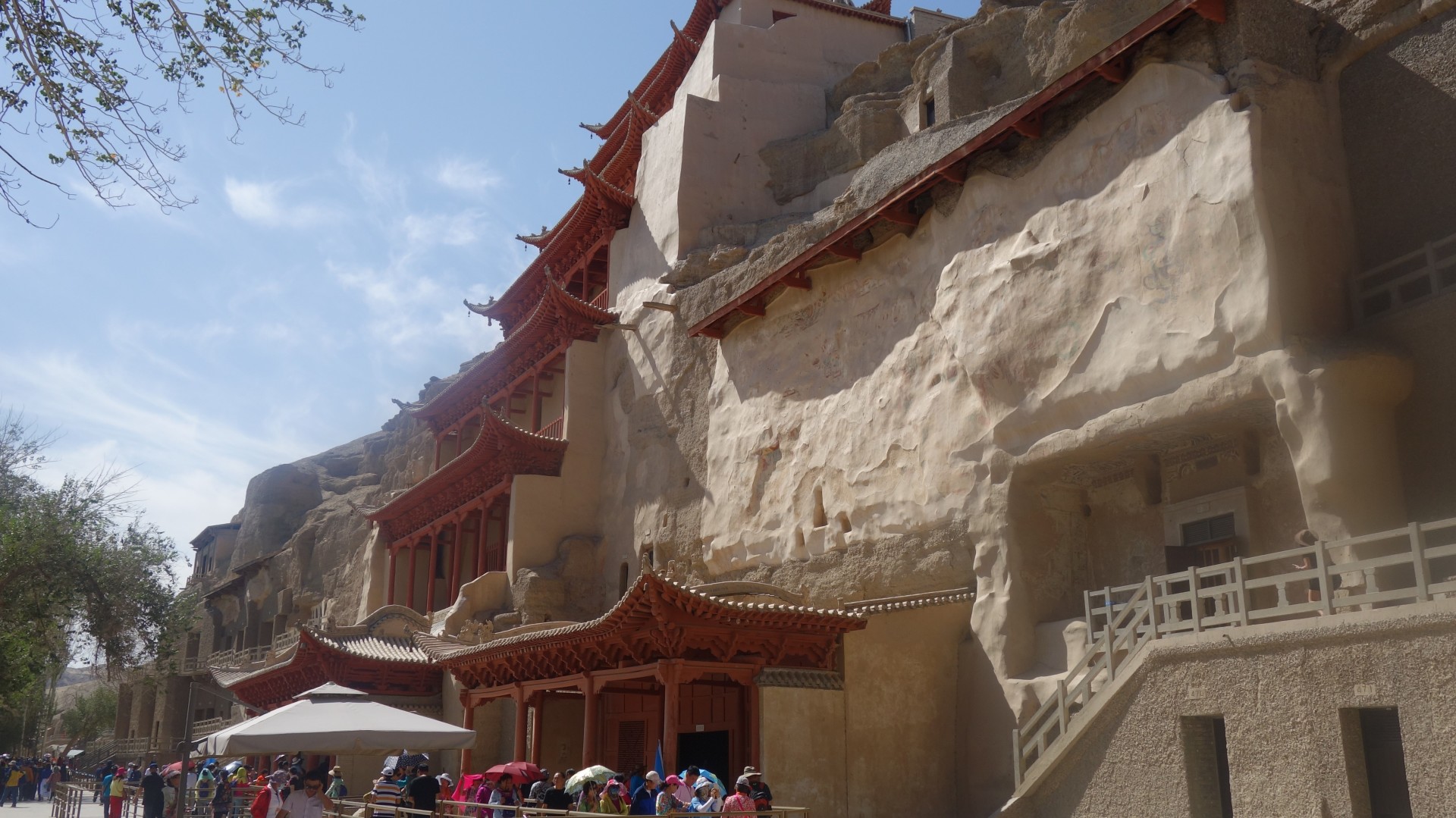 The night market here is a wide long street of restaurants ending in stalls selling dried fruit and pashminas. The area is lively with outdoor tables selling the same range of bbq food and beer and live music. 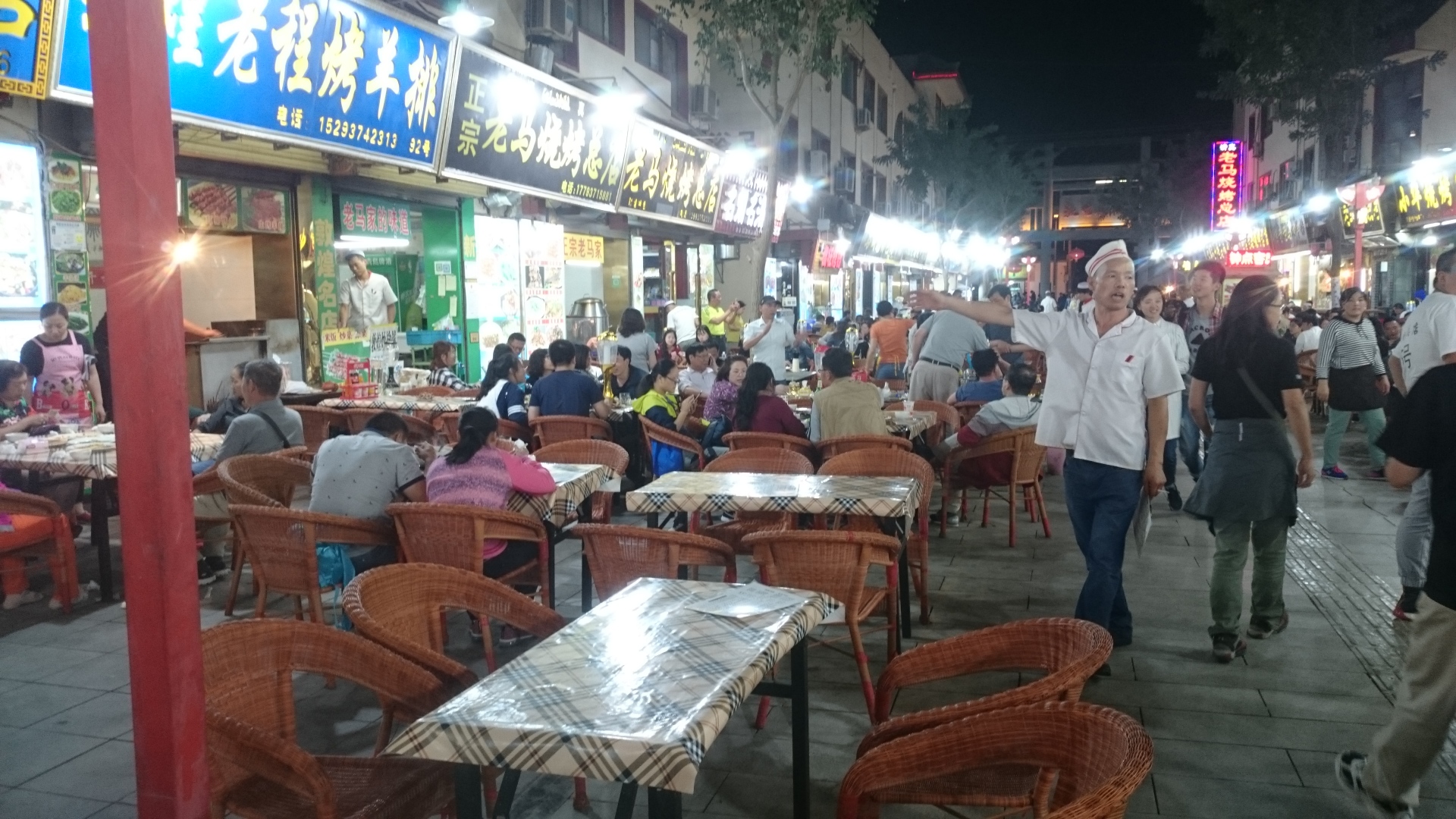 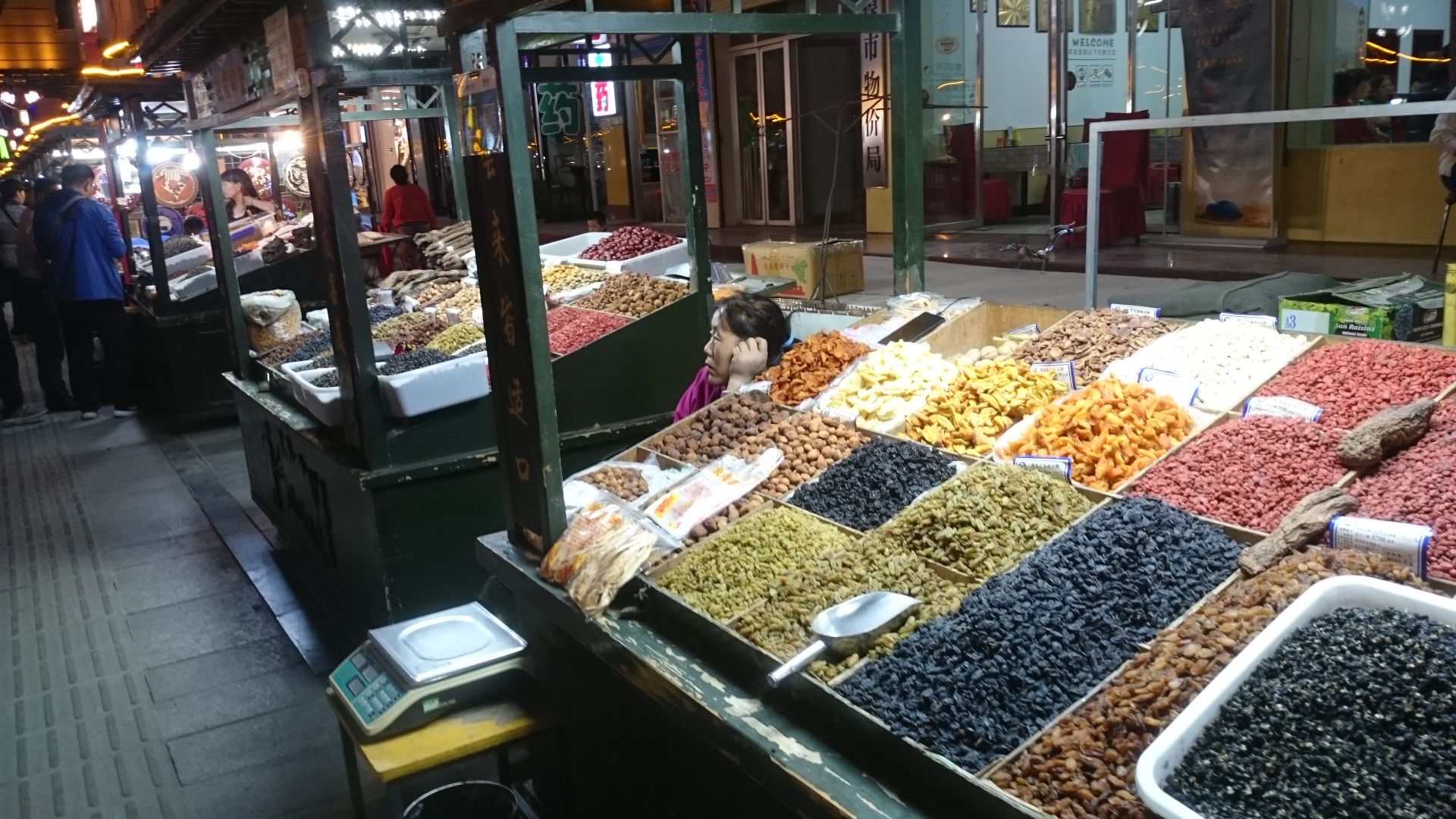 On the second night we take in a live show on the history and myths of the silk road the role of this oasis town. Its an extravagant display of lights, dance and music set against the backdrop of the desert. A good way to relax, on our last night in the old middle kingdom, before travelling on to Xinjiang – literally new land. 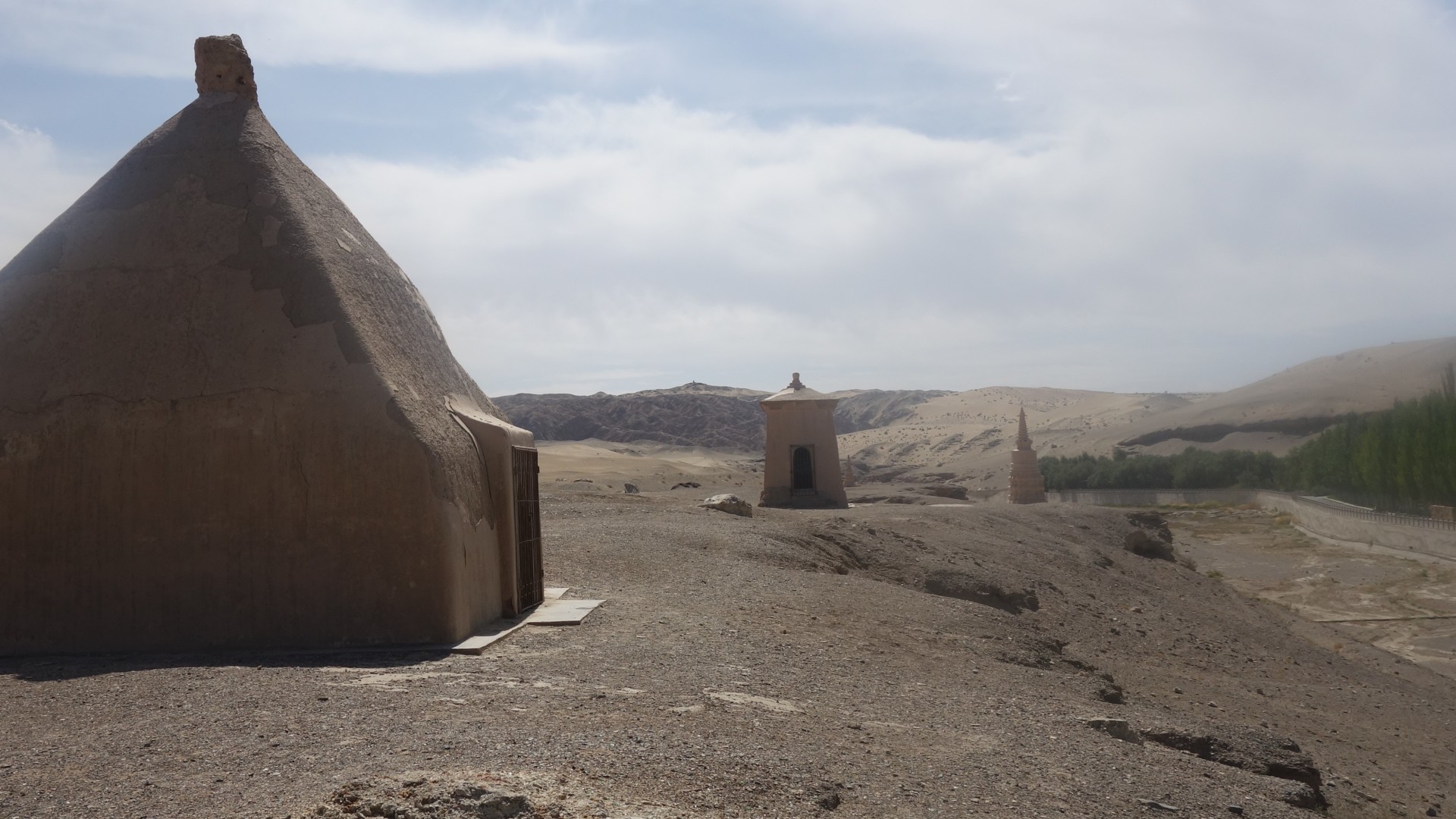