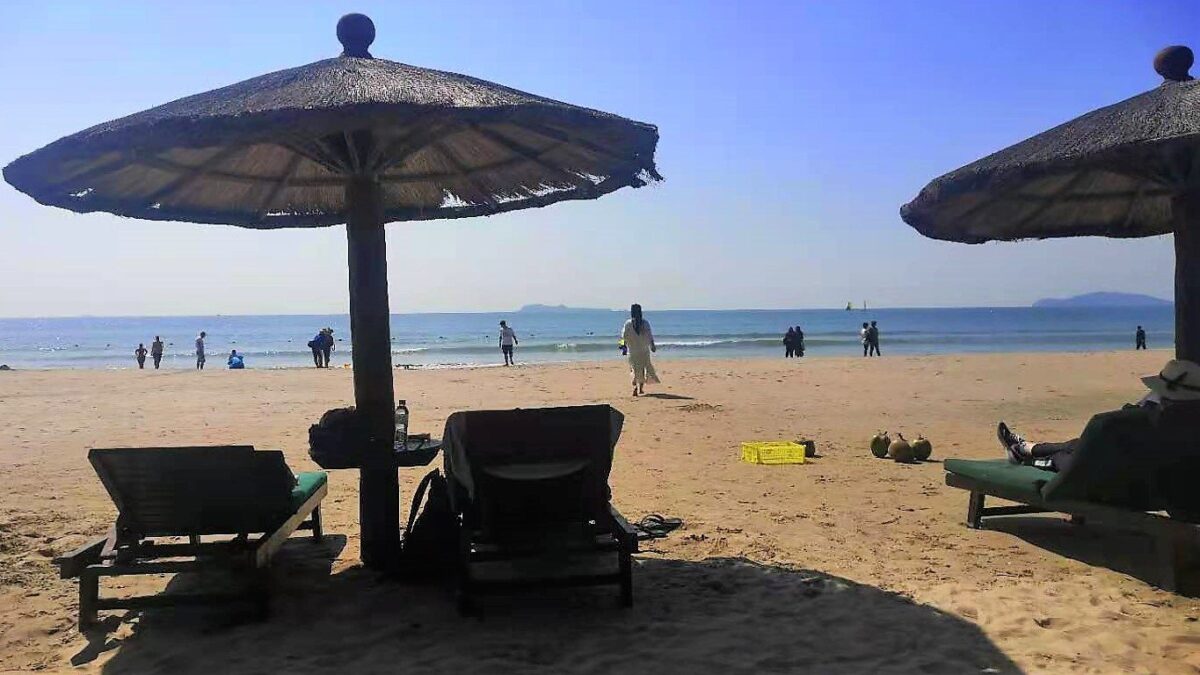 Hainan is a subtropical oval blob of island that sits in the south China sea. It’s the furthest south you can travel in China and is over 3000 kms from Beijing. Because of its warm winter weather and Sandy beaches it has become a popular tourist destination among Chinese people looking to escape the freezing dryness, that most of the country endures, between Christmas and Spring festival.

Over the last 20 years tourism here has boomed. Dubbed the Hawaii of the East, massive developments of hotels and apartments have sprung up along the coast like the waves of construction that has spread along the Mediterranean coast. But despite emulating European resorts with the sun lounges, swim up bars and Bob Marley on the loop, it remains very Chinese. Hainan’s take on Beach culture never quite produces a hippy or surfer vibe, a high-end paradise or a hedonist party experience.

In the North end of the island, just 30kms across the Hainan strait from Zhanjiang is the old French port of Haikou. It’s the capital of the island and certainly its busiest city. Some of the buildings have been restored in the old part of town (Qi Lou Lao Jie) and it is becoming a dining and shopping haven.  Hainan is known as ‘coconut city’ and you soon see why; they are piled everywhere ready for eating or drinking or just holding down a sun umbrella. The cuisine is full of coconut and pineapple and is less spicy than mainland food. Famous dishes are Hainanese Chicken Rice and the delicious Yezi Dong – a coconut jelly pudding. Behind the attractive old streets of the town is a maze of narrow alleyways which provide a glimpse of real daily local life. 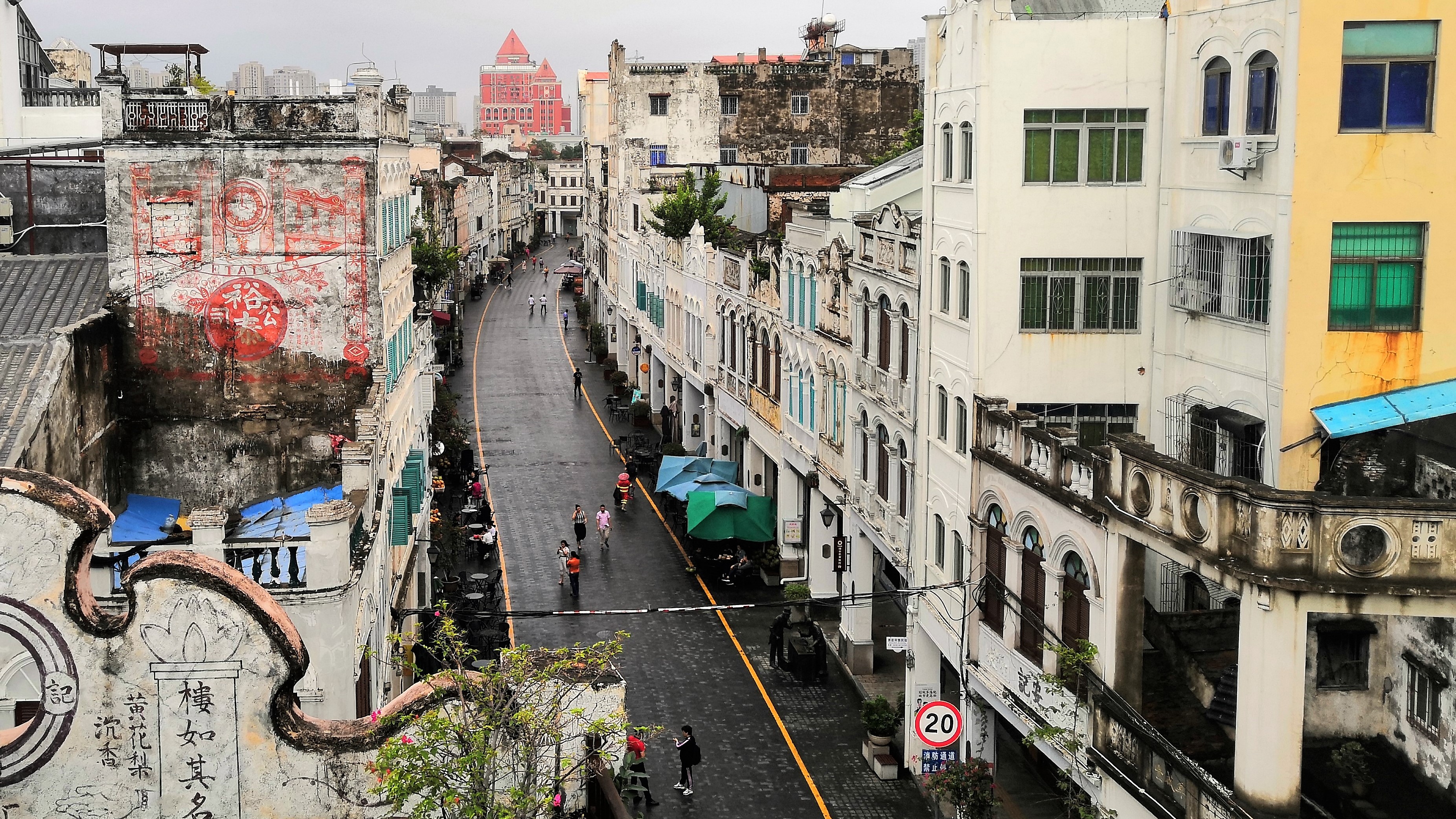 A highlight of Haikou is the sea food market. This is a spacious hall selling buckets of live clams, oysters, crabs, octopus and fish. The seafood is incredibly fresh and cheap. You buy what you want, then take them upstairs to one of the numerous restaurants to cook. Another draw, at least for Chinese people, is the duty-free shopping mall. A huge airport like out-of-town complex of designer shops. You buy the items and they seal them and send to the airport for you to pick up when you leave. 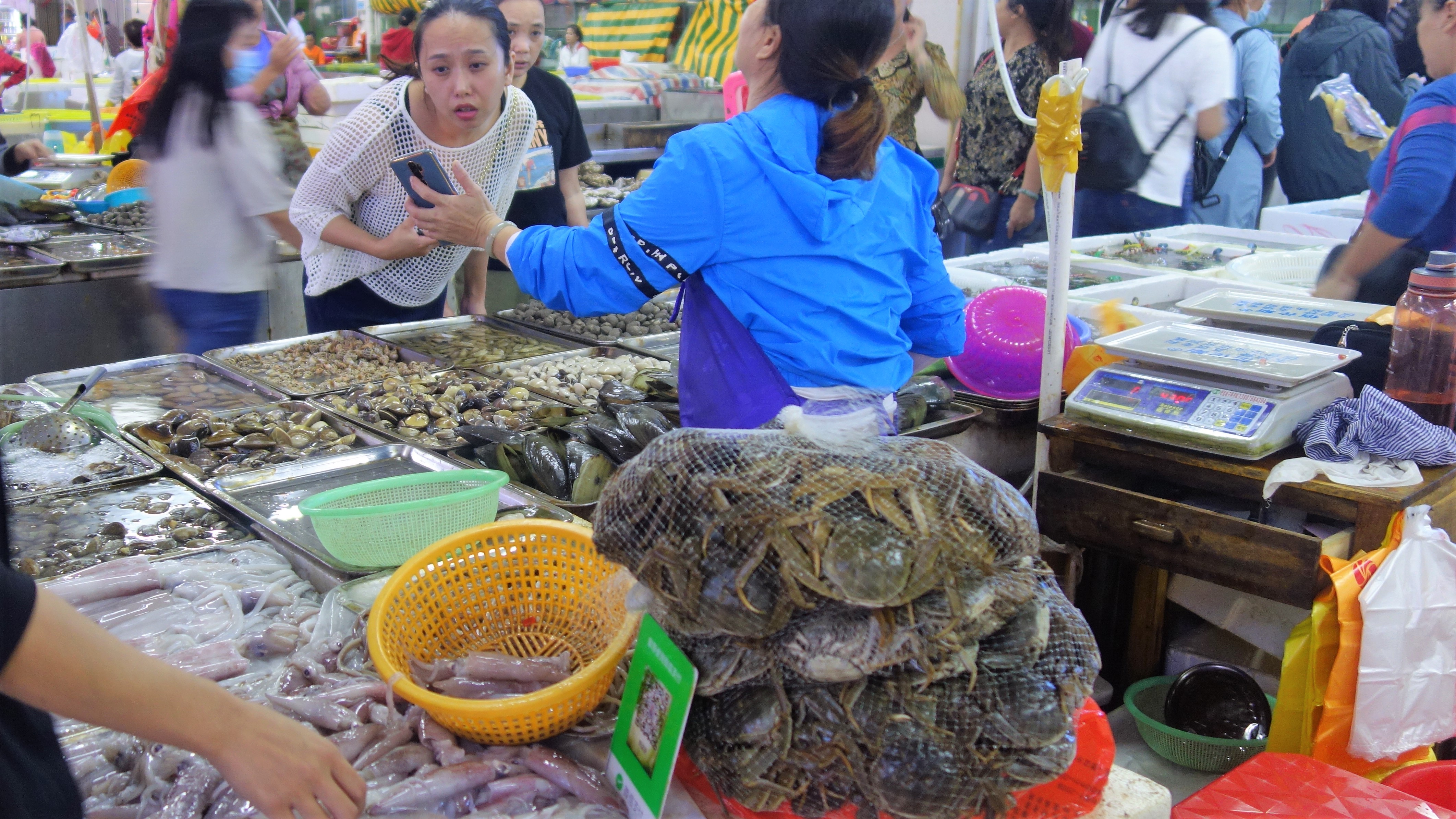 You can take the ferry from the mainland or fly direct to Haikou . There is a high-speed train that runs between the city and Sanya. It’s a fast and relaxing journey completed in less than 2 hours, but its route neither passes through the mountainous centre of the island, nor close to the shore.  As a result, the air-conditioned ride is a disappointingly monotonous view of palm trees, farms, and anonymous villages.

The most popular destination on the island is Sanya, a modern relatively small city built around a few bays. It’s located at the southernmost tip of the island and comprises a range of resorts near the beaches and cheaper hotels set further back. It’s so popular with Russian visitors that many signs are in Russian as well as Chinese. While it’s not an attractive or historic city, it is clean, and the atmosphere is far more relaxed than mainland usual.

People come for the weather and the beaches which are sandy, wide, and slope kindly into the warm and clean South China sea. It looks very safe, but there are warning signs of jellyfish and disclaimers about other swimming dangers posted at the main entrances that are off putting. It’s not clear how real the dangers a the Chinese prefer to take selfies from the water’s edge than swim. There are no lifeguards, but there are CCTV cameras dotted along the tree fringed edges.

Dadonghai bay area is the busiest stretch of beach with banana boats, fly boarding and a long promenade of restaurants and bars. Some have live performances in the evening and it’s pleasant to sit in the lantern lit decking sipping cocktails a stone throw from the sea, trying to catch some breeze. The cuisine is mostly sea food and BBQ, the price and quality are standard for China. 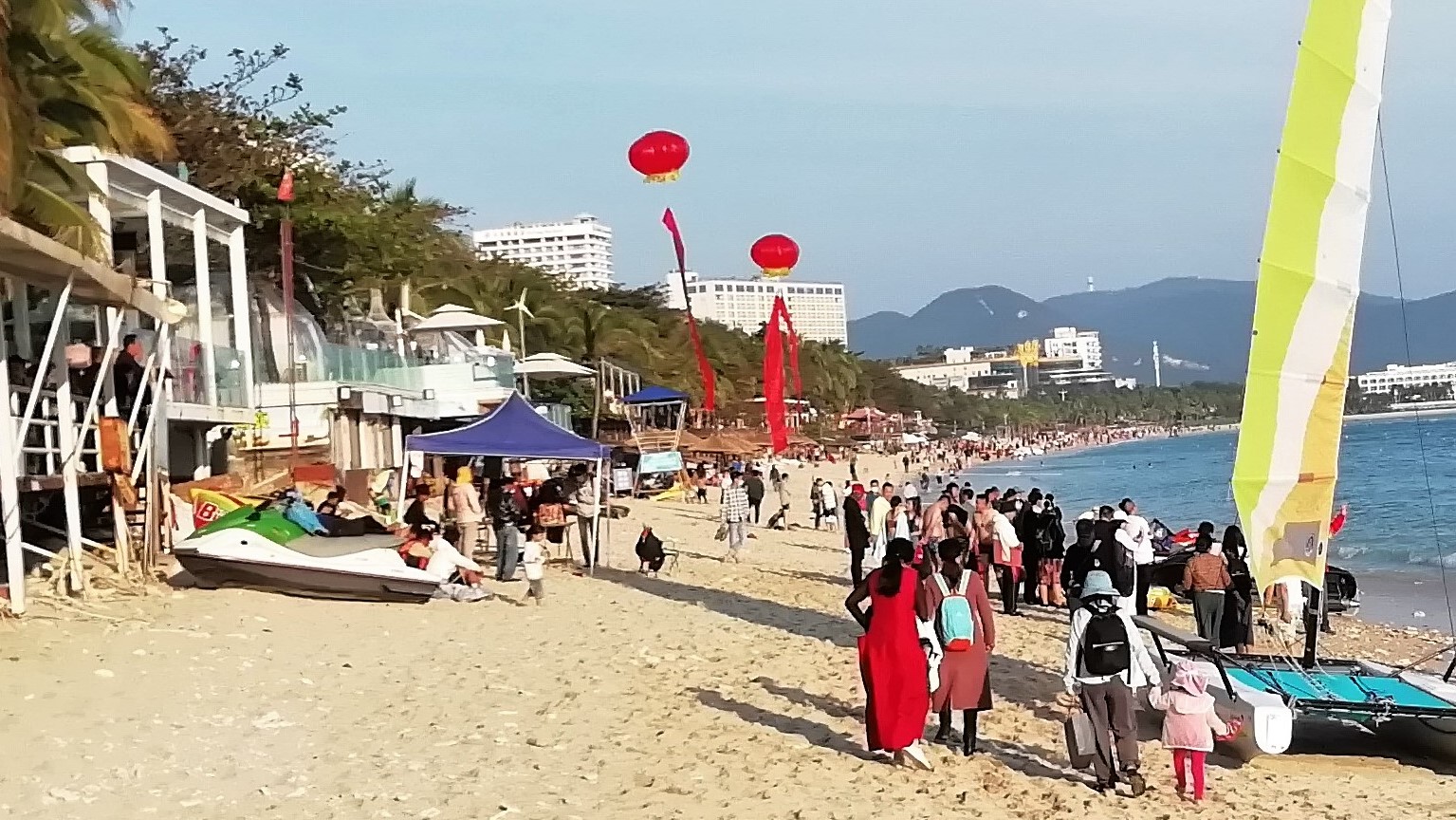 Further along is Yalong bay. The crowds thin out as restaurants give way to palm trees to create a more picturesque scene. In one part there is a fake church, a shed and an old Volkswagen camper van for use as a backdrop for wedding photographs. It’s very popular and lines of brides and grooms with their camera crews can be found waiting to have their pictures taken. 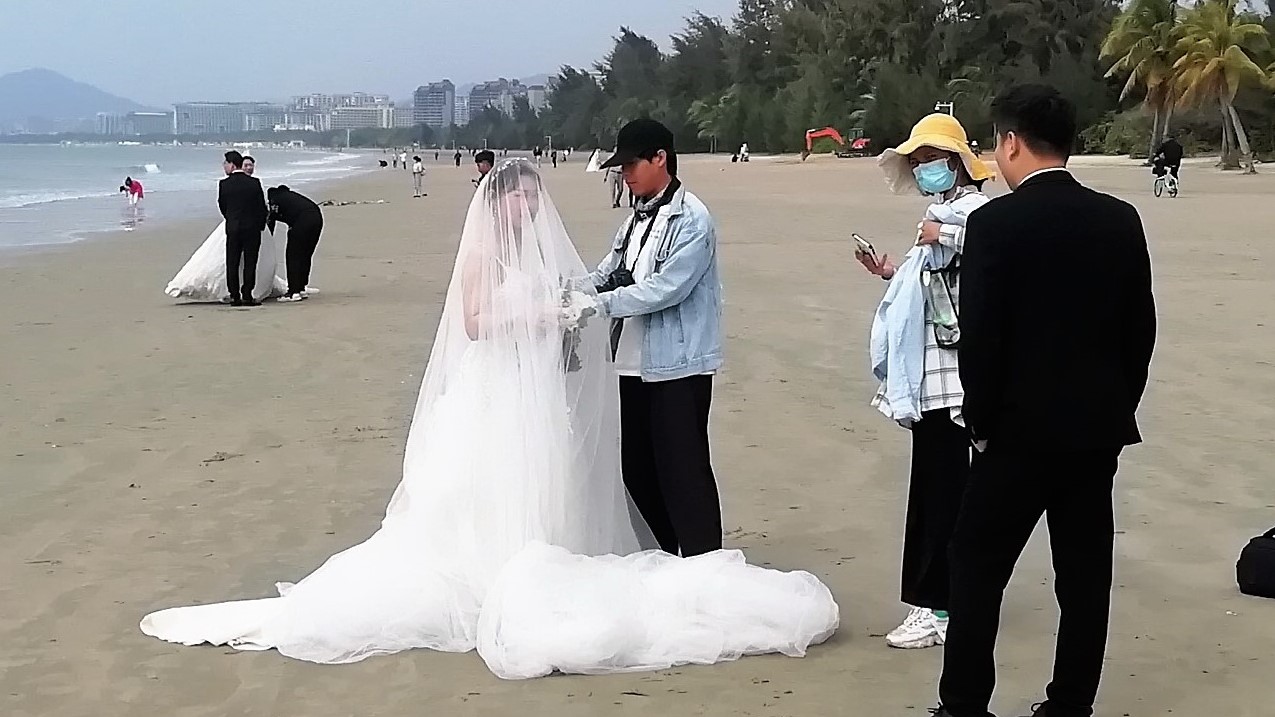 From Sanya you can take a long 90-minute bus journey into the island’s interior. A popular place is around seven fairy mountains near the city of Baoting. The centre of the island is covered in thick tropical rain forest and is home to the Li and Miao minorities who were the original inhabitants of the island. The bus journey crosses numerous rivers and passes interesting villages as it twists and turns along the busy main road. There are a few stops where you can visit minority villages and see costumed women demonstrate various handcrafts.

Being rainforest, it is wetter than at the coast and also cooler and around the high season at new year it can feel quite chilly in the evening. Tourism is less developed than at the coast and caters exclusively for Chinese visitors- western dishes are non-existent as is night life. However, it’s a nice diversion from the beaches and if you are interested in wild-life it’s a good location. It’s likely you will see a rich variety of birds from the hotel window while you’re having breakfast.

The climb up to Seven fairly mountain is a challenge that appears to appeal to older people. The route is a long series of steps through the vegetation that is too thick to see any views. There are several stops along the way selling drinks and snacks often playing pop music. Surprisingly there is less wildlife to see than around the resorts below.

In the last stage of the route there is a near vertical climb up a high pockmarked rock face with two chain handholds. Its surprisingly dangerous and few people dare to attempt the summit. Once you shakily reach the peak there are great views over the island and depending on the weather, drama from the clouds sweeping about you. 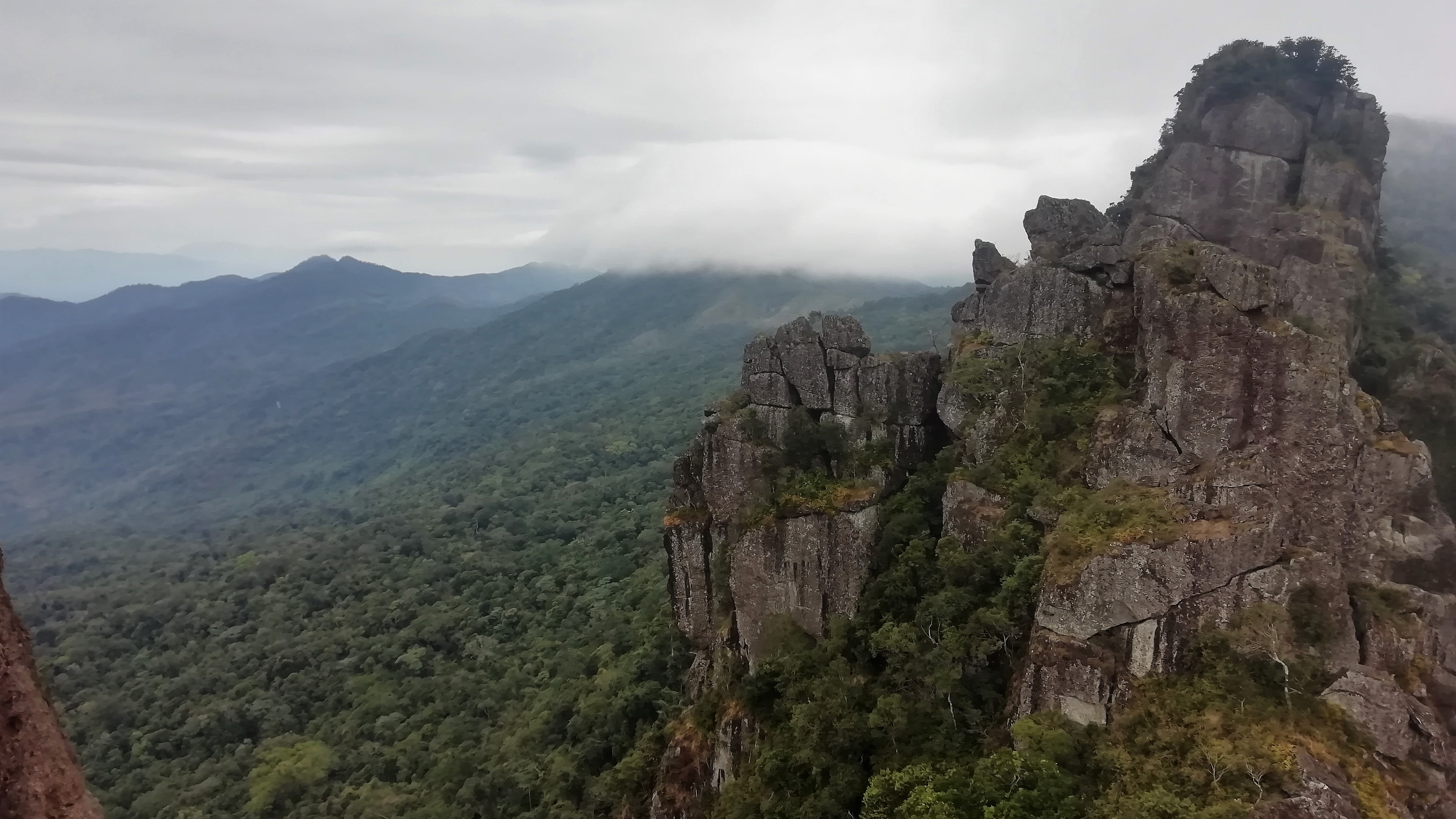 The next best thing

As a foreigner, Hainan would not be the first choice either for a beach holiday, to see colonial architecture or hike through rainforests; there are much better examples and experiences to be had. And if you are interested in Chinese culture there are other parts of the mainland that have more to offer. But if you must be in China, perhaps marooned by an epidemic, or accumulating weeks for your green card and crave a short easy break abroad, then this is the next best thing.