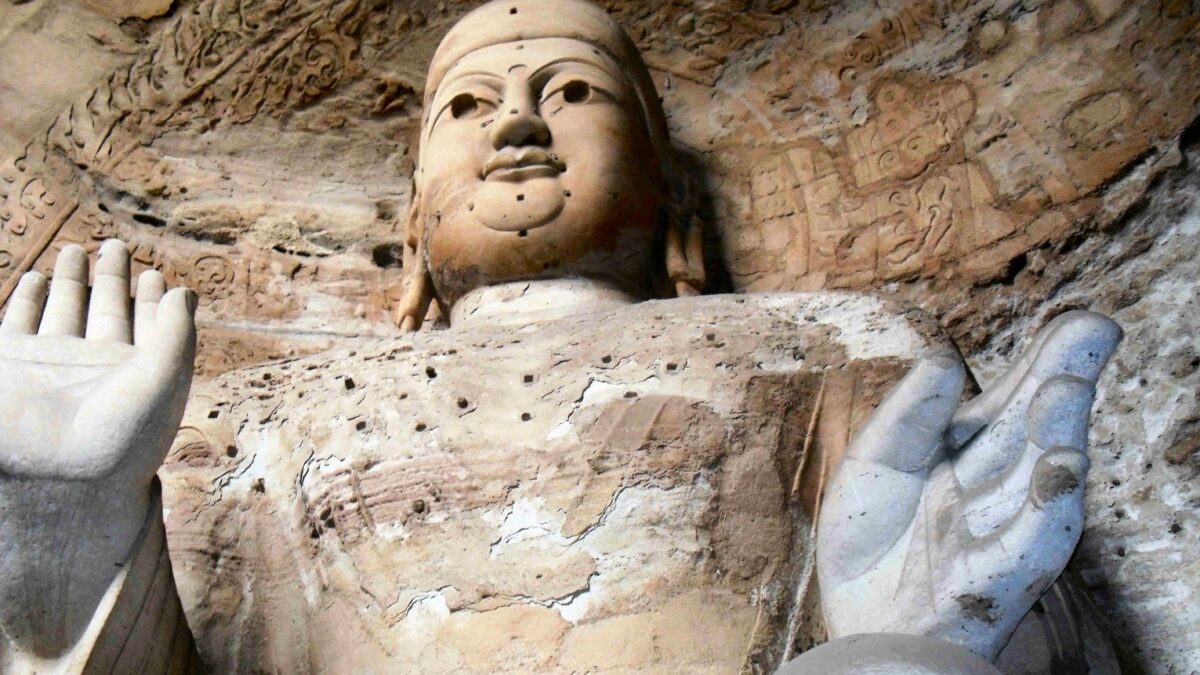 Datong was my first trip out of the city. My first venture away from the familiar environment of a modern metropolis into China proper. I was ready for something more exotic and mysterious, something more like my childhood fantasies of the orient. And maybe because it was the first journey or because it was approached without prior expectation, it has remained the most memorable.

I took the overnight train from Tianjin. My first sleeper, booked to leave at nine in the evening, on what was described as ‘hard beds’. I imagined lying on a stiff wooden board in an over-crowded carriage. I wasn’t expecting to sleep, but I slept like a baby. China passed outside, unseen in the total darkness as we swept through Hebei and onwards into Shanxi.

The night train arrives early in the following morning. But I had already woken, curious to know what new land might lie beyond the window. The same bright sun hung over a pale yellow earth. The flat land had folded into low dry hills, steep crevices scratched in its sandy soil whose shaded bottoms sheltered small clumps of trees. It was clearly somewhere else. A train fare costing less than a night in a cheap hotel to journey further than is possible within the borders of England. I’d travelled all the night, but when checked on a map, the distance made barely a scratch across this huge country.

My main reason for visiting Datong is the UNESCO dedicated World heritage site of the Yungang Grottoes and the Hanging Monastery. Both sites are as impressive as anything in China and the caves are worthy of the description of ‘the greatest ancient stone carving art treasure houses in the world’ They are the only truly ancient wonders remaining in what was a capital city for 3 dynasties. Once it boasted royal palaces, gardens and temples, but through centuries of war and neglect they have all disappeared. Today it is better known as the capital of coal and for its pollution, an image it hopes to lose as it rushes to rebuild. One large area sprouts a cluster of smart high-rise buildings, but more impressive is the re-construction of its vast city walls and historic architecture aimed at recreating its ancient glory and a modern tourist industry. 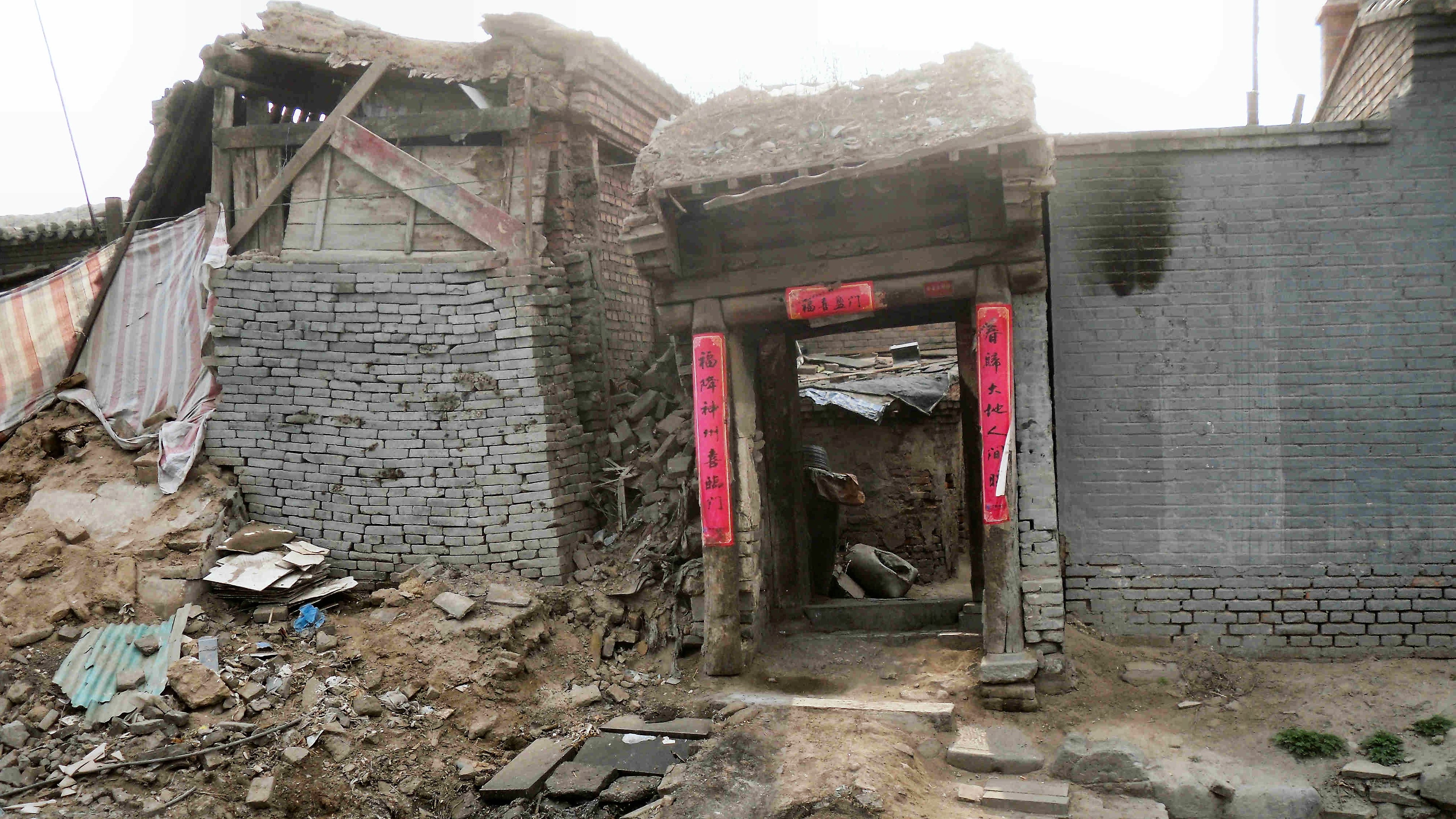 As I wandered around this part of the city the old hutong like single level houses were being bulldozed to make way for ‘older’ buildings. Inside the clean new city walls, the fresh, smart structures of grey brick, stout wood doors and ornate roofs stand solidly beside the soon-to-be-replaced ramshackle and crumbling homes. It could be ironic that the old town is being pulled down to build something that pretends to be older, but I feel the old town isn’t that old; it has just prematurely aged. A consequence of the same neglect that wore down the previous capitals. Hopefully, the reconstructed parts will suffer a similar fate because at present they look too new to feel authentic. The new imperial buildings may be a sham, but the grand ambition and confidence required to build them is typically and timelessly Chinese. 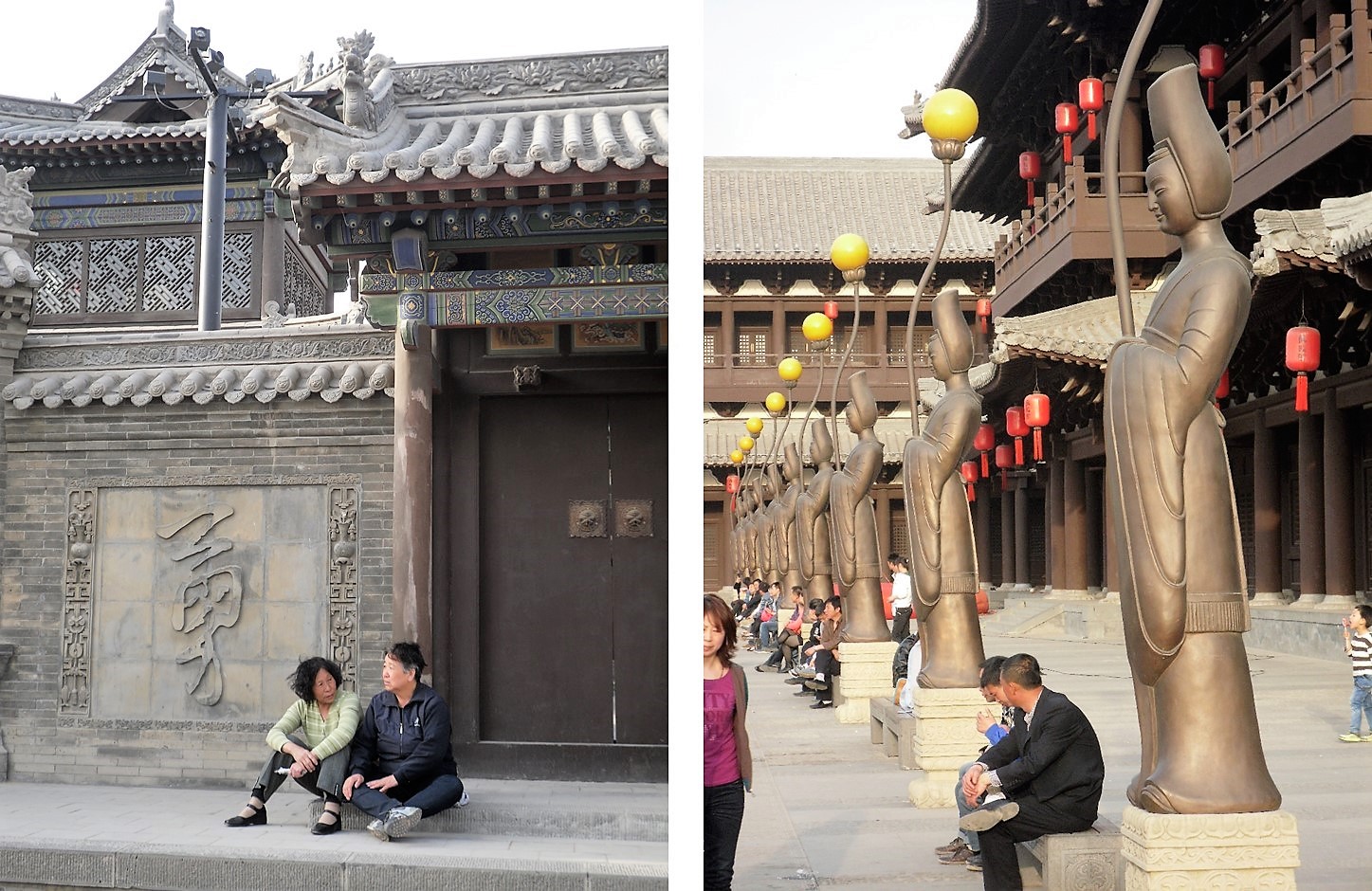 I hire a car and driver for the day to see the caves and the Hanging Monastery. They are not far from the city, but it’s better to spend the time wandering slowly around the attractions than stressing over crowded buses. Datong is cheap and with some shopping around and haggling you can get great prices.

I arrived at the Yungang Grottoes feeling disappointed at the new construction. The temple and pillars of palm trunks supported on elephant’s backs are intended to be sympathetic to the period, but like the old city they’re too perfect, too contrived and too excessive. But don’t worry, the modern construction is just the visitor entrance, somewhere to put the ticket stalls and tourist tack. And despite the enormous amount of souvenirs on sale intended to aide memory of the visit, the commercial sham is quickly forgotten once you’re in and climbing up to the grottoes. 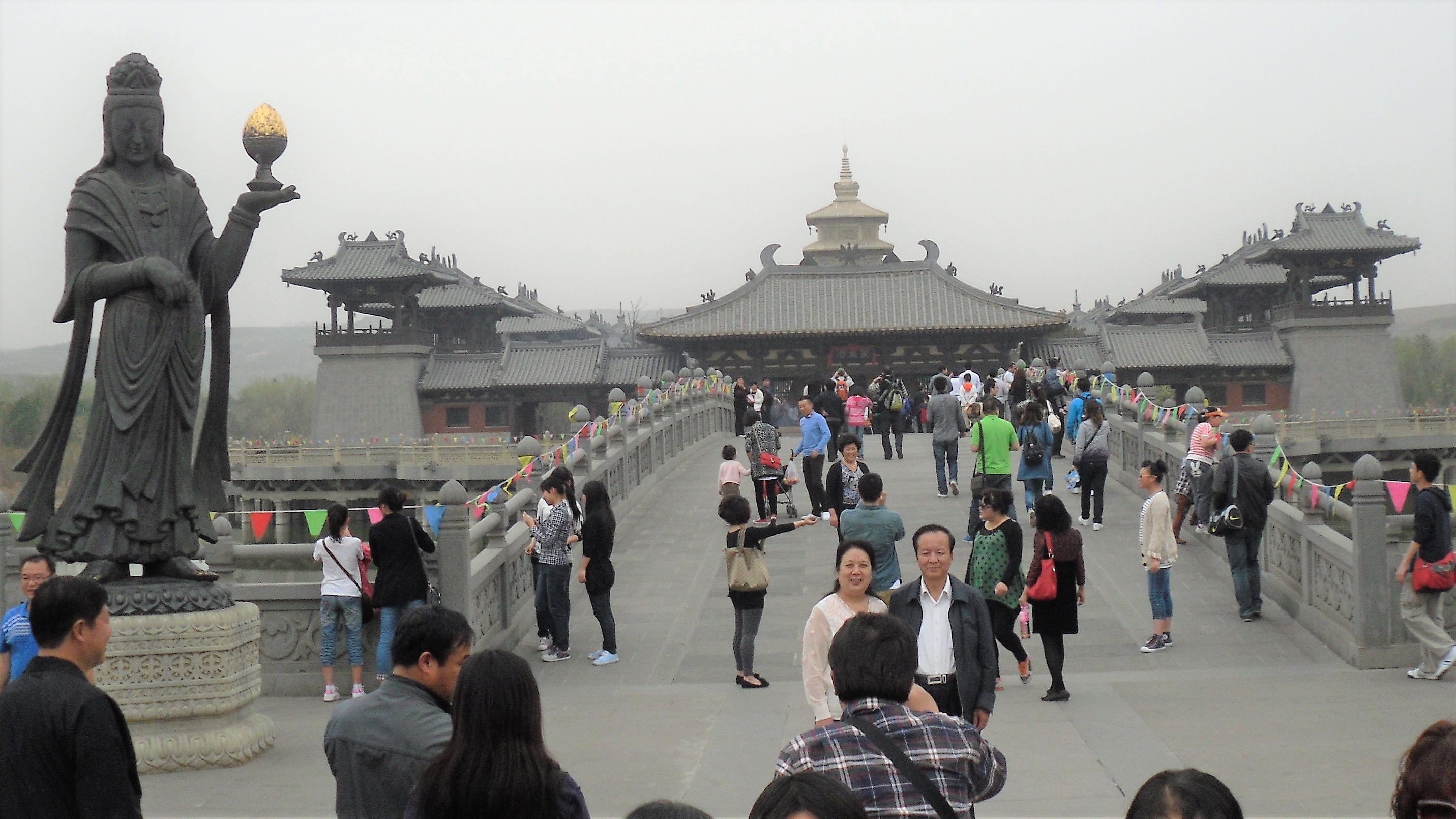 They are magnificent. The mountain-side caves and recesses are filled with 51,000 Buddhist statues and carvings. The largest is a seated Buddha. A 17 meters tall carving, staring out into the distant haze. Some caves are fronted by wooden structures, but many are open to the elements. There are clear signs of damage by the weather and some vandalism, but there are plenty that still retain their bright colours and intricate details. After the faux antiquities of the city, these barely renovated relics are a wonderful example of genuine history. The effects of time, the actions of Japanese soldiers and the red guards don’t depreciate the site, they add layers to the record of China’s past and perspective in the serene face of the Buddha, unmoved by the cycles of events around him. 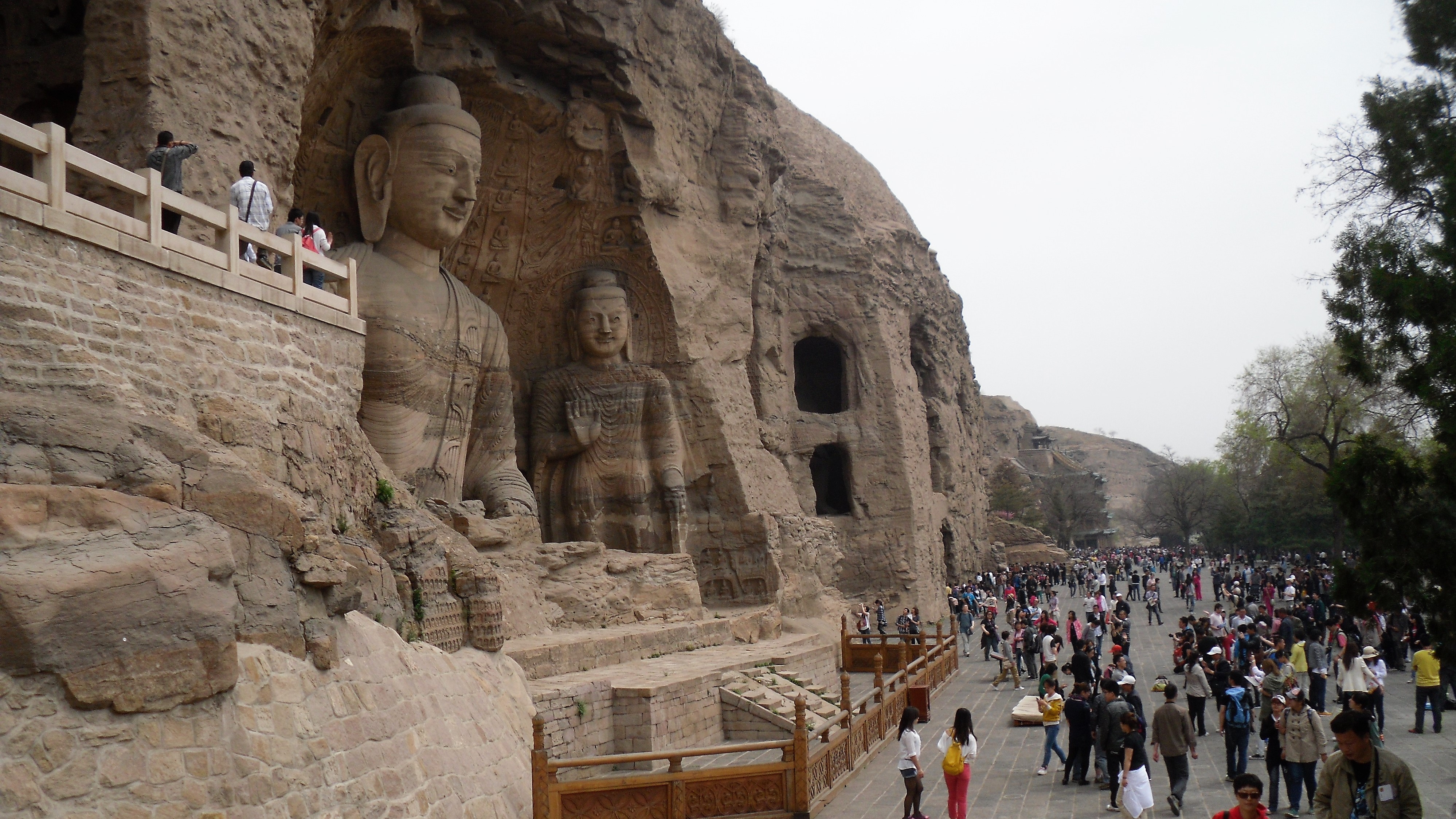 Buddha watching over the city

After lunch it is time to drive to the Hanging Monastery. It’s not as vast as the cave complex and because of this cannot accommodate the large numbers of visitors that are likely to be queuing. The approach provides good opportunities to take pictures of the structure, to wonder how the temple was built high up on a cliff face and how it can support the huge numbers of tourists intending to tramp up to the suspended rooms. 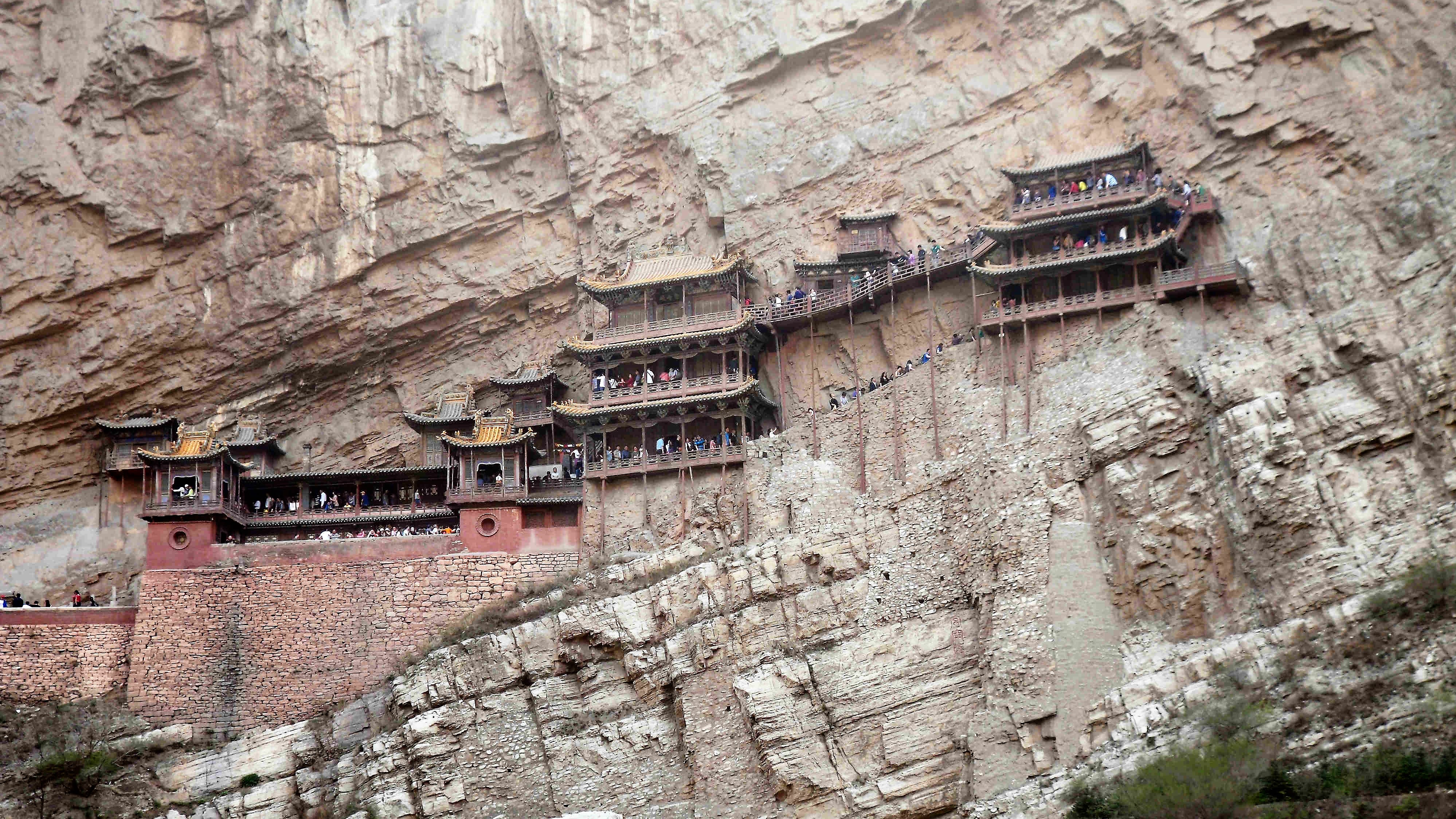 Although there isn’t much to see inside, it’s definitely worth the wait to wander around its wooden walkways and see the intricate ornamentation of the roofs and beams. From the top you can look out over the parched valley, and the rickety thin dry timbers that precariously balance the building against the rock. It feels solid, but I sense it was never intended to support so many feet and I expect the thing to collapse at any minute, flinging us all to certain death on the rocks below. 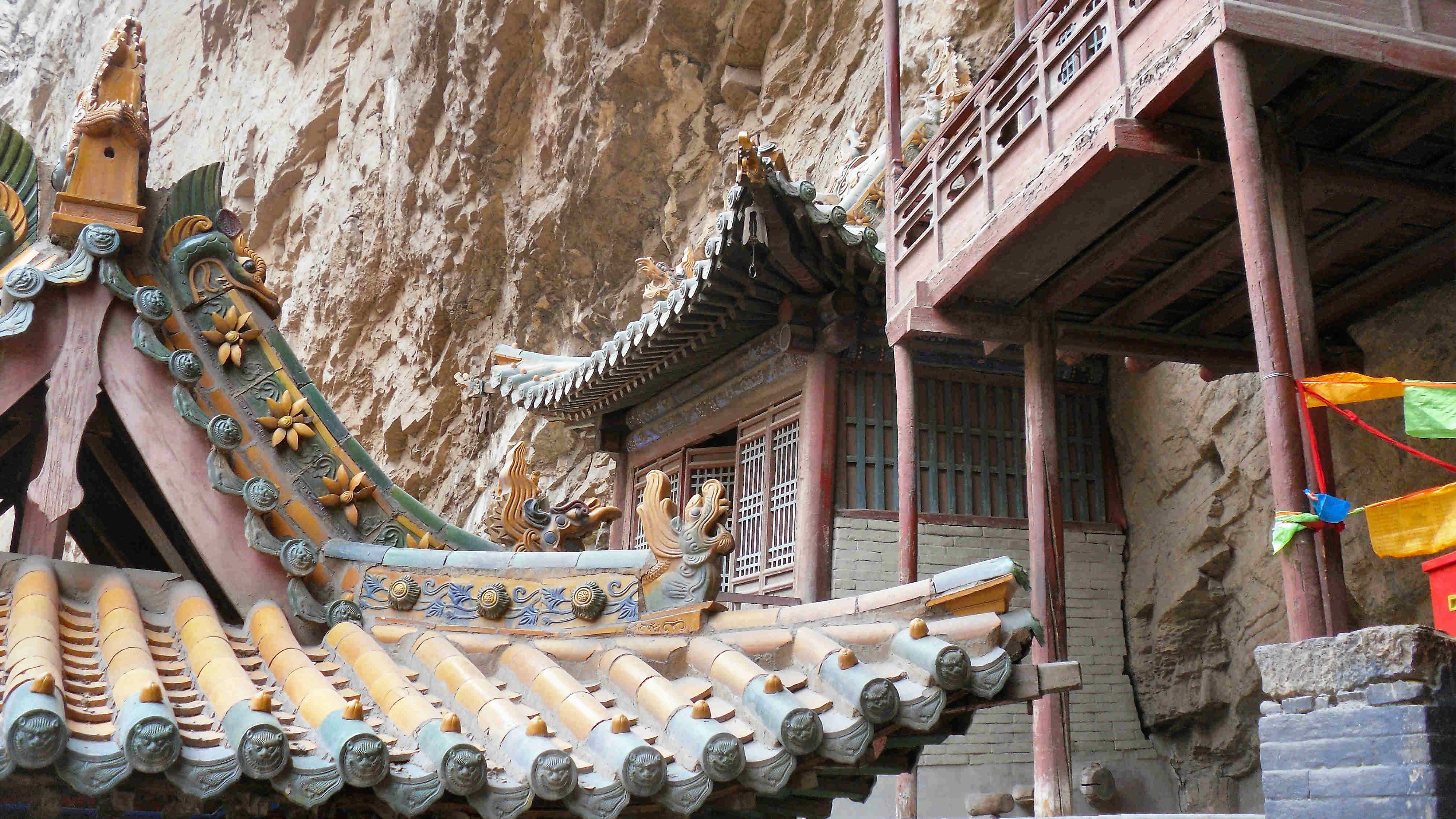 In the evening there are cheap food stalls around the busy square, or you can try the new shopping area of Gu Cheng. This is a quiet place to wander and find a restaurant to eat in. Again the building style is intended to recall the city’s ancient past with dark wooden shopfronts and streetlights clutched by bronze coloured statues. But this time the architecture is a more modern interpretation than a replication. Perhaps the consequence of having to perform a useful function instead of just being theatre props.

I returned home the following day. For a first trip, a weekend was enough. I’d escaped the modern city in search of images of the past. I thought the monastery and the grottoes embodied some authentic essence. But looking back, the recreation of the capital from the ruins of its past is equally characteristic. The rise and fall of cities and of the dynasties that build them, are also Chinas long story. My journey to Datong had been dwarfed by the vastness of the land. Equally, my time there was nothing against the city’s slow cycle of change, being reborn once more under the unbroken gaze of the Yungong Buddha.