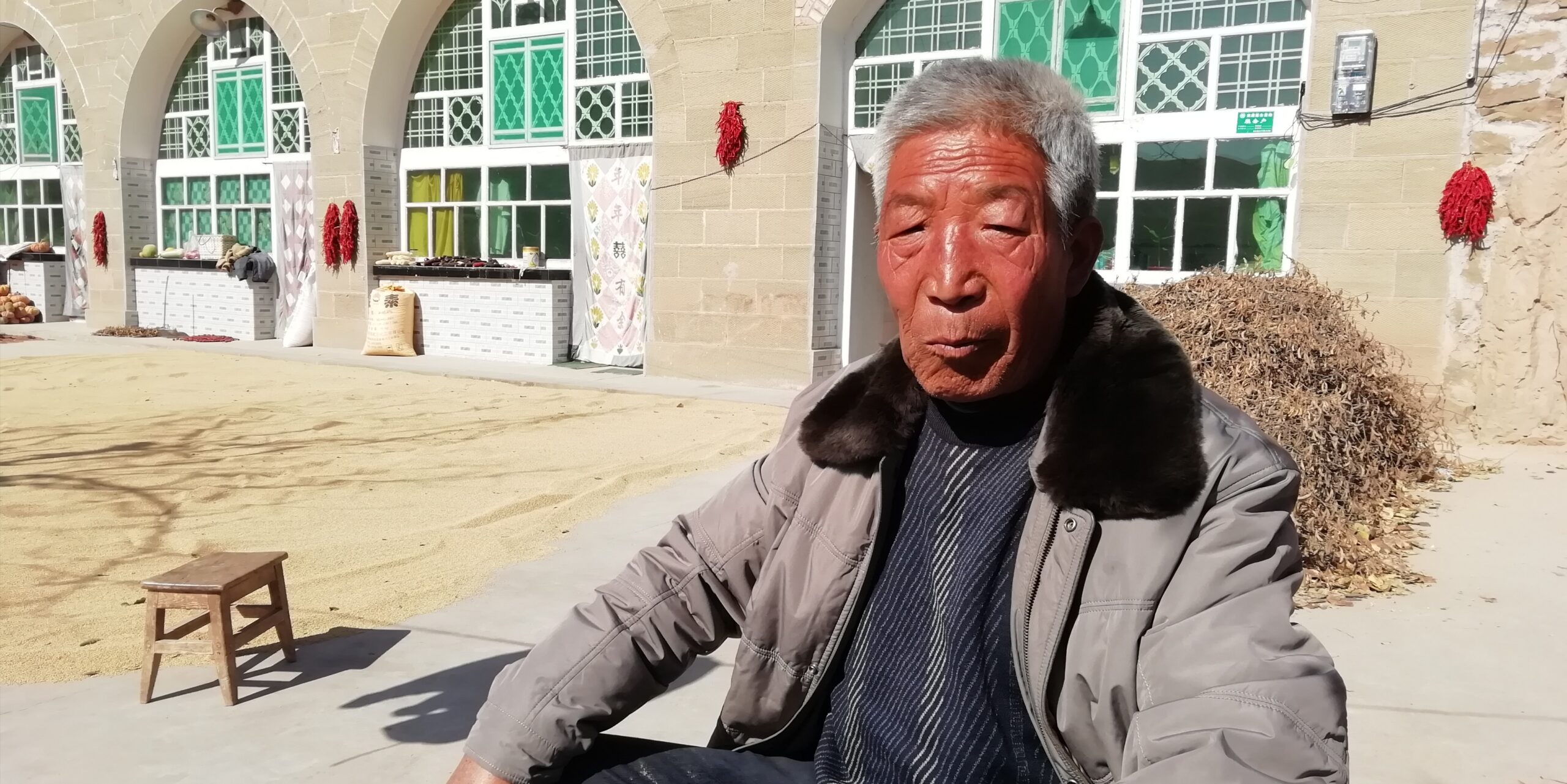 Flying into Yulin airport the landscape below stretches out flat and empty. Dull vegetation covers the ground in dark patches, but they’re so thinly spread that the creamy yellow soil shows through like the scalp on a balding crown. The first impression of the northern counties of Shanxi is a barren, arid land.

On the ground though, as we drive away from the airport, the land is far from flat nor is it unproductive. Ridges of hills rise into domed peaks whose sides, gouged and gullied by rain, have been stepped into narrow terraced fields of Maize, Sorghum and the occasional fruit tree. The land, which on first glance had looked peppered only with a struggling scrub, has been worked into fertile farms. Crops now past their harvest have turned to the browns and ochres of autumn, fading into the colours of the earth they grew from. 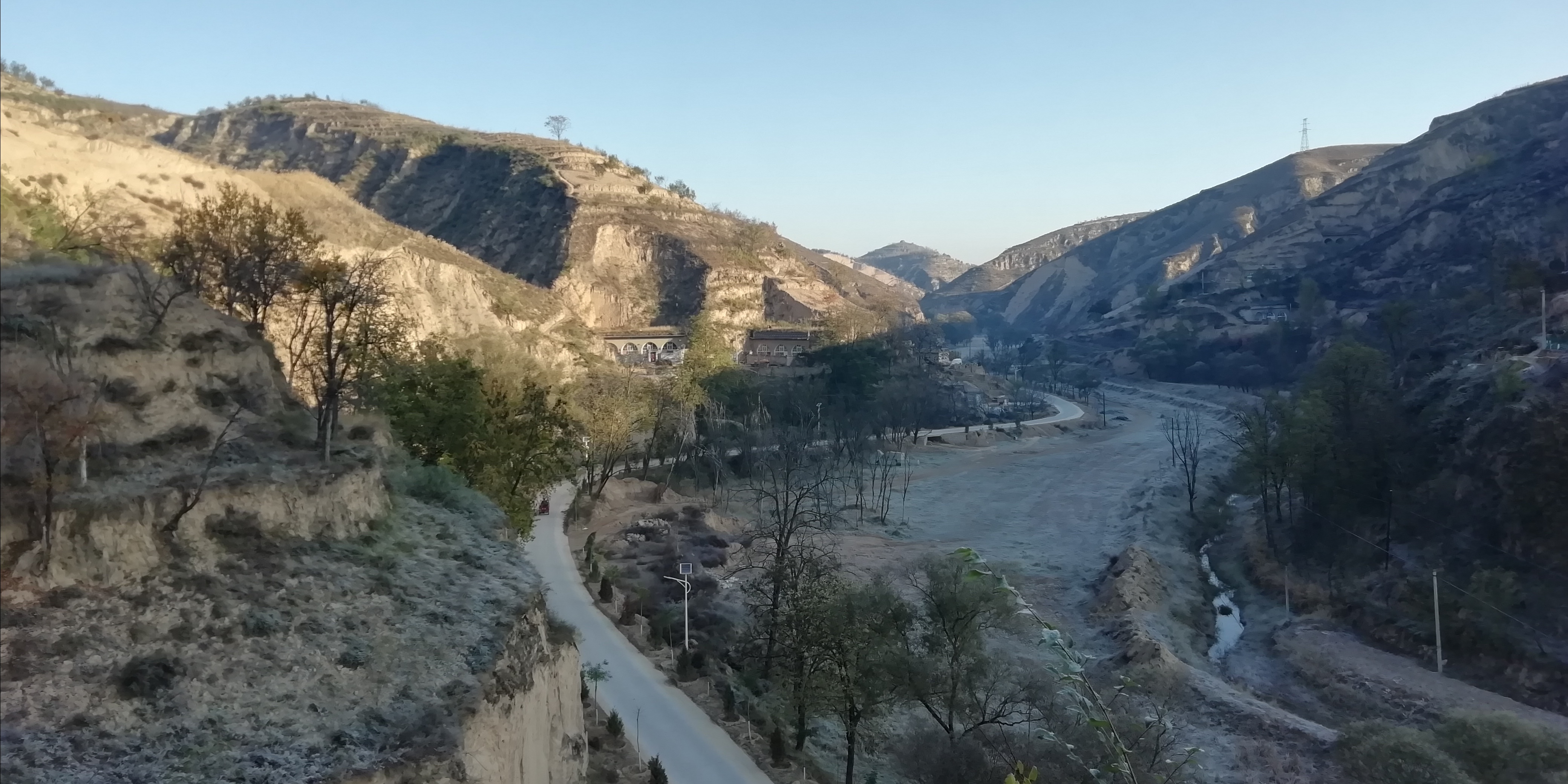 The highway follows the meanders of a wide stony river bed where a narrow stream slowly trickles along its centre. Convoys of trucks leak coal dust from their loads like pepper pots as they bump over the ruts and pot holes of the roads.

The region is famous for coal and for its ‘Yaodongs’. Cave dwellings dug out of the hillside’s soft mud. From the road, the arched entrances to the caves are common, scattered about the south facing slopes or sometimes grouped in short terraced lines. Some are little more than gaping dark holes, but most show signs of occupancy. 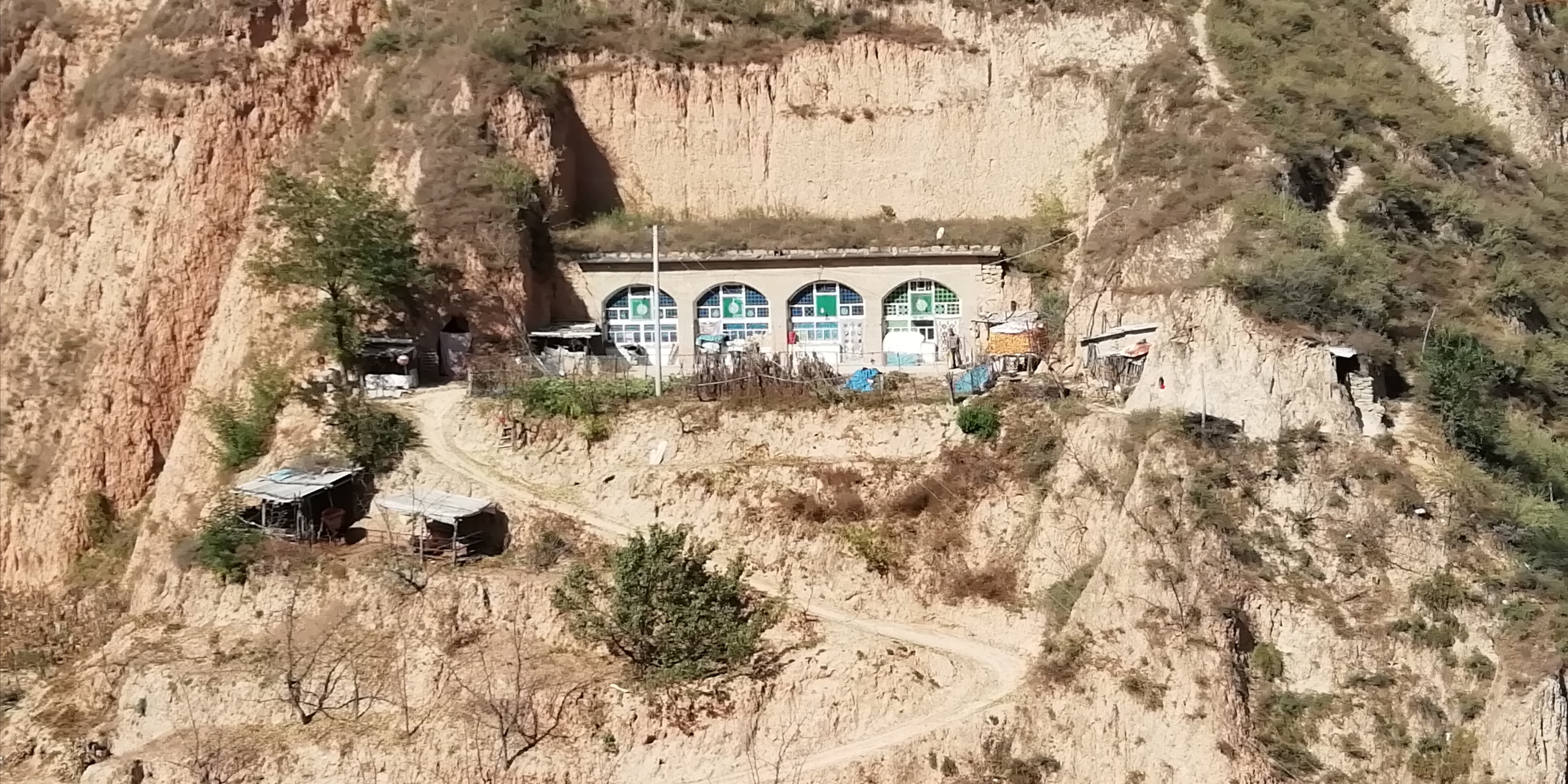 Ms Ma who grew up in one of these caves is driving me to two caves made famous by their past occupants. The first is in Yan’an where Mao Zedong ended the long march and began the revolution that gave birth to modern China and the second is in Liang Jia He where the current president, Xi Jinping lived when sent to work and learn from the peasants in the 1970s.

The Yaodong where Mao Zedong and his revolutionaries quartered are located outside the non-descript city, tucked in a quiet valley surrounded by wooded hillsides. In the autumn sunshine, the group of buildings that were the assembly hall, workshops and homes of the Red Army is extraordinarily peaceful. Grainy black and white photographs from those radical times line the walls inside the buildings but the hardship and danger they would have endured is incongruous in to-days pleasant serenity. 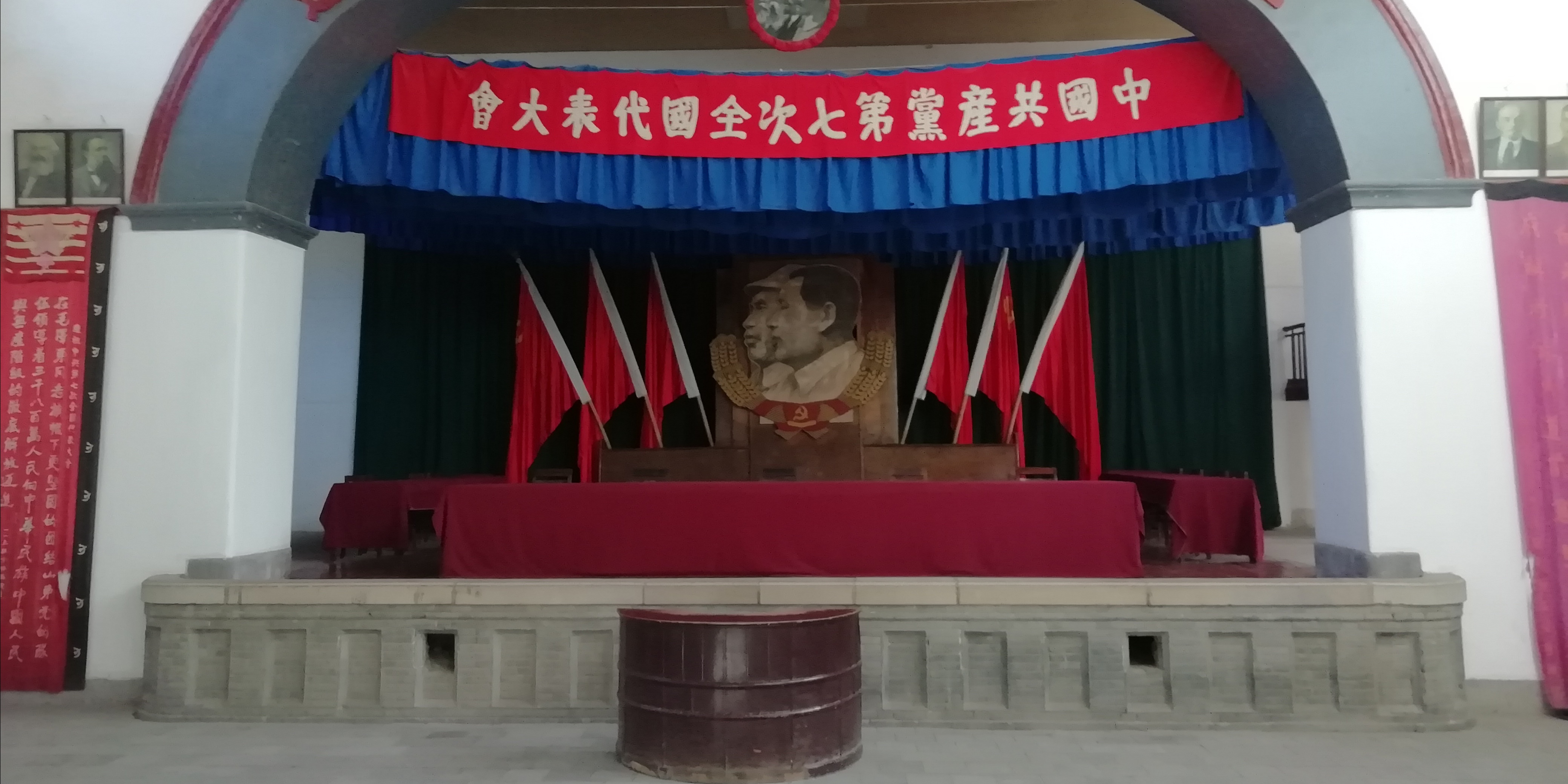 The cradle of the revolution, as it’s known, is a hugely popular site for those interested in what is called red tourism and small groups sit listening to what I imagine are heroic tales and Mao Zedong thought. 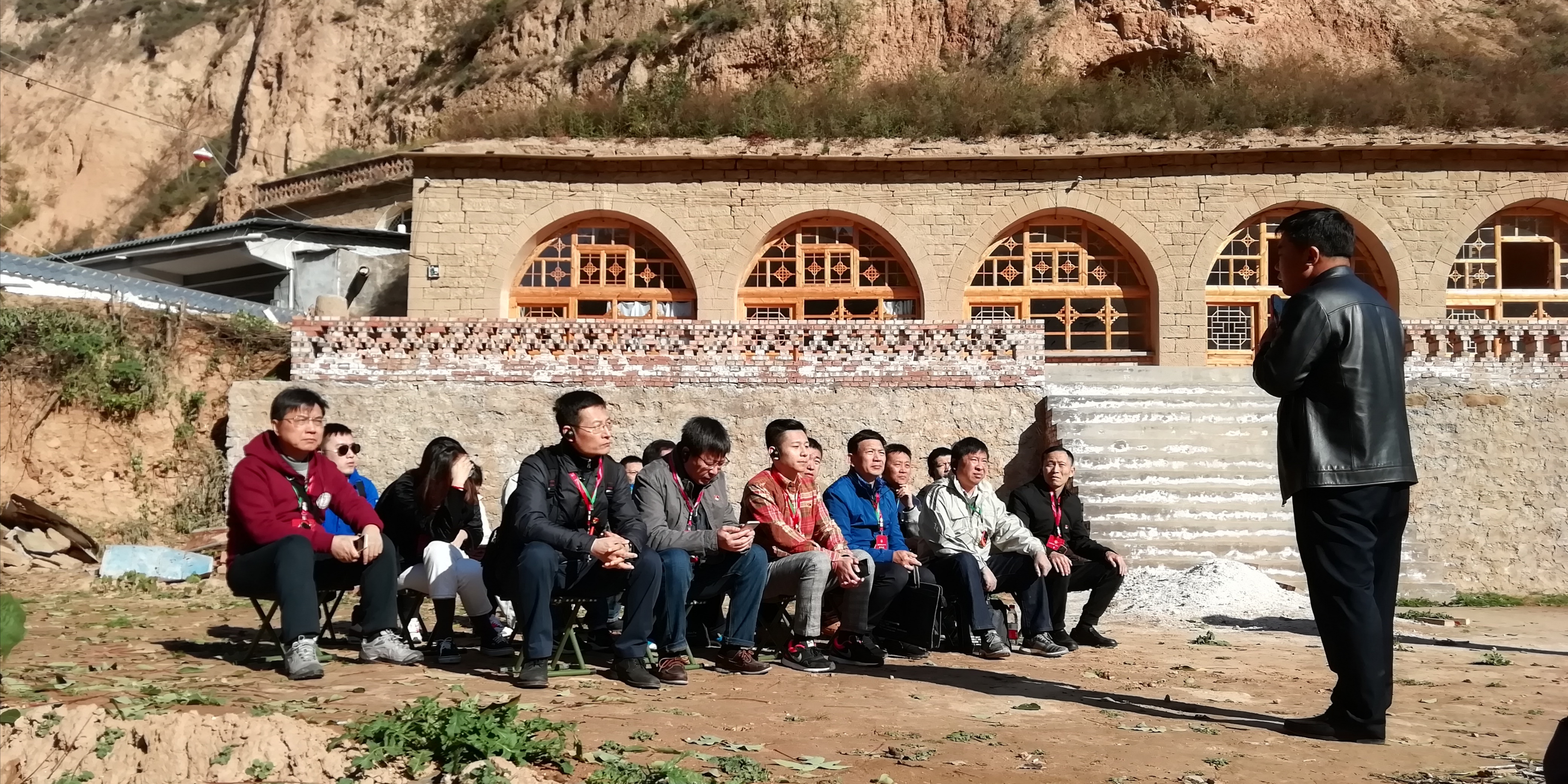 It’s the end of the season and there are so few people here that it’s possible to be alone in his former house and take uninterrupted selfies at a dais in front of the stage adorned with party flags and symbols. 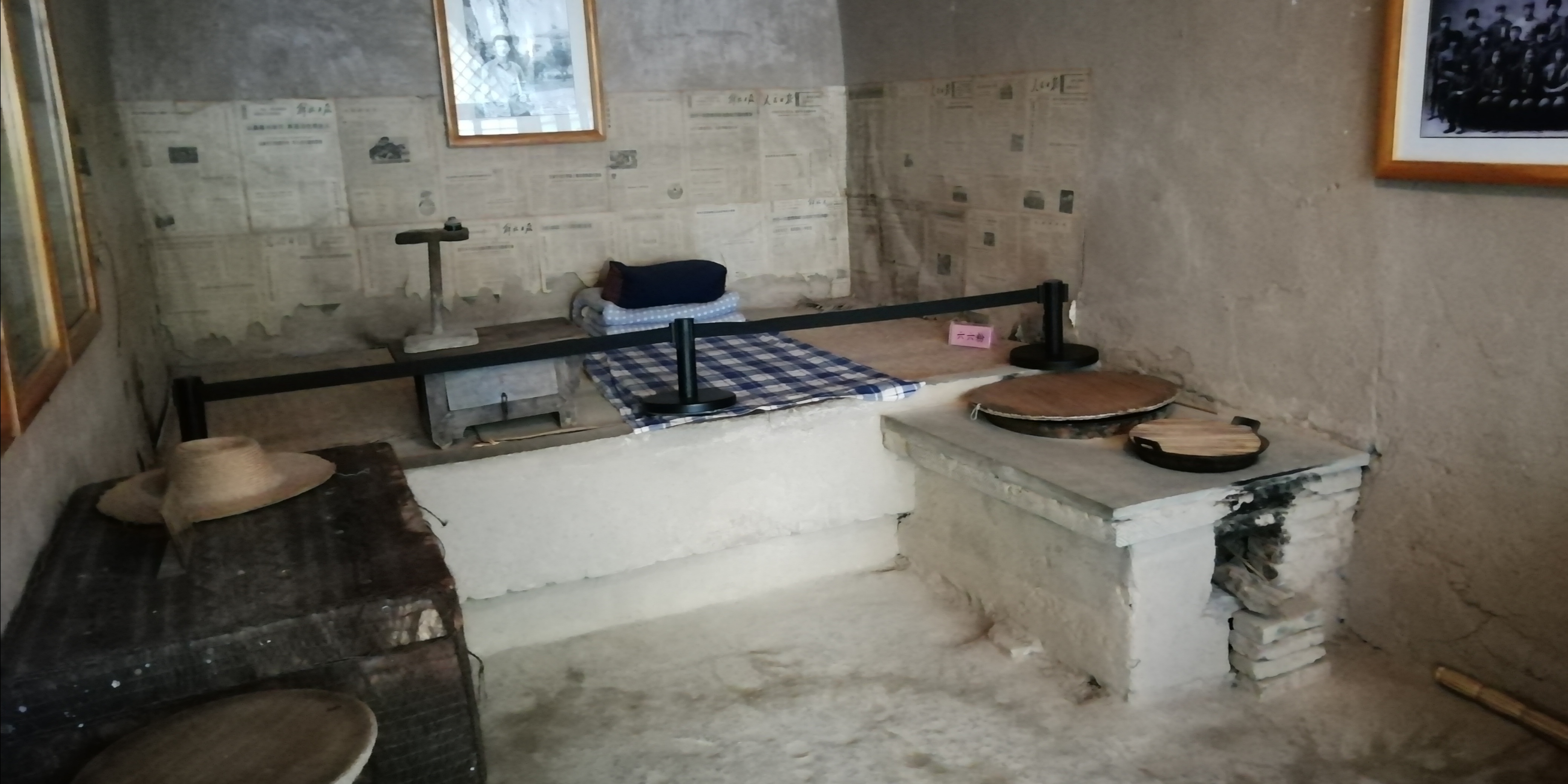 The Yaodong where Xi Jinping lived is similar and simply furnished. This time it’s at the end of a long drive, deep into the country. Here the emphasis is more on the humble and rustic village life he would have experienced. There’s a picturesque hay rick, a blindfolded donkey shackled to a millstone and kernels of sweet corn drying in the sun. It’s very smart and tidy; not a scrap of rubbish, heap of rubble or old bike part is to be seen. It’s a model of what Chinese villages could look like. 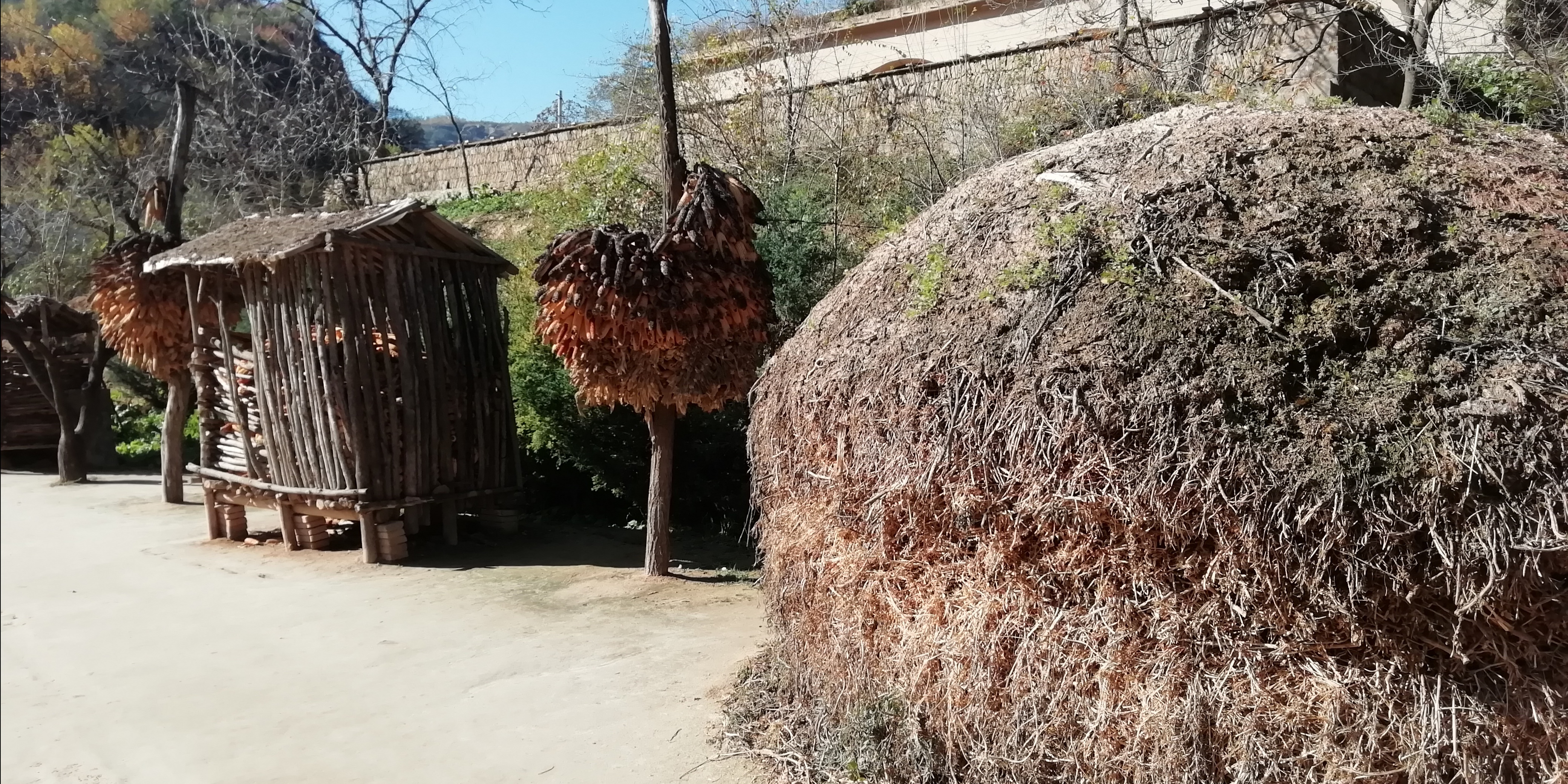 The visit to the two sites is surprisingly interesting. They don’t provide any sense of what life would have been like, but Yan’an does convey its importance and relevance to modern China, more so than the usual tourist sites do. The lack of noisy crowds and the ambient autumn sunshine help create a respectful and reverent atmosphere. 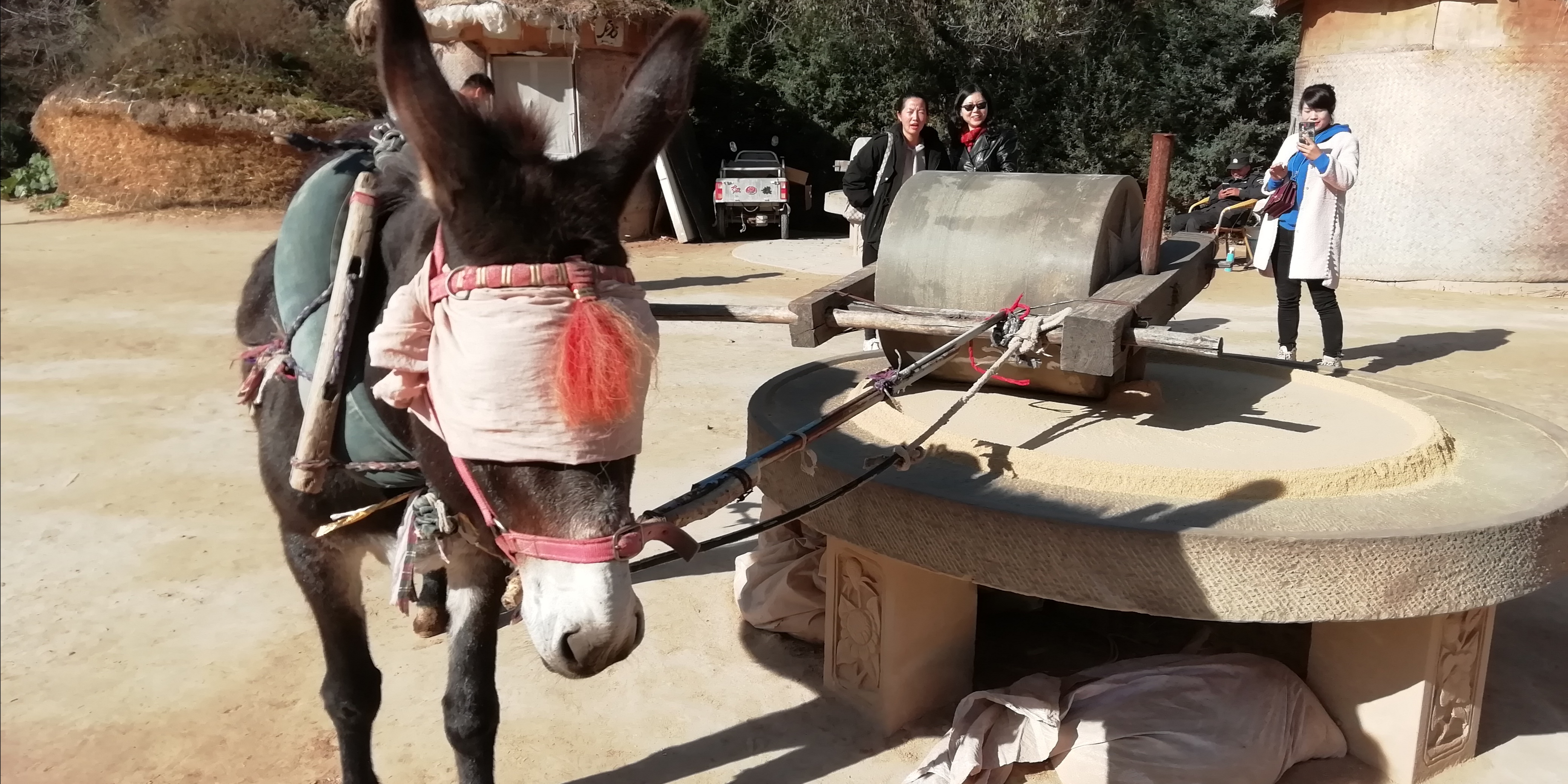 Later, as the sun is sinking, we arrive at the Yaodong where Ms Ma grew up. Her house is tucked away in a tiny village among the hills outside of Suide. Her parents still live in the four rooms that Ms Ma’s father built shortly after being married. The design is typical of those seen driving along the highway with large arched fronts angled to catch the southern sun.

Inside, the rooms burrow back into the ground, but because the entrance is nearly all glass and the walls that curve overhead washed white, its bright and airy in the evening light. A meal is being cooked on the stove and its wonderfully warm beneath the insulation of the hill that sits above. 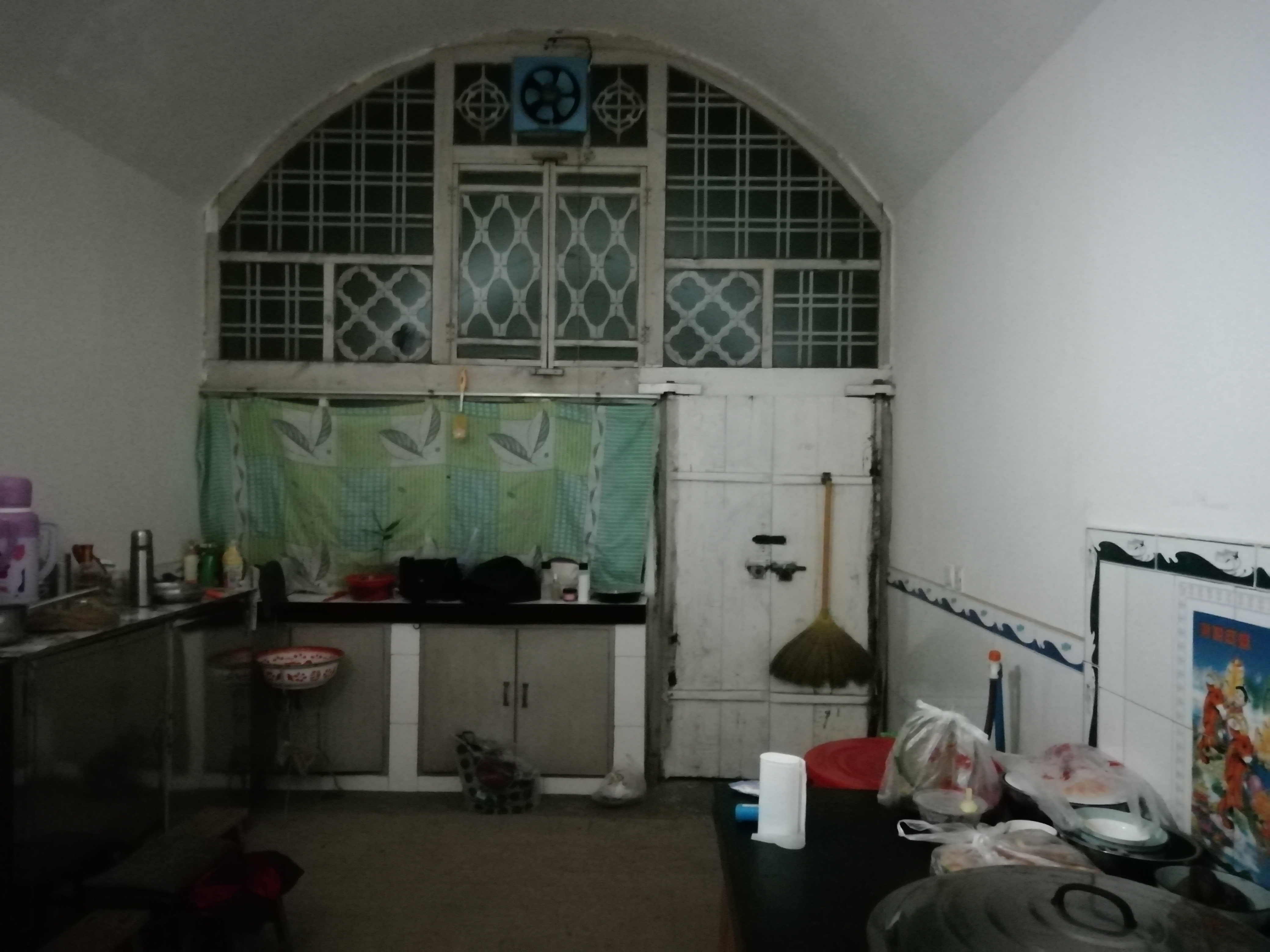 The deepest part of each room, like those in Yan’an, are occupied by a wide bed known as a kang. The exhaust from the stove, used for heating and cooking, passes under the bed warming it before venting out from the chimney above. The whole building is an ingenious solution to the extreme weathers of the region.

While there are conveniences of modern life like the large flat screen TV and the use of gas in the stove instead of wood, the daily life beginning with a cockerel and a distant bark of a dog would be familiar to the young Xi Jinping. Ms Ma’s parents are already busy when I emerge into the low dazzling sun onto the courtyard where sorghum is spread drying. 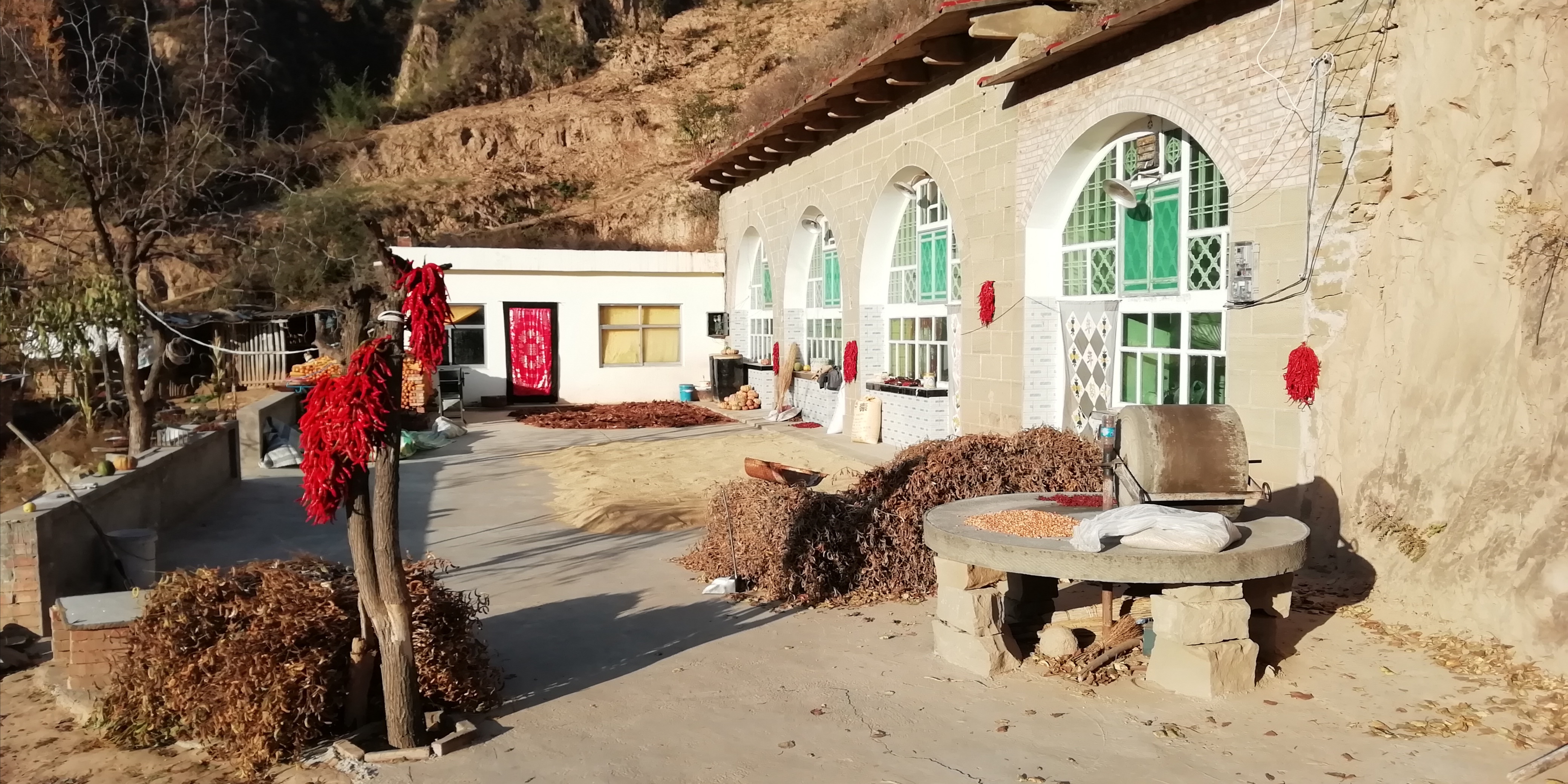 To the sides there are strings of deep red chillies hung from a tree, piles of Sichuan peppers and pumpkins, a mill stone for crushing millet. There is a number of outbuildings, one containing the outside toilet that is little more than a stone lined trench, in others scratch half a dozen chickens, a store of sticks and giant cubes of coal and a collection of gardening tools.  Above the house the ground is scraped into a series of small flat fields. Every space of soil is planted with vegetables and fruit trees. 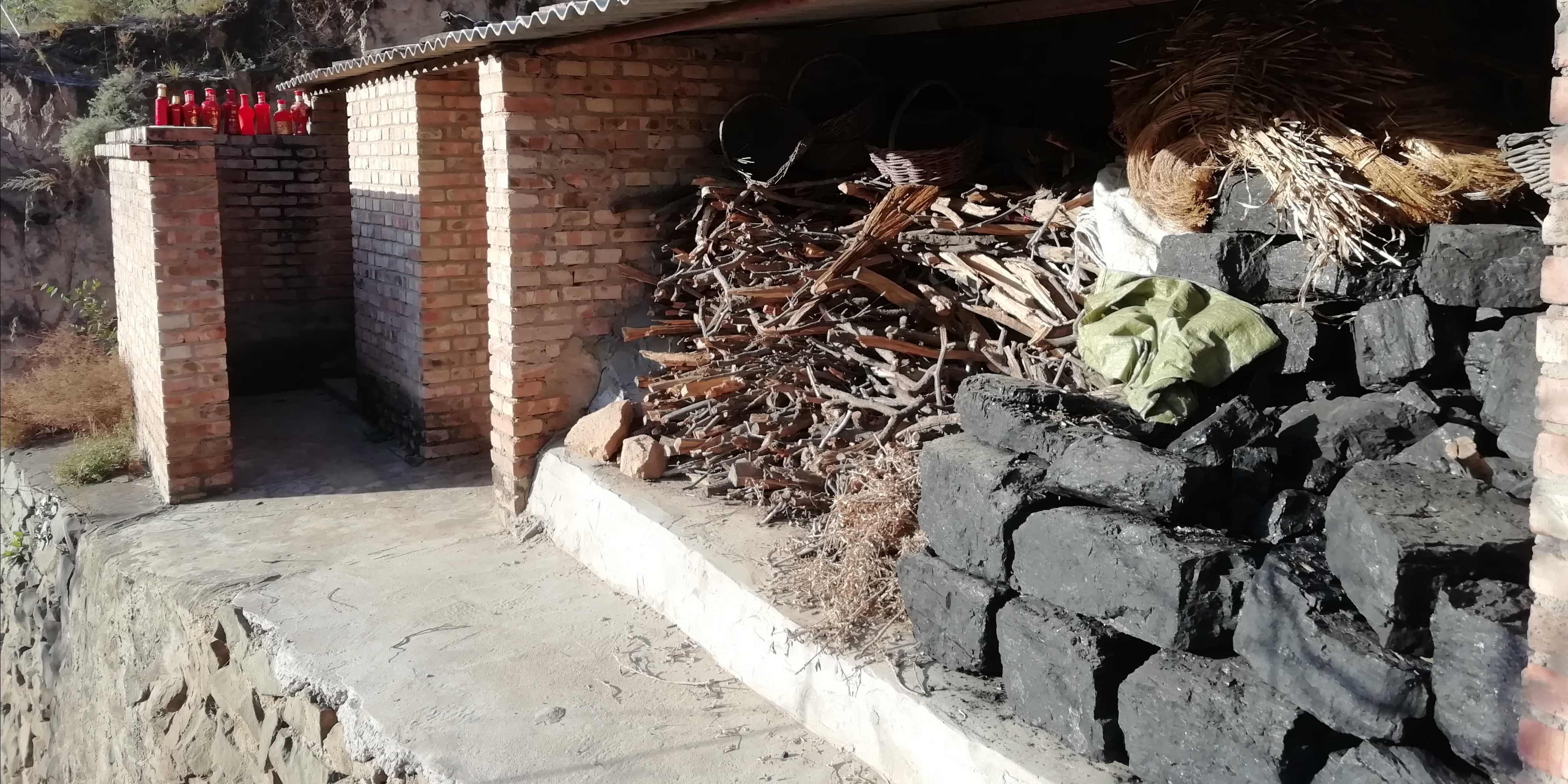 Ms Ma’s mother is makings Minjian a delicious local breakfast dish made by grating dough into boiling lamb soup.  She uses an old stove fuelled by wood while her daughter turns a fan to force air into the fire. 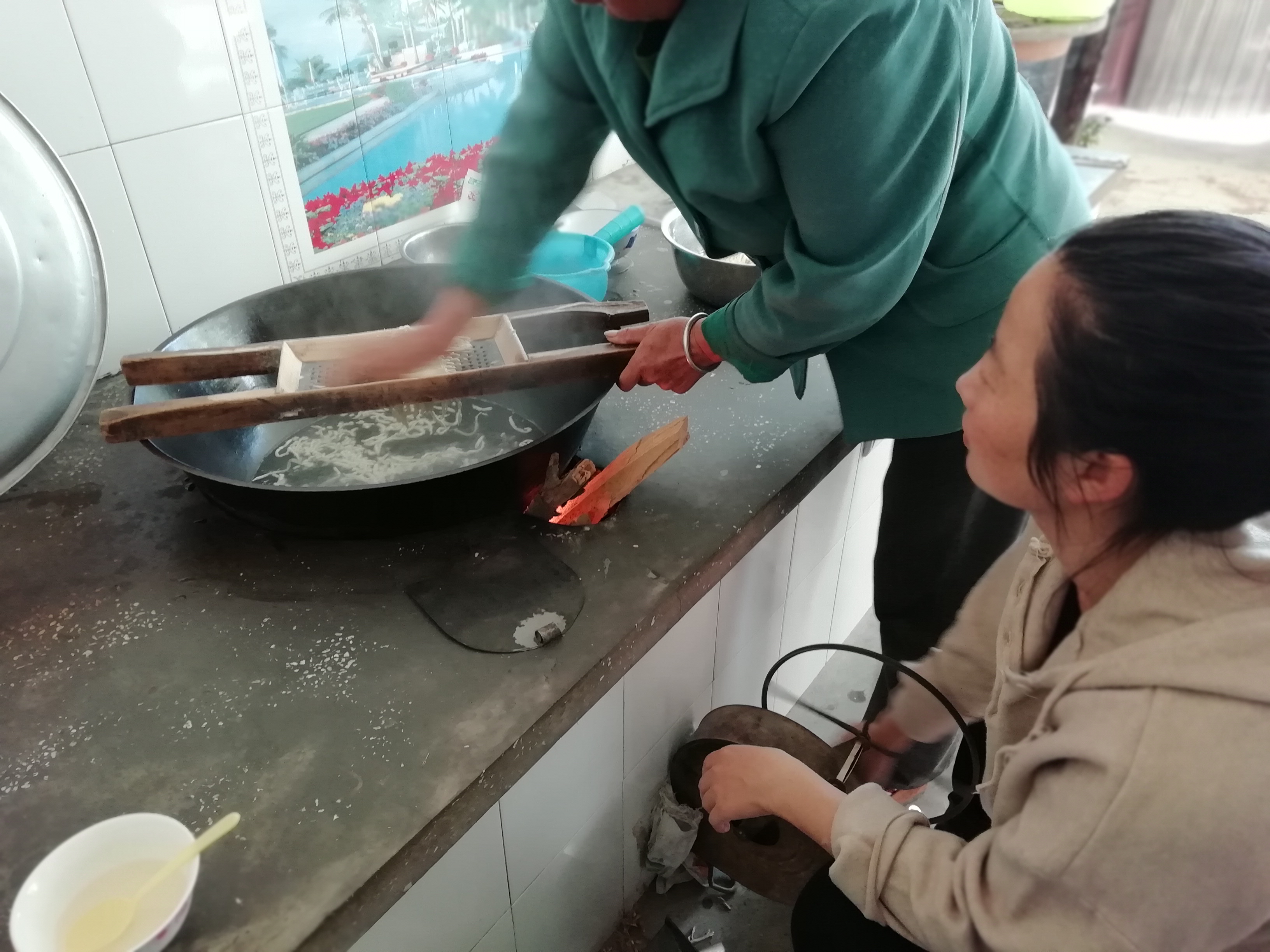 When its cooked we eat outside, squatting on our haunches and looking out along the valley below and twisting away into the tiers of amber hills that fade into the distance. 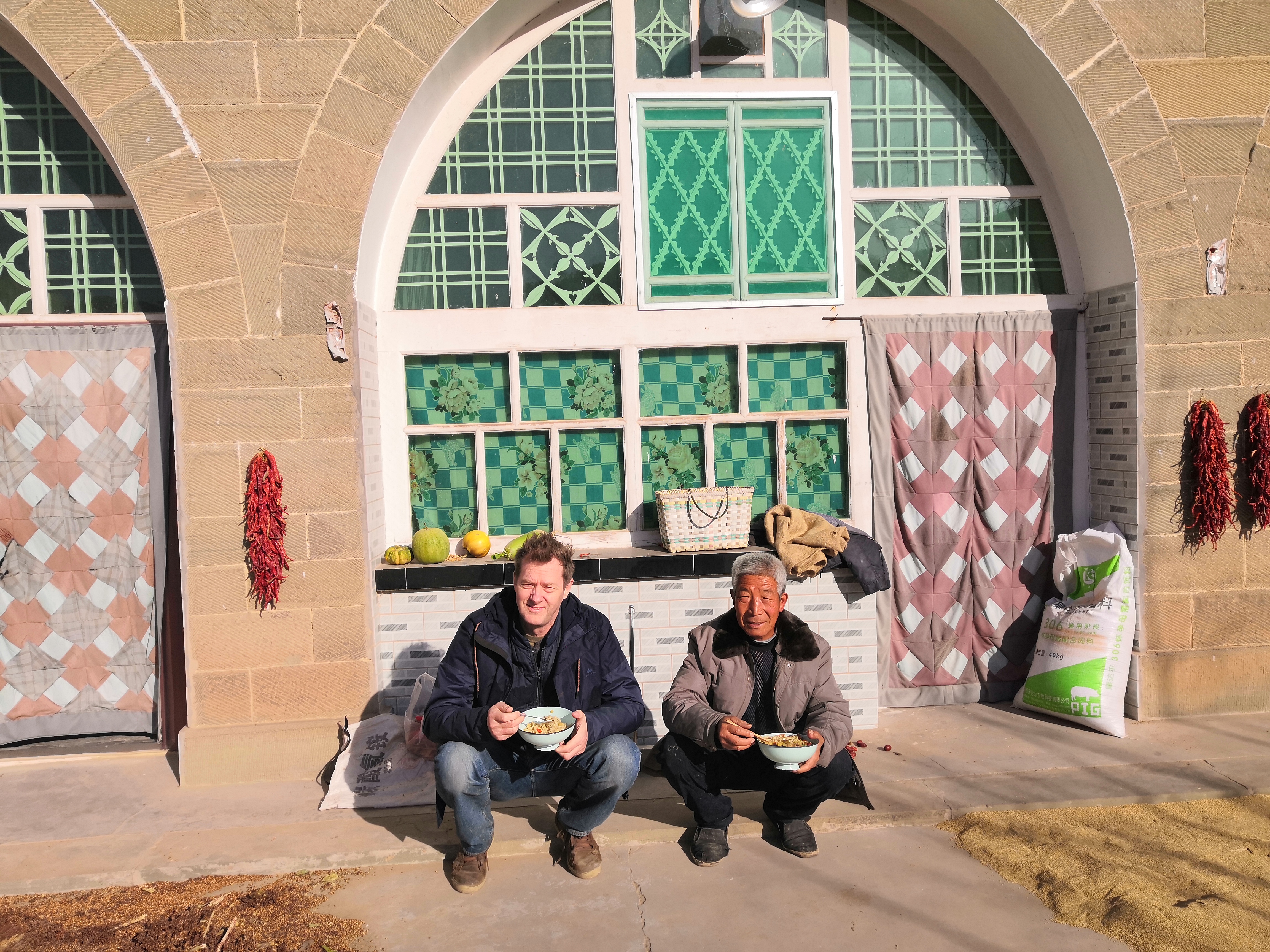 Somewhere beyond are cities of noise, pollution and technology, is a world fretting over sustainability and global warming. Here are energy efficient Yaodongs and the self-sufficient lives of their inhabitants. The idea that the simple peasant life could inform a revolution seems obvious; there are lessons here to learn