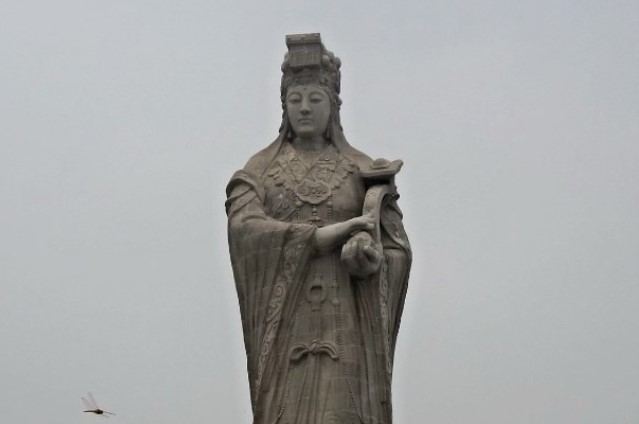 We were up early to catch the 9.25am train to Yujiapu, our small bag packed for a weekend break in Binhai.  The forecast is for bright sun and temperatures of 38 deg C, perfect for a couple of days of sun, sea and sand in the region’s rapidly developing tourist area. 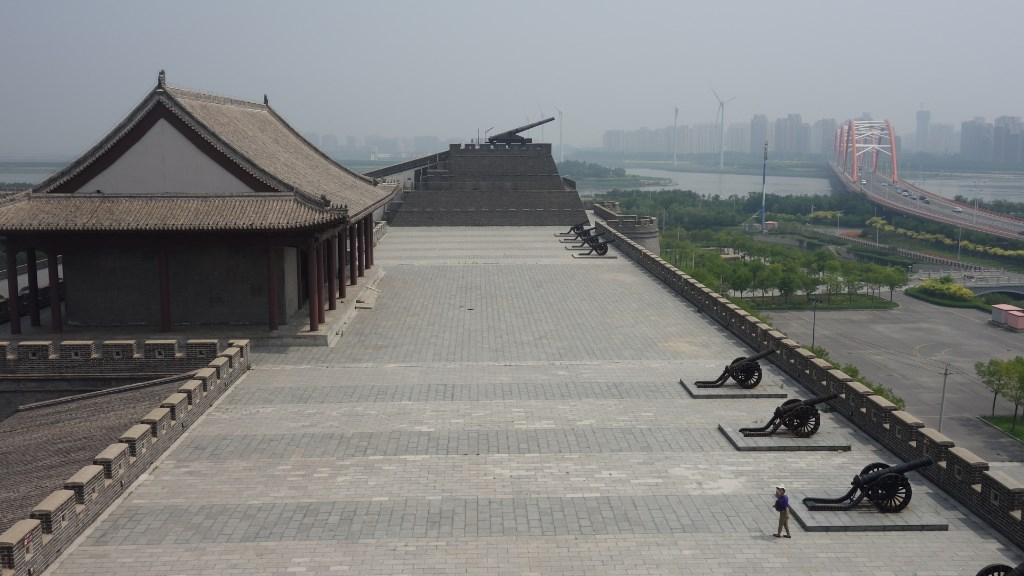 Our first stop was Bestown, where a whole antique settlement is being constructed on the location of Beitang, a once famous source for imperial seafood. The imitation Qing dynasty period buildings are dominated by a large fort overlooking the river mouth. A homage to several structures that once protected the river as a defense against pirates and later, against western aggression. 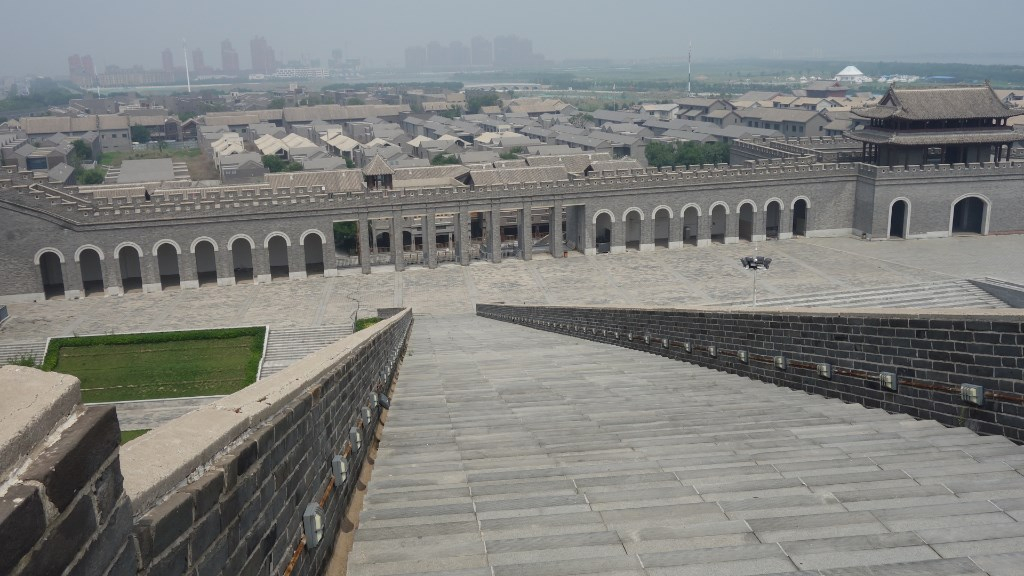 The original Taku forts, as they are known, were dismantled as part of the peace agreement following the Boxer Rebellion in 1901, not as the wall plaque states following the opium wars. The double walled fortress has large guns that point out over Eco city. On the opposite side, it overlooks the town’s narrow streets and tiled roofs. It makes an attractive scene, used as the setting for several Chinese TV dramas.

We first visited Bestown 4 years ago. Then, the fort was not open and the town was still being constructed. Today, the fort is more complete, but the shops, restaurants and housing are still a work in progress. In fact the restaurant and bar it once had is now closed, construction of houses has halted and the moat water is green and stagnant. Some parts are already falling apart, the old brick veneer falling away in sheets to reveal the modern construction beneath. From the ramparts and battlements, the views of the sea gives a good impression of the strategic importance of the area, but the lack of attention to detail, the modern architectural flourishes and build quality betray it’s lack of authenticity. The few visitors a rare sign of planning failure. 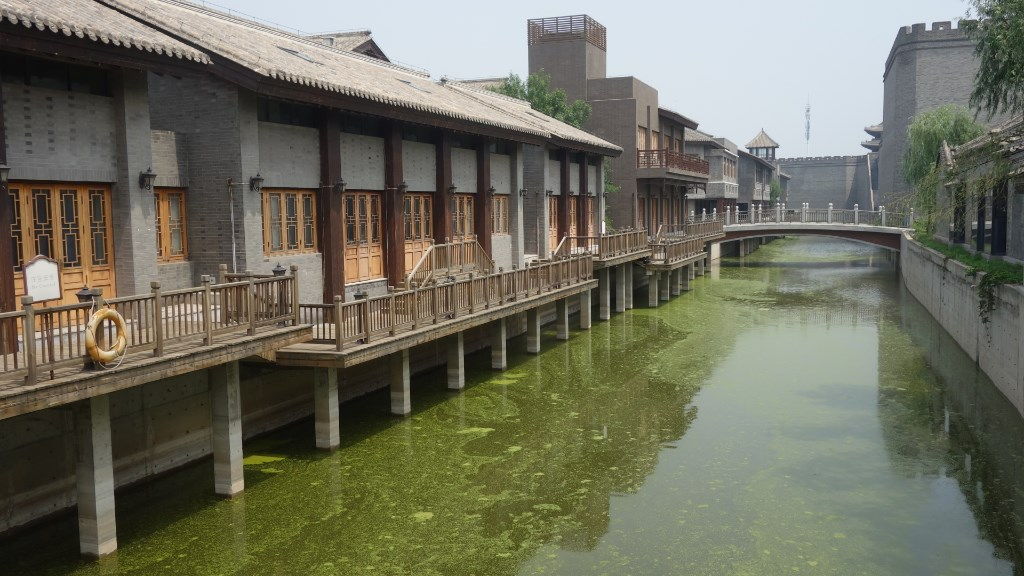 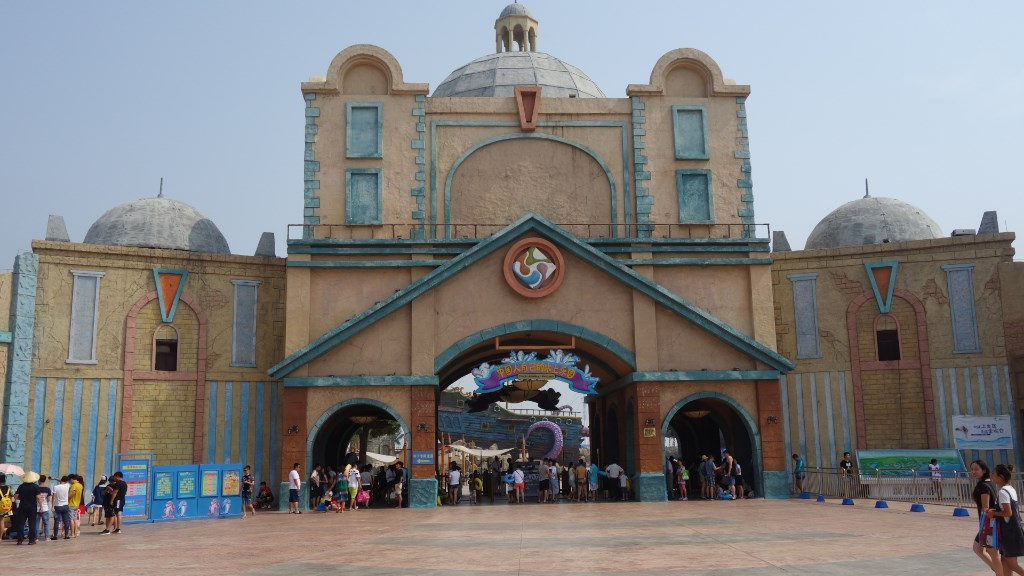 We had planned for a light lunch at Bestown, but there was nowhere open to eat. So, as the sun and temperatures climbed we sped off to Aqua Magic, the water theme park further along the coast. The water park makes a great first impression; a pirate ship being broken in two by a giant octopus. This is maintained by its cleanliness and a design of park that while being quite large, nowhere is far to walk. The largest feature is the beach, a wide sandy strip that slopes into an enormous pool. The water gradually declines to a depth of 1.9 meters. It’s a clean, safe alternative to bathing in the Bohai Sea. 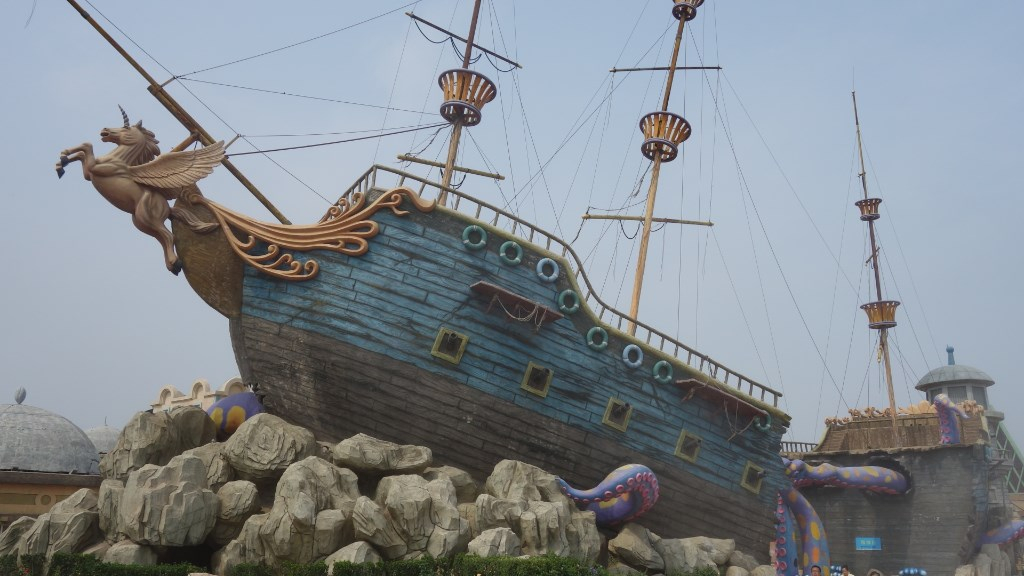 A highlight is mid-afternoon, when there is an energetic performance of dancers set to thumping music on a stage suspended over the deep end. Periodically, impressively large waves are unleashed when they smash into you, filled with the swept aside debris of bodies and inflatables, it’s pretty scary. Great fun if a little dangerous. In the shallower water, the waves break more gently and there is plenty of room for surprised toddlers to be softly knocked down or to jump over the little crests. 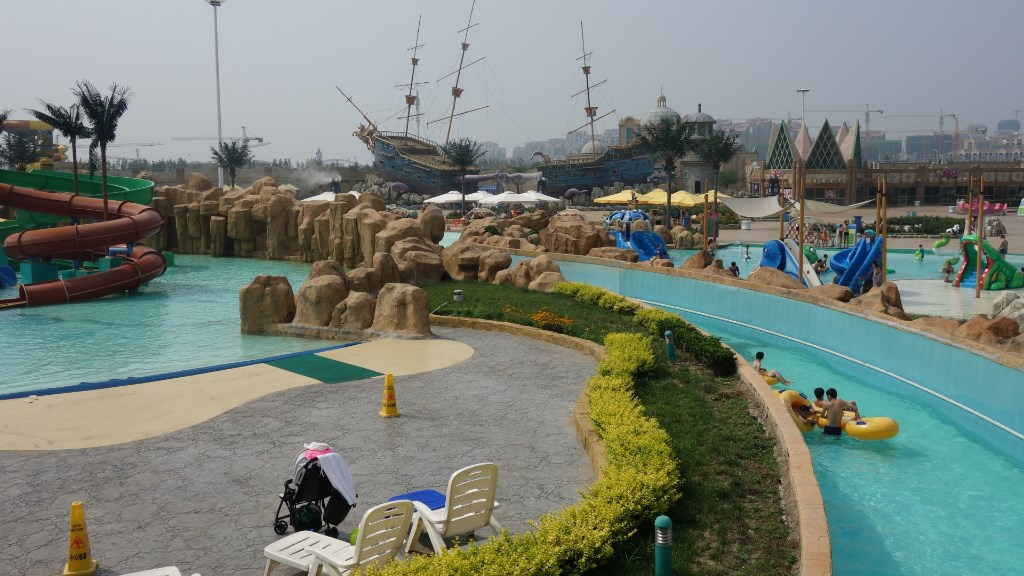 The queues to some of the popular flumes are quite long and slow moving. Unless you do these early, when the crowds are smaller, you might feel the brief minute of exhilaration is not worth the wait. There are however, plenty of other watery ways to keep cool. My favorite was the surfing, where you get the chance to balance on a board over a fast-moving stream of water. Exhilarating to do, but also highly entertaining to watch other people fall off and get swept ungraciously away into the padded walls. 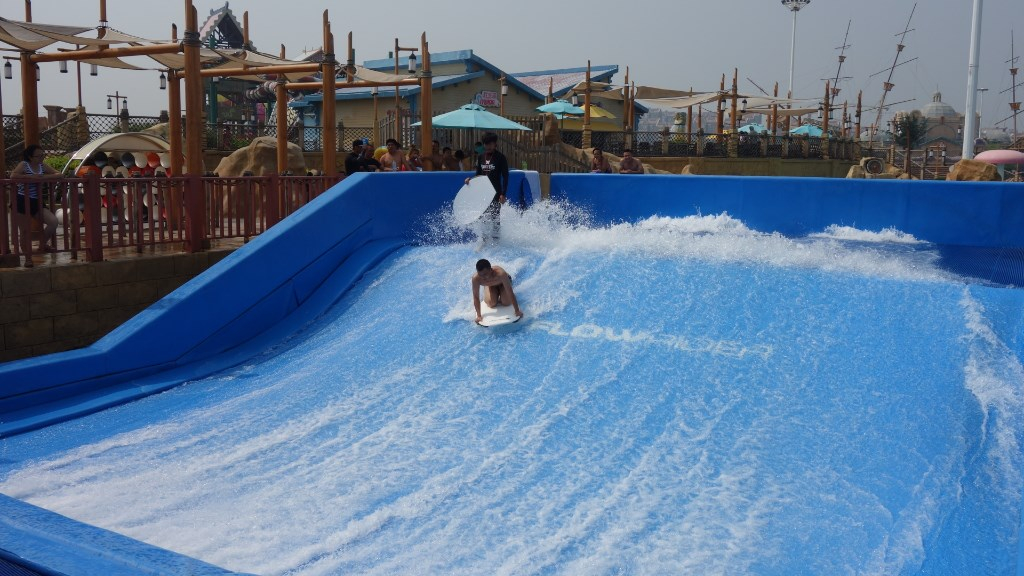 After the show, we shot off to Fantawild Adventure park. If you enter after 4pm the tickets are half price. If you have been to Disneyland, the layout of a main street of shops and several zones leading off with themed rides under a fairytale castle will feel familiar. 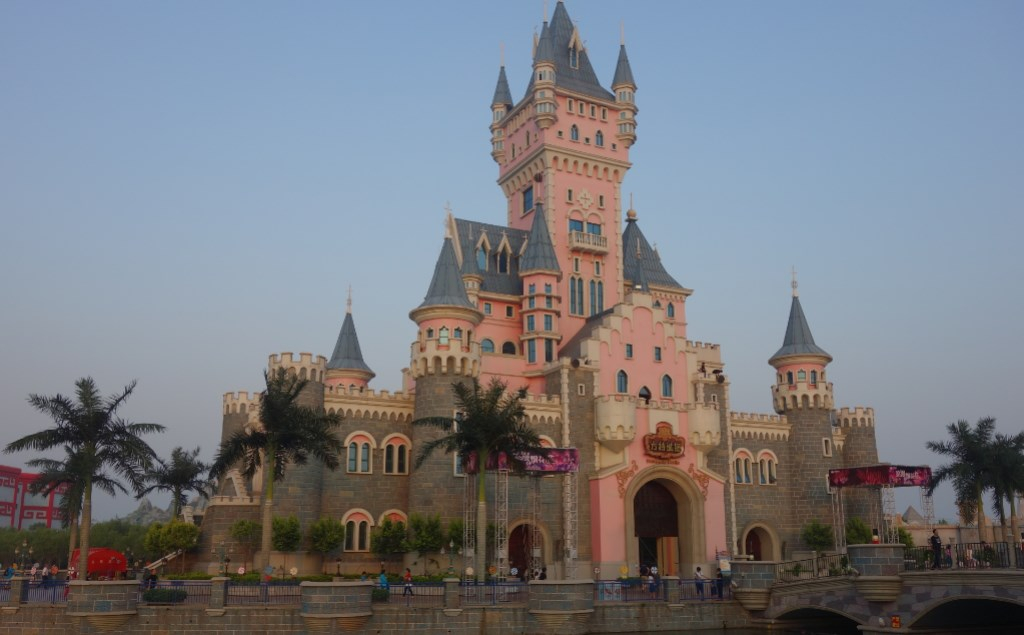 Fantawild Adventure park has several rollercoasters that provide a varying degree of stomach churning scariness. What differentiates it from other parks is its heavy use of 3D imaging. There are several indoor features and their air-conditioned darkness is a very welcome break from the heat and screaming of the thrill-seekers outside. I particularly liked the story of Nezha Nao Hai, based on a local legend of a boy who goes under the sea to kill the dragon king. As well as being educational, it had us ducking sharks and arrows as our seats rose and weaved over beautiful sunken cities. The themes in the park are nearly all from Chinese culture, such as ‘journey to the west’ and ‘Boonie Bears’, but there is also a very popular Harry Potter like attraction too. 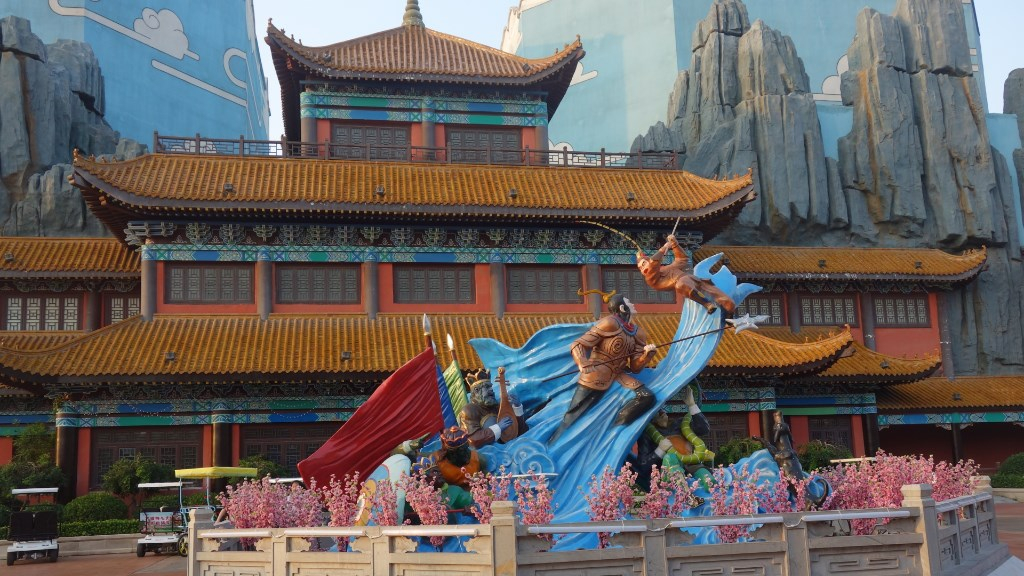 As darkness descends there is a reasonable, live, boy band followed by a series of dance shows by scantily dressed women in the main street. It would be judged unsuitable for the young audience in the UK but the concerns of censorship work differently in China. The night ends around 8pm. 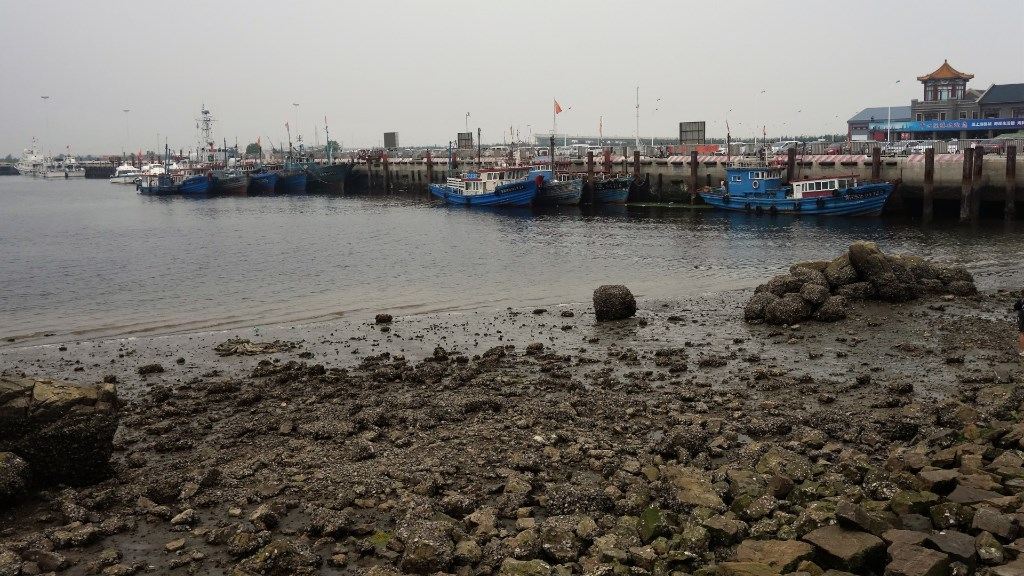 Sunday morning was another hot sunny day. We had booked a return train at 3pm so only had half a day to explore the rest of the vast tourist area. We had been to the most popular attraction – Binhai Aircraft Carrier Theme park before, so was keen to see the new beach at Rolling Waves. We had heard it had been created from sand imported from Hainan.  The taxi dropped us off at the entrance to the quiet marina. Several blue fishing boats were tied up to the quay side and people had climbed over the fence and were wading in the muddy banks collecting oysters.

The rolling waves beach is around the corner, part of a new development which hasn’t progressed beyond a model and artist’s impressions of the future. The beach too wasn’t finished with just a small square of sand open and no access to the distant sea. The beach at Dong Jiang is infinitely better, this is just to show potential buyers of the future apartment blocks what it will look like. 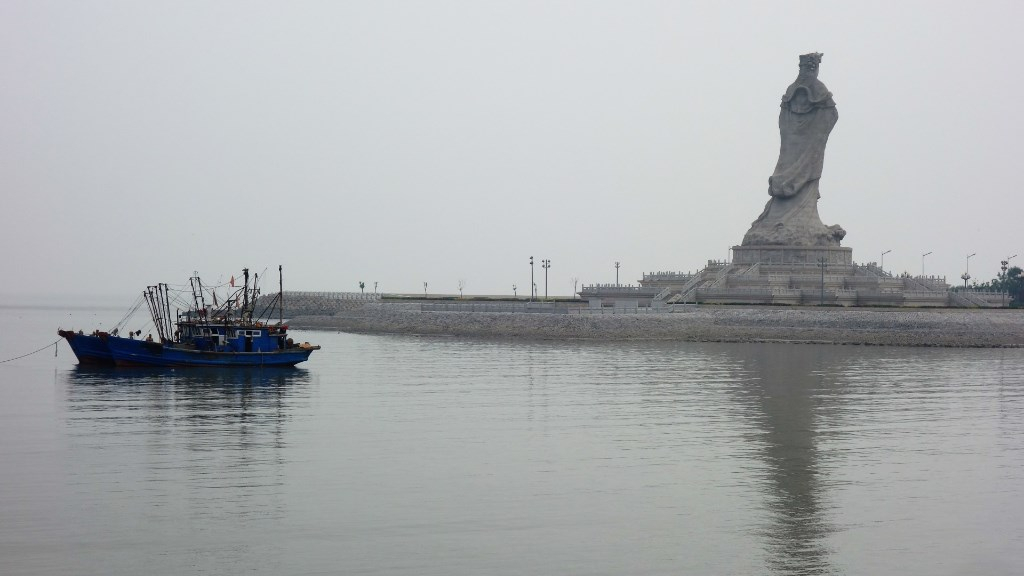 Disappointed, we went on to the Giant statue of Mazu the Buddhist goddess of fishermen. The statue stands at the end of a very long causeway, dotted with fishermen. There is nothing there, except the statue, but it is impressive and on a day where the haze blurred the margin between sea and sky, quite ethereal. On the way back someone had locked the gates and we had to wait for a fisherman to arrive with a key to get out. 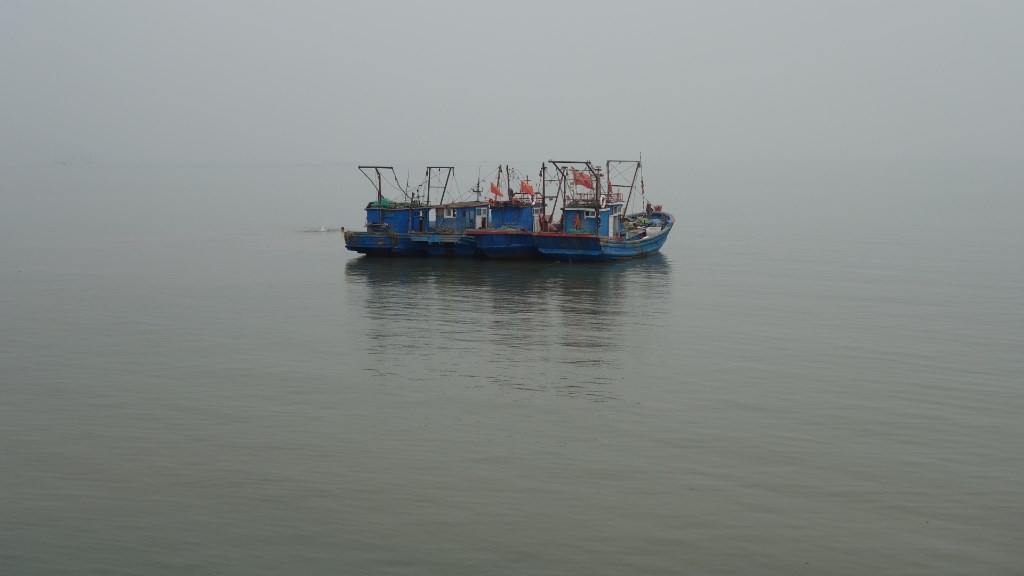 The tourist area is far from the city and far from finished. The scale of the development planned is typically ambitious, but this time there are signs that the money is running out and it won’t be completed. What is already there is in danger of declining into gradual disuse. The same fate as the Nine Dragons theme park.