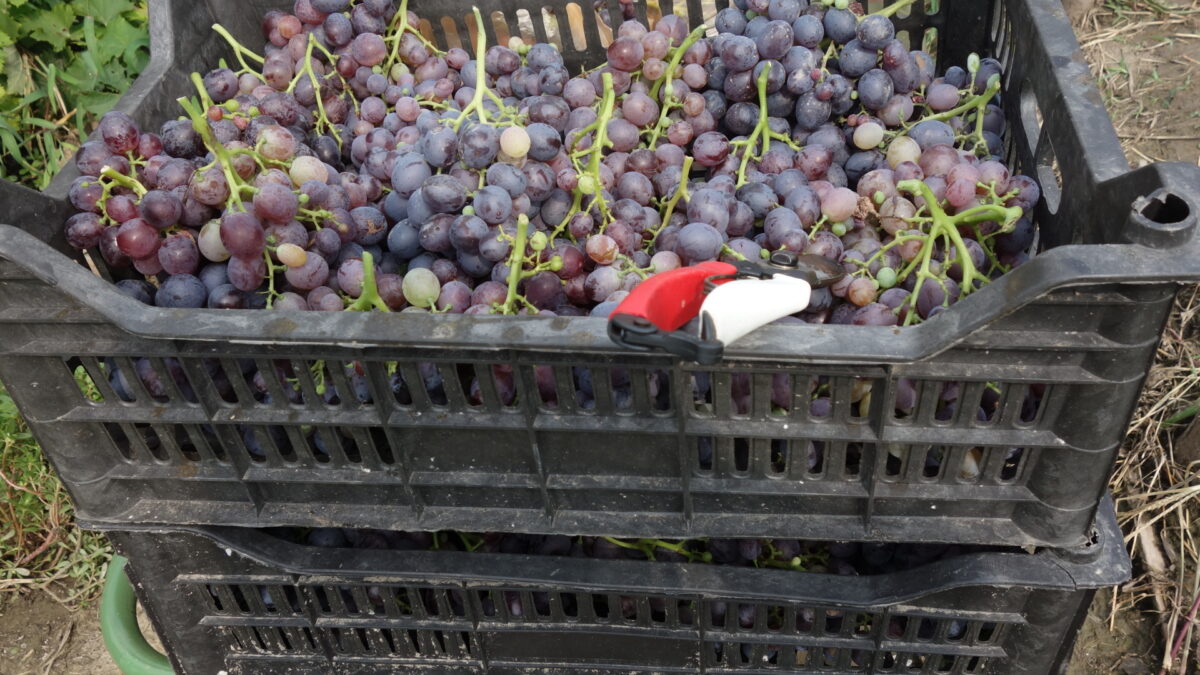 A friend of a friend has invited me out to his vineyard to help pick grapes. The weather is still hot and dry and I pack the sun cream and a hat for protection against a day toiling in the sun and he brings a case of water. He has been renting a plot of land just outside Tianjin where the grapevines are already mature. It’s his first years yield and a day’s work I’ve romanticized about for some time.

Grape picking conjures images of toiling in the rustic landscapes of an impressionist artwork, but being China I’m also excited about following in the footsteps of the Zhiqing ( Chinese: 知識青年上山下鄉), the young people who until the end of the Cultural Revolution, left the urban districts to live and work in rural areas. It was part of the “Up to the Mountains and Down to the Countryside Movement” aimed at re-educating young intellectuals by the peasants, through hard manual labor. The propaganda posters of the times, show rosy cheeked peasants working cheerily in the sun.  A view of the simple rural life that appeals after a month cooped up in the office. 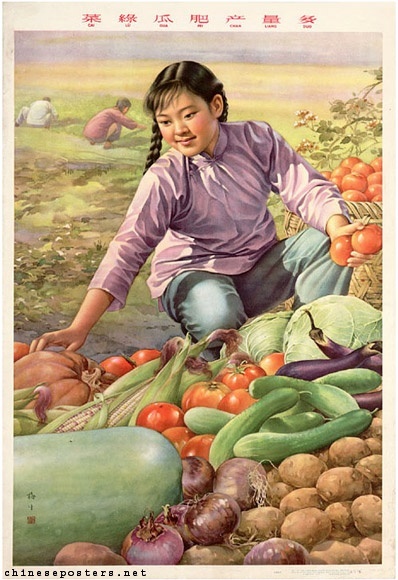 Mr Dong is the second person I’ve met who works in the city and rents some farmland in what is a growing trend. A colleague has told me about her driving out to her plot at the weekends – if the pollution isn’t too bad. I imagine she does a little work and picks some vegetables to take home. During the rest of the time the owner tends the crops on her behalf. Her main motivation is to have food that she knows hasn’t been sprayed by chemicals, pesticides and fertilizers. 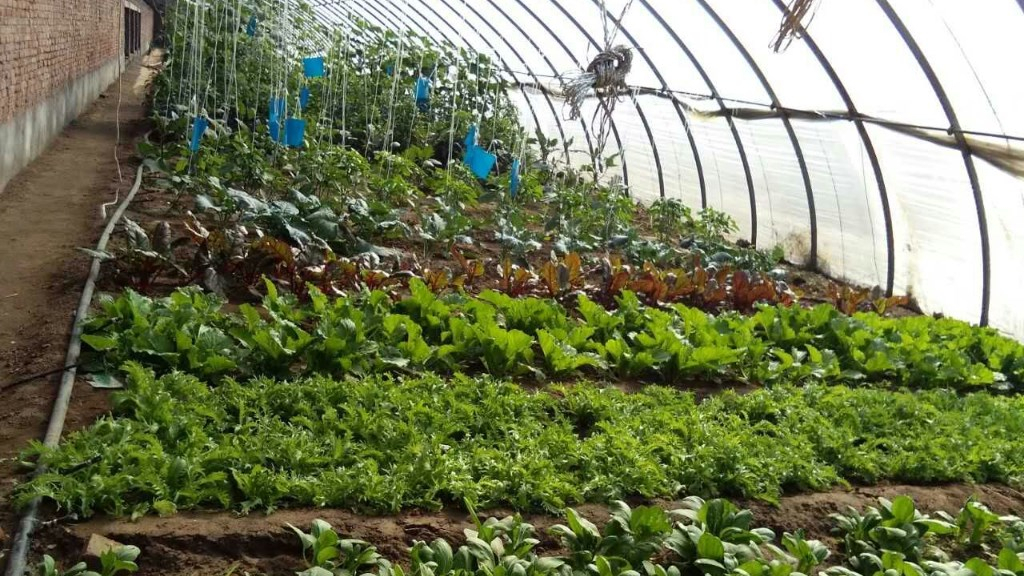 Mr Dong who is driving me to the vineyard, simply enjoys growing something and making a little extra money. It’s a universal pleasure to bring home food from a fishing trip or a day in the allotment, perhaps the pleasure of being man the provider. As we get close, there are stalls periodically set up beside the road;  a little table under a large umbrella selling produce predominantly grapes, but some other fruit and vegetables too. The spare bounty of local peoples small holdings. 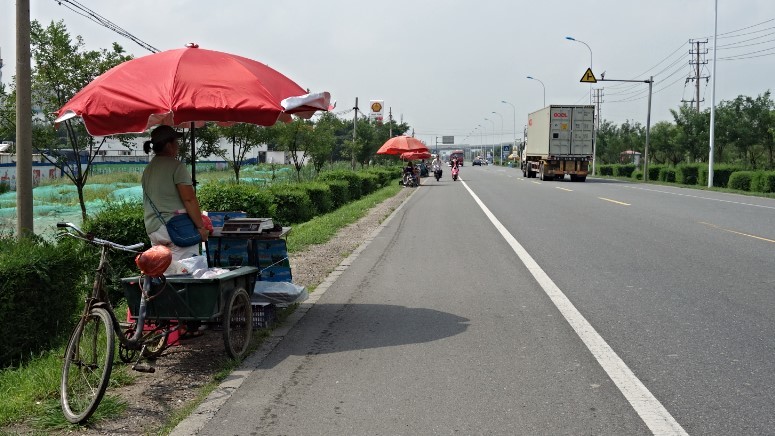 Land reform was one of the first important changes following the Chinese revolution in 1949. At the time over 80% of Chinese people lived from the land either as tennents or  laborer’s in a way of life that had barely changed for 2000 years. It was a harsh life and many scraped by using antiquated tools and methods with little opportunity for improvement. The agrarian reforms changed the ownership of the land from rich, landlords and corporations to the peasants that worked them. It resulted in many families owning small plots of farm land. Travelling by train around China you can still see the patchwork of fields the redistribution created.

Today, just under half of Chinas population remain in the countryside, many families now migrated to the city to work in the factories or start businesses which promise better living standards. But because the land cannot be sold, they still retain some connection, either directly or via their family, to land in their hometowns. Rather than the land lying idle many rent it to other farmers that have stayed behind, allowing them to increase the size of their farms. This has led to higher productivity and better living standards.

Mr Dong’s plot lies in a huge field, divided up into allotments of about 50 by 20 meters. Many like Mr. Dongs are growing grapes, but there are also small patches of onions, sweet potatoes, melons and pumpkins. I’d imagined there would be an army of workers, but there are few people around. 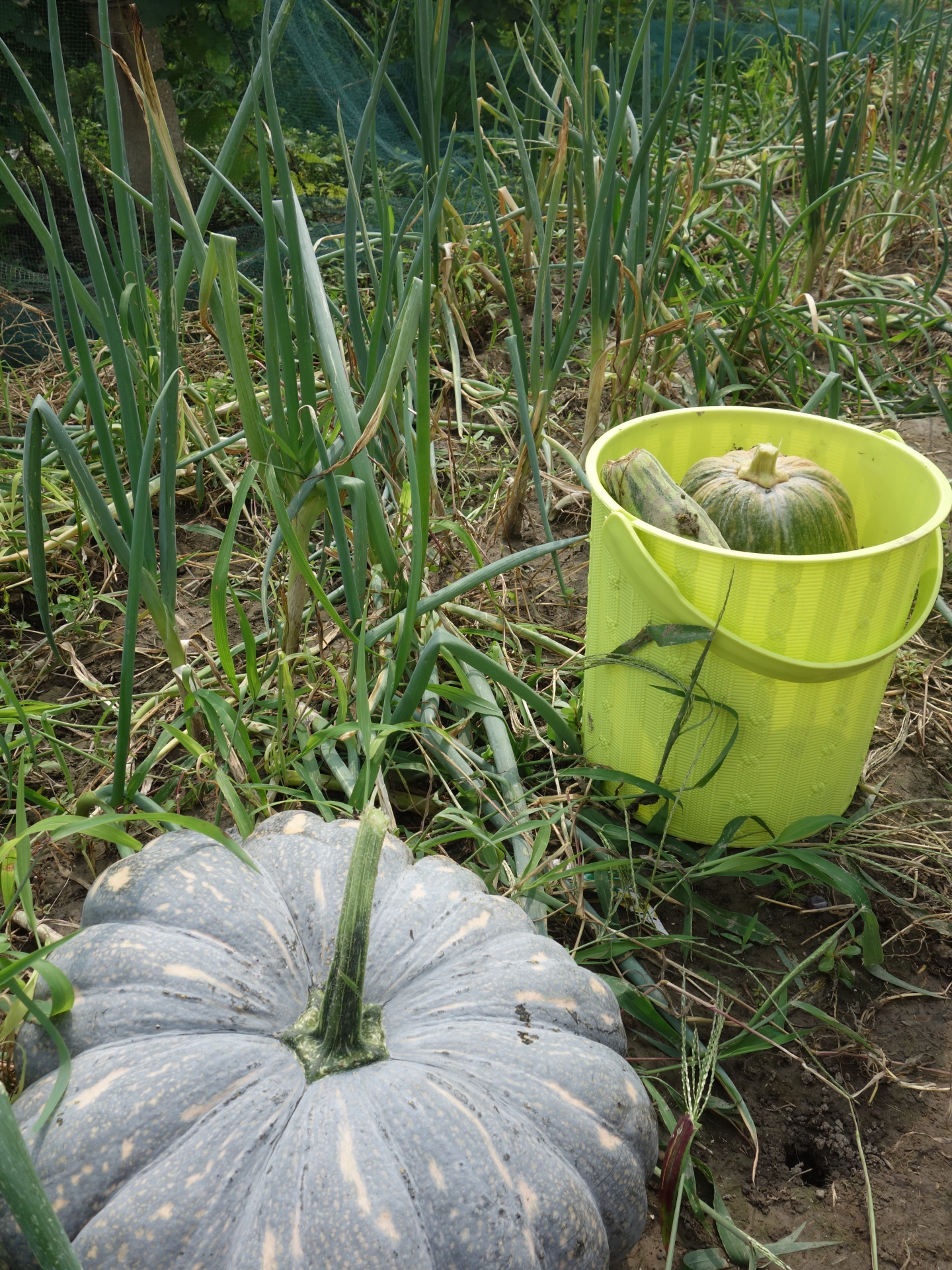 Mr. Dong gets some bags and secateurs from a triangular shed at the side and we duck under the bird nets and start to cut off the huge fat bunches of black grapes that are just hanging there. 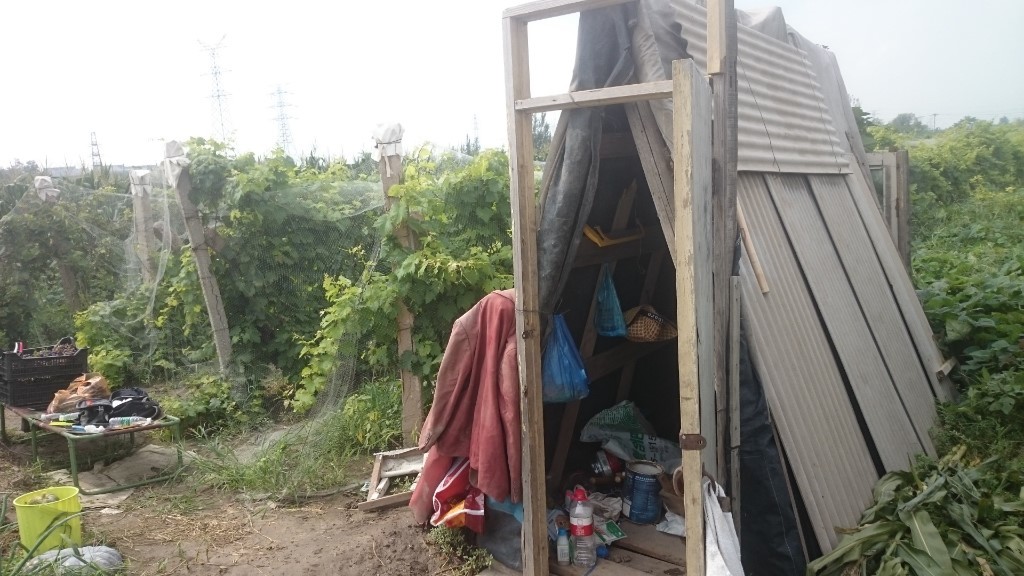 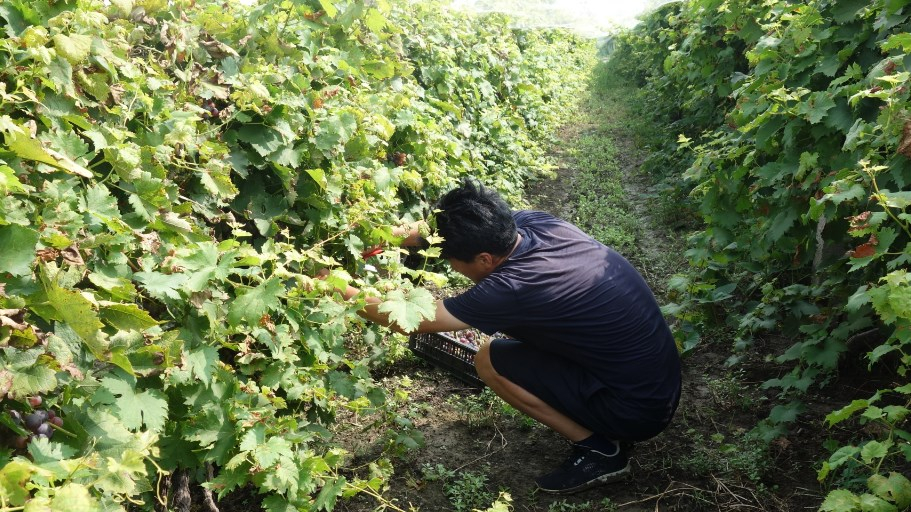 Within an hour my sweating back is complaining, we’ve picked enough to fill the boot of the car and are ready to return towards home. 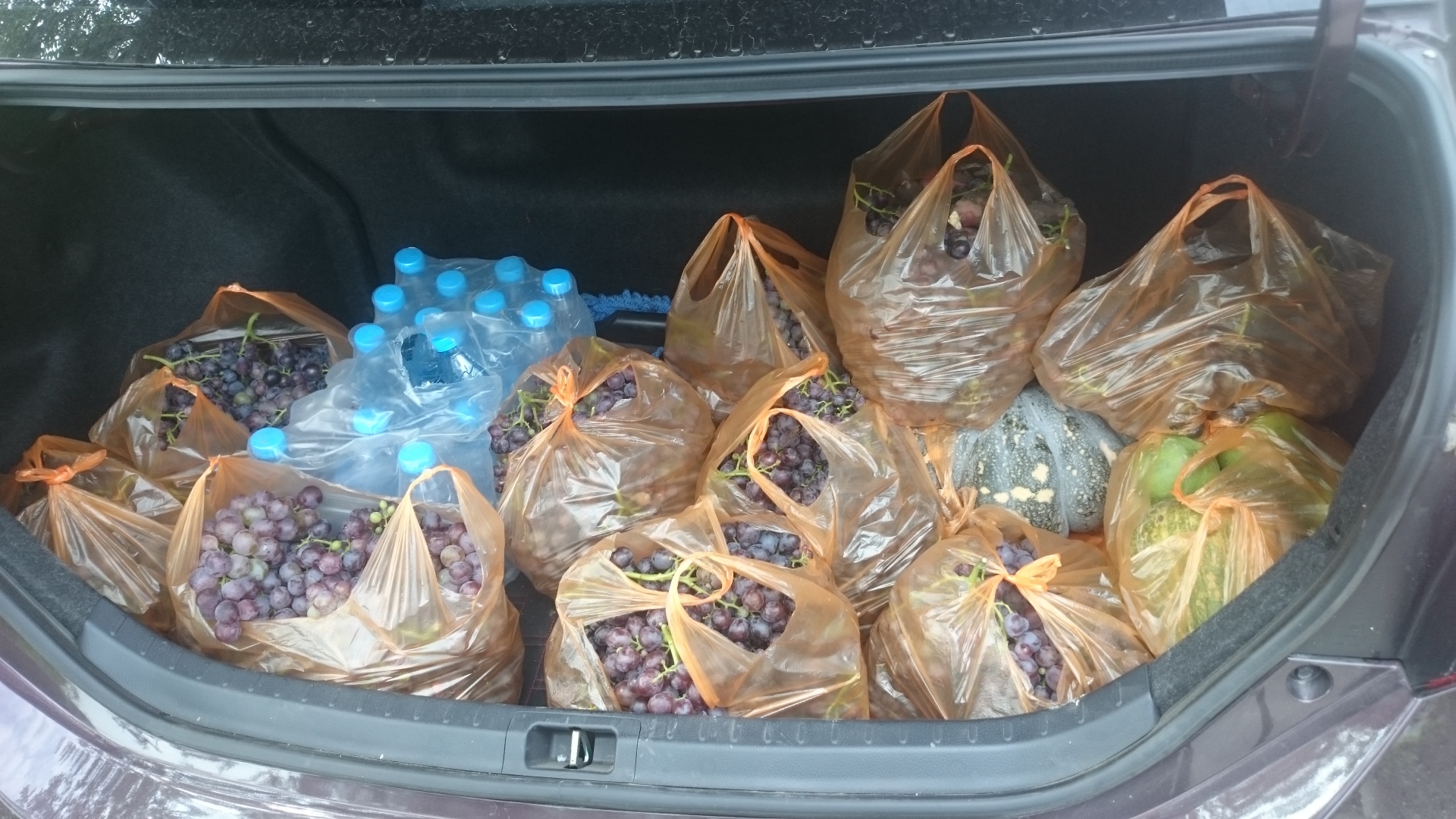 On the way back, we pass through a small village where men and women are gathered around pallets of grapes being weighed and loaded onto a truck. 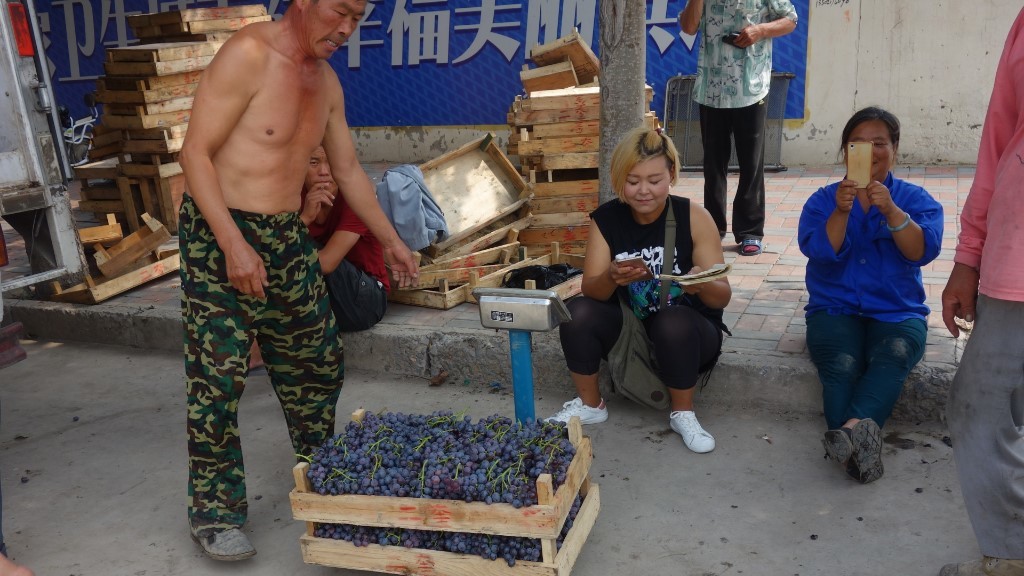 As I watch, a steady stream of carts arrive. I’m impressed with the quantity and quality of the fruit. I’m offered a bunch and they taste wonderfully sweet and juicy. 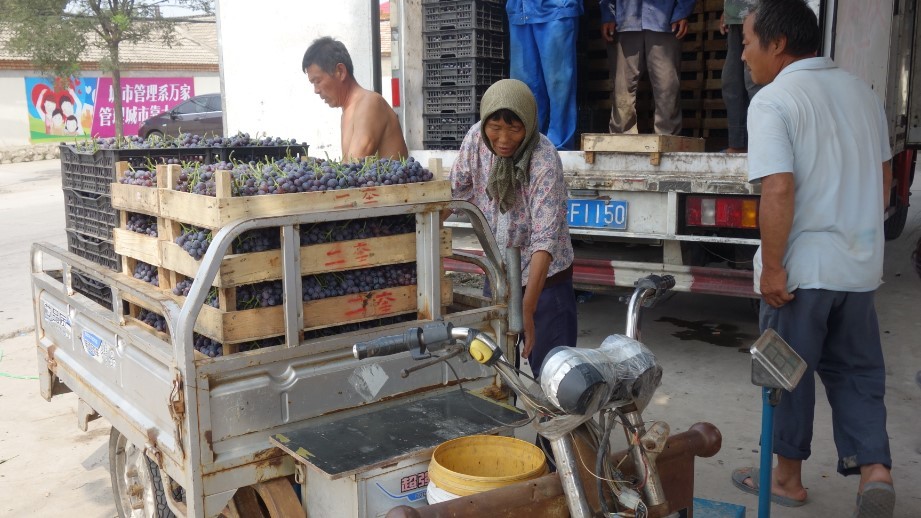 Mr. Dong sells a few bags of his own, but wants to keep the remainder for his friends and family.

We take photographs of each other, then speed back to the city re-educated and with enough grapes for the whole department to enjoy; the new landlords, sitting at our ergonomic workstations in the air conditioning office.