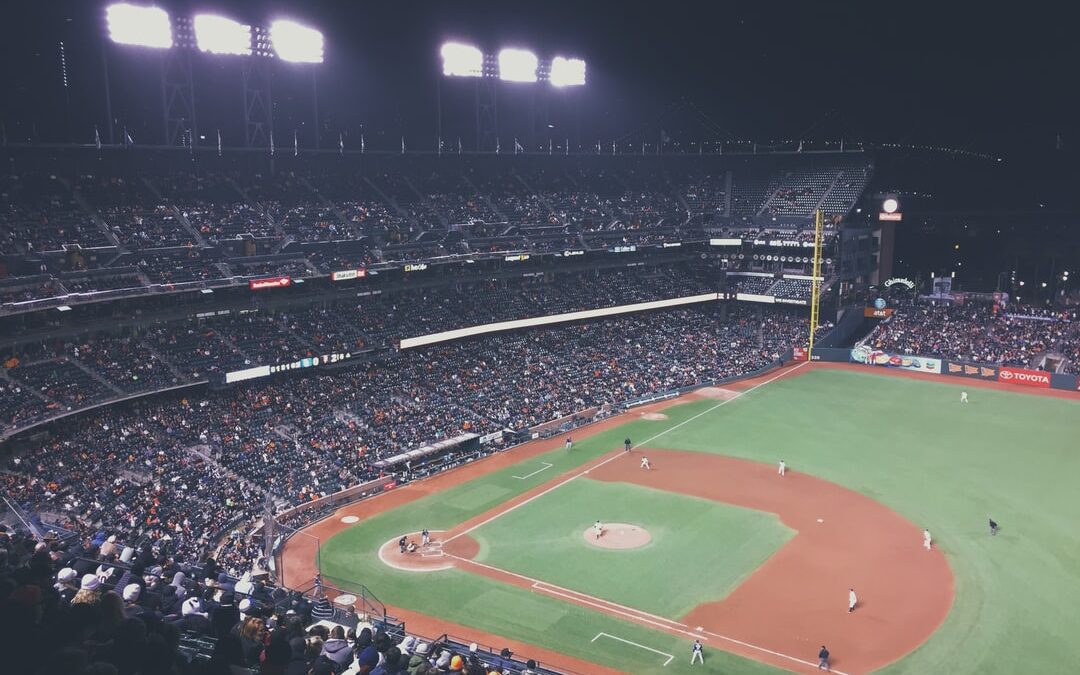 Approaching the North Gate of The Workers Stadium in Beijing there was a bright flash of lightening followed by a clap of thunder, a dramatic effect appropriate to the occasion. This evening arch rivals Beijing Guoan and Tianjin TEDA meet in a match known as the Jing-Jin derby. While the fixture between the two China Super-league teams occurs every year, this was the first where away supporters were present following riots 8 years ago.

The TEDA supporters assemble outside the gate. As the rain starts and disposable rain coats are pulled over the blue and white, it could have been a fixture in England. Under a dripping umbrella, Mr. Wang, a self described super-fan, tells me, ‘neither team can afford to lose, both TEDA and Guoan need the points.’ Other supporters agree, it is a must win game, but none dare express a prediction that TEDA wil triumph. As Mr. Wang remarks, ‘TEDA hasn’t won at the Workers Stadium for 15 years.’

The pessimism is a contrast to most supporters who despite such statistics tend to have an unrealistic belief in their team’s victory. A possible reaction to the general disappointment that Chinese football has provided over the years. The national team has struggled; qualifying for the world cup once in its history, match fixing and corruption undermining credibility in the results. It’s not surprising that while football is hugely popular, it’s foreign teams and leagues that have been largely followed. 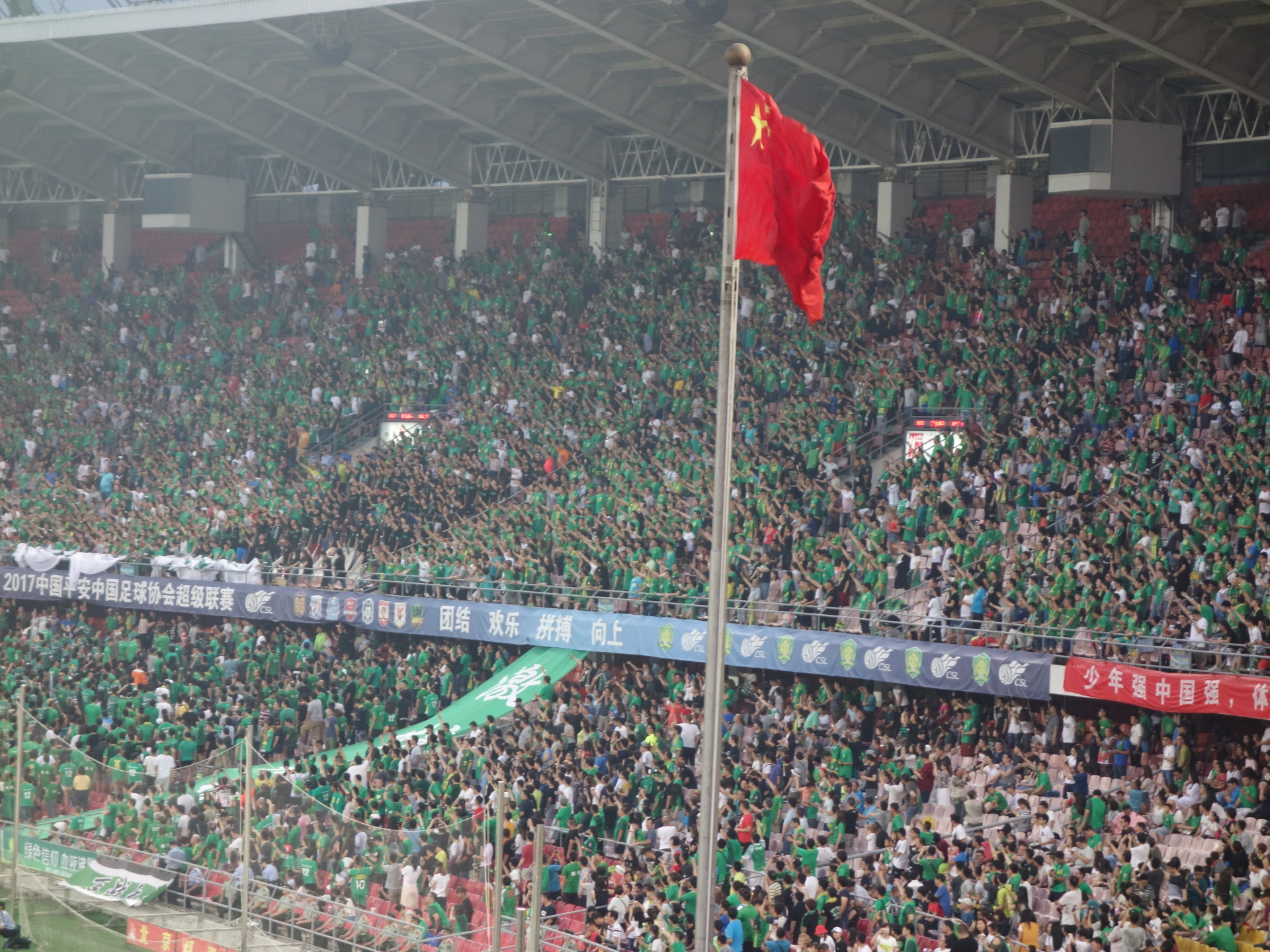 As we enter into the stadium, there is a strong and visible presence of guards, police and soldiers. The away enclosure, is tightly packed with 700 fans that have travelled to see the match, heavily outnumbered by the surrounding green Guoan supporters. The clouds part as everyone stands for the national anthem, a brief moment of unity in the sun. When it finishes, the TEDA end is so crowded that some remain standing, a contrast to other parts of the stadium which, despite an attendance of nearly 24,000, has patches empty.

It’s typical Chinese planning. Like the huge new developments that are eerily empty at completion, but soon fill, China’s promotion of the sport expects to lead to over-capacity crowds. It has the numbers of people, the interest in the game, and the political will that has created a spending boom as money pours into the sport. Headline making investments in European teams buy expertise to develop homegrown talent for the future and attract top foreign players and managers, through ludicrous salaries, to increase the standard of teams in the present.

Both teams on the pitch tonight are fielding 3 foreign players – the maximum number allowed. While not the household names like those recently rumored to be coming, or those that have joined other teams, their contribution to the game is obvious from the opening whistle. Mr. Wang tells me, ‘their value isn’t just the quality they add to the game, they also provide experience to other players.

The TEDA supporters deliver as much noise as they can to encourage their team who start brightly. TEDA have more possession, some enthusiastic midfield tackling and the best scoring chances. Sadly, none of the effort produces a goal. 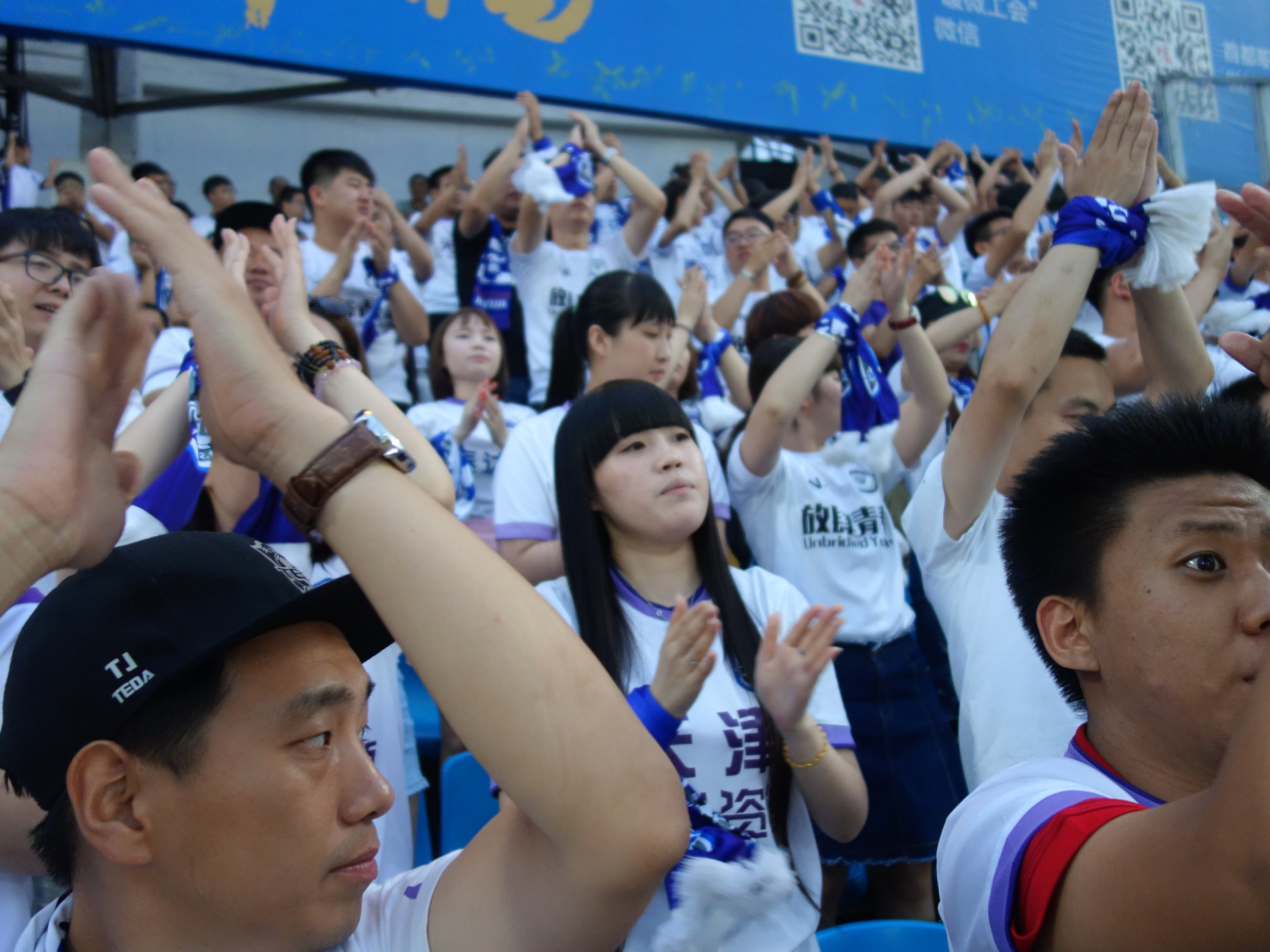 Why the performance of Chinese teams have been so poor is blamed on a number of issues. Most credibly is the lack of support provided by schools and parents who emphasise studying. There are also complaints about lack of facilities. Certainly, there are few grassy parks where you see football being played in contrast to England, where kids kicking a ball around is the norm.

The problems are being addressed with football being made a compulsory part of the national curriculum, the opening of 20,000 football-themed academies and study-abroad programs, all with the aim of producing more than 100,000 homegrown players.

Despite TEDA having most of the early chances, Beijing take the lead at 20 minutes with an easy headed goal from their Turkish striker. Other drama is provided by some feeble fouls and dreadful dives, one of which leads to a second yellow and TEDA being reduced to 10 by half time. The supporters complain bitterly about the referee’s decision. Abuse of the officials is normal when decisions go against a team, but it has added poignancy when set against a history of “black whistles” – a reference to corrupt referees. 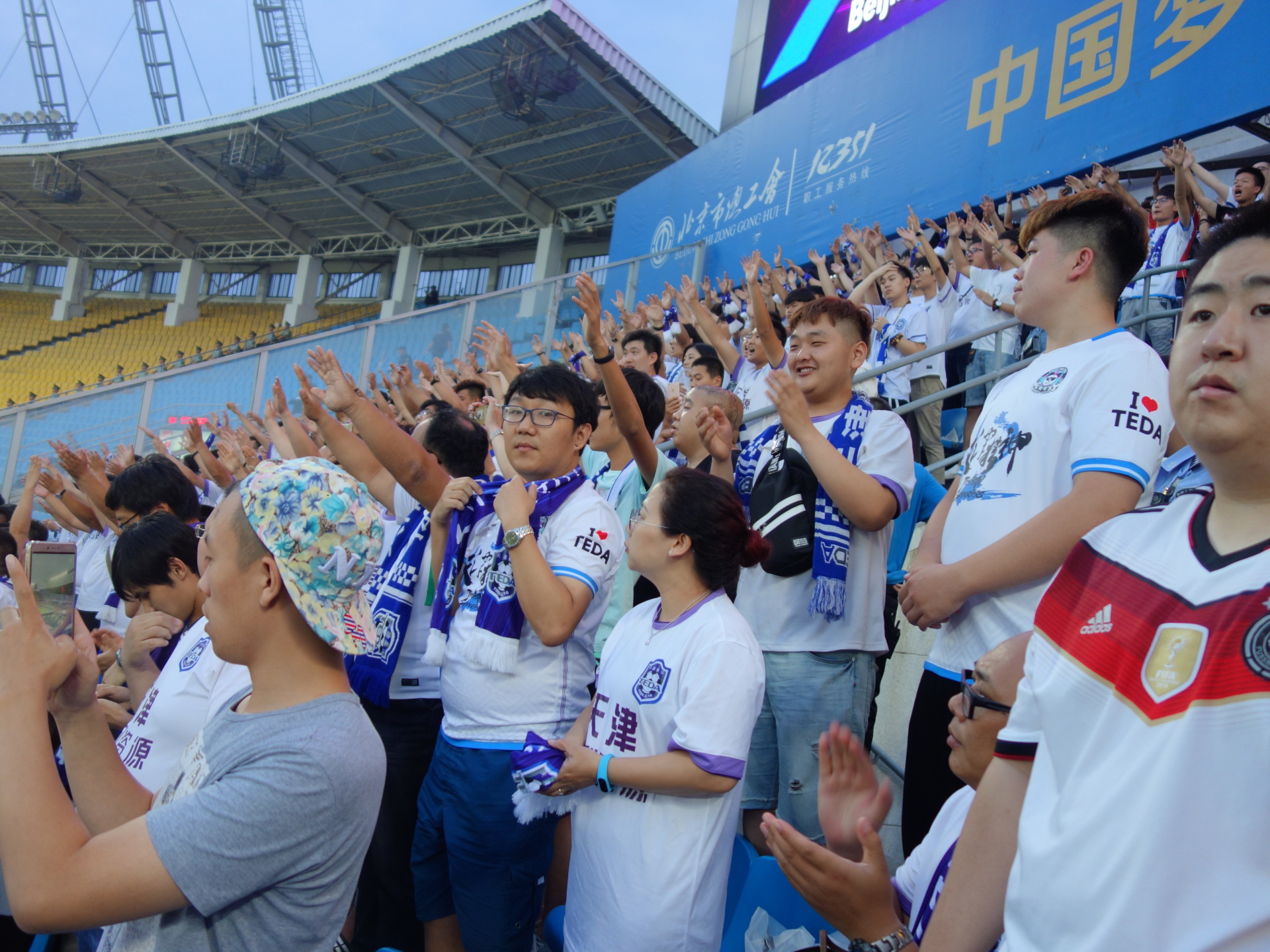 The second half produces little of the opening excitement. TEDA manage to break through Guoan’s defence a few times, but have pitiful finishing. It was up to Beijing’s Brazilian player to score their second, after which TEDA and their supporters looked increasingly tired and hopeless. At this point, in England, the away team would be leaving early for the journey home. Cruelly, they are locked in the stadium until after the celebrating Beijingers have gone.

It is a disappointing result, but an improved performance compared with a few years ago. Mr Wang agrees, joking that the standard at club level was improving steadily, but the national team performance was still poor because we don’t use foreign players.