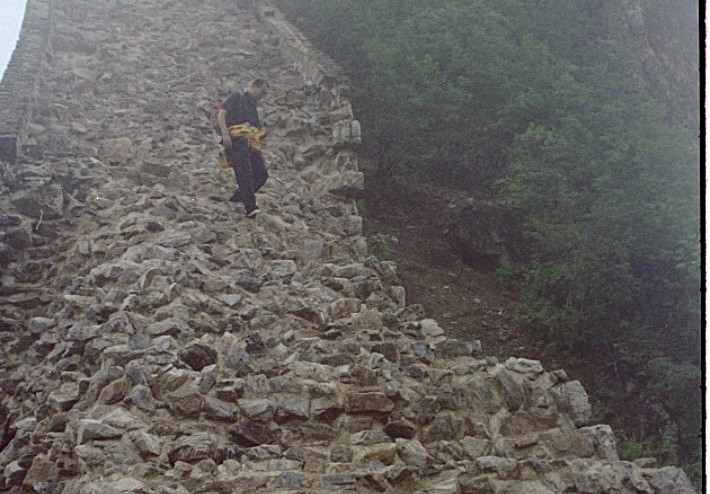 There is no greater symbol of China than its Great Wall. It snakes physically across the north of the country as a visceral reminder of this ancient power, a long, penetrating presence, reaching across Asia. It exemplifies China’s flair for grand projects and for its people, as numerous and their customs as established, as the stones. A barrier that still embodies its protectionism, a motif for the control and insecurity of its leaders. 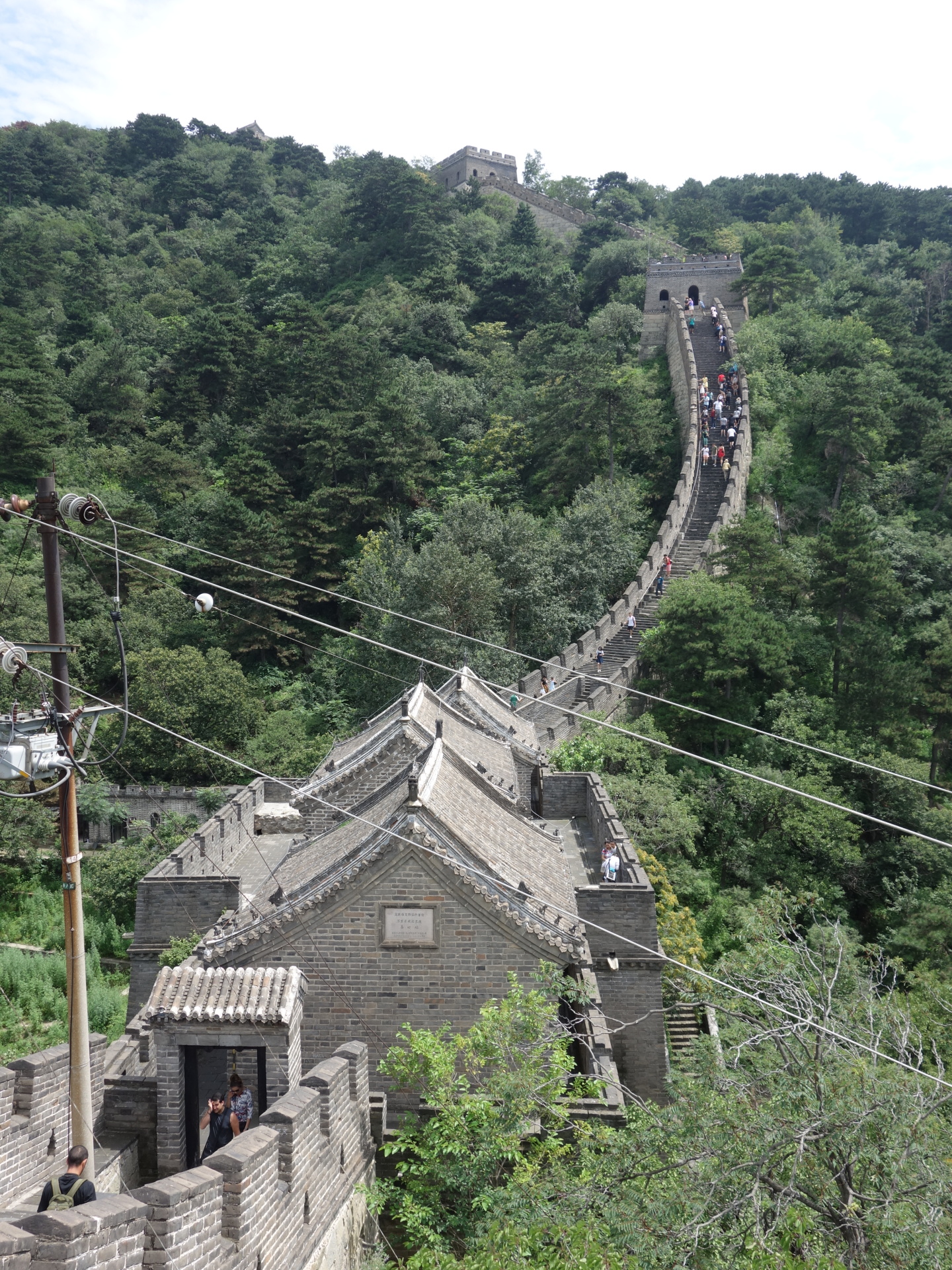 The Great Wall is a bit of a misnomer; the name suggests it is one long structure. In reality, it comprises sections of wall with numerous branches, of trenches and natural barriers. Parts built centuries ago have tumbled to ruin, others have been rebuilt, maintained and enhanced, so that few sections are the same. Thinking of The Great Wall as a single entity ignores its complex reality. Just like its use as a metaphor, is a sweeping generalisation.

Mutianyu is a popular site for the wall. It’s a little out of the way, but can be reached by bus from downtown Beijing. Although nowhere near as popular as Badaling it still has the trappings of tourism, but on a smaller scale. You can reach the wall by walking through the woods, or take a shuttle bus then a chair lift up to the top. [see views of the wall]

For the purist traveller, the installation of a modern chairlift may feel like a desecration of a UNESCO heritage site and that using it encourages more unsympathetic development. But this is a national symbol, the wonder of its physical presence is enhanced by contact with the masses

This section of the wall has been restored, seemingly more sympathetically than at Badaling. But beneath the appearance of authenticity lies the rumour that original sections were completely demolished then rebuilt. Its impressive though, it is the section most likely depicted in pictures and on leaflets. The watch towers and steep pathways are set against the background bands of inky mountain peaks and make great photographs. This is how I always imagined the wall to look. For those who recreated it, perhaps they too had the same image. 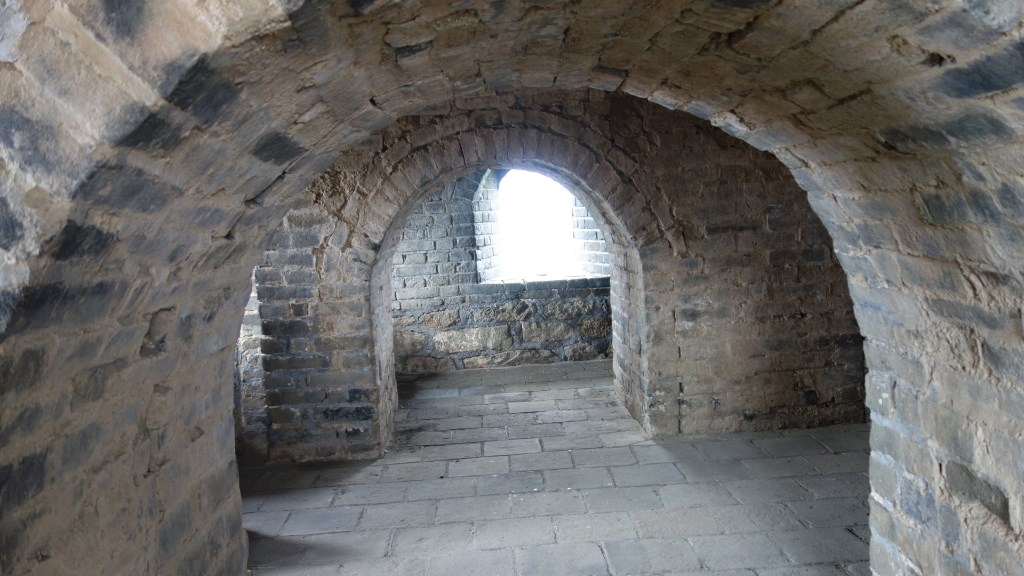 Walking east from Mutianyu the wall rises in a series of quick and very steep stairs before ending at one of the watchtowers. From the windows you can see how the unrestored wall would look, but sadly can’t continue. The route blocked in a sudden concern for safety.

Another section of wall is at Jiankou, a section known as ‘The wild wall’. This part in the Beijing area has gone relatively undisturbed since it was built. This is partly due to its remote location, away from the city sprawl and main roads.

There are steep rises and descents, trees and bushes to get around and loose stones underfoot.  Some parts are so decrepit and steep that it can only be completed on hands and knees, painstakingly picking a route across the loose rubble. Genuinely dangerous, not just because of the ankle turning and long falls that are possible, but because of its remoteness from any help. When you finally arrive at Mutianyu, you have to climb over the fence that prevents visitors venturing onto the dangerous wall.

It is a peculiarity of Chinese heritage sites that you can never be entirely sure what is real. The whole town of Datong is new, a model of what the city could have looked like, or like Bestown made with a veneer of ancient material covering a frame of breeze blocks and steel. Its built at a different site and only in the style of something that once really existed.  Even the plaque describing the original forts destruction quotes the wrong war.

Its a similar story at another section of wall in Jiayuguan. This section, which was originally made from rammed mud, had been reconstructed so cheaply that parts were already chipped away showing the modern bricks beneath. Gate posts had been made of concrete, then sculptured to look like wood. It had all the signs of a hasty, cheap theme park. Most Chinese people wouldn’t notice, most have never seen a building older than themselves. On a visit to a  village a few years ago (the village) I was surprised to learn that the ‘very old’ houses, as they were described, were only from the 1950s. 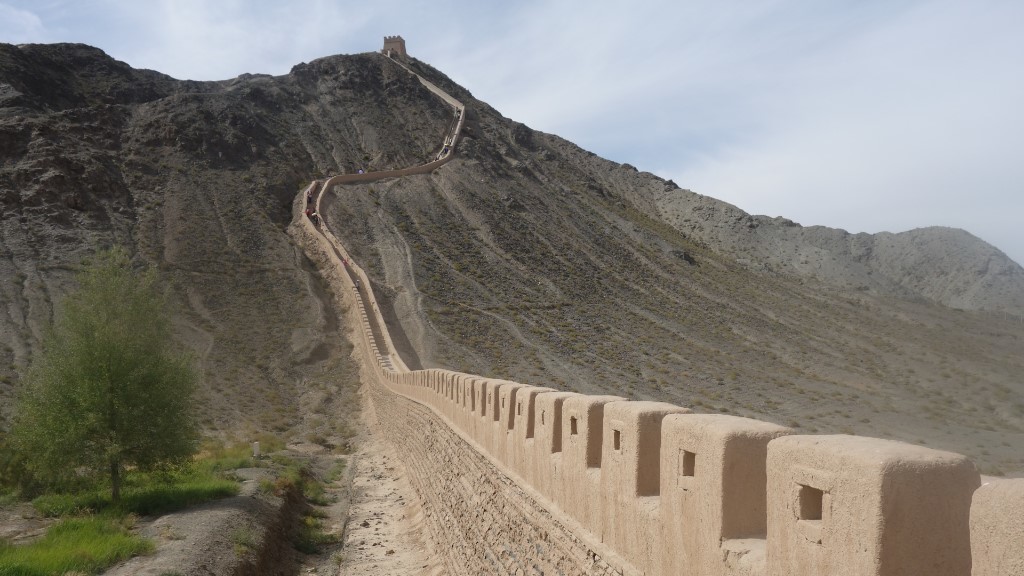 The most interesting part of the wall at Jiayuguan was the collection of photographs taken by two westeners of sections of the wall. One set was taken in 1908 and the second set of the same places was taken in 1998. The pictures showed the appalling deterioration of the wall, but for me, the biggest shock was how well preserved they were at the beginning of the century. They had survived for hundreds of years and had not fallen to ruin by the ravages of time,. Like much of Chinese culture the worst destruction had occurred relatively recently.

The Chinese like to talk about the wall, about how old it is, how its the only structure visible from the moon. But neither is really true, Much of the wall was constructed in the 1500s, then rebuilt in the 1990s, or even more recently. It is rather like all their history and culture, a vague mix of facts, fantasy and mythology. You never quite know what it true or real.

Of course this is true of much of Chinese life, where news and information is hidden or doubted so internet stories and superstition have equal validity. Where people hide their real thoughts and feelings only showing the all important outward face.  Where barriers are raised under the guise of protection, or safety. Where history is manipulated to emphasise the past greatness and antiquity of China, and its problems from unjust treatment by foreign powers. Its a narrative that is as old and as established as the image of the wall; of a civilization as linear as the wall’s history, of a people as contiguous and cohesive as its sections and the stability of the country’s recent rise, as flaky and as fake as the reconstructed ramparts.

But just as money, the economy and power all take strength from the confidence of people, the masses, transported on chairlifts to take selfies in front of their wonder of the world, can gain comfort from the Great Wall.  They can see it seemingly endless behind and in front of them. Its something real, solid and permanent. A symbol of security in a precarious and hostile world.