Karaoke has to be the most popular entertainment in China. Since it was introduced from Japan in the 1980s it has grown to over 50,000 dedicated venues across the country. Many are packed out at weekends and evenings and especially around spring festival- some are open all night.

At first, Karaoke was just a video player and TV which people would pay to use, singing along unashamedly in the street. Not a big cultural change for Chinese people who were already familiar with shrieking Peking Opera, and waltzing along to ballroom music in the parks and squares. By the time I first visited in 2006, KTV as it’s called, had become a big crowd puller in bars, hotels and specialist venues.

In contrast, in the UK by this time, the short-lived fad had lost its popularity. The drunks in mid-week pubs, slurring through renditions of My Way or I Will Survive is the typical British experience of karaoke. And although 30 years have passed, since its peek, its barely evolved; both Frank Sinatra and Gloria Gaynor are still listed as the most popular acts in the few venues and on-line karaoke sites that still support the small UK fan base.

It’s almost impossible to avoid KTV in China. You can make excuses for several visits, but eventually and without warning you will find yourself in a packed-out bar where people were paying quite large sums of money to sing. The crowds will applaud and cheer each performer wildly, sometimes sending flowers and drinks. No one ever criticises or gets booed, no matter how bad they are. A total opposite experience to the west where heckling the vocalist is as entertaining as the competition to sing the worst.

While there are still bars where Karaoke is performed, the most popular venues now are KTV clubs. Often these are grand fronted buildings with gold revolving doors that open into wide red carpeted foyers of marble or guilt decor.

Beyond the front desk, the glamour continues into a maze of separate rooms which you hire out by the hour. Before Xi Jinping became leader, the entrance would often have lines of beautiful young girls dressed provocatively, or scantily, ready to accompany you to your room, serve drinks, sing and entertain you. In the more expensive places, where important meetings were held with local politicians and shady business deals arranged, many of the girls would be models earning large sums of money in tips as they massaged the ego of the VIP guests. There was also opportunity for the girls to acquire useful contacts and earn more money privately later in the night, consequently the jobs were much sought after.

Over the last 10 years, most of the hostess girls have gradually disappeared from the clubs, their cost stifled by the campaign on corruption. Now you buy your own drinks from the shop and order snacks or baskets of fruit from a menu. Team building and corporate events will often purchase a set package of beers, or large bottles of coke and whisky and bowls of nibbles. There’s a big mark up on the price, so if it’s a small private party smuggling in a few bottles is the norm.

The rooms are often garishly decorated with plush seating on two or three sides depending on the size, and a table for the drinks and snacks in the middle. There is a lighting panel to adjust the darkness, coloured spot lights and glitter ball, a small stage and a console for selecting the songs.  The environment is intended to portray a luxury befitting the important star that for three minutes you and your sycophantic colleagues can pretend you are. 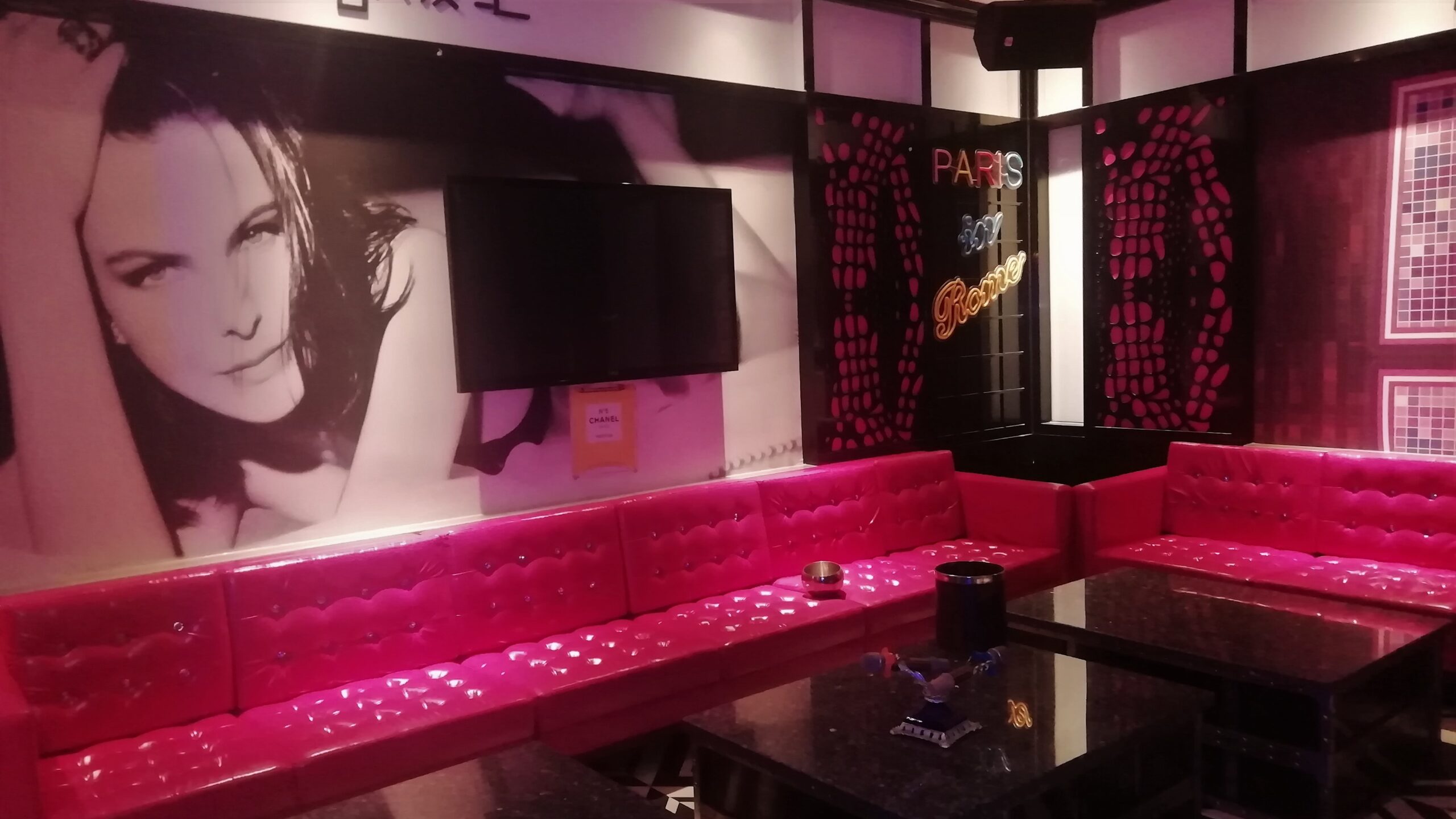 If you are in China for any length of time, you will be expected to give a speech, do a song or a dance. Public performing in China seems to be as much a part of their culture as Salsa is in Cuba or guns are in America. It can take a few visits to pluck up the nerve to humiliate yourself by singing. However, no matter how bad you think you are neither the original artist nor the audience will kill you. It’s actually better to get up and perform rather than sit listening to hours of tedious Chinese love songs being covered faithfully and unemotionally while staring at the subtitles on a cheesy video.

The videos that accompany the songs, if they are not the official version, default to inappropriate Chinese produced stock movies that appear to have been made in the 1980s. You can be singing The Verve’s Drugs don’t work while a young couple with mullets and Princess Di hairstyles are walking dreamily in a park.

There is actually a bit of skill involved in singing. It’s tempting to try and pick something hip and fashionable, something by a favourite artist; this is the wrong approach. It is more important to pick a song that’s fun to sing or at least easy. And it’s surprising how difficult some songs are unless you are a natural performer. Tracks that you considered simple like Amy Winehouse’ Back to Black will sound like talking rather than singing. Without skill repetitive songs become very boring. It takes time to find what you can sing well and enjoy singing. David Bowie is good, as is anything loud and shouty like Bon Jovi.

Of course, you have to find songs you know to start with. The console you use to search and select the songs you want to sing, sometimes have an option to change the language to English. They have an international section and then sub groups by band, male and female singer. After that, they will be arranged alphabetically and you can either search by name or scroll through a couple of hundred pages. It sounds like a lot of choice, but more than half of the artists you will have never heard of and among the names you do recognise will be a surprising number of actors like Leonardo di Caprio or Jenifer Aniston. When you do find a band or artist that’s appealing, many of the tracks available won’t be what you’re familiar with.

If you go with a large work group make sure you queue up a few tracks then keep an eye on their progress. There always seems to be one person who wants to croon into the mic all night and will move their choices up the list so that yours never surface.  As the night goes on many of the boys – it is most popular with young people. -will be drunk. As you walk down the corridors between the rooms a door will open and a lad stagger out to spew in the toilets. Behind him, a collection of more youths will be sprawled over seats, half a bottle of Jack Daniels sitting on the table among the shells of sunflower seeds and monkey nuts. As you pass each room someone will inevitably be shouting a ballad into a microphone. 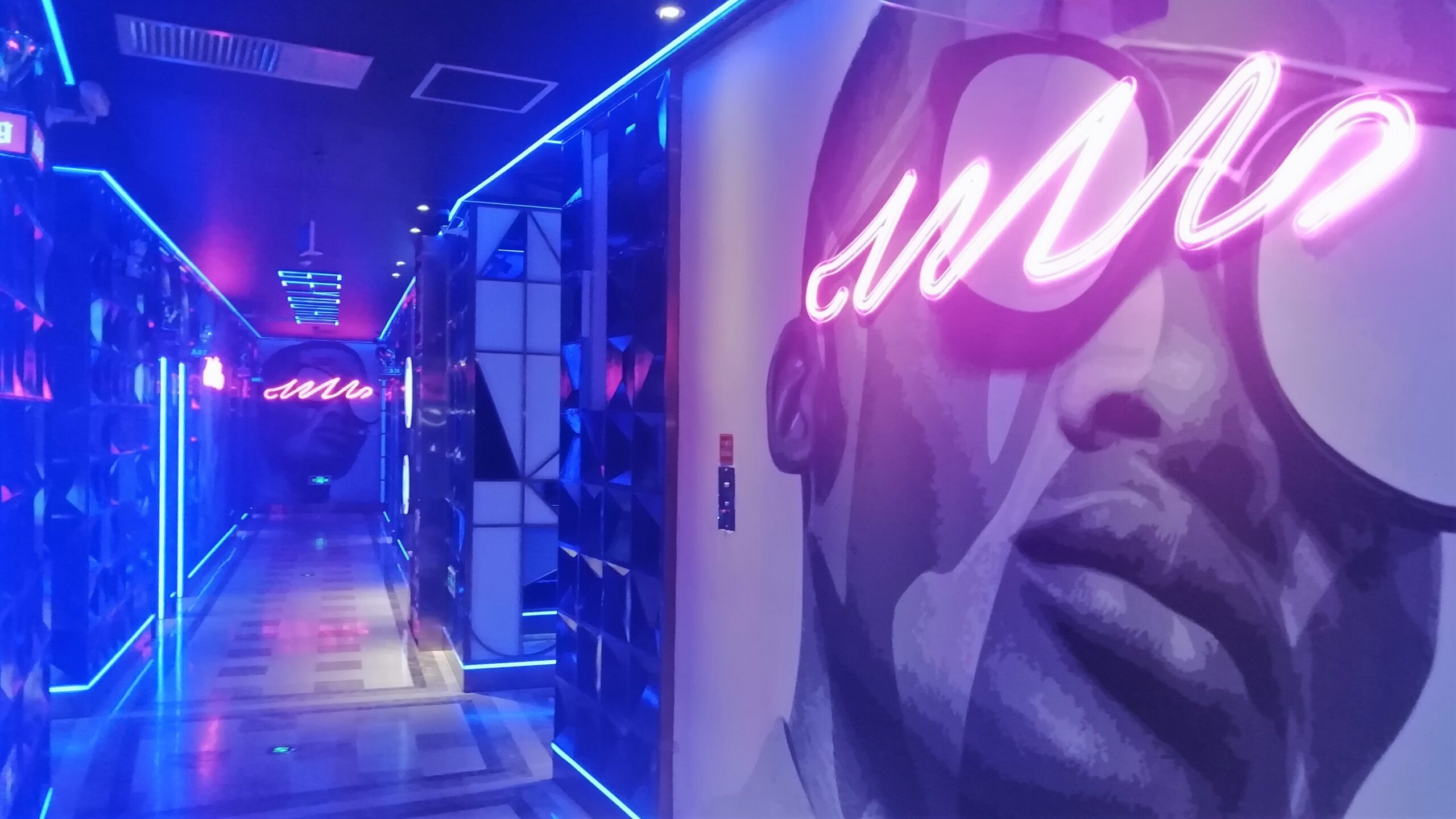 A smaller KTV option are the booths that you can find in shopping malls and cinema foyers. The little glass rooms are a bit larger than a telephone box and seat 2 persons comfortably. As they are completely sound proofed from the normal world outside, they are an ideal place to rehearse songs before getting in front of a live audience. There is of course no bar, but that doesn’t mean the singing will be any better. In fact, it sounds far worse because you’re hearing your voice mixed through headphones and half drowned by the accompanying music. If you want to hear how good you really are record yourself on a phone absent of the backing track. 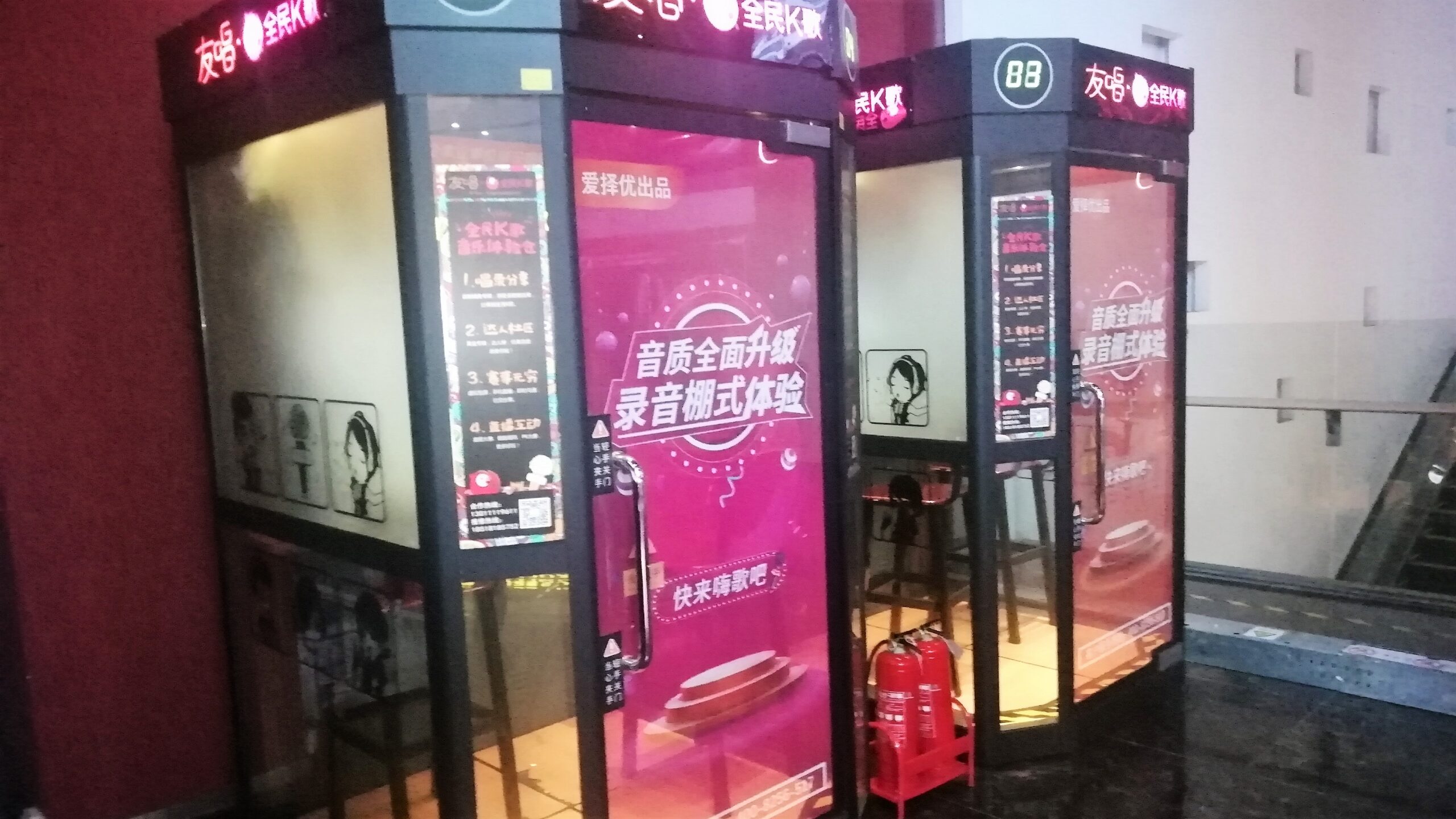 In 2018 the government started cracking down on copyright infringement and ordered over 6000 popular songs to be removed from KTV playlists. Among those removed were by some of Hong Kong, South Korea and Taiwan’s most renowned artists. More recently, China’s Ministry of Culture and Tourism created a list of off-limits songs for playing at karaoke establishments. Songs that contain references to gambling, violence, drugs, criminal acts or obscenities, promote cults and superstitions, violate the country’s religious laws, or endanger China’s sovereignty were scrubbed from song databases.

The constant tightening of the rules over the years has had a big impact on the business but it hasn’t affected its popularity, which continues to thrive. Corona virus however has resulted in many places closing. With each outbreak of infection, they are always the first to shut and the last places to reopen. Around the neighbourhood several look permanently dark. Perhaps they are using the chance to update their décor or equipment for when things return reliably to normal. Its unlikely the passion for KTV is finished in China. 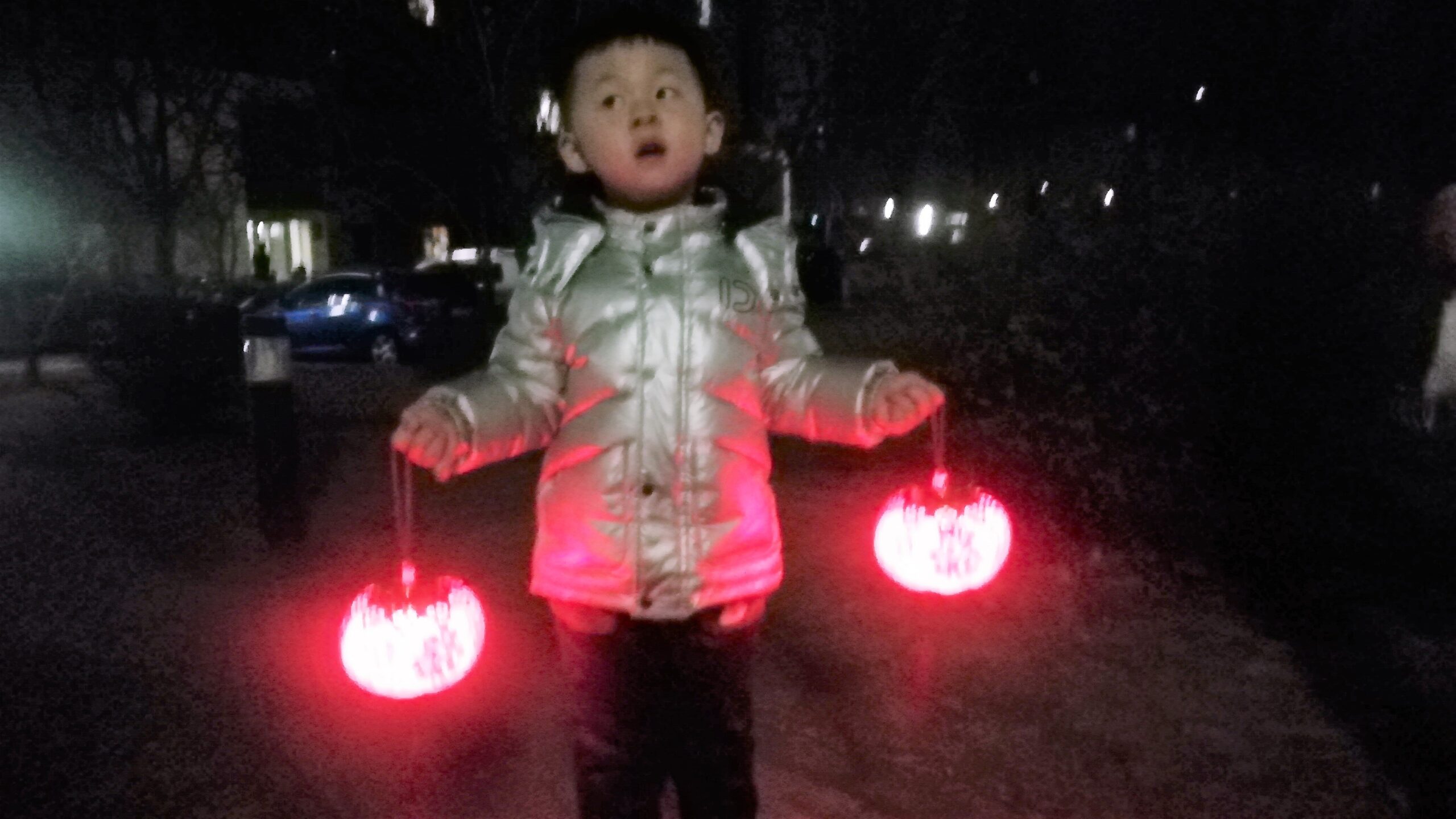