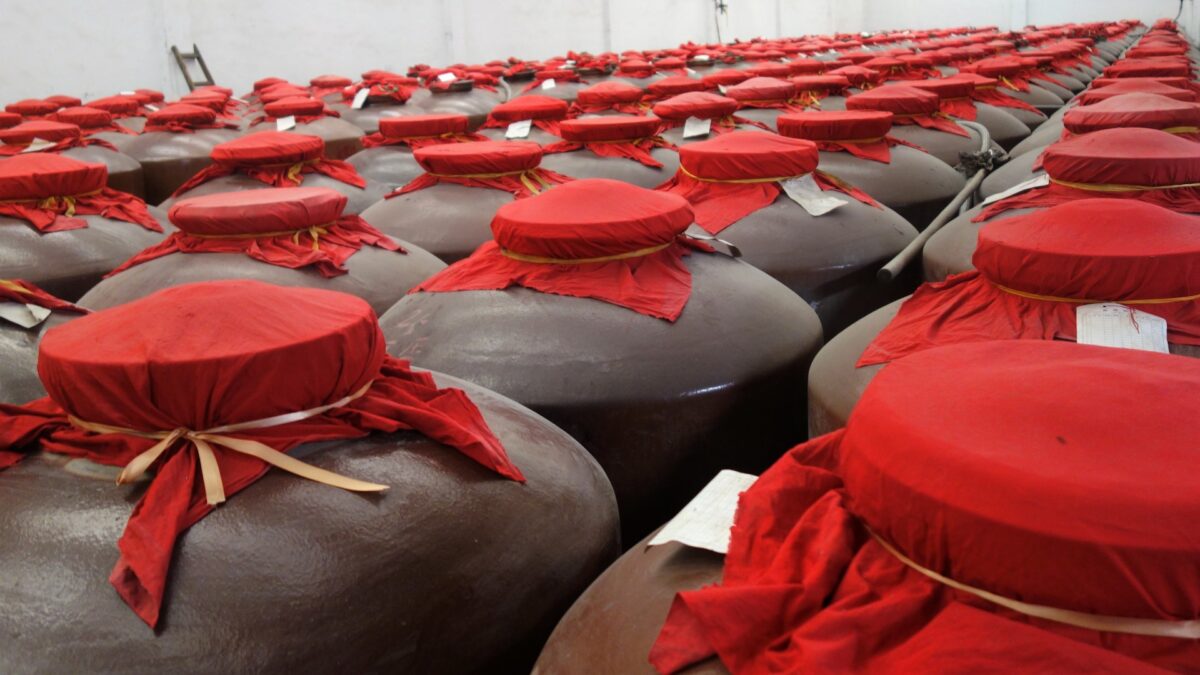 The Tianjin Lutaichun Baijiu factory is located off a busy road that skirts a bleak industrial park on the outskirts of the city. Its unimpressive entrance is flanked by a red square hotel on one side and a recently cleared construction site on the other. Ms Yang the production and test Manager meets me and explains they are building a museum to showcase the company’s history and promote its importance as an Intangible cultural relic of Tianjin.

This accolade recognises the founding of the distillery in 1662, at the start of the Qing dynasty. It still utilises local ingredients and spring water to provide a flavour of China’s famous drink, unique to Tianjin. The spirit has won several international awards and enjoys national protection in recognition of its non-material heritage status.

Today, the company occupies a number of large low-level buildings where a gentle breeze is blowing across their roofs, carrying the sour smell of fermenting sorghum – the main ingredient of Baijiu.

The aroma drifts from a pair of open doors of a large concrete hanger where the first stage of the fermenting process is carried out. Inside is dimly lit by a row of windows, high up the whitewashed walls. Near the doorway, a gang of men are quickly mixing sorghum and wheat on the concrete floor with shovels, adding water from a hosepipe in a routine like cement making. 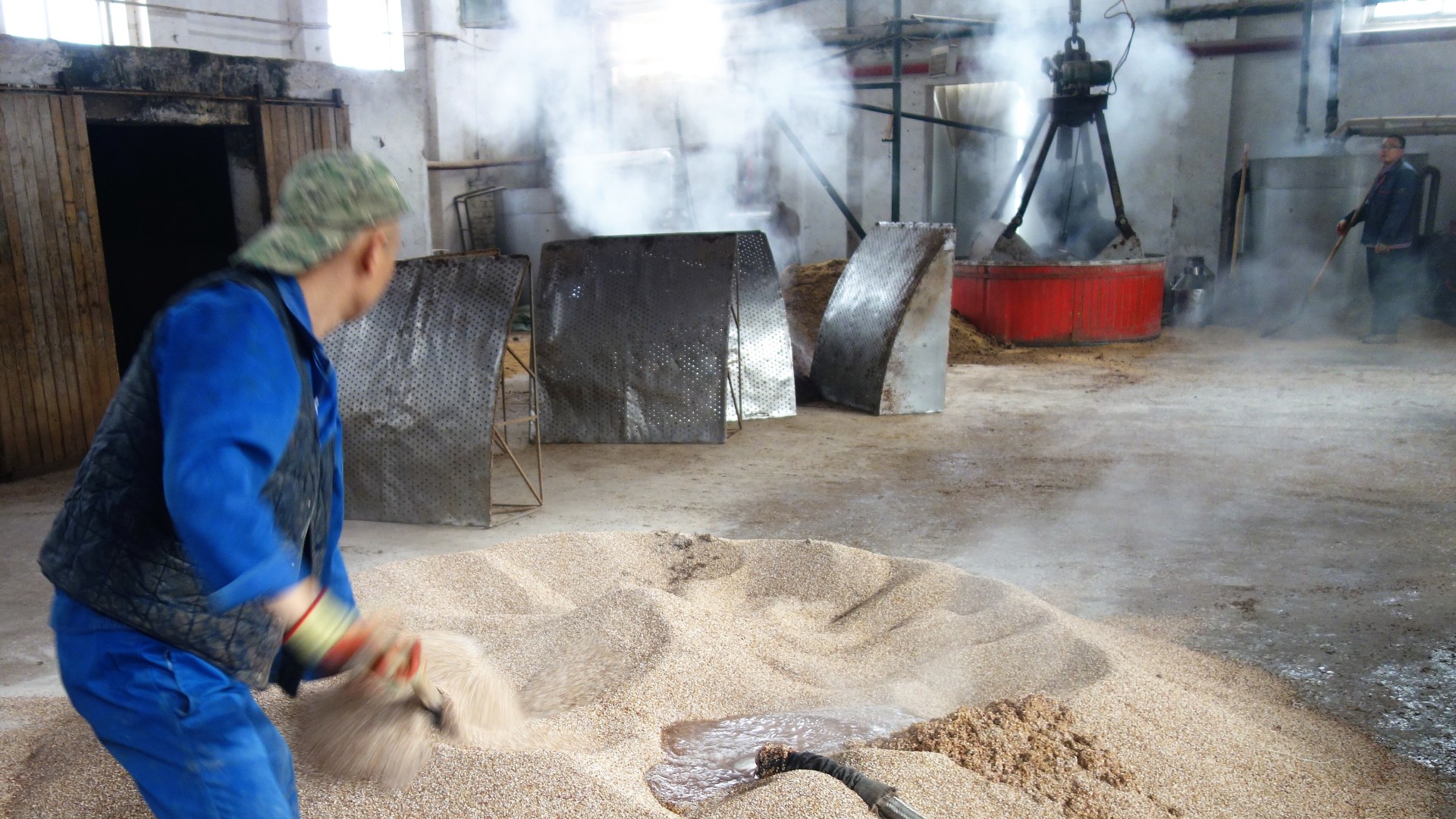 Behind them, clouds rise from round concrete tubs. I’m told, it’s from water boiled from deep underground springs. It softens the mash which is then dug out by an antiquated overhead crane, spreading the still steaming and pungent concoction onto an area to cool before being sprinkled with yeast. The men work with the steady confidence of experience. Nothing is measured, or weighed or timed. 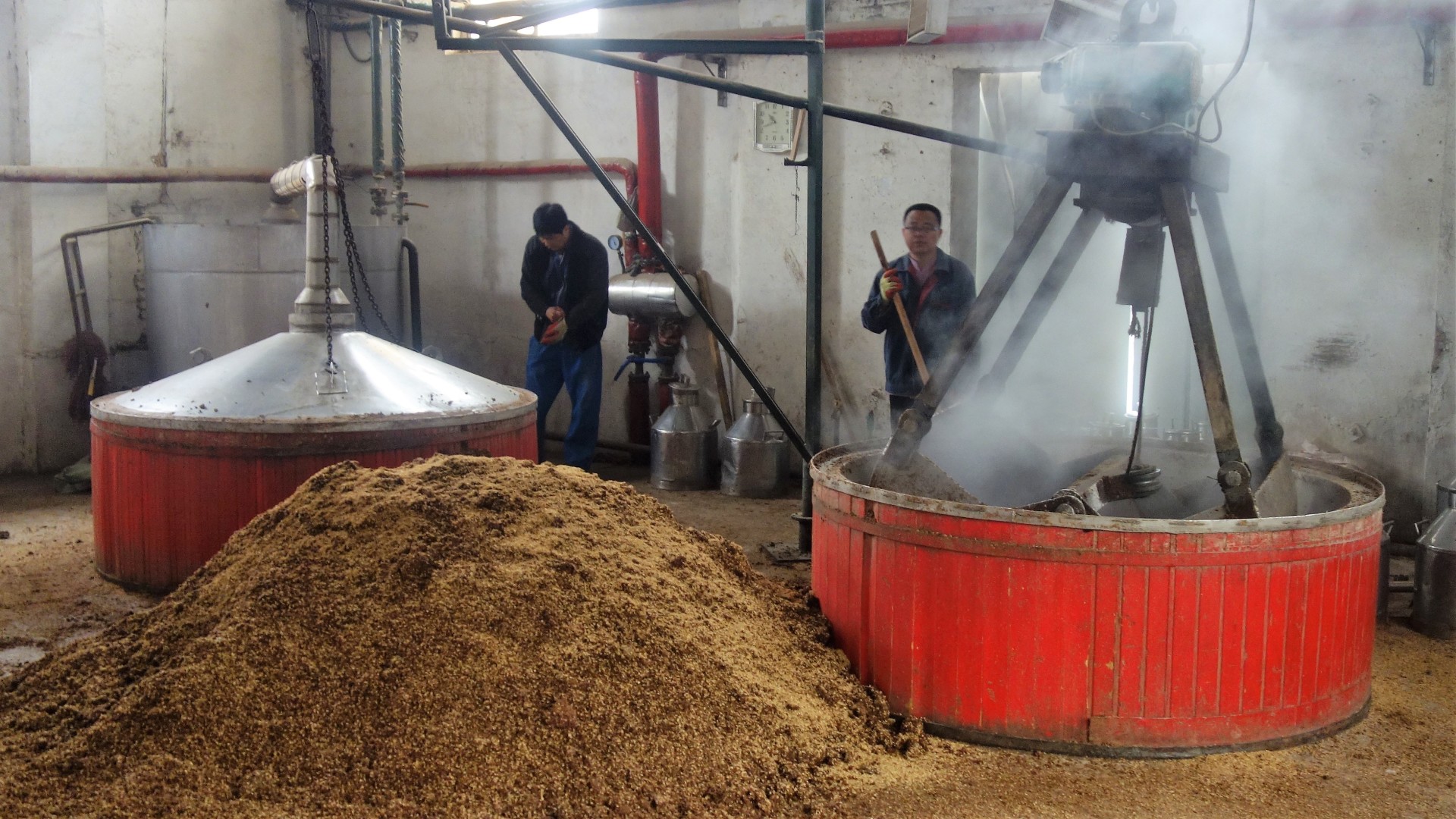 Towards the rear of the building, in the dimly lit interior, the floor has been divided into rows of square stone tanks, sunken into the floor in a giant waffle like pattern. Each tank is about 4 feet deep and contains the yeast laced mash, covered in a straw matting. I follow Ms Yang along one of the low narrow walls that divide them. In the shadows, sparrows scatter. A digital thermometer sticks out from one tank, reading a warm 30C. She lifts the corner of the matting and am surprised to see the surface is covered in mud. ‘The local mud is rich in microorganisms,’ she explains, ‘it keeps out the oxygen.’  I remember the word anaerobic from a long ago school lesson and jot it into a note book to look up later. 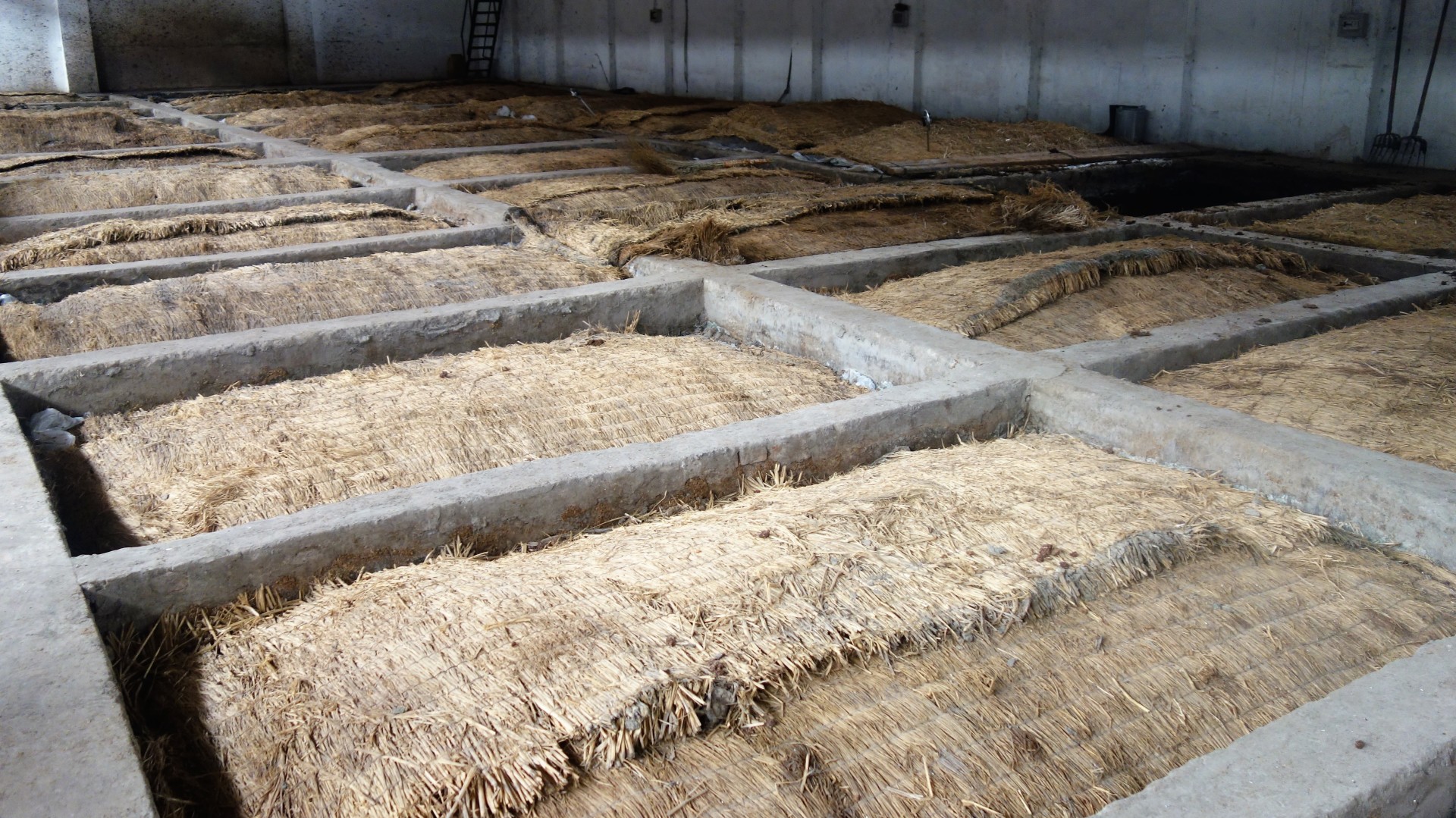 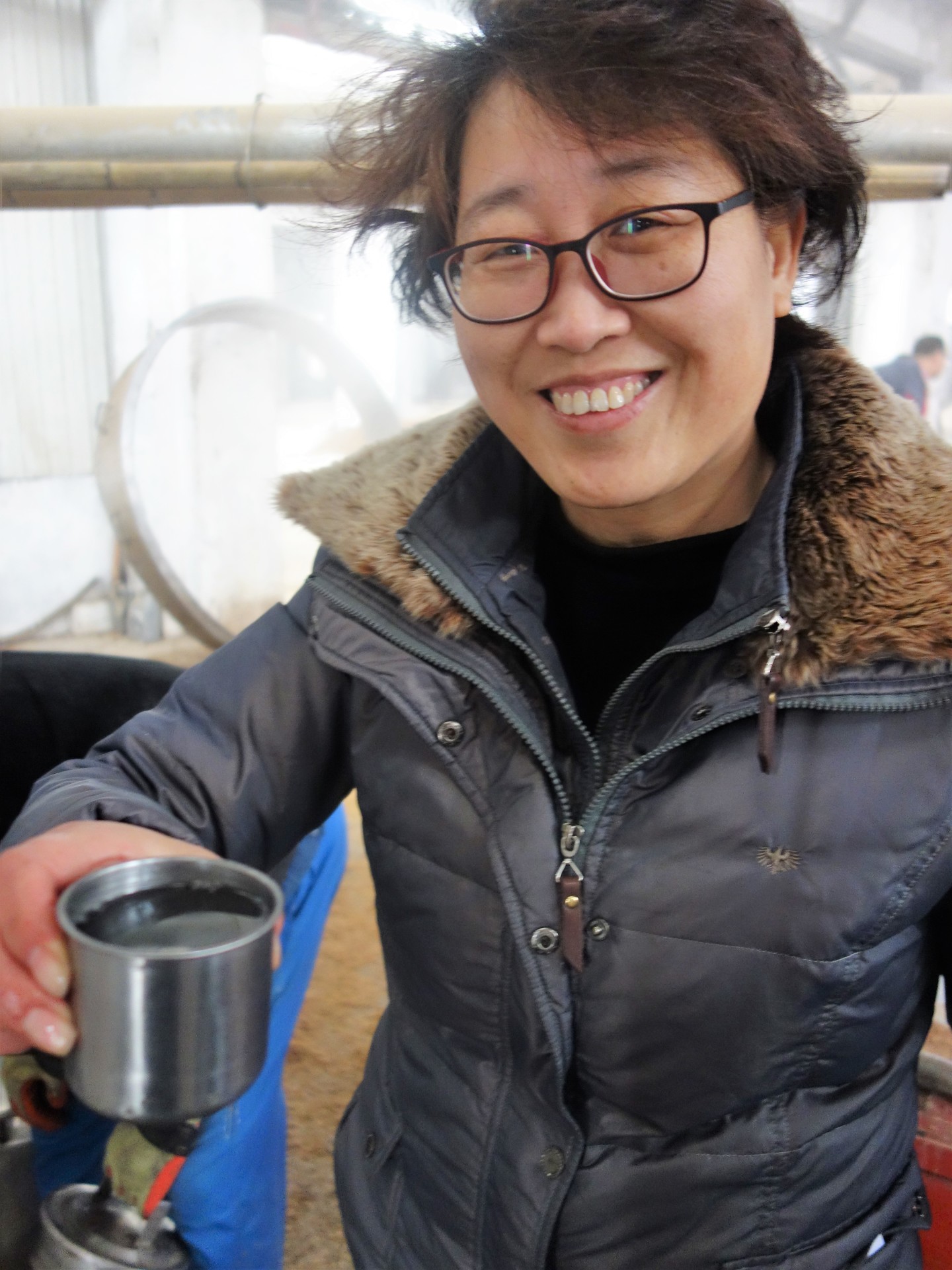 When the temperature of the snugly wrapped infusion falls, it’s the sign fermenting has finished. The bed is emptied into a second still and steamed again. This time, a stainless-steel cone collects the vapour where it condenses and streams steadily from a short pipe into milk churn like containers. Ms Yang collects a sample of the clear liquid for me to taste, warning me against swallowing what is almost neat alcohol. It has the characteristic Baijiu flavour and a burning rawness of methanol.

The process of mixing, and filling one still, then steaming and emptying the other is a continuous job – decidedly low tech. The crane and occasional stainless-steel component are the only concessions to the old shovels, wooden hand carts and buckets, unchanged since the Qing dynasty.

We leave the warm moist shed, the busy labourers and its pungent smells, for the next building and stage of the process. In another large hanger the Baijiu has been emptied into dark brown pottery jars and left quietly to mature. ‘The liquor can breathe through the pot’ whispers Ms Yang. The long shed is full of rows of jars, each one tagged and tied with a red cloth around their lids. They stand silently and patiently like the terracotta army. At the rear, guarded by the ranks of slumbering sentries sit several square wooden crates, lined up like a roughly hewn container park. Ms Yang says they are over 100 years old. Inside, is the oldest Baijiu at least 40 years, a special recipe flavoured with the blood of deer from the north of China. The wooden sides are reinforced with rusted girders and painted in Chinese symbols like you’d imagine would be scribed by ancient priests to keep a strong spirit, imprisoned for eternity. 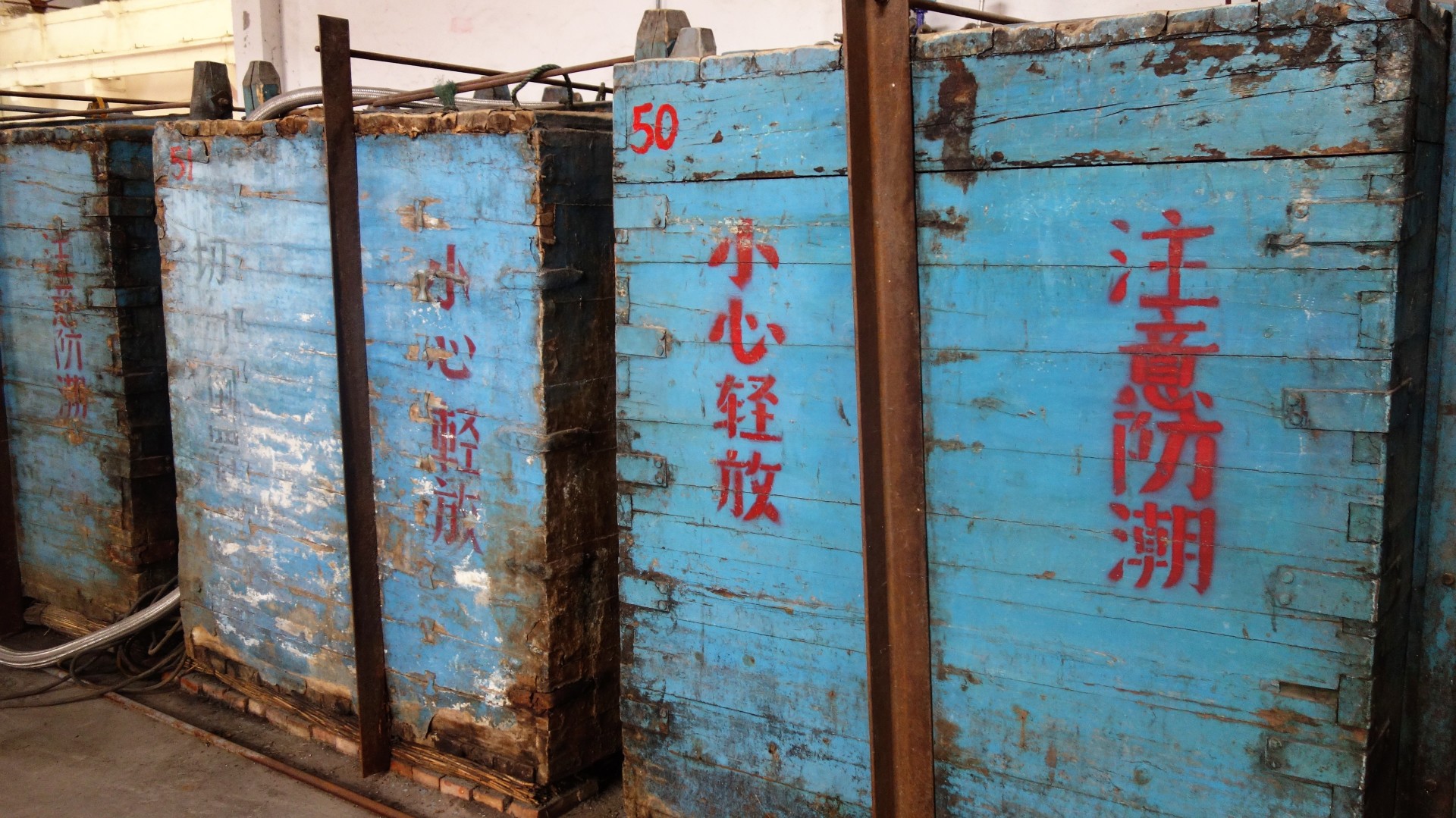 In another building, this time divided into stalls, yet more jars fill the spaces. Green patches on the walls and dark stains bleeding from the ceiling make this part feel more ancient. Shelves line the walls displaying the different designs of bottles used through history. Ms Yang points out the bottle that Zhou Enlai shared with some international leaders. We duck through doorways, pass a million litres of liquor, sleeping, barely breathing. 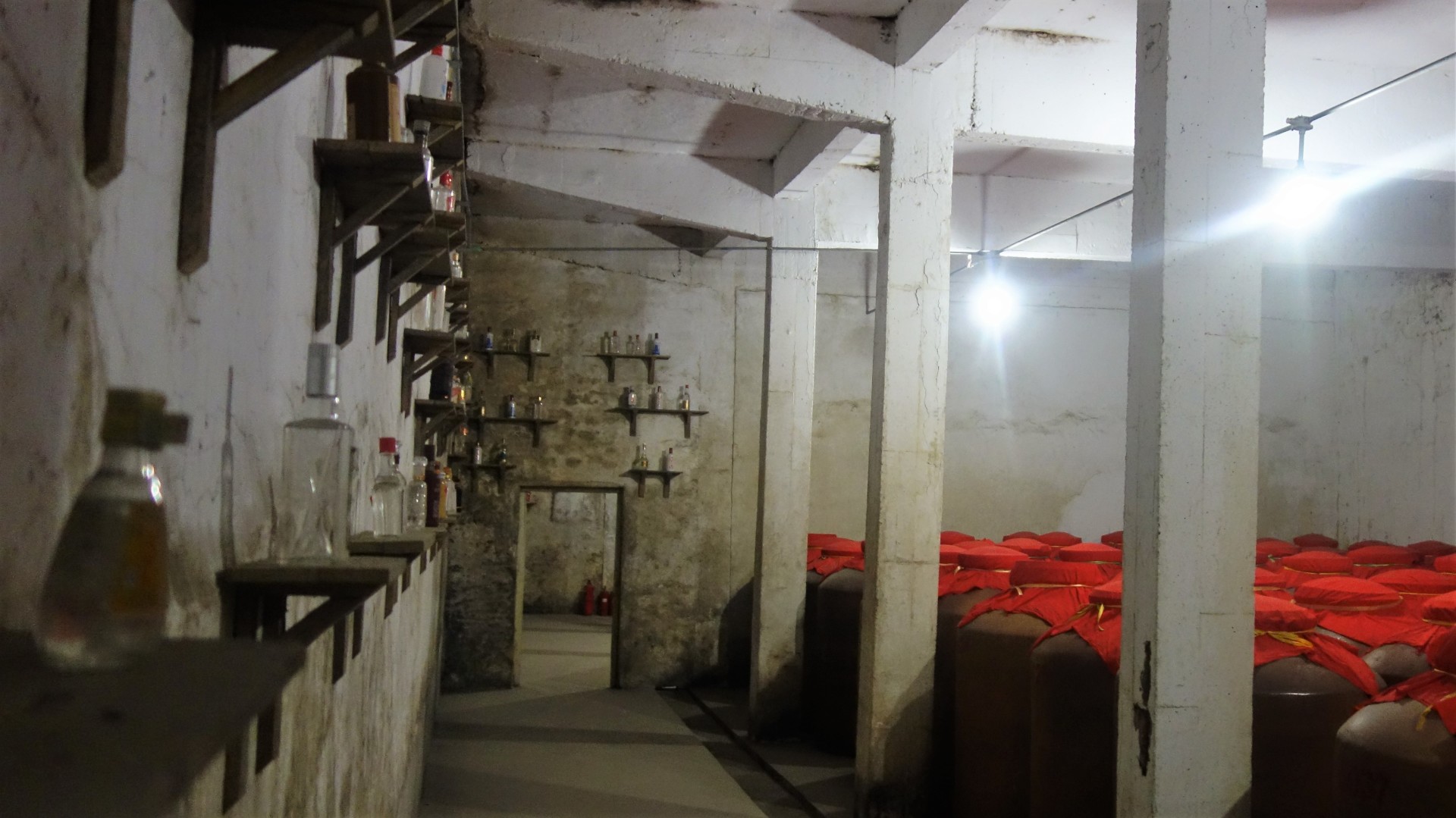 The entrance to the next building will be part of the visitor experience when it opens in the autumn. We push apart a pair of grand solid wooden doors that squeak like coffin lids. Steps, lined with information boards and selected display pieces, lead down below the ground into a dimly lit cavern. ‘Here’, she says, ‘is the largest cellar in Asia, kept at a constant temperature.’ The only light is from red lanterns that hang from the low ceiling in lines stretching into the spooky darkness. We walk between the tiers of jars and more ancient crates, our footfalls and voices deadened by the density of shadows. This building is more modern, but the air trapped in the never changing chamber feels as old and as dormant as the slowly aging wine. As if time is as entombed as the life force of the deer. 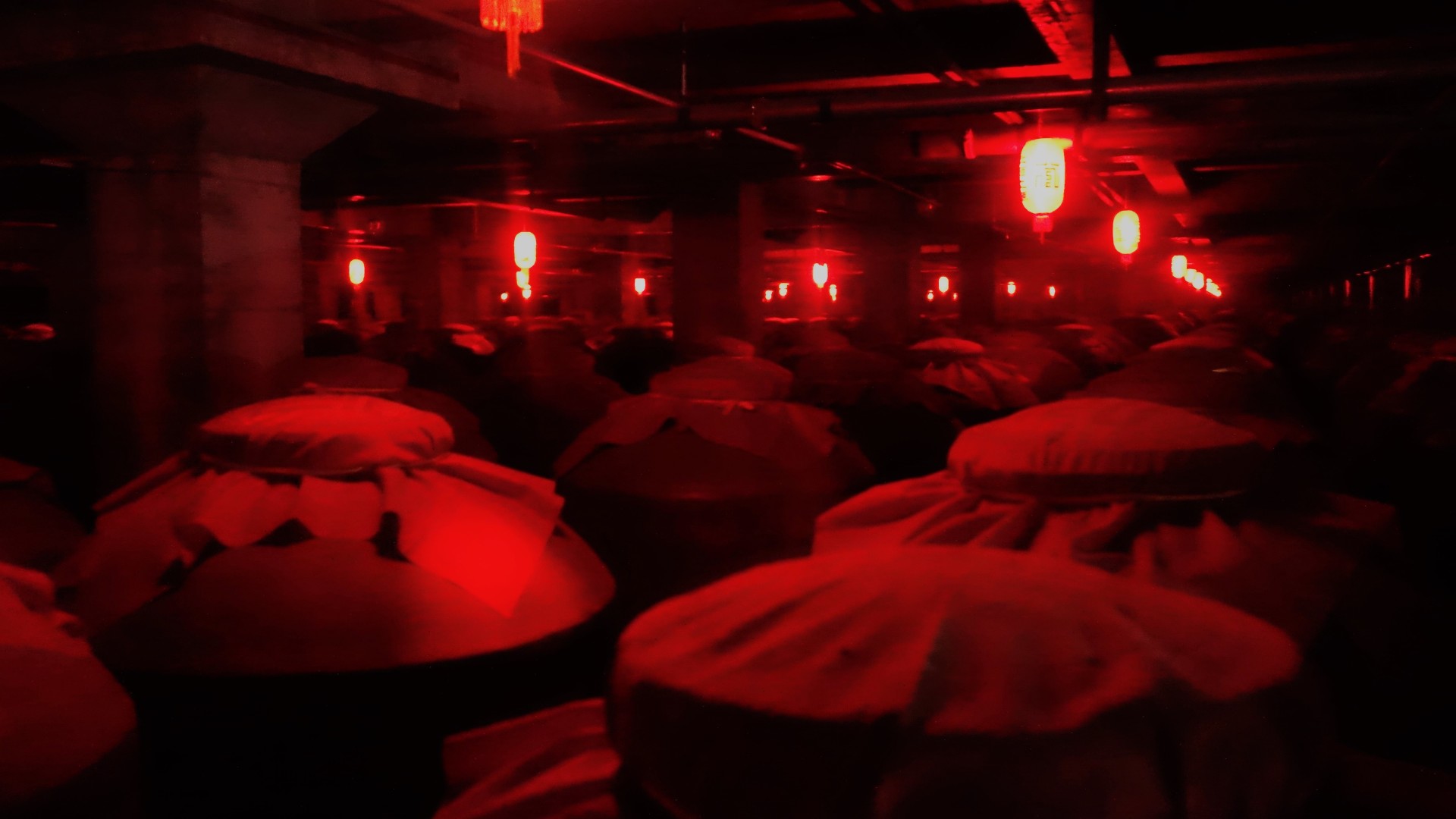 The coming multitudes, with their thundering footfalls, photo flashes and excited temperaments seem a sacrilegious introduction to this cloister. Its temperature will stay constant, but the atmosphere will change. I wonder if the disruption will disturb the spirt, alter the character of the drink.

We emerge into the final stage where two production lines send a steady stream of bottles along a belt to be filled, labelled then boxed by a team of workers togged out like surgeons. After the archaic fermentation practices and time trapped vaults, the fluorescent lights, the glass and steel machines and rumbling conveyers are a temporal displacement. Ms Yang underlines the incongruence telling me that the workers will be replaced by robots. The head spins – a journey in time, like the wine, thrust from a slow and simple past into a fast moving, high-tech uncertainty – overwhelmed by future shock.

Upstairs are offices and testing laboratories bristling with equipment. Its a reminder that this is a real business and not just a museum. That the romance and traditions of the ancient ways give the Tianjin Baijiu its character, but modern methods maintain quality and continued prosperity.

I leave with a sample bottle for the most important part of the process; its enjoyment with family and a sea food dinner. Three generations toast each other around the table. Journeys each taken through time to be here together; simple childhood days, a slow maturity, uncertain futures, united by the anaerobic bond of family. Let’s drink to the mud, to blood and to Baijiu.