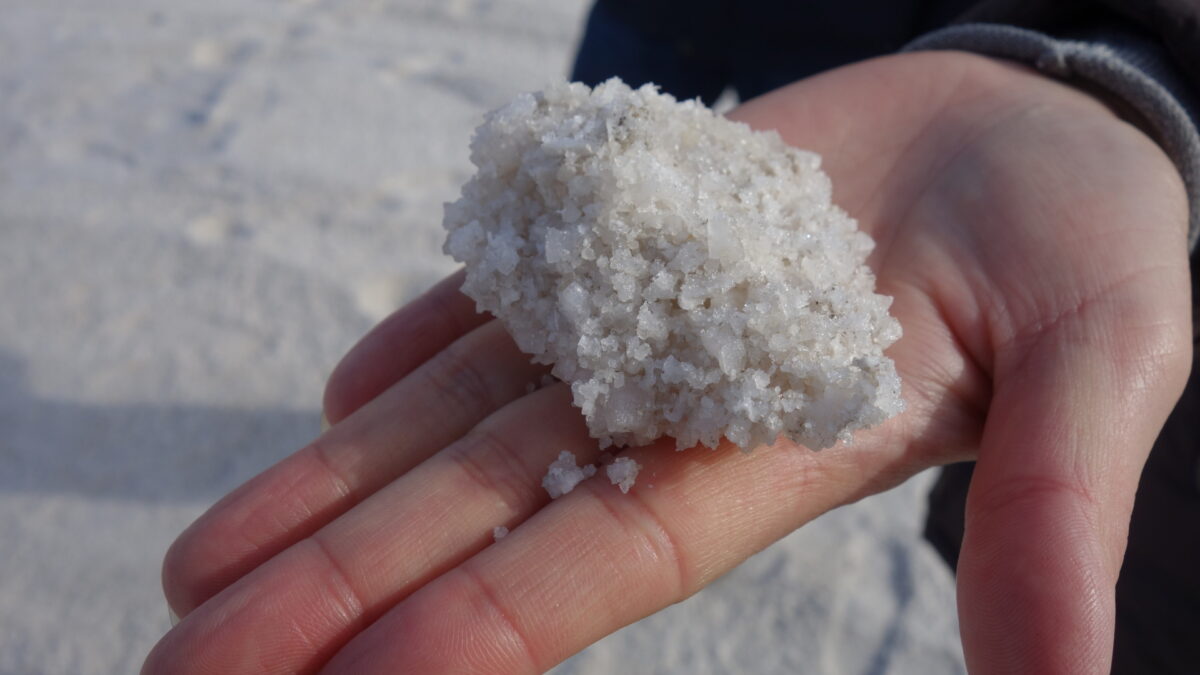 I’ve been out this way before, out from the city towards the sea. Driving out over the flat, low lands beyond Binhai and it still strikes me how featureless, how barren, how unforgivingly hostile this area feels. Last time it was towards an isolated village and its old fishing fleet moored at the water’s edge, this time it’s to the ancient salterns of Tianjin.

Like the fishing industry, Tianjin was once famous for its salt production. It exported, what Chinese proverbs call ‘one of the seven necessities of life,’ throughout China and beyond. It has been credited with being the driving force behind China’s social development because the huge tax revenue it created necessitated the organisation and administration to enforce, protect and collect it. Like the fishing industry, collecting salt from the sea is hard physical work, the environment is often tough and is a tradition in decline.

The flooding by the Bohai Sea and nearby rivers have made the soil in this region too salty for many plants. It explains the lack of trees and shrubs, the shortage of wildlife. It’s a harsh environment; fiercely hot in summer and bitterly cold in winter, unsuitable for farming or rearing animals. In the low lying ground the sea floods in and evaporates leaving a crust of salt behind. At the time of the Tang dynasty, salt was the biggest source of tax revenue and remained important well into the 20th century. 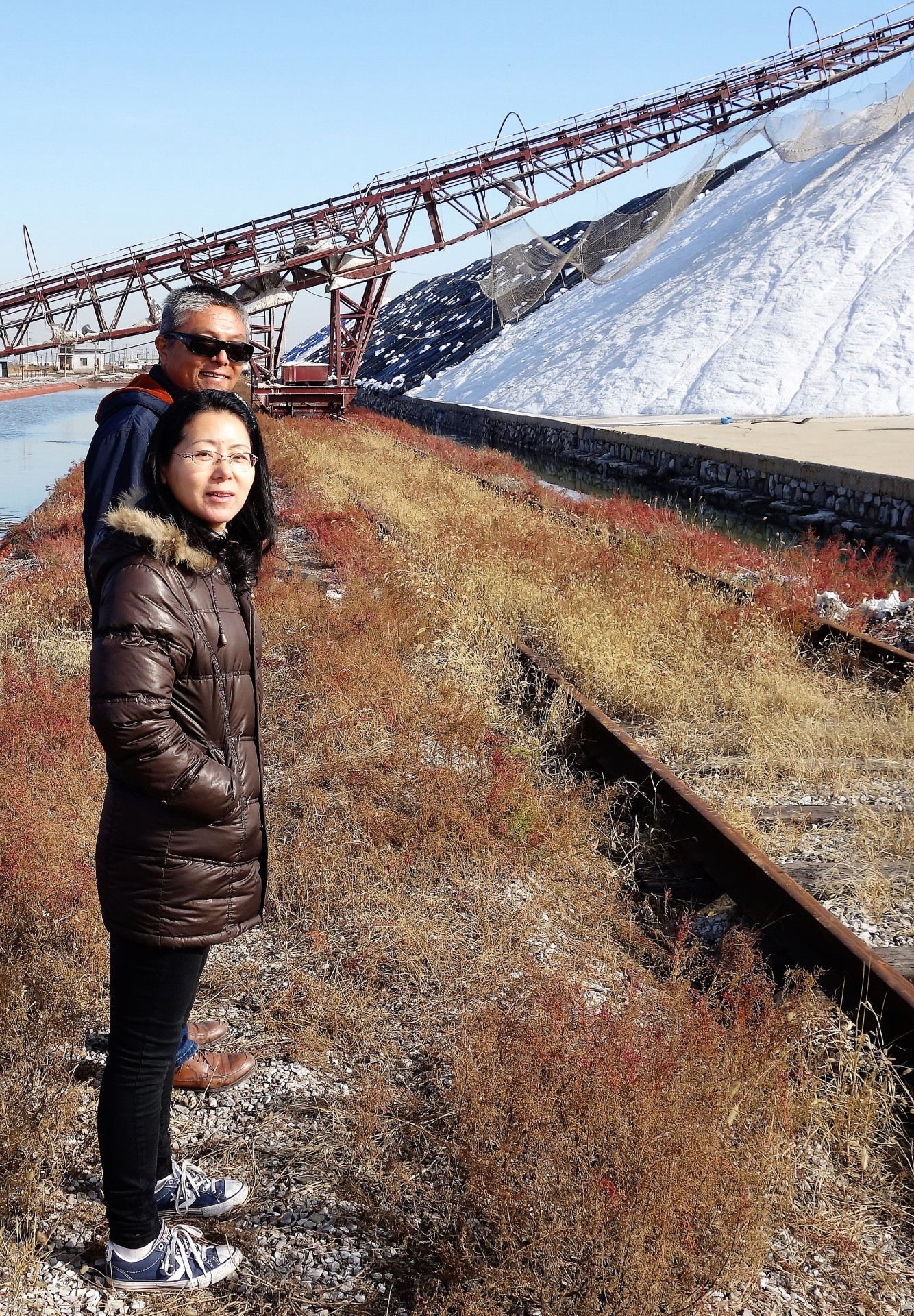 I arrive by car with Mr Liu, one of the product managers at Changlu; the largest sea salt producer in China. The company traces its roots back to 935AD. His family also has a long history of working in the industry. His sister, helping me with travel and translation, remembers growing up with thousands of other families in single story housing provided by the salt companies. She tells me the old village was pulled down during the 1980s and 90s, everyone was moved into modern facilities and the local schools closed. The Liu family story is typical of the families I met in the shrinking fishing village last year. The younger generations, now working in other careers. drifting away leaving the parents and grandparents behind. 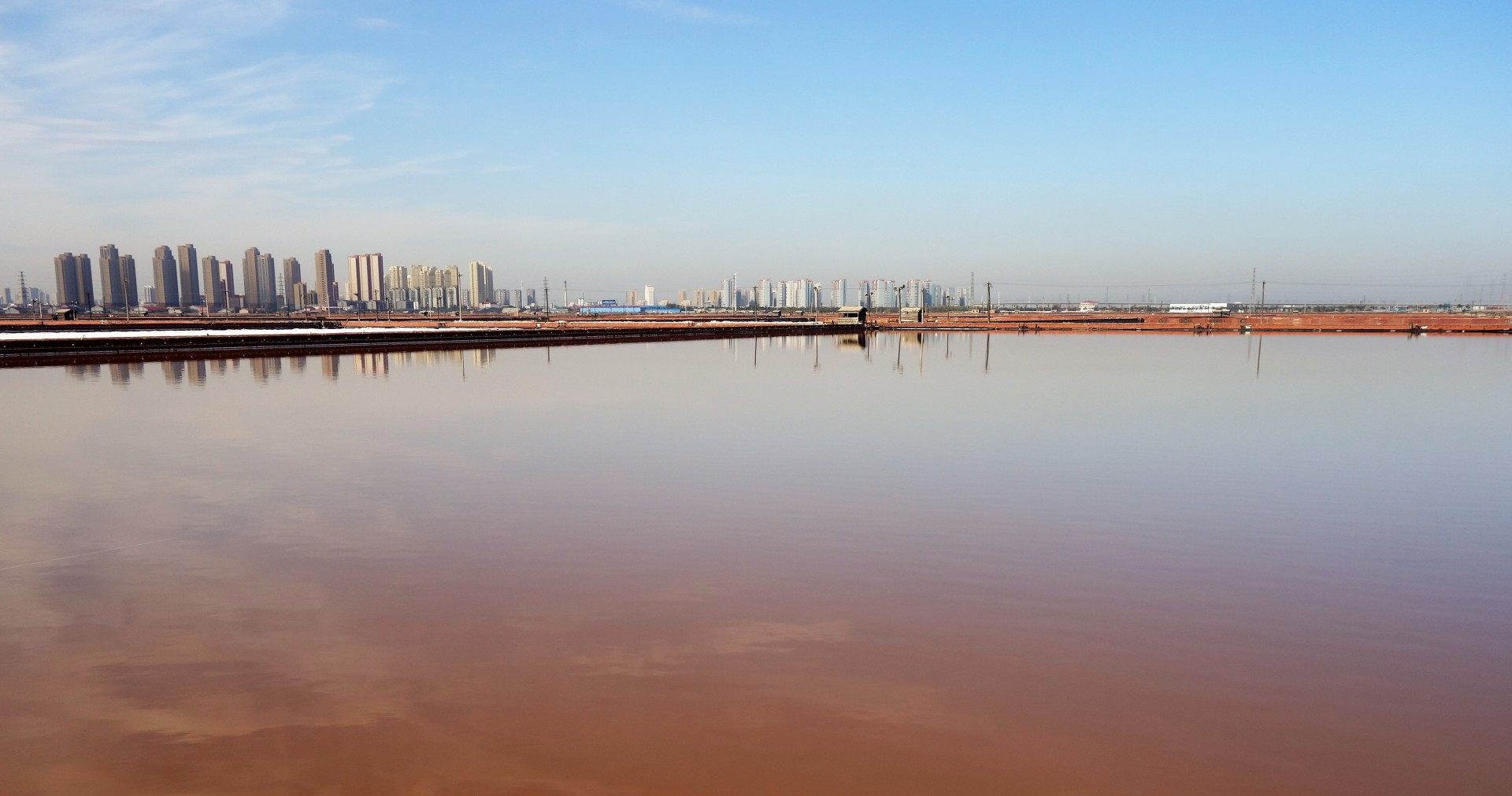 Today, though there are only 1 or 2 salt companies remaining, the landscape is still dominated by salt production. From the edge of the city, marked by the sudden halt of high rise apartments, to the distant sea and left and right to each horizon, are the mirrored waters of the brine ponds or the dried white deposits of salt. Each pool is ringed by rows of red bricks that reinforce the banks. The ponds are in different stages of production, those drained and dried of moisture a foot deep with the large crystals the area is famous for. Others are filled with the brine that will either evaporate naturally, or be pumped to drying machines to produce finer grains. 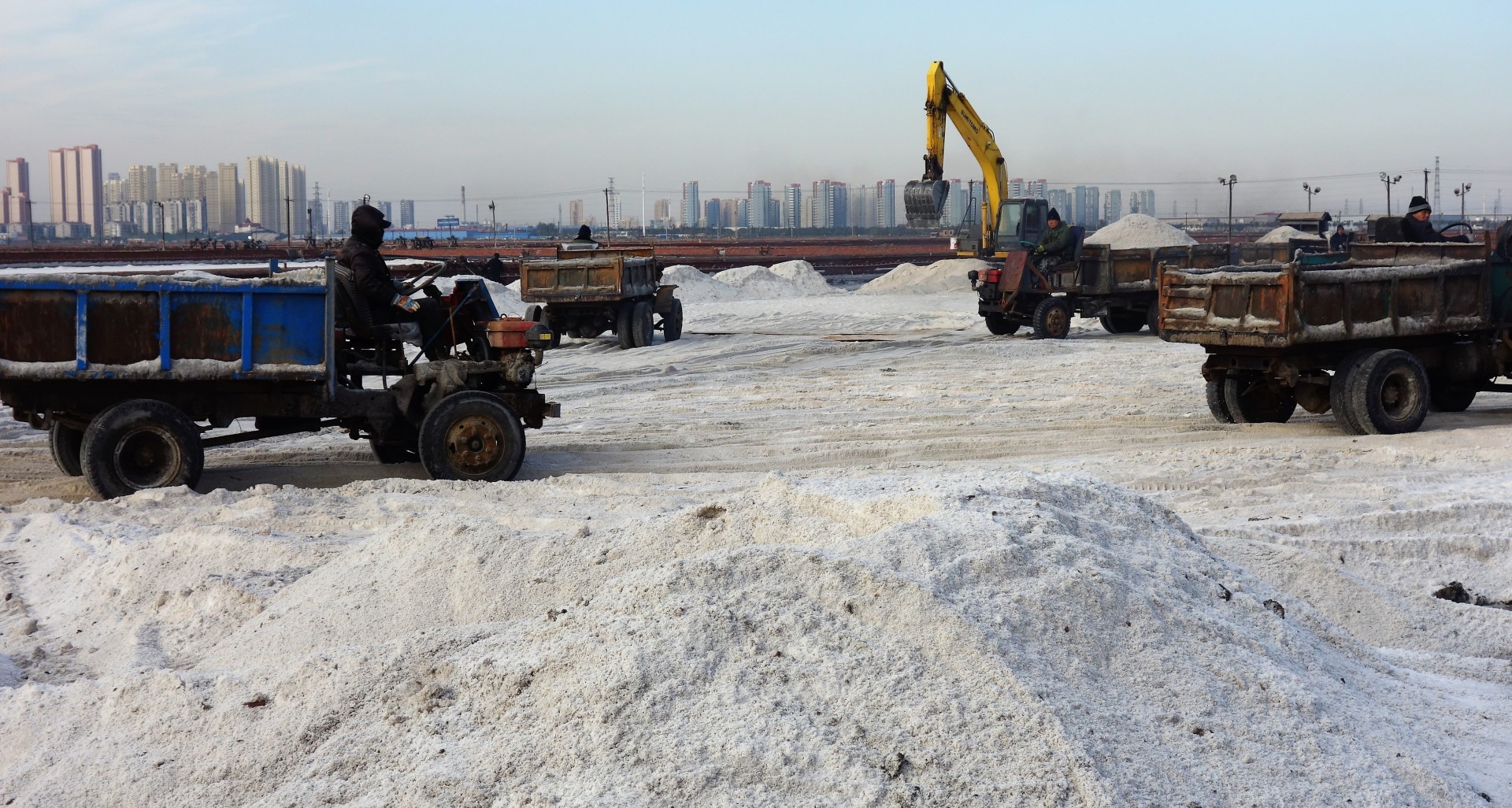 We climb down into one of the dried ponds and find the salt is surprisingly solid beneath our feet. Large patches have been scraped away to reveal the dark clay beneath. The extraction is being done by diggers and dumped into low trucks that speed continuously up and down the network of roads. The mechanisation has removed the back breaking work that was once done by men with shovels. 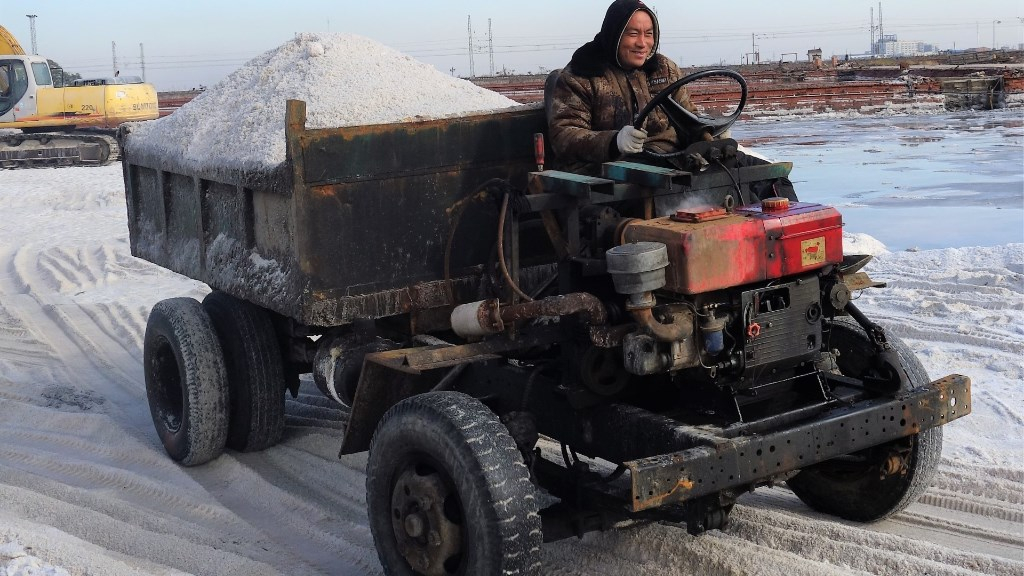 Although it’s warm today the drivers are well wrapped in scarves and thick coats, only patches of their skin showing. In the open trucks there is no protection from the Siberian winter winds whipping across the landscape and no shade in the sweltering summer. It’s unsurprising the workers are dark skinned.

In the trail of trucks we follow the freshly dug salt to where it’s dumped into a machine. The contraption is a web of belts, cascading water and whirling motors which shake and sort out the soil and stones. It’s a primitive piece of mechanics, but surprisingly efficient in producing a constant supply of brilliant salt creeping along a series of conveyors onto an already massive white mountain. 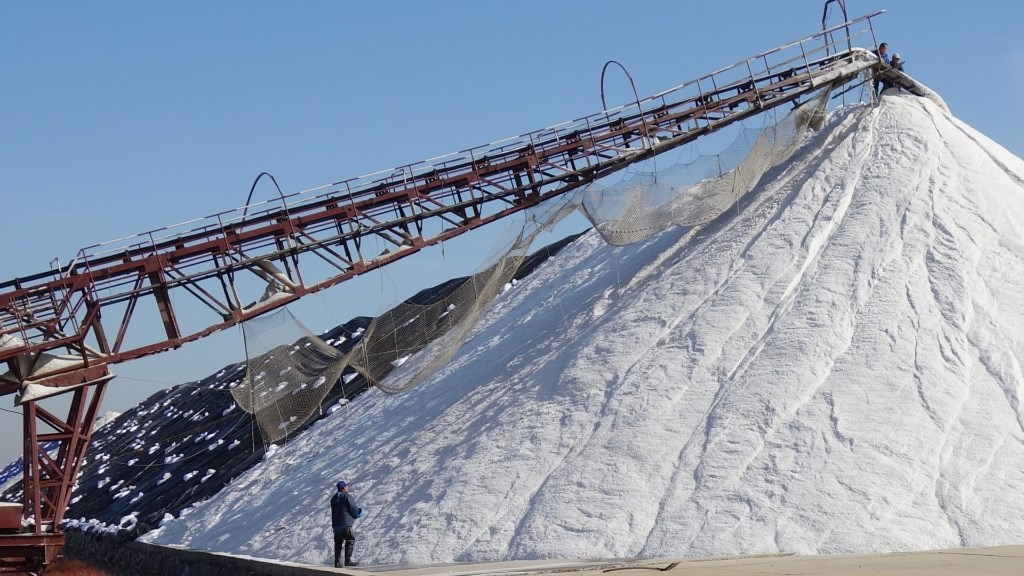 The principles haven’t changed. The sun, the sea and the flat land uses the same natural processes. The waste produced, no more than a stream of salty water which returns into Bohai bay and a small pile of stones and clumps of dirty salt that didn’t separate. A man is collecting some in a bag and I worry that this might be destined for some black market. But I’m told it’s used in traditional medicine as a type of poultice. 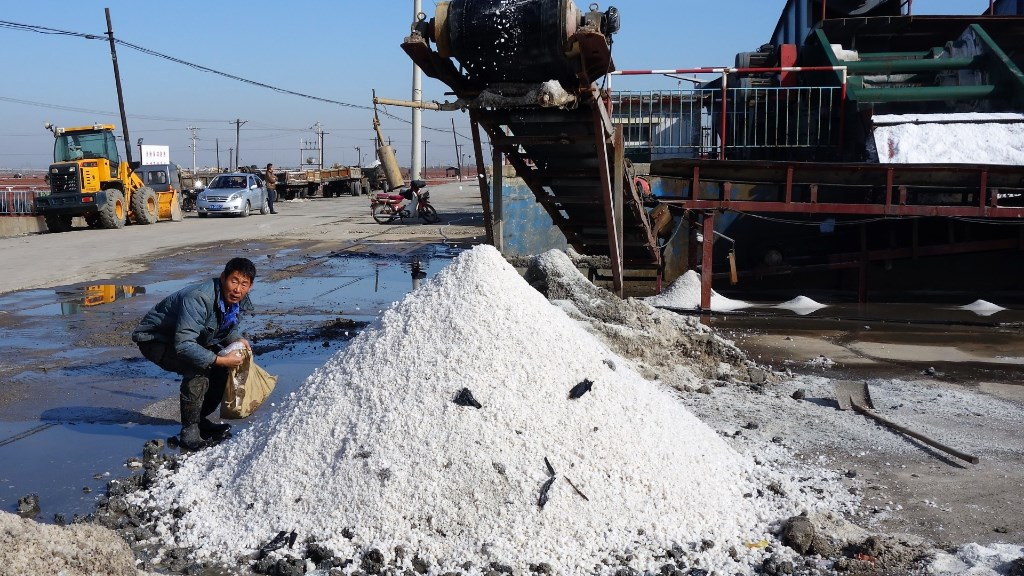 It’s hard to imagine though, how this area would have looked during the old dynasties when windmills pumped the sea water into the ponds. As well as the machines and the city standing ominously on one side, strings of thick electric cables stretch between long lines of posts. There are tufts of coarse dry grass along the rails that support the sorting machine, but mostly the ground is barren, poisoned by the salt spilled and churned into the road sides by the wheels of trucks. Before the mechanisation, the work would have required a mass of laborers rather than the few dozen visible today. The area produces over a million tons of salt a year but the tax revenue it generates is tiny compared with the factories and shopping malls steadily encroaching from the distance.

In the same way that fish farms increased the efficiency of fishing and helped in the decline of traditional fleets, so the mechanisation of the salterns has reduced the value of the salt industry. But just as Tianjin remains famous for its sea food, its cuisine has been left with a legacy of salt preserved vegetables and the generous use of salt in its traditional dishes. 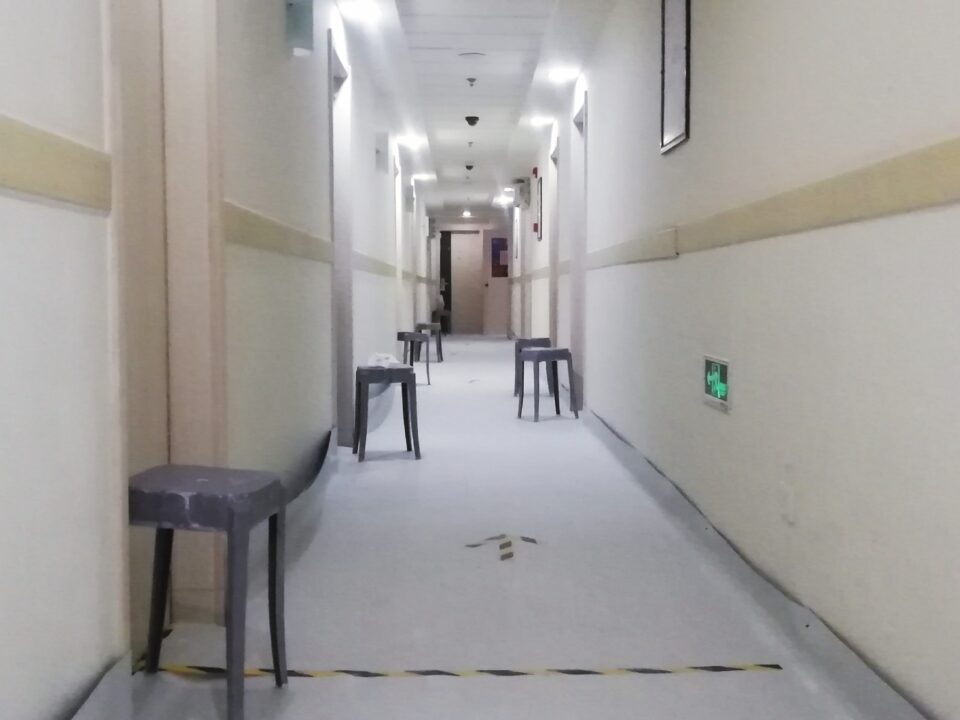