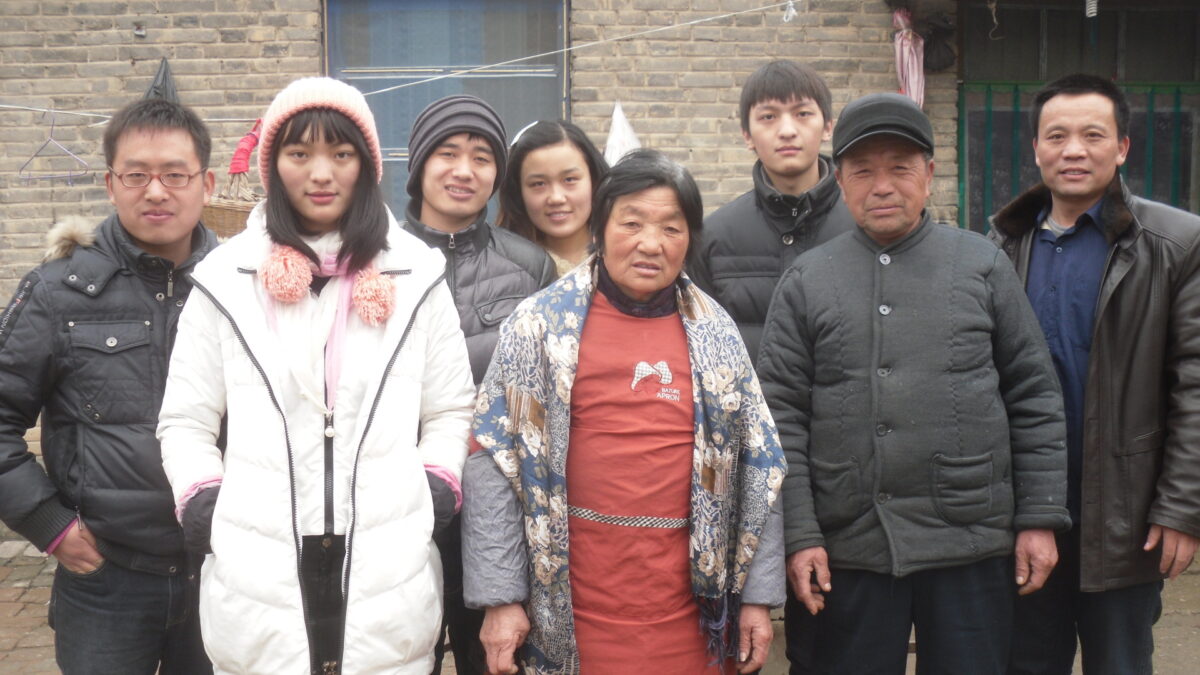 Just before the spring festival, my student Michael and his newly wed wife invited me to his hometown. It was a rare and privileged adventure of crowded trains and buses to an unknown town and a half abandoned village. I stayed a week with his family of 3 generations and with his old school friends who, like him and his young wife, are just starting out on their adult lives. I wondered about the changes during their lives and the unknown future ahead of them. Feeling we are explorers together.

His family live a few hours by bus from ZhengZhou in Henan province. I didn’t catch the town’s name, but like all places unprivileged by special status it’s a little grim. It’s uneven roads lined with open fronted shops and potholed pavements are all grey and crumbling as though made from dust.

His parents’ house is away from the main streets, down a maze of muddy, narrow alleys just wide enough for a single car to squeeze along. Our route twists between the unplanned housing, their tall ashen walls broken only by dull red doorways and scrawled telephone numbers. People stare, I’m the first foreigner to come to this town.

His house is next to a disused single-track railway line. At the moment it’s a convenient path cutting through the maze of back streets, straight and dry under foot. Soon, I am told, it will be ripped up and replaced by more houses. New houses. Not like the parents home, built by his father in the 1980’s, but like the modern block of apartments that peers over its roof.

The door from the alley opens onto a thin strip of yard. Flimsy double doors on the left lead into his family’s large living room. They greet me warmly; brothers, sisters, aunts and uncles assembled to welcome us with paper cups of boiled water. I wrap my hands around its warmth, inside the house is as cold as outside. I wonder why the door is left open. There is no fire, but the heat from the cooking in the kitchen could be trapped and raise the temperature a degree or two.

I think about the cold a lot over the days I’m here. I soon see that closing the door will do nothing when the windows are missing glass. There is no heating to make the house warm, there is no insulation to keep it warm and no rugs, coloured walls or fabrics to make it look warm or homely. Even the lighting is an industrial strip light, its cool, brilliance unshaded. The only warmth is at bedtime; sleeping, still clothed and with my head under layers of heavy blankets, or at meal times when we all huddle round the table in our coats and hats eating dishes of steaming meat and bread washed down with toasts of Beiju.

Later, we visit the village where his family lived before moving to the town. They have three homes in the village. Two of them stand empty, but in the other the grandparents still live. It’s traditional, standing in a square of courtyard edged by small outhouses and tall walls. A big blackbird flaps frantically in a cage and a joint of meat hangs on the washing line. As I work a hand pump, hens scratching around my feet, I fancy this is how the Chinese have lived for hundreds of years. Michael confirms the buildings are ‘very old’. I later learn this means barely 50 years. After a few pumps of the handle, water gushes out clear. I’m told it’s too polluted to drink. We walk around the village meeting only old people and babies. Everyone else, like Michael’s family, has moved into the towns for work and the more modern housing.

We eat lunch with the grandparents. More steaming dishes prepared in one of the dark outbuildings that is the kitchen. After the meal and rounds of the warming Beiju I look around the house. I imagine taking one of Michael’s empty homes and modernising it. I divide a room to make a small bathroom. Knock through a wall to join the kitchen. Build an extension for the sitting room with doors to open onto the courtyard in the summer. I add insulation to the roof, heating for winter and air conditioning for the summer.  It would be a lot of work, it would be expensive and the house would be small, but it would be beautiful – a traditional home of character.

On the last day I went with Michael to visit one of his school friends who had married the weekend before. They live in a modern apartment block and I am interested to see what Michael’s family now aspire to own. We climb up the dark concrete stairs to the 5th floor and are invited in through their solid front door. Inside is small, but certainly more modern. The kitchen is fitted with electrical appliances and there’s a little bathroom with a new shower and toilet suite. But the difference is not just in the increased security and the more recent amenities, it’s also the standard of finish; wires are hidden inside the solid and freshly painted walls, the windows and doors fit better in their frames and attractive lighting hangs from the ceiling. However, it isn’t any warmer. We sit in our hats and coats sipping boiling water from paper cups, as I had done in the village and in the back streets of the town. I wonder how different people’s lives in these three generations of homes really are.

Michael’s spacious house could easily be improved with a modern bathroom suite and a few kitchen appliances. A fresh coat of paint to the walls, some repairs to the fixtures and fittings. I realise none of the homes have ever been improved. They are as they had been built, hardly maintained, never decorated, barely personalised with pictures or even photographs, no ornaments or lamps to make them homely. I think of my own apartment block at the university and see the same mentality. The lock on the entrance door, broken months ago, remains unfixed; the elevator control panel has been re-attached with sticky tape. Outside is the same; holes left unfilled in the pavements, drain covers not replaced and the ornamental pools and fountains dry, or like the gardens peppered with litter.

Later, I discuss my thoughts about the lack of decoration, the absence of maintenance, the shoddy repairs. I ask their views on modernising old houses and their feelings for traditional style buildings. Their replies are practical and unsentimental. ‘Houses are not as important as the people that live in them,’ I’m told. To insulate and draught proof a house, to install a heating system and then to fuel it is a huge investment required just for a few cold weeks of the year. They put every penny towards food and security of the family, for education and future houses for their child.

Behind my own apartment, at the university, a city of gleaming skyscrapers is being built. Michael’s parents have bought a place, still under construction, for Michael and his wife. Stylish street lighting and newly landscaped verges border the pavements and fresh roads leading there. How long, I wonder, before all this is old and broken too. There is no culture to keep things current. I see there is little point maintaining something, when all around it is allowed to slowly crumble. Education of their children is a more solid investment for a brighter future. Everything else in time becomes grey and dust.