China is notorious around the world for its high levels of security and surveillance. The streets and building exteriors bristle with CCTV, inside, even apartment blocks elevators and public areas have cameras.  When I first arrived in China as a teacher at a university here, I didn’t think it was possible that they could all be monitored until I saw one of the security rooms packed with display screens all being video recorded. China has an abundance of unskilled workers and watching a few dozen TV screens all day in return for a small salary and a uniform is easily affordable. So too is placing guards on access gates to companies, living areas, banks, shopping malls, bus and trains, subway stations and parks. It is so common to see people in uniform that its easy to imagine the police are everywhere.

These simple roles are mostly done by private security firms, their uniforms are similar to the police but they have little actual power themselves. Even so, they ensure public safety and order is maintained through their hotline to the real police. They have very little training.  Many are old men, happy to sit in the foyer of a bank all day, or young girls and boys who casually wave a metal detector at you as you enter a subway. The security industry must employ tens of millions of these people, it’s not unusual to see half a classroom’s worth of young security staff at a subway entrance. Their deterrence isn’t in their ability to chase you, or restrain you, but in the extension of authority they provide. The manning of the cameras and scanners and the eyes, ears and voice of the government on the street.

As well as the security staff, it’s not unusual, especially during important events and around Tiananmen square, to see the presence of the army. A pair of soldiers standing to attention at a subway entrance or in an underpass below the highway provide added deterrence. Despite the ubiquitous presence of authority, there is little interaction with any of them. This is also true of the police. With only 1.6 million police officers, around 1 per 1000 people, they are only half the numbers of the UK police force.  Outside of registering your details of where you live, or in sensitive areas your ID at checkpoints, you are unlikely to cross their path. Even the Chinese people prefer not to get them involved and will try to settle problems among themselves. In the 15 years of being in China my contact with them has been little more than as administrators. But there are three tales that show something about what they do.

The Case of the crazy consumer

My first encounter with the police was witnessing an arrest at the local shopping mall. A woman was ranting loudly in Chinese and a crowd had gathered to watch the unusual scene. About 4 policemen arrived and tried to calm her down. Its not clear what she had done, she had no shopping bags, perhaps she was just mentally unwell. It was surprising to see them spending time talking quietly to her while videoing the whole situation on a mobile phone. I had expected they would wrestle her to the ground and drag her away into a van for a good beating. So I was surprised at the amount of time, patience and professionalism they exercised. I was very impressed.

The case of the lost camera.

A second incident occurred while on holiday in Guiyang. I had left a camera on the back seat of a car shared on the return from visiting a village. Unable to contact the driver I went to the police. Its quite surprising how little memory we have of recent history I had no idea of the cars make only that it was a 6 seater and was even uncertain of its colour. I had however been dropped at the side entrance to the hotel directly in front of a line of traffic cameras which I thought could identify the car. The police drove me to another station where at the top of the building there was a room full of tv cameras. Unlike the university office which had been a lone guard watching a bank of old CRT monitors this room had rows of computers like NASA mission control and a flat screen wall where their screens could be displayed.  I thought of taking a photograph with my phone but this room too was covered in cctv cameras. I suspected this would be unwise. One of the workers pulled up the images of the cars at the time we had paid the driver identified by the Wechat transaction. The images were photographs and it wasn’t possible to clearly identify the car.

I went for evening meal and had resigned myself to the cameras loss when around 11pm I got a phone call from the police saying they could look at some other cameras. I wasn’t hopeful as over seven hours had now passed. Even if the car was traced, he would have given many passengers a ride in that time and anyone could have taken it. But I thought I should go especially as they were waiting for me outside the hotel.

They drove me to another police station this time the room only contained a single PC, the technician pulled up a difference camera. This one appeared to be located above the hotel looking at the hotel main entrance rather than to the side where we got out. However, even though the video we were seeing was from 7 hours earlier the image was able to be swept 90 degrees around to point in the right direction. Although the images were clear the car was partially obscured by a tree but it could be seen pulling away and turning left. The police followed the vehicles progress along the road through subsequence cameras until in one view of the approaching vehical  the number plate and front passengers could be seen. I cautiously agreed it could be them.

The police office went away and came back with a print out of the driver. We compared it to his wechat photograph. Two pictures of a Chinese guy taken a few years apart one formal full face the other a picture taken against the background of a scenic view – maybe they are the same person.

He called the driver who said he remembered me but had had several other passengers since then. He went and checked his car and unbelievable found the camera still sitting on the rear seat. The police took drove me to his house to pick it up and we all posed for photographs outside laughing and smiling. 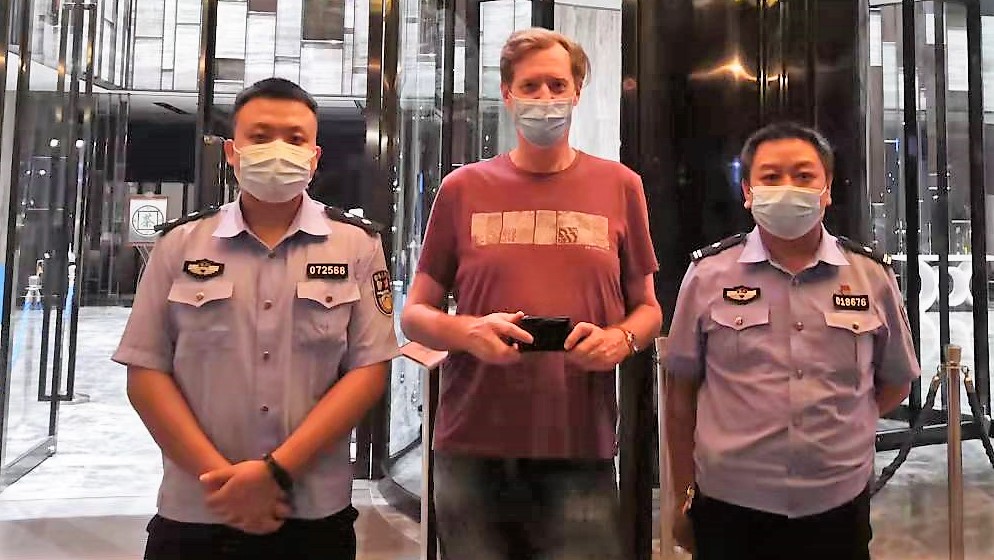 The case of the placated local

In another small city during the same holiday, I had less successful experience.  I had tried to book a tour to the local river gorge but the travel agency was closed. Next door a restaurant owner offered to drive us there and back for 100RMB. It seemed a reasonable price and unusually asked us to pay up front. We agreed to meet him at the end of the street while he went to get the car. While we were waiting, we checked information about tickets only to find there wasn’t enough time to catch the last cruise. Returning to the shop he refused to refund us all the money so we called the police.  The policeman arrived after about 10 minutes and listened to the Shopkeeper and a Chinese companion and a growing crowd of people who occasionally joined in. After some time the police asked if we had had a corona virus test, we showed him the test certificates. He said if we cannot resolve the problem we would have to go to the police station and do a more recent test performed.

As tourists the wasted time is not worth the money involved nor the principle. I’m sure he was aware of this and keeping good will with the locals is probably the safer choice for him. It is quite possible they even know each other.

These three stories say a lot about China. In each, the police show how, despite the low numbers of officers,  they are able and willing to dedicate a large amount of time to very minor incidents.  Clearly there is little serious crime to investigate. A second impression is the professionalism and humanity applied, even in the politically sensitive trouble spots of Xinjiang the police were friendly, talkative, even apologetic about the administrative checks they have to apply. There are things that the Chinese system can be criticised for, concerns about the possible abuse of surveillance, but the positive side is a society that is very safe and free of conflict. 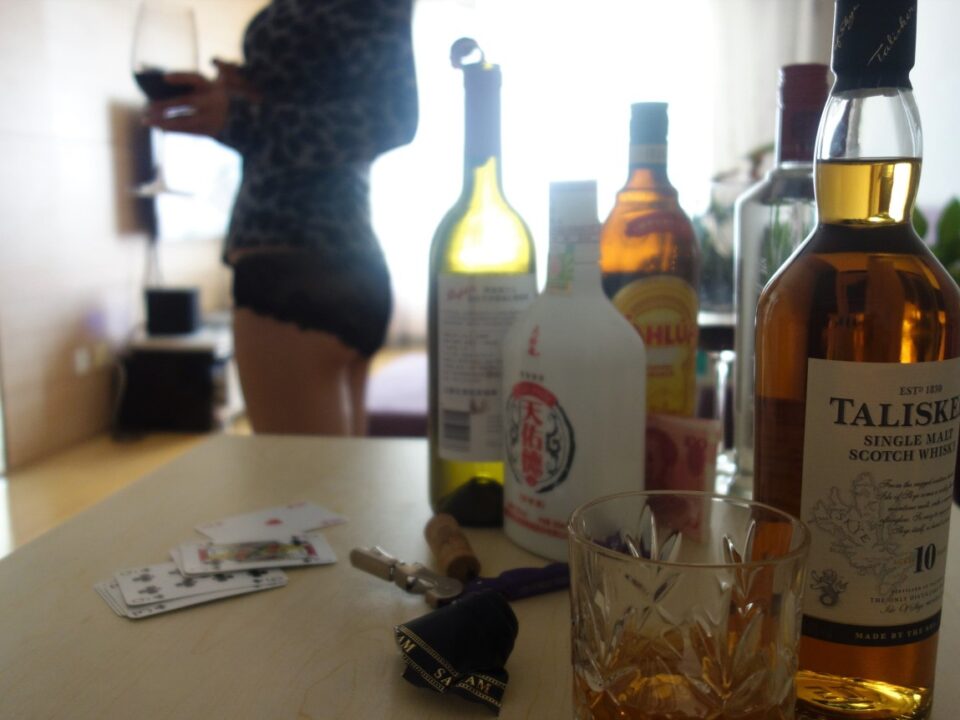 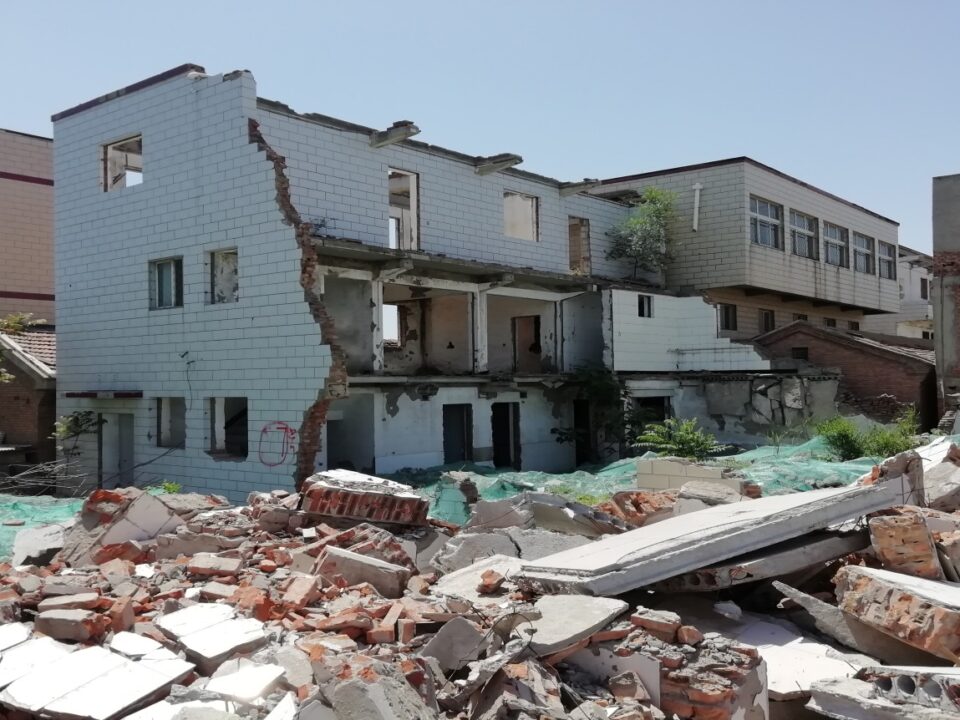